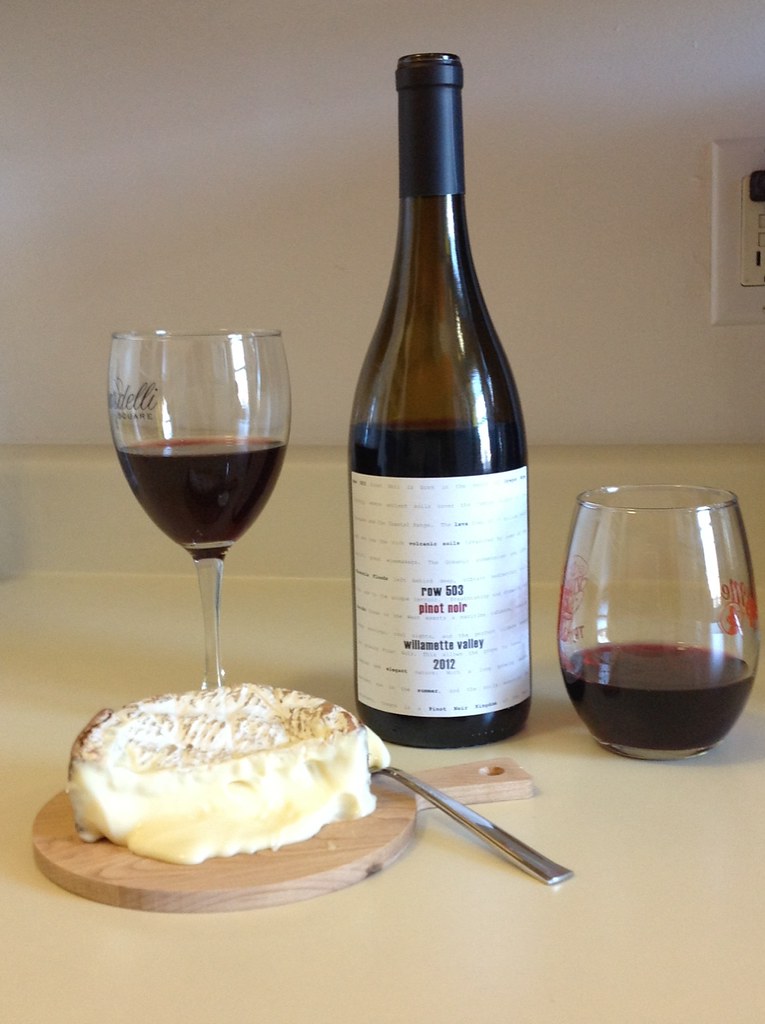 When we visited the Rainbow Market cheese counter, we were given a few different samples to try. (http://www.rainbow.coop) We tasted the Jasper Hill Harbison cheese and I thought it would pair nicely with a Pinot Noir. And we were in luck because we got an extra bottle of the Row 503 Pinot at the BevMo 5 cent sale. (http://www.bevmo.com) Let the pairing begin!

This is the same Pinot Noir that we used last weekend during the ZinZig game but we wanted to give it another try since it’s from Willamette Valley in Oregon and we are unfamiliar with wines from this up and coming region (http://willamettewines.com/about-the-valley/). This Pinot was not as pink as other Pinot Noir’s, it was a little darker in color. While we were swirling the wine, I picked up raspberry and savory aromas while Neil found plum and cassis. As far as flavors I identified some vanilla, noticeable alcohol, and some spice popped up in a later sip. Neil noticed a strong spice, plums and wild cherry sweetness. The wine also seemed tart and dry to me. It was okay, but not my favorite.

We read an article, http://winefolly.com/review/write-excellent-wine-tasting-notes/, during our Wine and Cheese time and found out that the fruit scents and flavors in wines are primary aromas, due to the grapes used. That same article said that vanilla is a tertiary bouquet from aging in oak. Many of the wines at work are aged in oak, so I am familiar with the vanilla reaction that occurs when the wine is being aged. 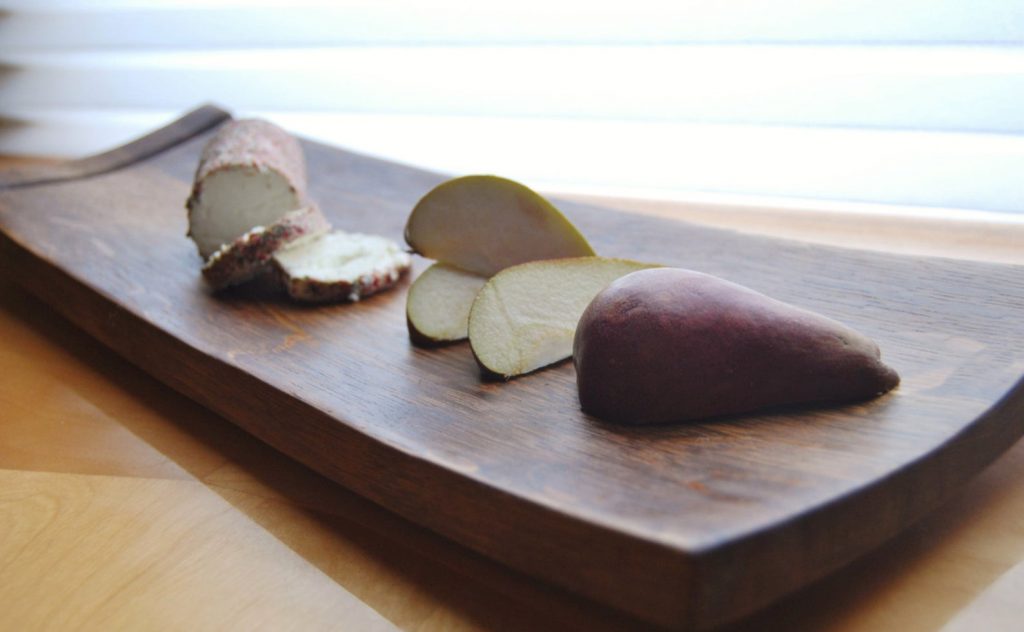 Speaking of aging in oak barrels, there are so many creative ways that oak barrels can be reused. Take this cheese tray for example, it’s pretty to look at and will remind you of those oak influences in your wine. Want to get one for your next get together? Click this link from our partner, Etsy (US).

This cheese was a pretty distinct one! Neil’s first reaction was that it smelled like garbage and it was so wet and creamy that it oozed right out of the rind. This seems like a rough start but it turned out to be one that we both really liked. I thought it smelled like wet mushrooms and a little “woodsy” and Neil said it was So Funky. The super soft and creamy texture reminded Neil of cheese sauce and he described the flavors as earthy and grassy, almost herbaceous. I kept picking up different flavors ranging from smoky, salty, oak, and cedar to tangy, sweet BBQ, almost like vinegar. What a complex cheese!

During the wine and cheese pairing, we both noticed the wine to get sweeter, and according to Neil “more sweet cherry-ness.” I agreed with the sweetness but also picked up some earthiness in the wine when paired with the Harbison. We found the cheese to be affected by the wine too. For me, a new flavor appeared that reminded me of cheddar cheese. Neil said this wine and cheese go well together in order to counterbalance one another. I would say the pairing was good and thought it was cool that the new cheese flavor appeared but probably wouldn’t drink the wine by itself. We’ll need to try another Pinot Noir from Willamette Valley so we can get to know this region a little better.