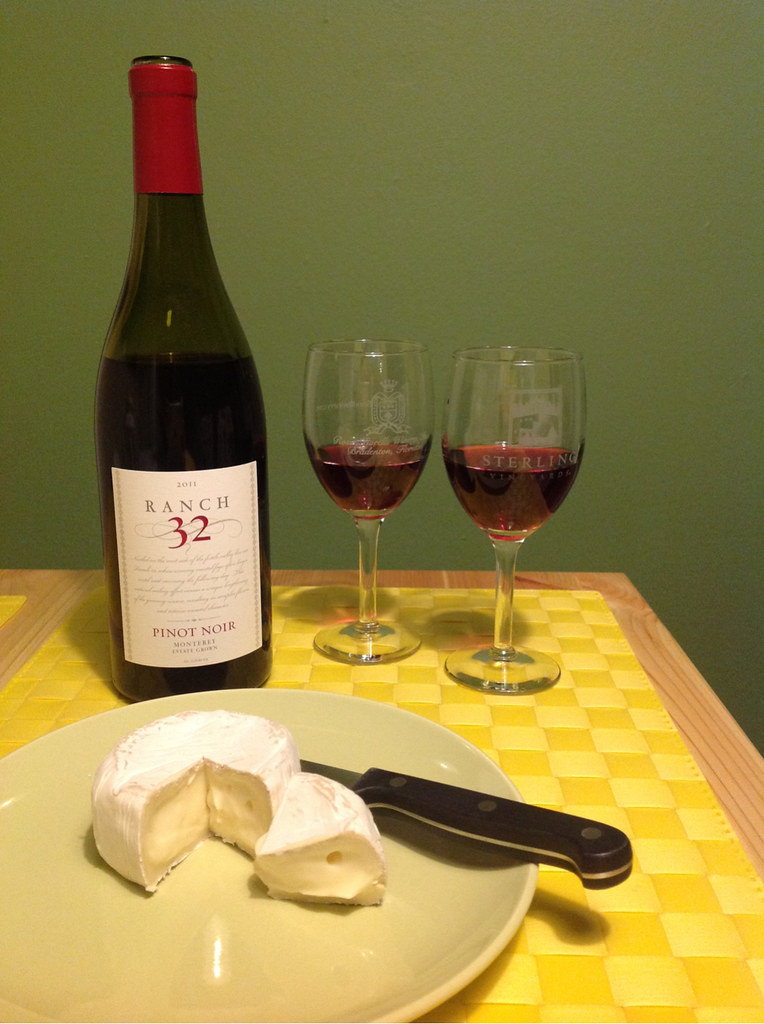 Pinot-Vember continues this week with a Pinot Noir and Petite Blue Triple Cream cheese both purchased at BevMo. (http://www.bevmo.com) Since there was a “5 cent sale” going on, I cheated a little by reading the descriptions of some of the wines. During the “5 cent sale” you get 2 bottles of the same wine, so I wanted to be sure it was one we would be interested in.

We started our wine tasting by swirling and sniffing the wine and found many aromas. I identified a hearty and sweet scent but Neil discovered many fruits, including blackberry, raspberry, and black cherry. As we tasted the wine, I found it to be light with fruit flavors that danced on the tongue. Neil said it had a full flavor filled with many berries, a light spice and hearty herbs. He enjoyed how it lingered nicely and reminded him of a living forest! I told him he was spot on because the description in the store said it had dried leaves. Great job Neil!

In order to choose this weeks cheese, I went back through our previous wine and cheese pairings to see what we’ve done.
(http://mferraro73.tumblr.com/post/50311926739/pinot-noir-and-pont-leveque-cheese-5-10-we-are)
(http://mferraro73.tumblr.com/post/46997403195/pinot-noir-and-gruyere-sunday-march-24-things)
We haven’t had any Pinot Noir pairings since the spring and unfortunately I didn’t like either of those cheeses so I guess we won’t be revisiting those.

The cheese we decided to try was a cheese by Marin French Cheese, called Petite Blue Triple Cream. (http://www.marinfrenchcheese.com) This was definitely a soft cheese that Neil called creamy, mild, a little funky and slightly salty. I found it to be smoky, tangy and salty but a little too soft. It was challenging to eat.

When pairing the Pinot Noir and Petite Blue, I thought the wine brought out the funk of the cheese, and the cheese increased the spice and fruit of the wine. It was pretty good. Neil agreed it was a good pairing because both the cheese and wine were mild and pleasant. He also picked out a beef flavor during the pairing that surprised him.