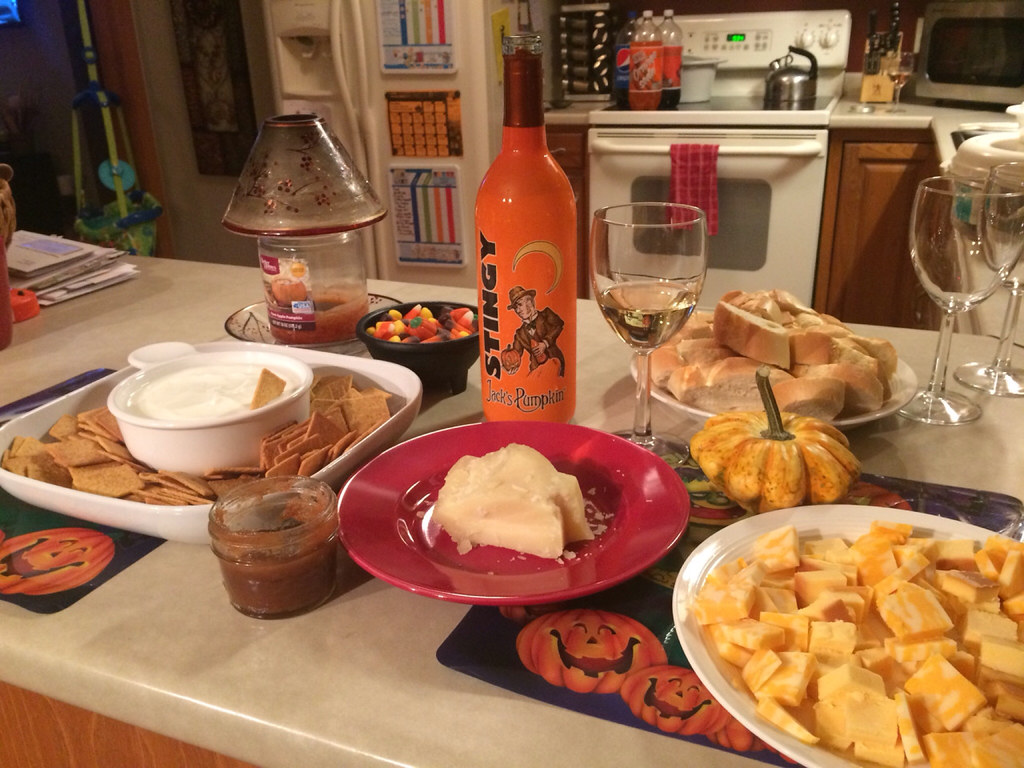 As a Halloween treat, we will be pairing Stingy Jack Pumpkin wine and Fromage blanc. A few weeks back, while visiting the Big E Wine and Cheese Barn (http://www.thebige.com/ese/), I found this pumpkin wine. How could I resist, I am here to celebrate all things related to Fall. Do you recognize this cheese? We made it last week with my niece and nephew, http://mferraro73.tumblr.com/post/131751540308/making-goat-cheese-with-lexi-and-alex-as-you-may. This is another team wine and cheese tasting so please welcome my two brothers Tom and Vin, along with their better halves Liz and Koren and my mom, Betty, to taste with us.

Having no idea what a pumpkin wine would taste like, we consulted the back label. This is a grape wine with pumpkin and spices added, produced by Les Trois Emme Vineyard Winery, LLC in Naples, NY. (www.stingyjackwine.com) It also explained the myth about Jack O’Lanterns on the back label, what a fun story!

Now onto the aromas that we noticed in the wine. As with many group tastings, we identified some expected and some unexpected aromas. I felt that it smelled like squash or raw pumpkin. Neil agreed with a pumpkin aroma and added apple butter. Tom was reminded of the muscadine dessert wine that he tasted with me when I worked for Rosa Fiorelli Winery (https://www.fiorelliwinery.com). Liz picked up clove aromas. Koren noticed a sweet aroma as well as apple cider vinegar. Betty didn’t find it to smell like pumpkin at all and Vin was reminded of the aroma of an ashtray.

As we tasted the wines, Koren, Liz and I all picked up flavors of clove. Koren also made note of the tart finish. I could taste a pumpkin flavor but it was more like a raw pumpkin or squash. Tom and Neil both tasted apple and Neil added that it was “musky”. I’d guess that’s why Tom was reminded of the muscadine wine. Liz and Tom both noticed a sweetness too. Vin was still over in left field, coming up with a flavor of “the cologne in a JC Penney Catalog.” Needless to say, he didn’t like it. Neither did Betty, but she’s convinced that she doesn’t like white wines.

If the wine wasn’t strange enough, it was time to taste the mysterious vat of cheese. In order to taste only the flavor of the cheese, I handed out a spoon to everyone and instructed them to take a scoop and let me know what aromas or flavors they noticed. Just about everyone said that the cheese had no scent, except Vin who said it was like a pillowcase. Not really sure what that aroma would be? Moving onto the texture, runny and smooth. I’d say that this turned a lot of us off and we weren’t too excited to move onto the tasting portion. Well let’s just say that imaginations ran wild when describing the flavor. A few of the guys and girls turned red with embarassment and Neil and I just said that it tasted like salty goat cheese. There was no question that we must have added too much salt when making it. Betty simply said “Not good, Thumbs Down.” We convinced a few people to put the cheese on a cracker and add some apple butter. That seemed to help a little but there was a ton of cheese left.

Well let’s see how the pairing of Pumpkin Wine and Fromage Blanc. It can only get better, right? Neil seemed to think so, the pairing reminded him of crème brûlée! Vin disagreed, he said it smelled so bad and tasted like he was licking the inside of a clamshell. All of us siblings had an ocean theme going because the cheese reminded me of getting a big gulp of salt water when you are swimming. And Tom said it was like a conch shell! Koren felt that the wine was really peppery and it even reminded her of a red wine. I definitely agree that the wine was more tart and spicy. Liz said the wine wasn’t as sweet and she noticed flavors of pumpkin and cinnamon. And Betty said the wine tasted better, so I guess it was a split decision on this pairing.

After the pairing we all really needed to cleanse with some bread. There were a few takers on more of the wine but nobody wanted the cheese. Koren thought the wine would have tasted better if we cooked it and added mulling spices. Sounds like a good idea! I had a chance to taste the wine again a few days later with a baked ham and the flavors had lightened. It was a pretty tasty pairing. I guess we’d all recommend trying it around the holidays but drink it with your feast, not on it’s own.