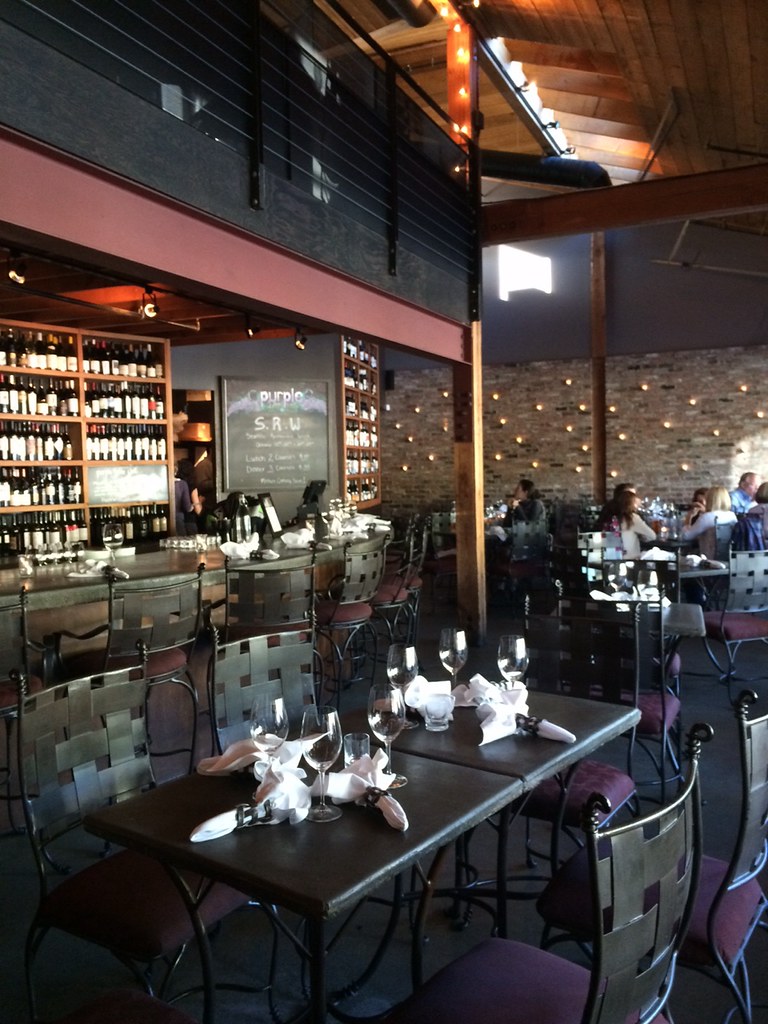 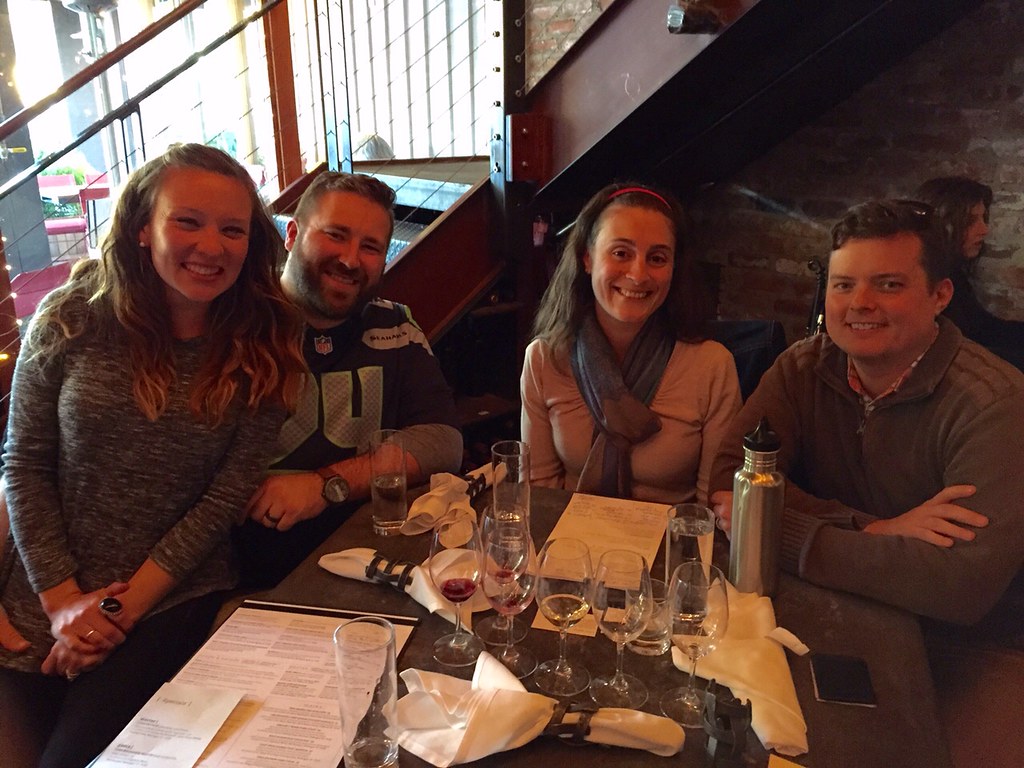 We took a trip up to Washington last week to visit our friends, Jordan and Kyle in Bothell, WA. Haven’t heard of that town, well it’s right next to Woodinville, WA. (http://woodinvillewinecountry.com) Since we were in the Washington Wine Region, we felt it was necessary to do some wine tasting. Our friends said they had never gone wine tasting, just “wine drinking.” We found a wine bar near their house (http://www.thepurplecafe.com/locations.html) that carried a bunch of local wines.

Since they had never gone wine tasting, we had a “Sip and Learn.” We passed each wine around the table while explaining the 5 S’s of tasting: See, Swirl, Sniff, Sip and Swish. We let them know that although you don’t have to do this for each and every sip of wine, it does help to slow down and appreciate the wines. They asked if it mattered which wine we tasted first and why. We told them how wine is usually tasted in order of light to heavy so that your tongue doesn’t get saturated and you can still appreciate the flavors. Then we told them that after they do the 5 S’s, they should tell us what aromas, flavors or colors they notice. And if it just smells/tastes like wine, that’s okay too, since it is a strange concept to ask what something tastes like when you just start wine tasting.

Let’s start tasting so we can figure the rest out as we go!

The Local began with a rosé, although it was a “white flight.” Jordan found the wine to be good and a little sweet. Kyle said it was sweet enough to drink. Neil enjoyed the floral aromas of the wine and thought it tasted like watermelon or maybe tangerine. I thought it smelled light and had fruit flavors, a tartness and softness, and maybe a wood flavor.

Up next was the Forgeron Cellars Chardonnay. After we passed the wine around the table once, we waited to see if either Jordan or Kyle noticed butter since Neil and I both did. Although they didn’t, we explained how many Chardonnays have the butter flavor from the interaction of the wine with the oak barrel. Jordan was surprised that the wine was not as dry as other Chardonnay’s she’s tried in the past. Kyle did pick up an apple aroma and found it to be a little sweet and tart. He also noticed the finish of the wine, since he could still taste the flavors in his mouth after he was done sipping. Great job! Neil was reminded of apple butter while tasting and I noticed more of a caramel flavor. I guess we all had autumn on the mind.

Jordan is usually a fan of sweet Riesling wines but we were told that the Pomum Riesling was a dry Riesling. Neil smelled the wine and wondered if anyone else picked up the rubber hose aroma, luckily they didn’t. He decided that although he did pick up some pear, it was too acidic for him. Jordan was excited to identify pear as well but didn’t like this Riesling. I noticed aromas of mineral which is probably why the others didn’t like it. The flavor was light and had a hint of apple.  Kyle described the texture as soft. Since Jordan usually likes a sweet Riesling, this was probably a good wine for her to try to show the range of this grape.

Then we moved on to the red wines, beginning with a Syrah. Neil is pretty familiar with Syrah’s, so he was happy to point out the smoke, blackberry and blueberry flavors. I found it to smell smooth and have fruit aromas with flavors of cherry and blackberry. Kyle was surprised to notice that it tasted like grapes and smoke. The transition from white to red may have been too intense for Jordan because she thought it smelled like alcohol and was really dry. She did like that it matched her nails though! I liked this wine and commented that it didn’t taste like smoke to me, there’s those differing palettes again.

I think it was around this time that we all discussed the fruit flavors of wine. They were wondering if fruit is added to wine to make those flavors appear? We explained that many things contribute to the flavor including commercial yeasts, the grape itself and other chemical reactions involved. Always so much more to learn about wine!

The 2013 Betz Family Winery ‘Cuvée Frangin’ was a blend of Cabernet Sauvignon, Merlot, Petit Verdot, and Syrah. This seemed odd to me because it would be similar to a Bordeaux blend with the Syrah from the Rhone region added. Well apparently the group didn’t really like the combination, they picked out flavors of alcohol, tannins and it was Dry. Being the odd man out, I thought it didn’t have much of an aroma but it was dry and smooth. Oh well, more for me.

We finished out with the Final Final by Efestē, which went over much better. Jordan said it was not nearly as dry as the other reds. Kyle thought there was also less of an alcohol aroma and he identified fruit and more flavor. Neil found aromas of plum, prune and a dry flavor with a light spice. I agreed with the prune aroma and called the wine, light and tannic. Much better reviews from the group as a whole but I’d prefer that first Syrah.

After tasting the six wines, I was surprised that I didn’t notice an underlying flavor or characteristic for these Washington wines. I guess we’ll just have to plan a trip back to visit some wineries. There are so many according to the Woodinville wine website, we were just short on time that day.

Its always fun to share the experience of wine tasting with friends, especially those who want to learn more about it! Thanks for joining us (and putting up with us) Jordan and Kyle, we’ll definitely go tasting next time we are in town!