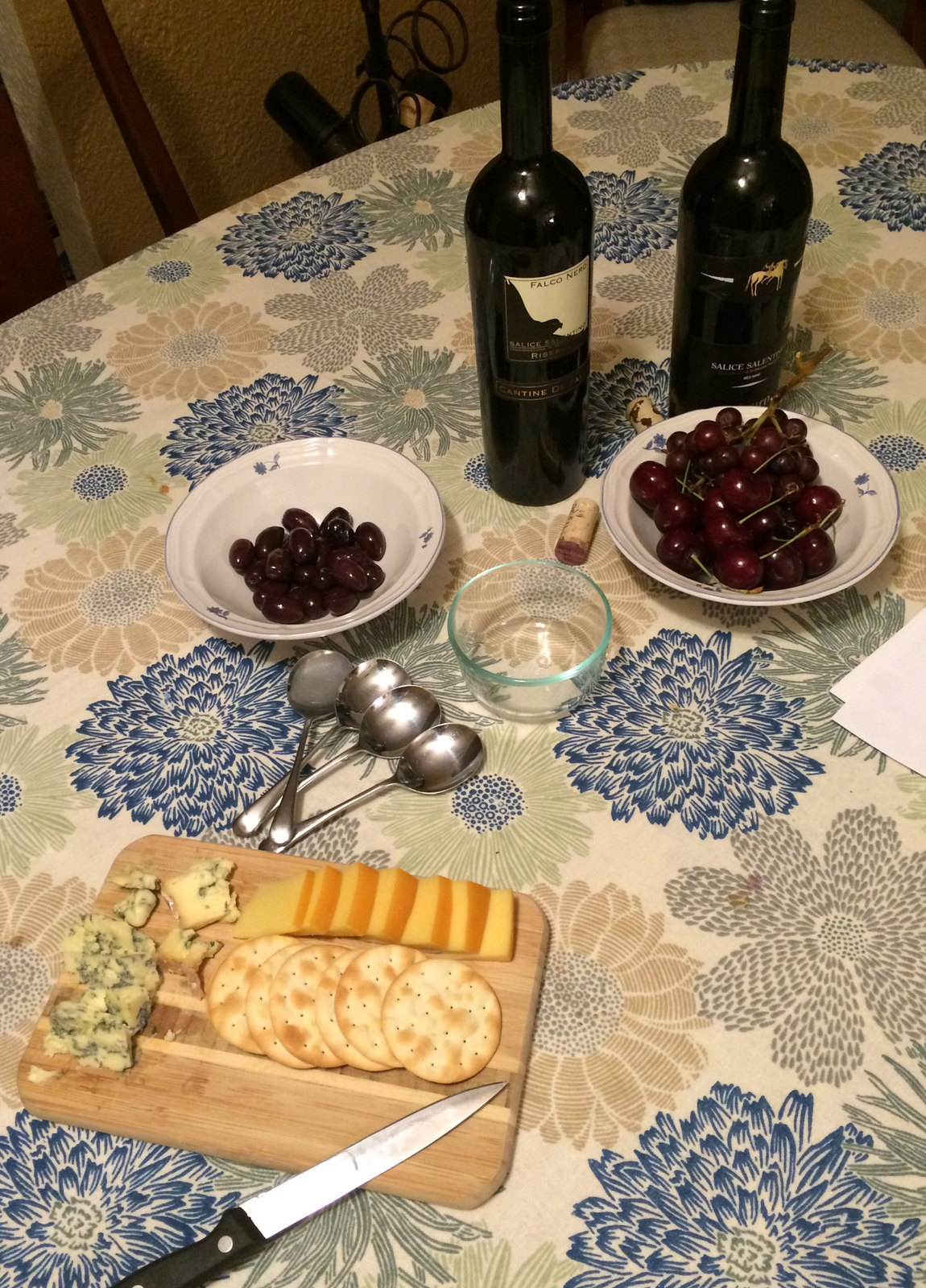 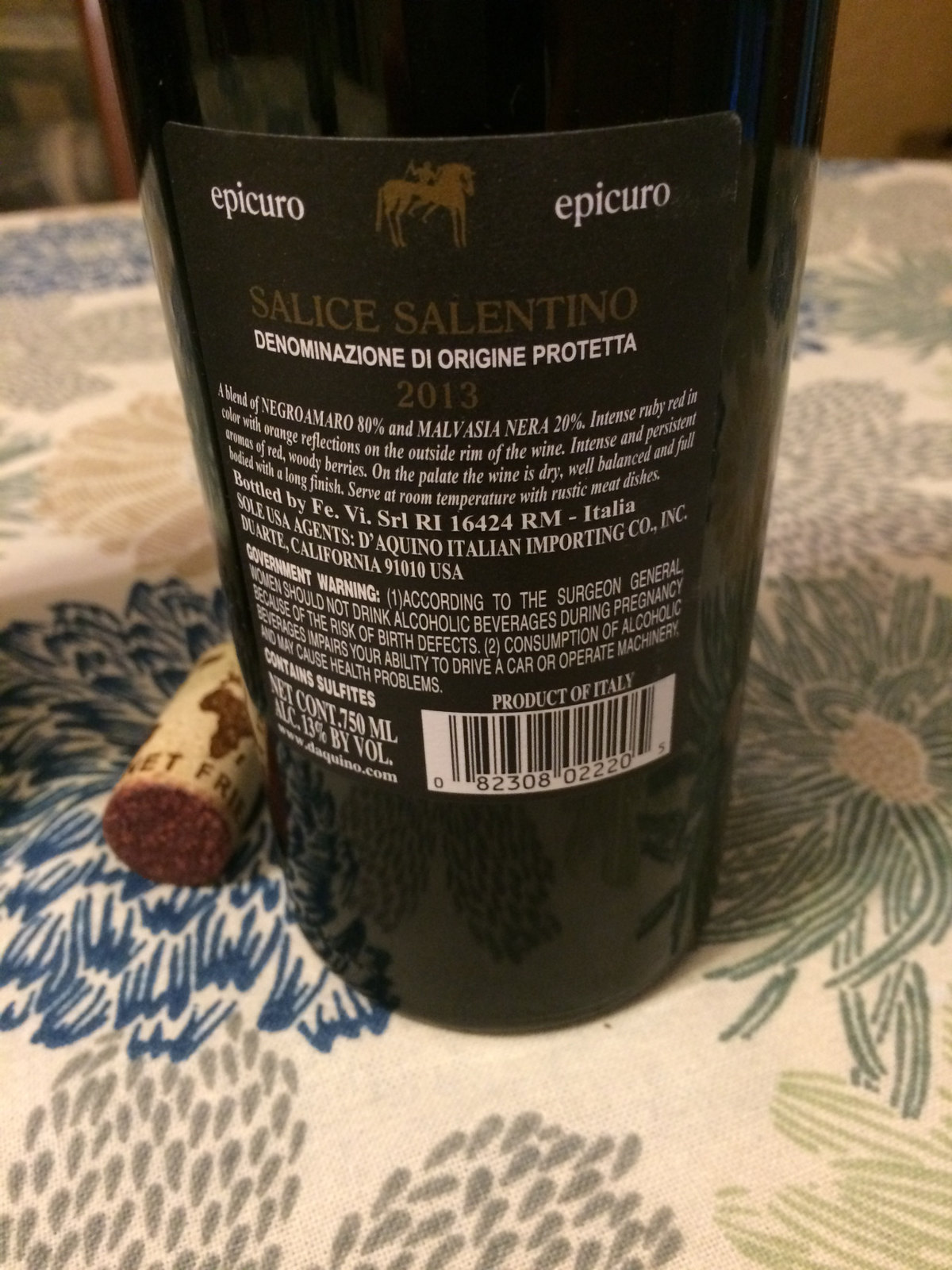 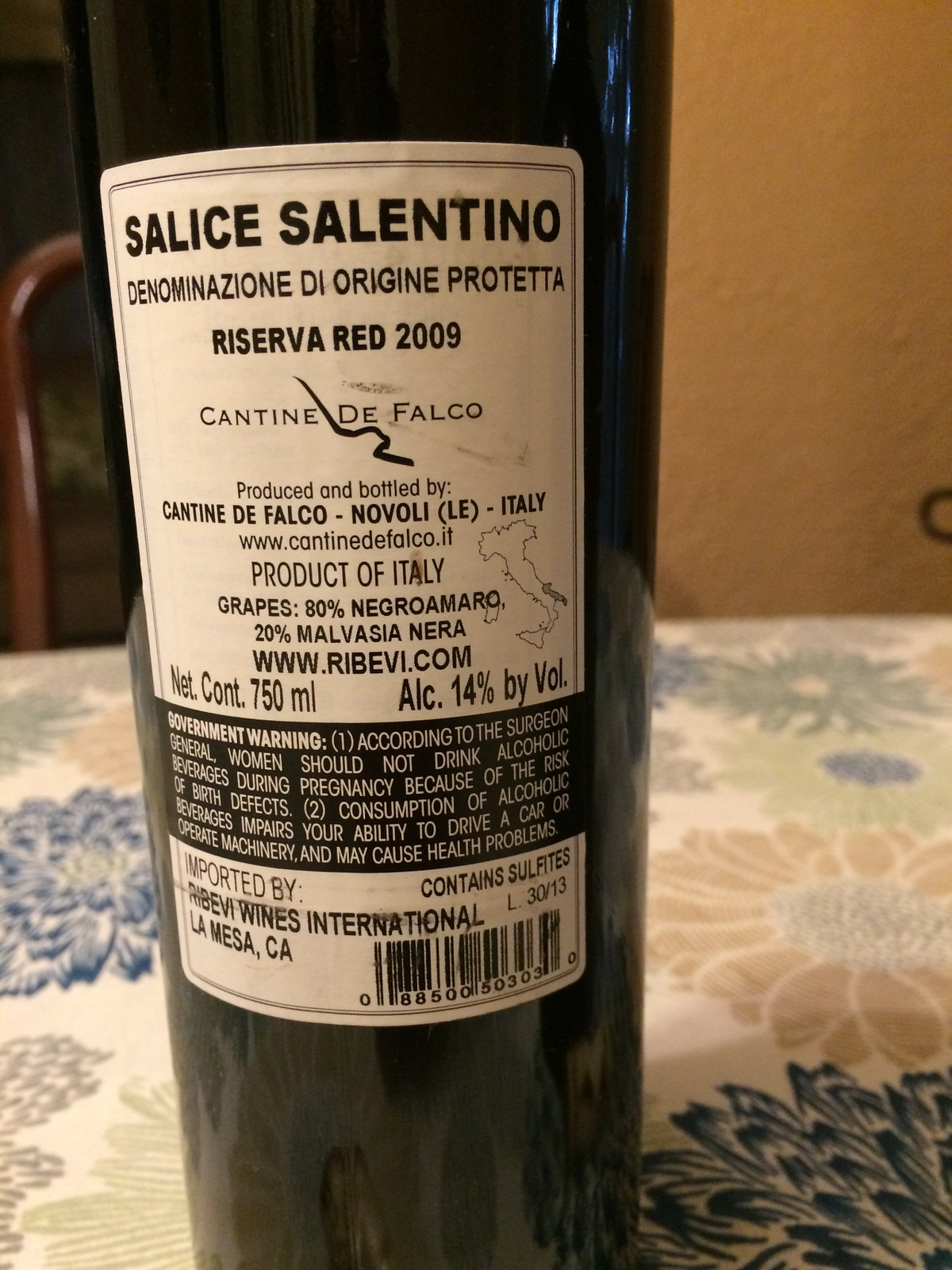 This week’s WineAndCheeseFriday entry stemmed from curiosity, like most of our entries. The first time we tried Salice Salentino, it was a bottle we had picked up at Trader Joe’s since it was an inexpensive Italian wine that we didn’t know. We decided to have it with dinner and found it to be a very easy to drink wine. We had it a few times more until I decided to feature it in my “Search for an Inexpensive Dinner Wine at Trader Joe’s” entry, https://wineandcheesefriday.com/the-search-for-an-inexpensive-dinner-wine-at-trader-joes/. We knew we liked it but until then had never really taken the time to write tasting notes.

Around Christmastime, we had the opportunity to purchase a case of mainly Italian wines through the Sommly app (https://itunes.apple.com/us/app/sommly-wine-app-shop-for-finest/id1006255080?mt=8). Neil is a co-founder of this app, so this was his chance to finally try some of the wines he kept seeing the images of when developing the app. We came across a bottle of Salice Salentino that we figured would be fun to taste given our experience with the Trader Joe’s version. Well then it occurred to us to try them side by side to see how similar or different they might be.

Before describing our tasting experience, I decided to research the wine a little more since I pretty much only knew that it was an Italian wine. Both bottles were listed as “Denominazione de Origine Protetta”, and whether you speak italian or not, you can probably recognize that this is a protected wine region, similar to those that exist in France. This wine region is located in the heel of the Italy boot, https://www.google.com/maps/place/72100+Brindisi,+Province+of+Brindisi,+Italy/@40.9707621,14.9861251,8z/data=!4m5!3m4!1s0x13467a3bc980ec6d:0x110cef7cc03daf9!8m2!3d40.6327278!4d17.9417616, that is known for producing negroamaro grapes. These wines are mainly made of negroamaro but can also include a small percentage of malvasia nera grapes, which both of our wines did: 80% negroamaro and 20% malvasia nera. This region historically had a bit of an inferiority complex from the northern and central regions of Italy who tout that they produce the real wine of Italy. Although Salice Salentino is more commonly known for jug wines and inexpensive table wines, I’m happy we decided to learn a more about it.

We invited our neighbor Val over to help with the comparison. Her friend, Jen, came along too, bringing our tasting group to four people. Val also brought some fruit, olives, crackers and cheese for palate cleansing and enjoyment. Thanks Val! We discussed where we purchased each wine and went over vintage, wine region, varietals, etc., before the tasting began.

Since Neil and I were more familiar with the 2013 Epicuro Salice Salentino from Trader Joe’s we began with that bottle. We started by describing the wine aromas, which were mainly fruits: grapes and cherries. Being the nature girl that I am, I always find the earth elements, including earth and rock aromas but Neil did pick up the aroma of loam. From our initial swirling, we expected the wine to be dry but once we tasted it, we were all pleasantly surprised that it was smooth. There were more fruits and rocks listed in the flavors including blackberry, cherry, slate, limestone and “rocks in the finish.” Although our first few sips were not dry, there was a dry finish that became magnified as we continued to drink the wine. Jen found it to be a great value at $6.99 and pretty good flavor right off the bat! She took a photo of it to look for it on her next trip to Trader Joe’s.

Next we sampled the 2009 Falco Nero Salice Salentino that is still a bargain at $9.99. We took a break from naming all kinds of rocks as we swirled this wine. Instead we noticed a spice that Jen thought was similar to chickory but Neil said it was more like cherry rock candy. I had to confirm that this is reminiscent of winter holidays and cinnamon since I never tasted cherry rock candy. In addition to the spice, I also noticed prune, blackberry and some earth aromas. We all described the texture differently: dry, smooth and light. That’s why it’s always fun to do wine tasting in a group, we’re all different! When comparing the two, Neil said this one had a single cohesive flavor that seemed to come together well. As Val sipped her wine, she was kind of sad and said it just reminded her of a higher alcohol, table wine. Then as she tried it again, she identified a hint of apricot and cranberry-grape which made her think it was just on the acidic side, not all that harsh.

Although we didn’t officially pair these wines with the cheeses, I still prepared some tasting notes for you. The smoked gouda tasted smooth, mild and had a hint of smoke. The stilton was also smooth and smoky but let’s not forget creamy, salty and funky. Yum! Jen had never noticed new flavors when pairing wine and cheese so she was pretty excited to see that happen. She said that after the stilton, there was more fruit in the 2009 Falco Nero Salice Salentino. Happy to share the WineAndCheeseFriday experience! We even noticed a few changes when we paired the wines and fruit. Neil tasted a cherry and then the 2013 Epicuro Salice Salentino became dry. I had a few grapes before sipping the 2009 Falco Nero Salice Salentino and the flavor became more smooth and I was reminded of blueberry pie. That’s tasty!

Before we wrapped up we took a vote on our favorite Salice Salentino. Two votes for the 2009 Falco Nero and one vote for 2013 Epicuro, while one person said they were both good. Thanks to everyone for joining and by the way, you’re teeth are kind of blue ? I guess this was a pretty dark wine and none of us really noticed. We were all too busy having a good time drinking wine and snacking on all the delicious food!