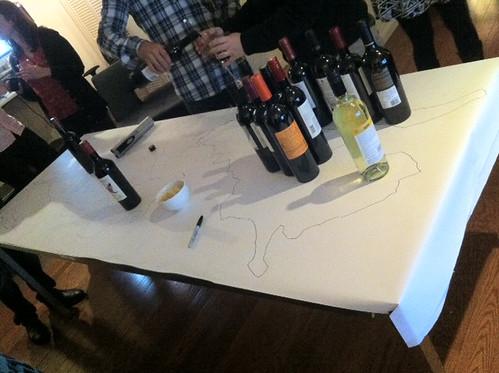 Neil and I attended a friends birthday party with a wine theme. I could barely contain my excitement about tasting wines from all over the world! The theme for the party was wine from the Southern Hemisphere. It was suggested that everyone bring wine from South America, South Africa, Australia, or New Zealand.

I originally planned to bring a Sauvignon Blanc from New Zealand so that I could experience the grassy flavor usually found in these. When I got to the store I found a Shiraz from Australia, with a birthday cake on it. This wine by Layer Cake, was pure Shiraz grapes, and I was curious to see how a Shiraz would taste different from a Syrah. I had heard that Australian Shiraz wines were typically sweeter.

We were able to try many wines that night so we decided to keep the descriptions short and sweet. It was really cool how all the wines were set up by region on a giant map. Lets start with the South African wines and then move around the world!

Our first wine of the evening was a Pinotage with a strong earthy flavor. The rest of the South African wines were blends, such as Wolftrap, made from Syrah, Mourvèdre, and Viognier. This was definitely our favorite of the evening, probably due to its complexity. We could smell Mourvèdre, initially taste Viognier and the finish of a Syrah. Yum! Another blend was made from white grapes; Sauvignon blanc and Semillion, with a noticeble barnyard and oak flavor. The final South African blend was Chocolate Block which really did smell like chocolate and coat our mouth.

Now we will head down under to Australia. The Shiraz that we brought had a strong initial flavor with a light fruit taste and a smooth finish. From the Syrahs I’ve tasted, I’d say it was pretty similar. Next we tried a Shiraz and Viognier blend. This wine was pretty different for each of us. Neil found it to have a sweet start and earthy finish with nothing in between. I liked the flavors and smoothness but could notice what he was talking about. We were tasting these wines with some new friends and the final Australian wine, Pillar Box Reserve had a very pronounced pine needle taste to them but mint for me. Pretty interesting!

Before we leave this part of the world we did try one wine from New Zealand. It was a Sauvignon blanc with sweet tropical fruit aromas but a more acidic taste. I don’t recall the grassy flavor that I had heard about, I guess I’ll have to try it again another time.

The South American wines at the party came from Chile and Argentina. Neil was excited to try the Pinot Noir from Chile and described it as well-rounded with the right amount of throat spice! Then onto the Carmenere, which as far as we know, was our first time trying this type of wine. It came from Chile and was dry with a very obvious spice.

We finished out the evening by trying 2 final wines from Argentina. The first was a Malbec/Tempranillo blend that reminded us of cardboard and alcohol. Not a great combination. The other was a white wine by Dona Paula that was smoky and smelled acidic. Apparently the Argentinian wines weren’t for us.

It was so much fun to get to try all these different worldly wines. And we even found one that we really liked from the South African ones. We’ll need to look for that one in the stores!

For those of you who love reading about cheese and wine, there was some cheese at the party too! I don’t know exactly what types but I think they were a dry Gouda, sheep’s milk, Brie and maybe a cheddar. It was great to have these alongside the wines. I mainly used them to try to calm own some of the bold flavors in the wines. Looking forward to some more wine and cheese this weekend!