Speak and White Stilton with Apricots 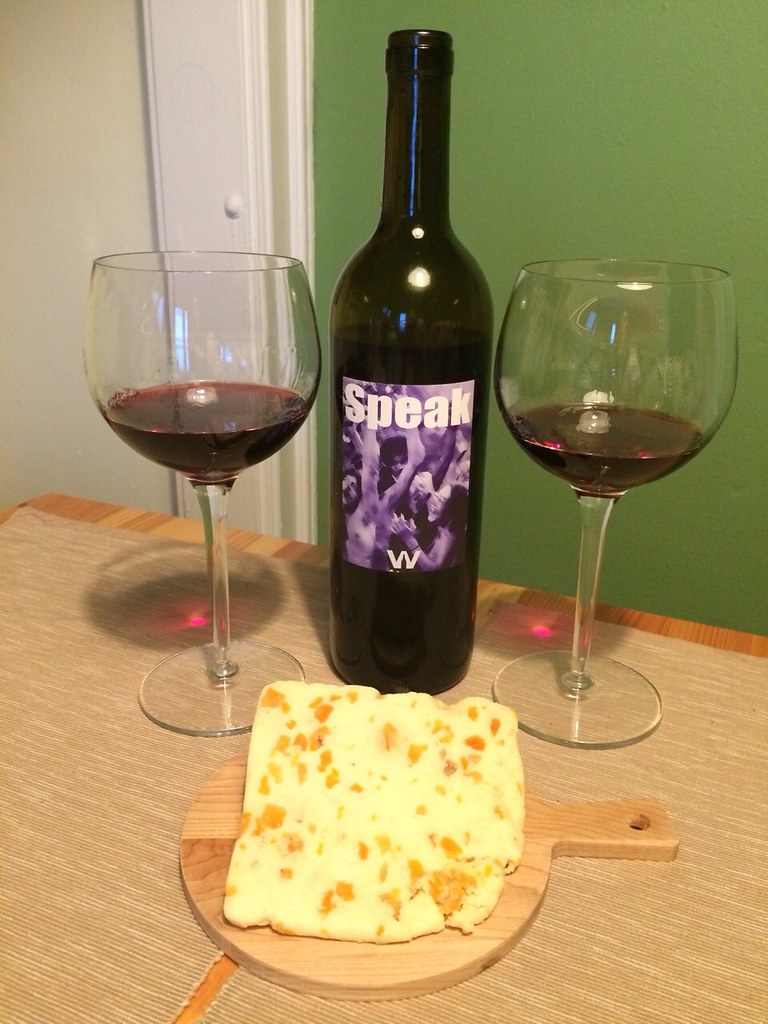 When I started at Winery SF, http://www.winery-sf.com, over two years ago, I was introduced to the Revolution Series of wines. This was a collection of wines with incredibly colorful labels and themes reminiscent of the flower child era in San Francisco. There were all kinds of wines, Peace  Love and Happiness, Flower Child, Values, etc. Included in the collection was “Speak”, a Syrah blend with an incredibly smoky flavor, dubbed “the campfire wine.”  The grapes in 2008 were heavily influenced by the forest fires in Mendocino, CA, a characteristic described as “smoke taint.” (http://www.winespectator.com/webfeature/show/id/Northern-California-Vineyards-Impacted-by-Wildfires_4228)

Neil instantly fell in love with this wine since it reminded him of scotch. He picked up a bottle whenever he had a chance. Then about a year ago, it was announced that the Revolution Series was about to be sold out, so he couldn’t resist the urge to buy a case. After some careful rationing on his part, he is down to the last couple bottles and we figured it was only appropriate to pair it with some cheese for WineAndCheeseFriday. As we write this entry, there are probably only a handful of bottles of Speak out there. This was always an interesting wine for people to taste at work, let’s see what this 2008 wine is doing today?

Before we even started the tasting, Neil was excited to smell the aroma in the room. He could live in this wine! Since it’s one of his favorites, we’ll let him tell you about it. Without hesitation he said “This wine has aromas of currant, plum, pomegranate, smoke and dried fruit.” As I was swirling the wine, I noticed the clear ring around the perimeter of the glass due to the wine having some age on it. Then, I added that this wine smells like grapes, smoke, popcorn and ham. What an interesting wine! And then there’s the flavors, which it seems I was more of the detective today. I picked up smoke, tannins, spice, as well as a softness, with a tart flavor, and a dry, light finish that changed into a juicy lingering finish. Neil identified all the fruits, like he usually does, including currant, blackberry and boysenberry but questioned if the wine was past it’s peak? Whether it was or wasn’t, he was still enjoying it. Sometimes I can’t handle the smokiness of this wine but I don’t recall ever smelling the popcorn before. It’s always fun to get to taste the same wine multiple times to see how it changes.

After all that wine “speak” we need to give the cheese some attention. We chose to pair a Stilton cheese with the wine today because we thought the sweetness of the apricots might help balance the smokiness of the wine. This was our first time trying Stilton with Apricots, although we have tried the lemon and maybe orange Stilton too. We started by figuring out the texture of this cheese. It reminded us of the texture of dough since it was a little soft, crumbly and melted in our mouths. Then we determined that this cheese was light; with a light salt, light sweetness, light finish and general lightness overall. The apricots were nice and gave the cheese a hint of tartness. Overall a fun, pleasant cheese! Have you ever tried a cheese with fruit in it?

As we paired the Speak and White Stilton with Apricots, Neil found the cheese to get sweeter and lighter while the wine increased in smoke and pepper. He found the pairing to be just okay. I smelled smoke in the wine, noticed a tart flavor, spice and alcohol. The cheese became more creamy but I didn’t see much of a change in the wine, although I did  get a little bit of heartburn. It seems Neil did find the wine and cheese to impact each other but didn’t have an overwhelming reaction as in some of our other pairings. Nevertheless, we finally paired the Speak with some cheese and got to see what that bottle of wine was doing on that day.