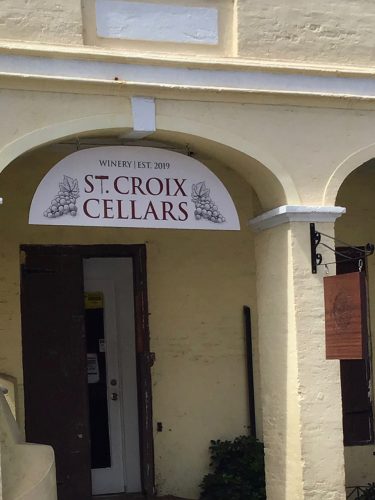 Renee began her wine life in a small Michigan winery. Once she was able to return to St Croix she was ready to open her own wine endeavor. She’d source the juice from California vineyards and then make the wine here on the island. They purchased a place in downtown and the wheels were in motion until the pandemic hit. That didn’t stop them though, there was enough room to make wine, prepare small plates and do tastings, right?

We had heard about St Croix Cellars just after we arrived here. It had only been a year and a half since we went wine tasting. You can imagine that we were pretty excited about visiting! Their FB page said that they offered specials on #WineWednesday so the plan was set. Neil and I would have a wine tasting date night soon.

Only thing we weren’t counting on was other people with that same plan. When we arrived that Wednesday night, they were already full due to pandemic capacity limits. There wasn’t much that would have stopped us from having that wine tasting date though, so we made a reservation to come back Saturday afternoon. 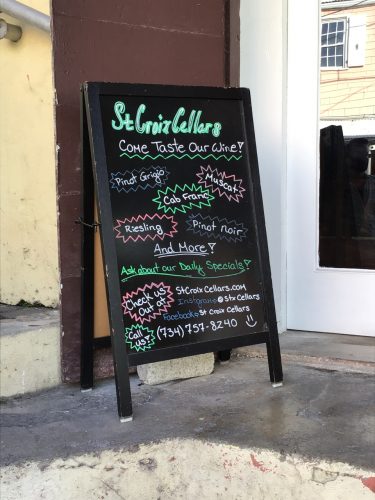 Saturday was here and we were ready. We knew that they offered flights, bottles, and a cheese plate so we had an idea of what we’d be having. Since their facility isn’t very big, they make a handful of wines and then sell them until they’re gone. Then they find out what’s available for juice the next time around. We checked out what they currently offered and set up our flights.

There was a Chef’s Choice cheese plate too so we were curious to see what that would include. Renee brought it over and let us know that we’d be tasting Blue Stilton, Smoked Gouda, Aged Cheddar and Wine Cheddar. There was also a side of jam made from their Tempranillo wine. 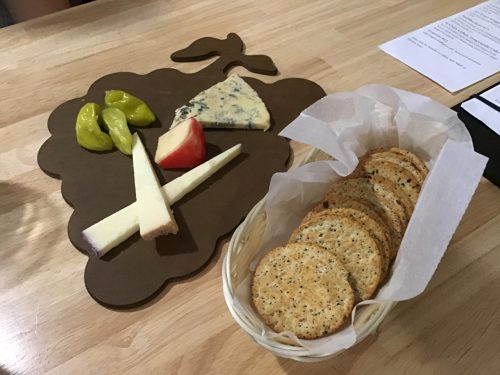 You’ll notice that both Neil and I tried the Cabernet Franc, which isn’t much of a surprise since we both enjoy that grape. Neil was surprised that I chose the Tempranillo too but after we were drinking so much of that Pata Negra wine in Costa Rica, I figured I’d like it. The Pirate’s Pomegranate was a base of Zinfandel wine so I was curious to taste that, although I assumed it would be a sweet one.

Before we started tasting, Renee told us a little more about the winery. They had been in business for almost a year. Typically they are aging their wines around 4 months and using a combination of stainless steel tanks with oak chips. Their first round of wines were well received and a handful of them are out of stock now. These current grapes are from Lodi and Woodbridge, CA.

She did let us know that there were a couple batches that would be ready in about a month so we should check back for what new wines they’ll have. She was also excited to be in discussion with a vineyard in Spain that they’d be working with soon.

The atmosphere was very casual and she was addressing us and another couple at the same time. Then Neil and I started interacting with them and chatting about some of our wine preferences. It felt so “normal” to be out and enjoying ourselves. Hopefully there will be more of this to come! 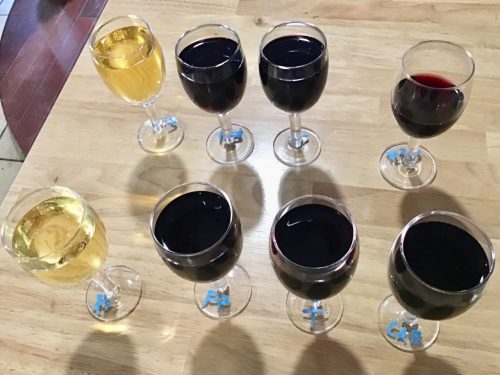 Let’s move on to our tasting notes.

Since we both tasted the Cabernet Franc, we’ll see how they compared? I picked up berry fruit aromas with a hint of cordial. The wine was soft with blackberry and dark fruits. Neil noticed big jammy aromas with a hint of pepper. The flavors were also jammy with slight pepper but then there was some dark cherry too. He also made note of a thicker texture. Well those notes are more similar than other times we compare our aromas and flavors!

Next up is the Tempranillo. I listed aromas of strawberry and vanilla, it smelled great! The flavors were a bit different though, a hint of smoke and prunes. I thought it was really good and my favorite of the tasting. Neil was surprised that this wine had even more jamminess than the Cabernet Franc. There was also an aroma of anise. The flavors were similar for him, jammy with anise as well as a round cassis.

I tasted the Pirate’s Pomegranate next. Although sweet wines aren’t the usual for me, I like to try them during tastings just to see what they’re like. This one smelled pretty and like berry fruits. The texture was on the thicker side and the flavors had a big range of tart, dry and sweet which moved into chocolate. Neil tried a sip and it wasn’t for him but I’m happy I included it in my flight.

Neil’s upcoming wine was the Pinot Noir. I heard Renee mention a couple times that it had a very prominent bing cherry but Neil noticed something a little different. He said it was fruity and saltwater taffy. This puzzled him so he tried it a few different times throughout the night and it kept coming back as saltwater taffy so that’s his note.

Before wrapping up the tasting with my final wine, I made sure to cleanse with some water and a cracker. That pirate’s pomegranate was still hanging on. The Riesling had sweet and floral aromas but they were a little hard to identify in my tasting glass. The tasting notes on the paper suggested nutty flavors and those were definitely there. They caught me a bit by surprise. The flavor was a little tart too probably my least favorite of the tasting.

Neil finished his tasting with a white wine too, a Chardonnay. He picked up straw and honey aromas with honey and pineapple flavors. He also said that this was the first white wine that he noticed flavors of cassis.

Having the cheese was just kind of an added bonus. Neil’s favorite part was the blue stilton. He actually stopped eating it at one point and said you better try this before it’s gone! He also enjoyed the tempranillo jam on the crackers.

Obviously I did some pairing since that’s my thing. As I was tasting the wine soaked cheddar, I picked up flavors that reminded me more of the raspberry aged cheeses we’ve had than the wine soaked ones. I called Renee over to ask and she confirmed that it was soaked with wine. I paired that one with the Cabernet Franc and the wine seemed to get spicier and the cheese was milky and nutty. That was my only pairing with the wine soaked cheese.

We are very familiar with gouda cheeses, although we tend to lean more towards the aged version than the smoked version. I paired ours with the Tempranillo and wow was that good! The cheese was buttery and creamy and the wine flavor had strawberries appear. Such a good pairing! And I already told you that the Tempranillo was my favorite wine. I convinced Neil that he should try the same pairing and he said the wine shifted to a cherry cola flavor. So that’s two votes for that pairing.

I tried the gouda with the Pirates Pomegranate too. This one wasn’t as good of a pairing, the cheese felt thicker and tart and the wine didn’t change.

It was probably around this time that Neil suggested that I start tasting the Stilton. Blue cheese is one of our favorites, so we were really hoping it would be on our cheese plate! I began by pairing the blue with the Cabernet Franc and the cheese enhanced the spiciness of the wine, just like with the wine soaked cheese did. Next I paired the stilton with the Pirates Pomegranate, but the cheese got a little too smoky. Oh well. What if I paired the Stilton with the Riesling? Nope, unfortunately not a great pairing. Not a problem, I think I was just getting really excited about having so many pairings to try.

The couple that we were talking to earlier tried the Muscat so I asked for a sample to try it too. Renee had suggested to let it warm up just a bit to have more flavors develop. The wine smelled nutty with honey and floral flavors. There was that nuttiness again, so I wondered if the flavor might be coming from the oak chips? It could have been but it just seemed more distinct than I’ve tasted before. This one wasn’t really for me either. 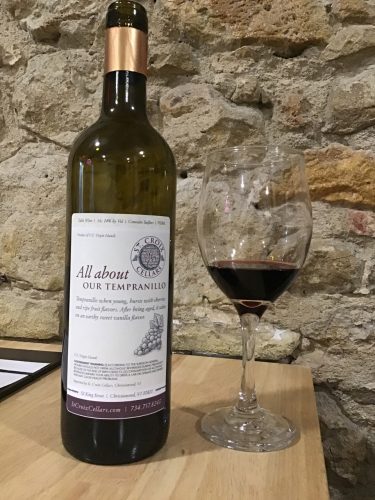 We knew how much we both had been enjoying the Tempranillo so we decided to have a bottle with our dinner. We had seen on the sign by the door that they were serving meatball stromboli that night so it was time for one of those! And after devouring the first one, we shared a second! Yes, they were good. Our compliments to Erol in the kitchen! After all that delicious dinner we figured we should probably start heading out. We even had some tempranillo to bring home.

It really was a great night and the wine was pretty tasty too! Keep up the good work Renee and Derek and I’m thinking we’ll be back. Even if it’s just for a couple glasses of wine and relaxation. So nice to have found a place like this, it really has been forever! 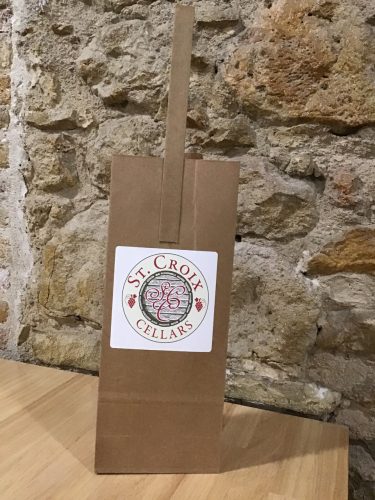 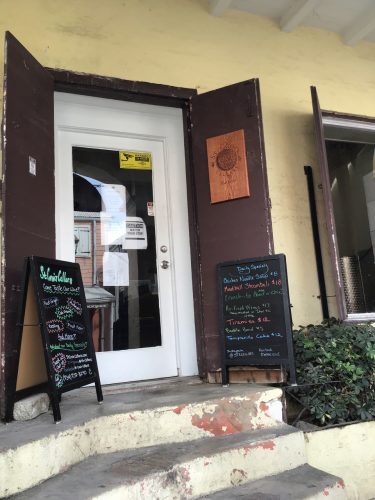