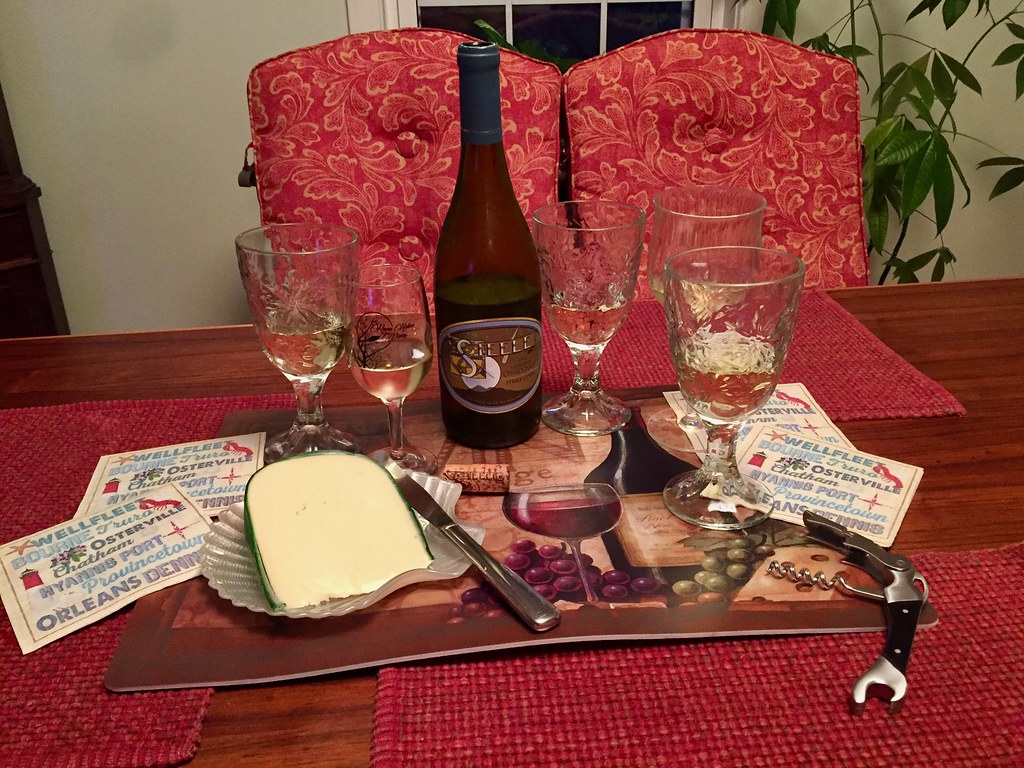 We spent a few days in Cape Cod visiting my mom’s cousin, Karen, and her daughter, Lyndsay. It’s fair to assume that we brought along some wine to enjoy with them. We picked out this bottle of Steele Chardonnay when we were at Wine 101 Hamden a couple weeks back.

Although we’ve been to Lake County quite a few times in California, we’ve never had the chance to try Steele wines. We know Karen is a big fan of Kendall Jackson chardonnay so we figured we’d give it a roll. Her name may sound familiar from a few years back when we tried that infamous chardonnay with her. (https://wineandcheesefriday.com/kendall-jackson-chardonnay-and-notre-dame-french-brie/) 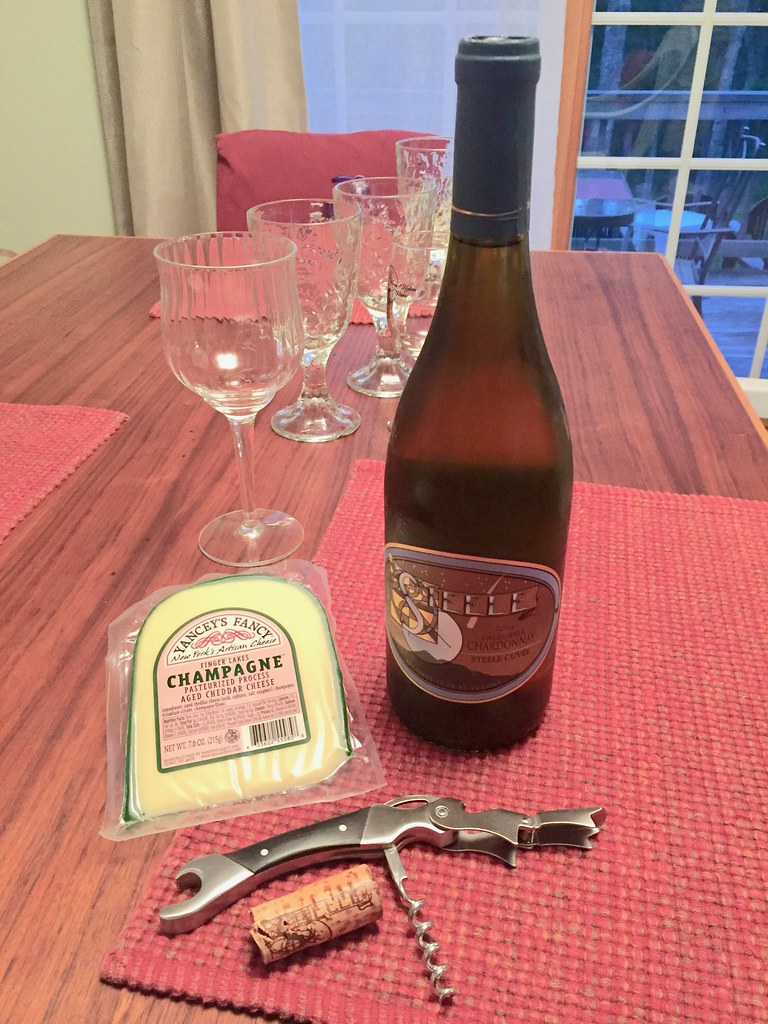 I picked the cheese because I first saw it during our time in Pennsylvania. Then while we were in Cape Cod, I saw it in the local grocery store. That was enough signs for me to taste a cheese that was made with champagne!

Lyndsay was excited to start the wine tasting. We gave her some pointers on how to swirl and swish the wine to get the total experience. She said the first sip of wine was strong but then it became buttery. She found the wine to smell sweet and compared it to some Moscatos she’s tried before. My mom, Betty, disagreed with the wine having sweet aromas, instead she compared the scent to vinegar potato chips. Luckily, she did find it to taste better than it smelled. She even said that although she doesn’t drink much wine, she’d drink it again. Karen tried the wine and said it was nothing like Kendall Jackson chardonnay and that this one tasted fermented and like alcohol. There was no fruit in the flavor and it definitely wasn’t dry. Ok, so she didn’t like this wine by itself, however, I did. I could smell oak then butter and the wine tasted smooth. There were flavors of caramel and creme brûlée with a light oak finish. I called it a “good chard!” Neil picked up butter, vanilla and petrol aromas. The wine tasted buttery and a little sweet with apricot flavors. He said it was too buttery for him and decided he didn’t like it. I guess that’s two and a half votes yes and two and a half votes no, a tie!

Now on to the cheese! When Karen tasted the champagne cheese, she said it melted in her mouth. Lyndsay said it smelled sweet and had a white chocolate texture. She found it to be very creamy and she could spread it onto a cracker. My mom couldn’t pinpoint the smell at first but then she and Lyndsay agreed that it was similar to parmesan cheese. I thought it smelled sweet and then was instantly confused when it tasted like strawberries. Lyndsay figured out that if you ate it slowly, the fruitiness would appear and once it did she called it super frickin’ fruity! I also noticed a cheddar funk in the finish of the cheese. Neil said the texture was really creamy with salty cheddar flavors. He picked up a hint of processed cheese and decided this cheese wasn’t for him. That was ok with Lyndsay and I because we happily ate much more. We even split the remaining cheese to both enjoy the next day. Her daughter Aliyaah tried the cheese a few days later and she liked it too. Lyndsay wasn’t surprised because Aliyaah loves cheese!

With all these mixed reviews of wine and cheese tasting notes, let’s see how everyone liked the pairing of Steele Chardonnay and Champagne Cheese. Karen thought the cheese made the wine better since it cut the flavor of the alcohol in the wine. I noticed more oak in the wine, a sharp flavor but also some butter. Nobody else liked the combination. My mom felt like the wine got more bitter when paired with the cheese. Neil picked up more alcohol. Lyndsay just said it wasn’t good. Guess it wasn’t a great pairing. I wonder if this champagne cheese would have gone better with a sparkling wine? Maybe we’ll try that next time we come across it.

I’m glad we got a chance to celebrate Wine and Cheese Friday with my mom, Karen and Lyndsay. I may have created an understudy for the blog because Lyndsay was already planning another Wine and Cheese tasting with Karen in the next couple days! We’ll have to plan another trip out to Cape Cod to find out what pairings they’ve tried. 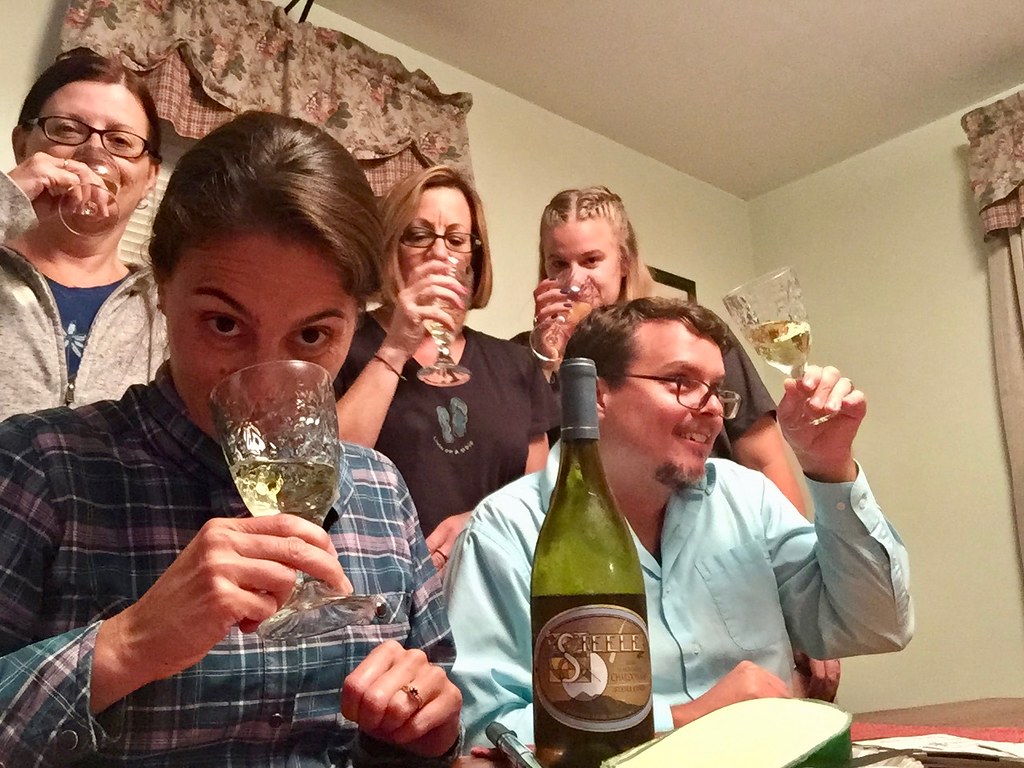