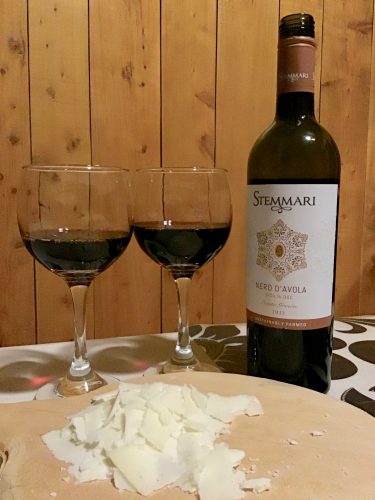 It’s not often that I even consider repeating a wine and cheese pairing but there’s a first time for everything! During our 2019 trip to Costa Rica, we found a wine that we had been keeping our eye out for quite some time, https://wineandcheesefriday.com/stemmari-nero-davola-and-monterrey-cheese/. The Stemmari brand, from Siciliy, had been featured on #wininghourchat multiple times but I had never found their brand until that trip. Then this year I was back in the same liquor store and saw bottles of Stemmari Nero d’Avola on the shelf. Why not choose a new cheese to pair with this wine that we really enjoyed? It was settled, we’d be repeating a wine on #WineAndCheeseFriday!

Not only did we do the pairing last year in our yard on a peaceful afternoon, we also reposted the wine in our Savor the Flavor entry for 2019 after watching the flavors and aromas evolve. I would see that photo of wine quite often when looking back on my previous entries and get constant reminders. Seems like a great wine to repeat and the biggest part, is that I found it again!

In an effort to really repeat the pairing, I cut the second cheese the same way as the first and found a cheese with a similar texture. We did change it up by finding a cheese made from a different milk this time around though. We’d also be using another Costa Rican brand cheese for the sake of keeping it similar. The first pairing was so good that we wanted to see if this is some kind of super wine that works with many cheeses? Let’s see how we did. 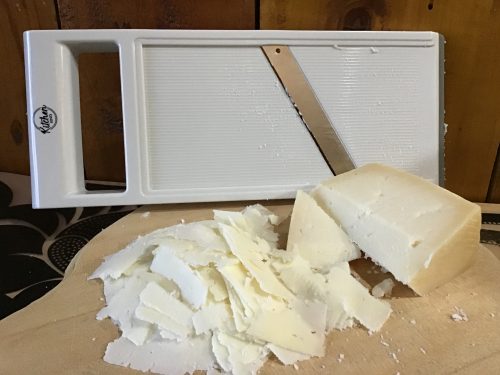 Once I opened up this bottle of Nero d’Avola, I found out it was a year older than the first bottle. Hmm, so I guess it’s not just the same case with a few bottles left over! I had figured that maybe we were the only people buying this Italian wine here in Costa Rica?

I picked up hints of chocolate when pouring the wine so we were starting off good! We swirled the wine to look for our initial aromas and then it smelled a little burnt to me. I was nervous that the bottle may have been too old but Neil disagreed, he identified aromas of cherry cola. We continued on by tasting the wine. The texture was soft but then there was a tannic spice. I thought the flavors were both dark and red fruits. Neil noticed a big black cherry flavor, as well as dark fruit, a hint of earth, spice and a jamminess. I was curious to try it again the next day to see if that burnt meat smell dissipated. 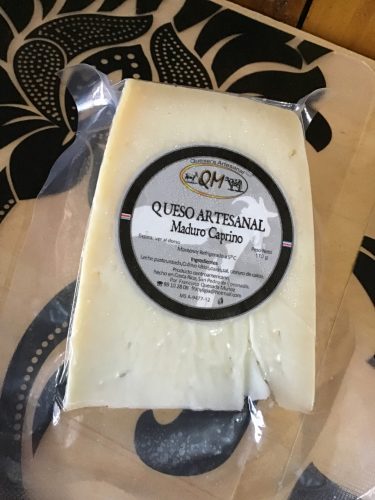 The cheese brand is Quesos QM, which we tried before too but we had never had this specific one. Today’s cheese is made from goat’s milk, which Neil picked up right away as he smelled the cheese. He said it had a barnyard funk and some salty aromas. In addition to the salt, I could also smell the milk. We both described the texture as chalky. This cheese had lots of flavor that lingered, and it was tart and dry. Neil found more of that goat milk funk in the flavor alongside the saltiness. It was just plain good! The only thing I’d say when comparing it to last years pairing is that this cheese may have sliced up a bit thinner.

Now its time for the pairing of Nero d’Avola and Maduro Caprino cheese. Neil loved that the cheese was really milky and had the flavor of goats milk. Originally he had noticed some alcohol in the wine but that lessened during the pairing, as well as more cherry flavor appearing. He called it “A really good pairing. Probably the best in a while!” He said even the chalkiness in the cheese went away leaving something that was rich and creamy. I could still smell the burnt meat in the wine but the cheese did calm down the spice until it returned in the finish. The cheese smelled and tasted richer, it wasn’t tart anymore.

Sounds to me like this pairing was just as good for Neil as the first time around! After reading through the previous entry, it seems I enjoyed the wine more last year.

I will say that since we know this wine changes from day to day, I tasted it again the next day. I was happy to find black licorice aromas and thankfully the meat smell was gone! The wine was dry with dark fruit, some prune and spice. Neil tried it too and said the texture was much more velvety. It was definitely different on the second night! It seemed closer to last years notes too. Maybe it just needed more time to open up since it was from 2015?

Either way it was a tasty wine and worth picking up again this year. So glad we did! As for the cheese, we still had half of the block to enjoy another day and we sure did enjoy it! I think we’ll keep the brand Quesos QM in our back pocket as something to keep our eye out for while we’re in Costa Rica. 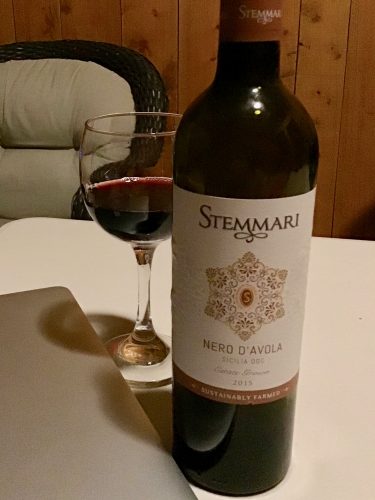