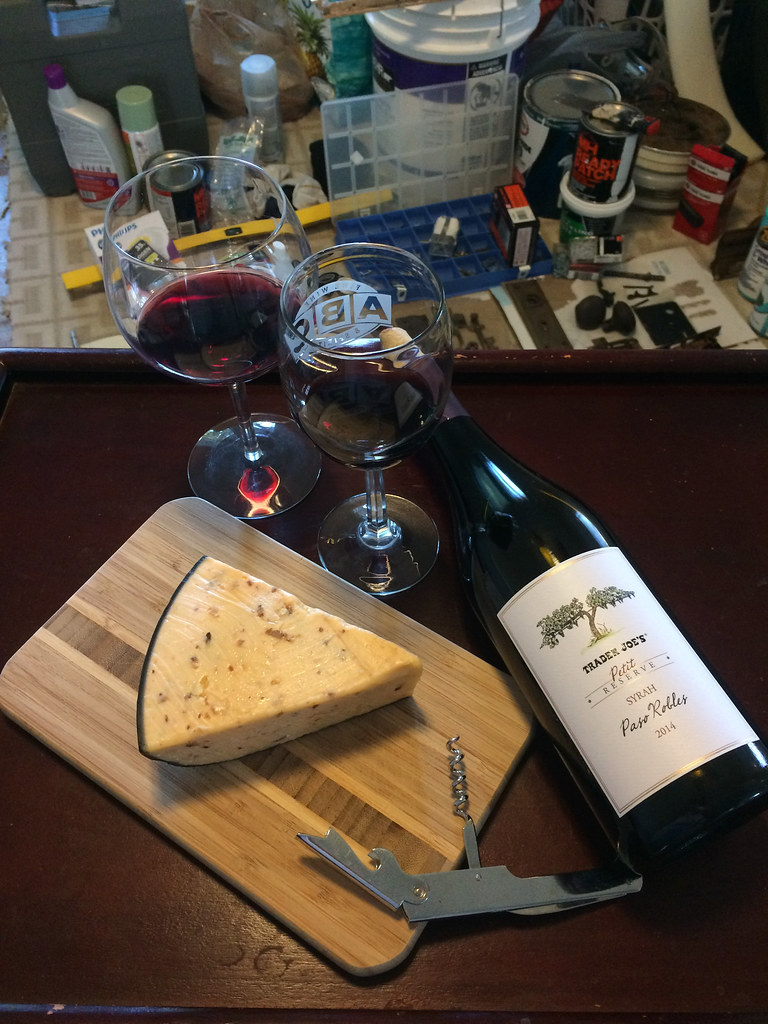 Living in a construction zone can be a challenge. Add some bacon to make it better!

This week’s entry was themed with bacon in mind. Neil really likes Syrah and I know that some wines that use this grape taste like bacon. We chose this bacon cheddar cheese thinking the entire pairing could be bacon-tastic. Let’s see if this is a bacon Syrah or at least if it’s a Syrah that Neil can enjoy for a few minutes before we head back to the construction zone. It’s hard work being a landlord!

When I swirled this wine, I identified dark fruits similar to blackberry and black pepper spice. Neil agreed and added a hint of smoke to the list of aromas. Then I tasted it and found the same flavors as aromas. I sat there for a few more minutes continuing to analyze the wine in case I had missed something. It seemed too easy! The flavor seemed lighter than the aromas lead us to believe. The wine was also lighter in texture than I would expect for a Syrah. Neil picked up dark berry fruit, smoke, a hint of anise and some spice for the flavors. It had a good flavor and was pretty easy to drink.* Sadly though, there was no bacon flavor.

There must be a bacon flavor in this bacon cheddar, let’s give it a try! When I opened the package it definitely smelled like cheddar! Once we started to look for specific aromas, it was salty from the cheese and the bacon. It was a little softer than we figured it would be. The texture seemed familiar and reminded Neil of Stilton or Wensleydale. We wondered if it might be made in the same style? The flavor tasted like a loaded baked potato with a hint of sharpness. Neil described the flavors as salt, fresh cooked bacon, and a good funk. It was really good! We both wanted to just sit there and continue to eat the cheese. Maybe that was just us avoiding getting back to work? You should probably have a taste for yourself, to see what you think.

As we paired the Syrah and Bacon Cheddar, Neil found the wine to become super smooth and very fruity. The wine smelled softer to me with more fruit but then the black pepper came back with a vengeance. We found this to be a cool pairing because both of us had a flavor from the wine transfer to the cheese. I noticed the cheese feeling spicy on my tongue and having more milk flavor. Neil said the cheese became smoky and was less sharp. The aroma of the cheese changed for me too and now it smelled like a loaded baked potato instead of the salt like before.

So although the pairing wasn’t entirely bacon-tastic, it was one with a noticeable change due to the combination of flavors. We look forward to those pairing experiences! Do you have a bacon Syrah you could recommend to us? With all those bacon-lovers out there, I’m sure one of you wrote down that wine you tried!

*We tried the wine a few days later and it had a mild and dry flavor but was still pretty aromatic. We should probably go pick up another bottle.