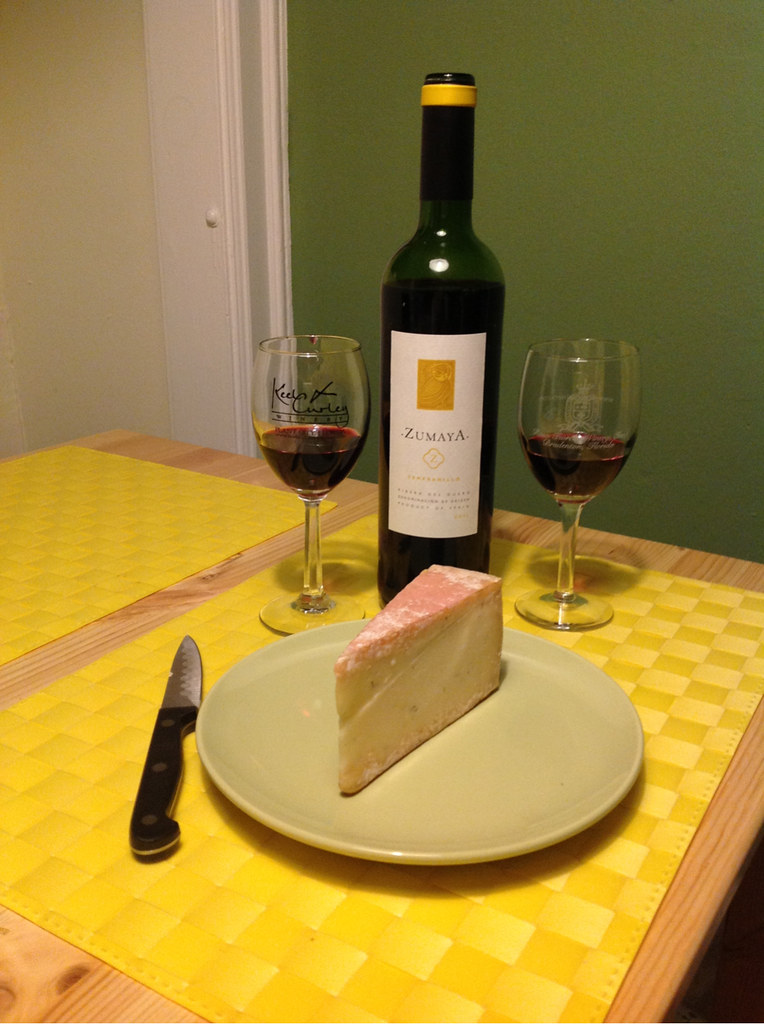 This weeks pairing was suggested at Trader Joes. (http://traderjoes.com/) The wine, Tempranillo, was from the Ribera del duero region of Spain. We tried another wine from this region when we visited The Wine Club. (http://mferraro73.tumblr.com/post/55191187751/trip-to-the-wine-club-7-5-we-decided-to-go-to) According to www.cheese.com, “Usually, Tommes are cheeses produced from skimmed milk after the cream has been removed to make butter and full cream cheeses. Consequently, they are low in fat.” We had never heard of this type of cheese.

When Neil tried to identify aromas in the Tempranillo, he picked out rich floral notes, anise and spices. He tasted blackberry, raspberry, and found it to be sweeter than expected, more like semi dry. I noticed spice, blackberry and vanilla. As I continued to sip the wine it kept changing. At first there was a smooth finish, then a somewhat tannic finish. The more that I drank the wine the tannins increased. I believe the tannins were from oak and not the grape because the wine seems too light. I liked it better at the beginning with the fruity flavors.

Elderflower Tomme was the Cheese of month (September) at Trader Joes. When I opened the package the cheese smelled a little funky. We both agreed that it had a medium soft texture. I thought it was waxy, creamy and kind of mild with no bold flavors. Neil said it reminded him of Monterrey jack cheese. Since the cheese was creamy I would guess it was made from cows milk.

When we tasted the Tempranillo and Elderflower Tomme Neil noticed the cheese brought out a smokiness in the wine, and considered it a good pairing. I found that the wine singled out the funkiness of cheese, then the wine got sweet and tangy. I would rate this pairing and the wine and cheese individually as average.