The Gruyère Experience in Switzerland, Part 2 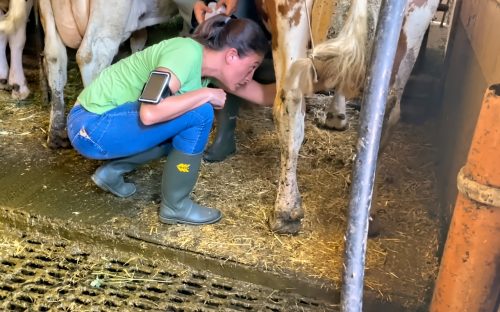 Our story left off when you had just heard that Maria was going to milk a cow that afternoon, won’t you join us as The Gruyère Experience in Switzerland continues!

Maria milks a cow
Pieter started at the end of the barn where the bull is tied up. He is still the one that milks the first female cow because the bull doesn’t really like having other people near him. That’s understandable! He showed me how to rub the udders with the straw in order to stimulate the milk flow. Next you disinfect the udder with a cleansing wipe. The milking isn’t done by hand but instead by using a vacuum pump that hooks onto the udders.

Since it’s more of a mechanical version, there’s no bucket that the milk flows into either. The milk travels through tubes into the pipes that run along the ceiling and lead into the milk room at the front of the barn. There it is run through another series of pipes and then eventually pumped into the tank that Benno connects to the tractor and brings over to the creamery.

Very cool to see all of this, more food production in action! I watched Lynn as she worked with a few more cows to see the whole process. The cows are connected to the hoses for about 5 minutes of milking and then Lynn would massage the udder a little more to make sure the milk was out. At the end, a bottle with a hole on the top, is used to dip each udder into in order to disinfect it. The cows are given a treat of salt and minerals to eat and then they’ll head outside once all the cows are done. 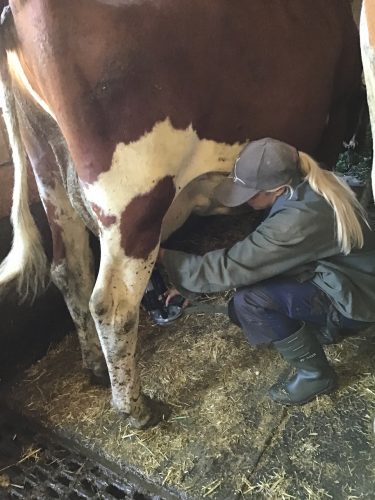 Soon it would be my turn but they were waiting until it was time for the more “easy going” cows. Some cows aren’t a fan of a stranger milking them, so I was happy to wait. My two cows were on the end of the barn opposite of where the bull was. 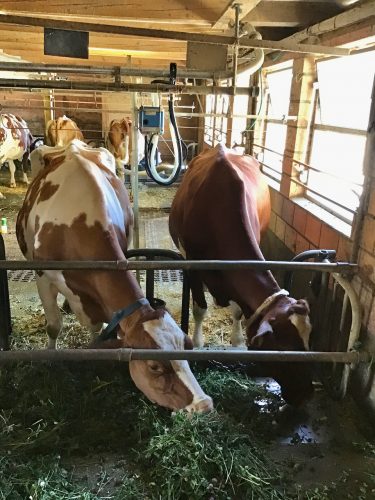 I began by stimulating the udder with the straw and then using the cleansing wipe. Lynn handed me the milking pump which I had to connect up above to the pipes. It has to go in a specific way or the milk won’t flow properly. Next I connected each pump to each udder. I can see how this takes some practice, it’s kind of a handful to balance and you have to connect it just right because if there isn’t a proper seal, it will fall off. Once everything was attached, I stood back and waited until it was time to remove them. 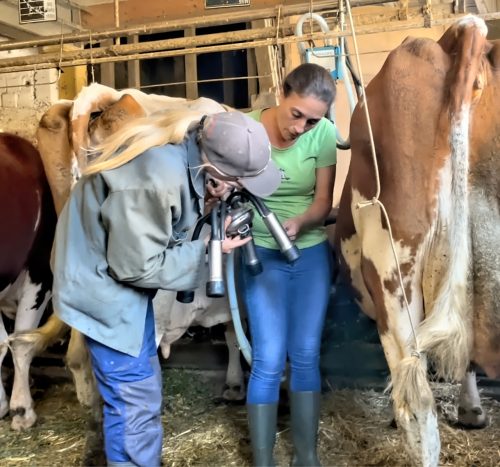 In the pictures, you might notice that the cows tails are tied up towards the ceiling. Any guess why? Well its so that when they poop, the tails don’t get dirty. And poop they did, and pee. So basically, at any point during the process, you might get a surprise. During the time waiting for my turn to milk the cow, I watched all of this around me and that is what I was most concerned about. So I just told myself, if it happened while I was crouched down there, it’s all part of the experience. Luckily it did not!!

And as you’d imagine, with all this cow poop around, flies are inevitable. They fight off the flies by using a giant fly strip along the entire pipe running from end to end of the barn. It does help some but that’s also why the cows are stomping a bit and wagging their tails, to fight off the flies. Thankfully, my job wasn’t to clean any of that up, but I did see both Lynn and Pieter, pushing it all around the barn about every five minutes. The entire milking process probably took a little over an hour, so I stuck around in order to get the full experience.

Once the cows were all done, they made their way out into the field so I watched as they paraded out. Next up it was time to clean the milking equipment over in the milk room, which I was much happier to help with than the barn cleaning. 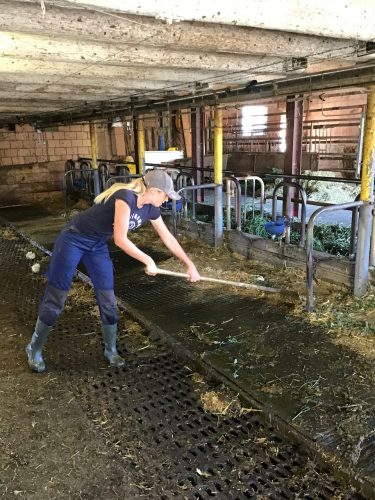 The milking room had more automation for the cleaning. There were levers to move that changed the direction of the water so we basically shot it through all the pipes until it came out clean. We hand cleaned the three milking pumps in the sink and then hung them to dry. During our cleaning time, Pieter drove the milk tanker over to the coop so it could be turned into cheese! 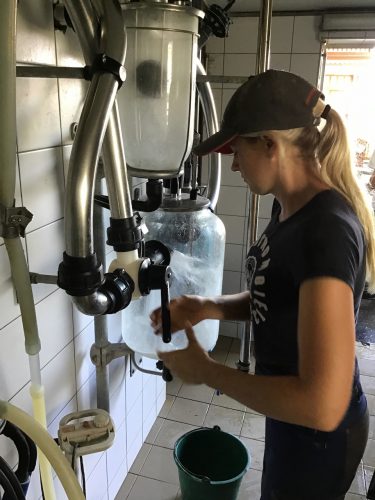 What an experience not only getting to see the cows being milked but also to lend a hand and milk two cows myself. That’s not something I’ll forget anytime soon! So happy it was able to be part of my Swiss Farm experience!

Going to another dairy farm

There were still a few things that happened at the farm before we left so we tagged along on the day when Benno brought the bull back to a local farmer. Just like sharing farm equipment amongst neighbors, they also share bulls too. Benno brought the bull out of the barn and into the trailer that we could connect to the car. That day, we’d head over to another dairy farm that was about 20 minutes away. 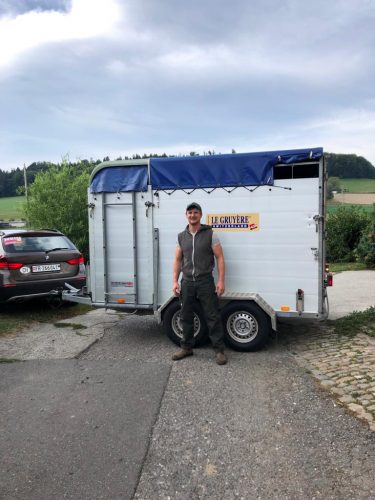 Once we arrived and the bull was safely back in his home barn, the farmer invited all of us to come tour his farm. Neil and I happily agreed and we made our way around the property. His farm had been on that specific property for a very long time (500 years) but he had recently done quite a few renovations that he was excited to show off. 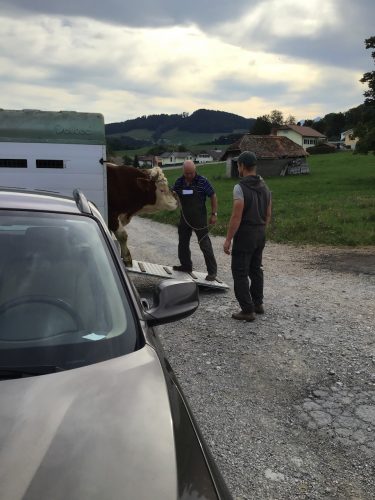 We walked through the enormous new barn where the cows took shelter, but then saw the room where they specifically go to be milked, which was wrought iron and very modern. We even saw another barn where the cranes were used to bring down the bales of hay. This definitely seemed like a larger operation than Benno’s farm. There was even a facility where he used to make the cheese himself. This part is no longer operational though, now the coop he belongs to just sends someone twice a day to pick up his milk. 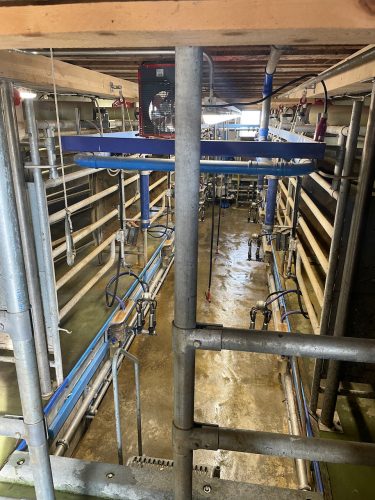 He invited us to see his home too where we all sat down to some coffee, cookies and cheese. His cheese was aged but it still seemed moist and the flavor and aroma were like a cave. Oh boy, we ate so much during that visit. We all thanked our gracious host as we walked out the door.

And in order to wrap up the day, we made our way over to the mountains where Benno’s adolescent cows lived. There is another farmer caring for them while they’re over there but once again, everyone in the Gruyère coop works together!

We drove up a windy hill with the empty trailer attached to the car and my vertigo definitely kicked in but I held strong until we arrived. We knew we’d be going to see the cows but apparently there is a fondue restaurant there too. What a pleasant surprise! It’s fine with us to get to have this decadent meal for a second time in Switzerland! 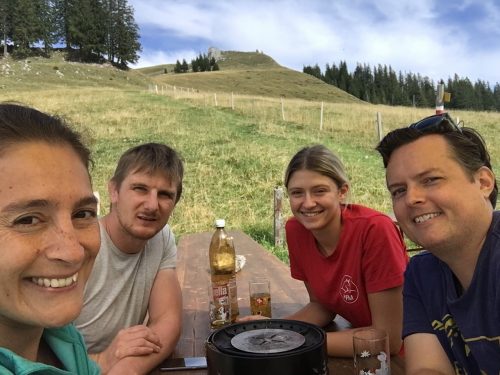 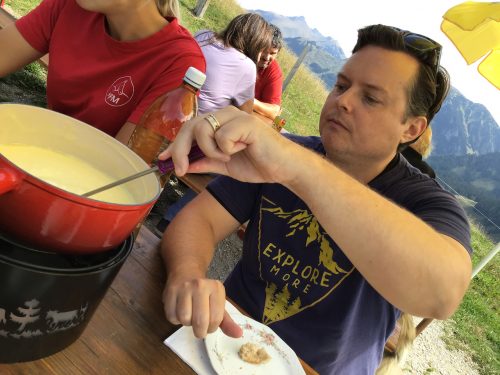 The farmer came over to the restaurant once he knew that Benno had arrived to check in and give him a status update on the cows. We didn’t end up heading over to the them, but instead we went for a little hike up the mountain to work off some of those calories. It was an incredibly steep hike but the views of the black lake and the pack of horses that we came by made it well worth it. What a full day of events, but that’s how it seemed to go during our time there. 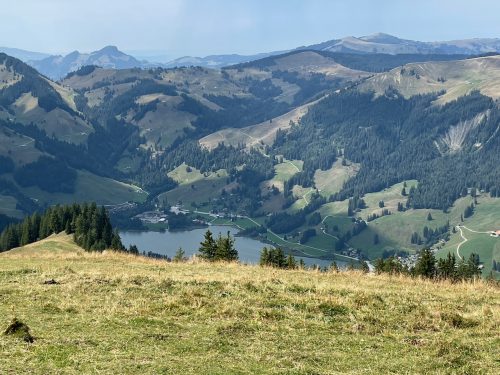 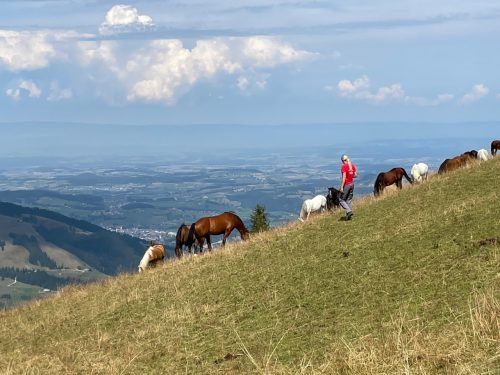 Closing
We hope you enjoyed reading all about our time at the Swiss dairy farm with our friends Benno and Nora. We really never could have imagined that we’d have such an all inclusive experience during our 10 day stay. Not only did we enjoy the education, we both really enjoyed the real-life activities that we were able to do while being slightly unplugged and following a different routine. Thanks so much to both of them! Well now it’s time to go on a bit of a cheese fast (at least for a few days)… 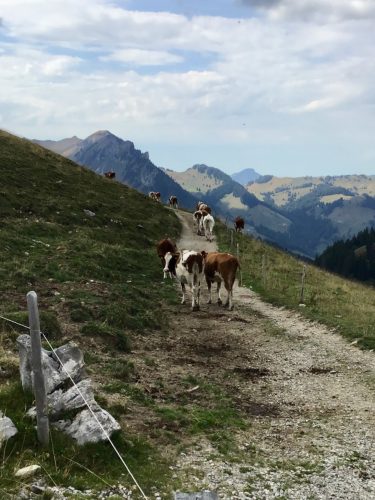 2 Replies to “The Gruyère Experience in Switzerland, Part 2”