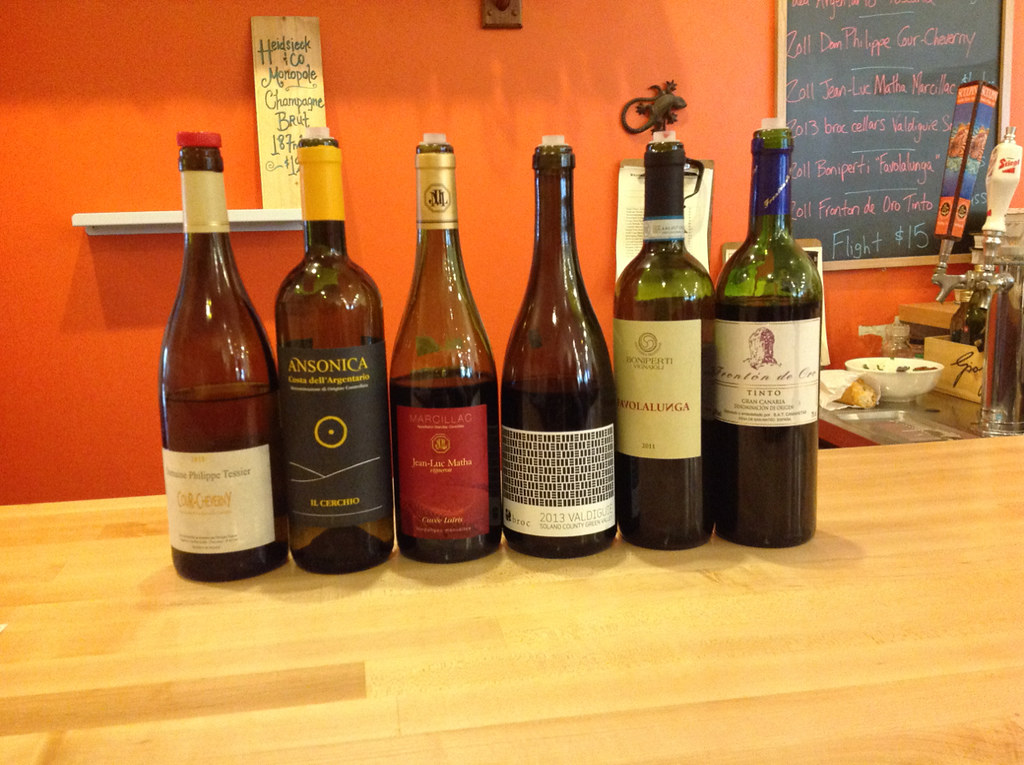 This week I attended a wine tasting called “The Strange” at William Cross Wine Merchants. (http://wmcross.com) I have passed this wine shop many times while riding the bus to work and decided it was time to check out one of their Wednesday night tasting flights. The space was divided into a wine retail store in the front and a tasting bar in the back. There was quite a sense of community there, with many people who were greeted by name. The room was comfortable with maps on the wall and some people even brought their dinner in. I was pretty curious to see what this “Strange” wine tasting would entail.

Upon first glance at the tasting menu for the evening, I was unfamiliar with everything on there except for Valdiguie, which I had heard of once but never tasted. It definitely appeared Strange, I really had no idea how to even figure out what we’d be tasting. This would take some research when I got home. Steven, the host and owner of the store began by pouring me the first wine, a white.

Steven let me know that the 2011 Philippe Tessier Cour-Cheverny wine was from the Loire Valley in France and the grape is Romorantin. The wine had crisp mineral aromas with a tart flavor and full body. I was definitely intrigued by this! I’ve never had a wine that was both full bodied and mineral. I purchased a bottle so I can dive into this wine and try to figure it out. After some research, I found out that Cour-Cheverny is the appellation where Romorantin is grown.

The 2011 Il Cerchio Ansonica Costa dell’ Argentario Toscana was the next wine to try. Something that makes this wine strange is the grape used; when it’s grown in Tuscany, it is called Ansonica but when grown in Sicily, you will hear it called Inzolia. This white wine was a darker yellow color with light aromas of stone fruit, flavors of honey, minerals and a tartness. Once again a thicker wine with mineral flavors, I was definitely puzzled.

2012 Jean-Luc Matha Cuvee Lairis Marcillac is another wine with a curve ball for us. Jean-Luc Matha is the producer, Marcillac is the part of France that the wine is from, and the grape, Fer Servadou, is nowhere to be found in the name of the wine. When it came to tasting notes for this wine, it definitely had a bold aroma and flavor! The color was very dark, smelled like tar or traffic and despite the light body, and dryness there were flavors of slate and citrus. This is definitely the first time I’ve identified citrus in a red wine!

I’m not quite sure why the 2013 Broc Cellars Valdiguie Solano County Green Valley was included in this tasting, perhaps because of the name of the grape, Valdiguie. This wine was a nice treat amongst all these other confusing wines because it had fruit aromas, fruit flavors, and a creamy finish, all things that are familiar to me. Perhaps this is because it was the only California wine in the tasting. If you’ve heard of Valdiguie before, maybe you know it was called Napa Gamay until 1980 when the DNA was correctly identified.

2011 Boniperti Favolalunga Colline Novaresi was the next wine I tried. It had fruity aromas, with an earthy, dry, tar flavor and lighter body. The grape used in this wine, Vespolina, is low yielding on the vine and is very rarely used as a varietal wine. I suppose I should feel privileged to be tasting this wine. Let’s dissect the name of this wine for a minute;
the producer of this wine is Boniperti, and the wine is made in Colline Novaresi, a part of Piedmont, Italy. Why is it called Favolalunga? I couldn’t find that answer, so I guess it’s just the name of the wine. As I researched this wine, I found out the grapes are grown in a part of Italy which is near the cheese cave we visited back in March. (http://mferraro73.tumblr.com/post/82455563549/wine-and-cheese-friday-a-trip-to-a-cheese-cave)

The final wine in the tasting, 2011 Fronton de Oro Tinto Gran Canaria, had tart and earthy aromas, slate and cherry flavors with a vanilla finish. There was a hint of alcohol flavor as well but I didn’t notice the percentage in this wine. The Canary Islands have been growing grapes since the 15th Century but was only recognized as a Denomination of Origin in 2000. This wine is made from Tintilia and Listan Negro, common grapes for this area.

I’m not sure how they came up with the criteria of what would be included in The Strange tasting, but I can say between the names, confusing profiles and the grapes identity crisis, it was appropriate. I enjoyed trying these off-the-wall wines and learned quite a bit after my research into these wines. I look forward to another tasting at William Cross Wine Merchants, maybe next time I’d look for a theme that would be easier to figure out? Probably not, I’m always up for a challenge.