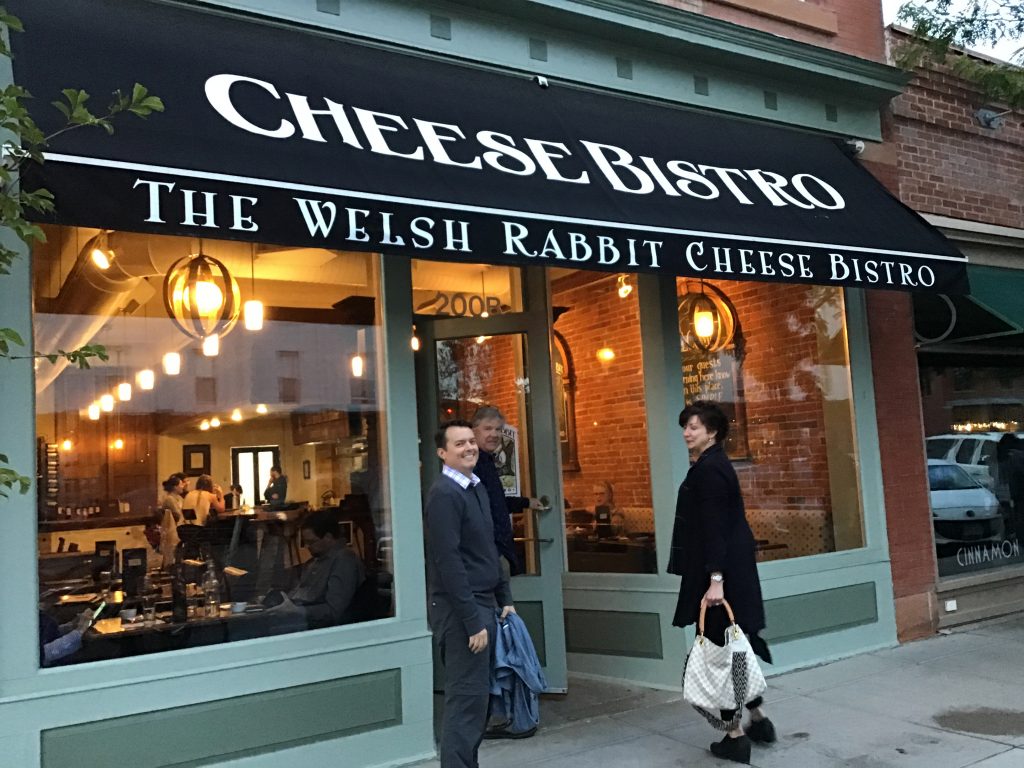 We spent a couple days in Fort Collins, CO with new friends, all because of a cheese class. I met Suzanne at the Cheese bootcamp, held at The Art of Cheese and after being partners in class, she invited Neil and I out to see her town. I found a tourism magazine for Fort Collins and saw an ad for The Welsh Rabbit. When she suggested we go there, I knew we were starting a long lasting friendship! 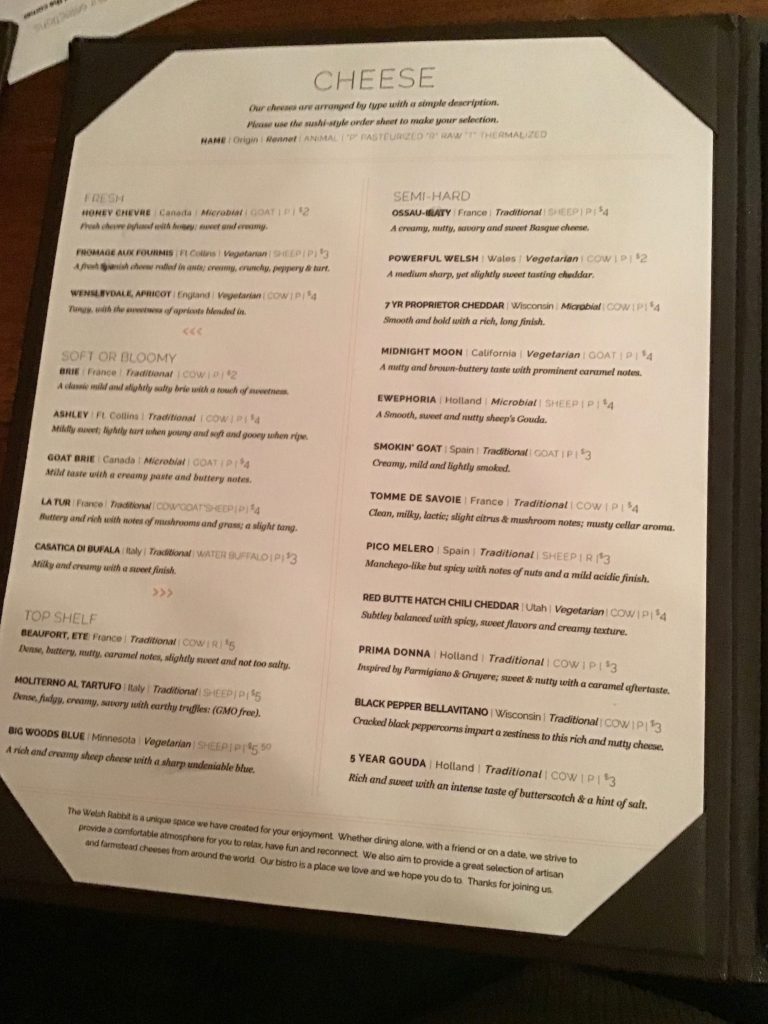 The menu was filled with wines, cheeses, meats and a few small bites. For as many #WineAndCheeseFriday entries as we’ve created, I don’t know if I’ve ever been at a restaurant with that many cheese board options. I’m pretty sure I smiled for the entire evening! So where to begin? The cheese was broken down by categories: fresh, soft or bloomy, top shelf, semi-hard, washed-rind and blue. All of us are pretty into cheese so we didn’t really hesitate much, we just started yelling out which ones we wanted to add to the board. It turns out we ended up with all milk types, and at least one from each category. 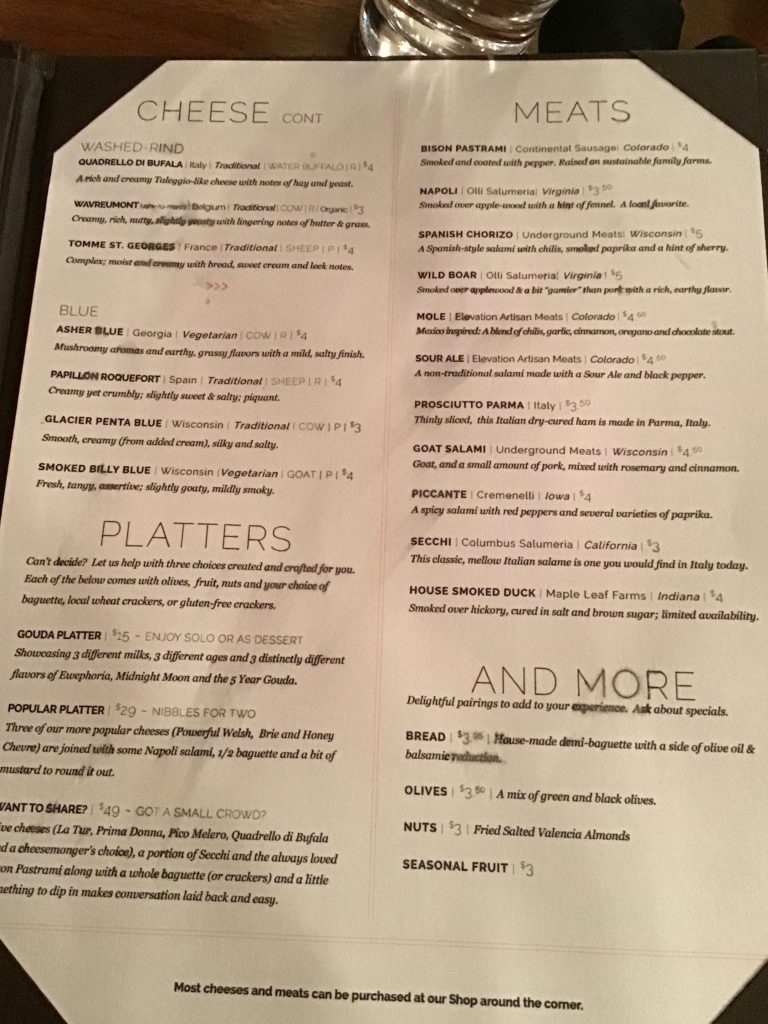 As we waited for our cheeseboard to be prepared, we all sipped on some wine. Mark and Neil both enjoyed sparkling wine and Suzanne ordered some Sauvignon Blanc. I found a red blend of Cabernet Franc, Grolleau and Gamay that looked quite tasty. After ordering the red wine, I thought, I should probably have a white wine to pair with the cheeses too. There was a blend of Grenache Blanc, Marsanne, Clairette and Viognier that I wanted to try. The white blend had both fruit and butter aromas with crisp and tart flavors. As I tasted the red blend, I loved the berry and I could definitely recognize the gamay grapes with a hint of graphite in there too.

Just as I finished recording my wine tasting notes, the cheeseboard and meats arrived. The cheeseboard looked so amazing and I got a little flustered trying to remember which was which. Luckily we had checked all the cheeses off on a list when we ordered and they handed it back to us as a road map for our cheese enjoyment. We had chosen a few meats to go with all our cheeses too but we’ll tell you about them in a few minutes. 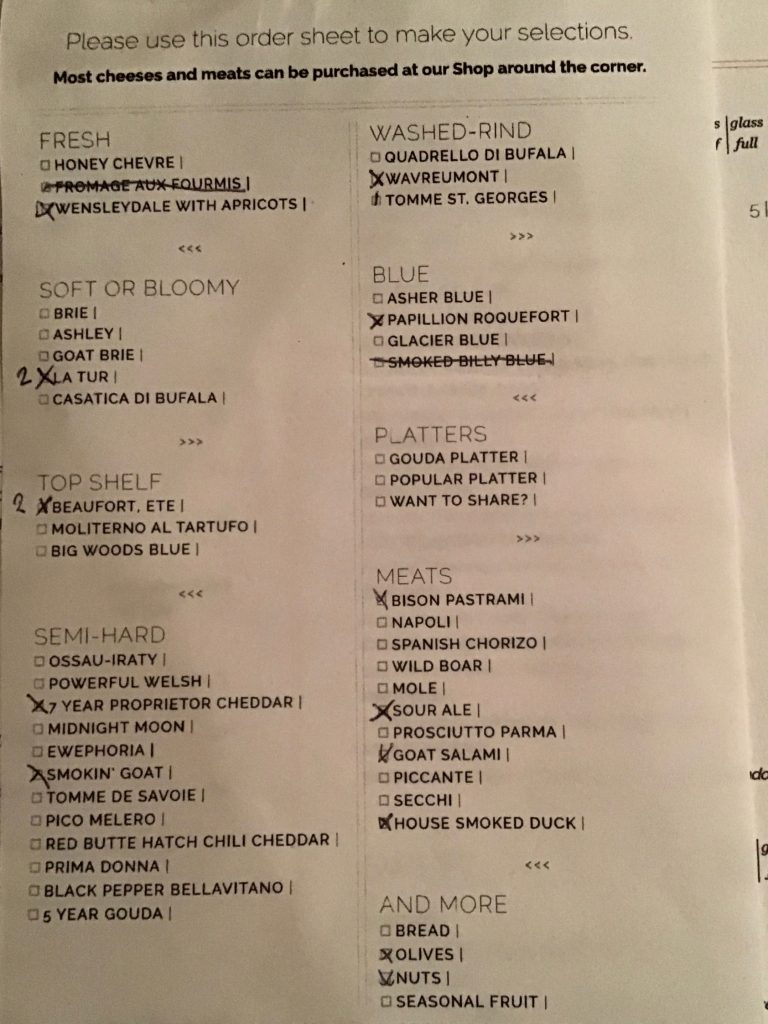 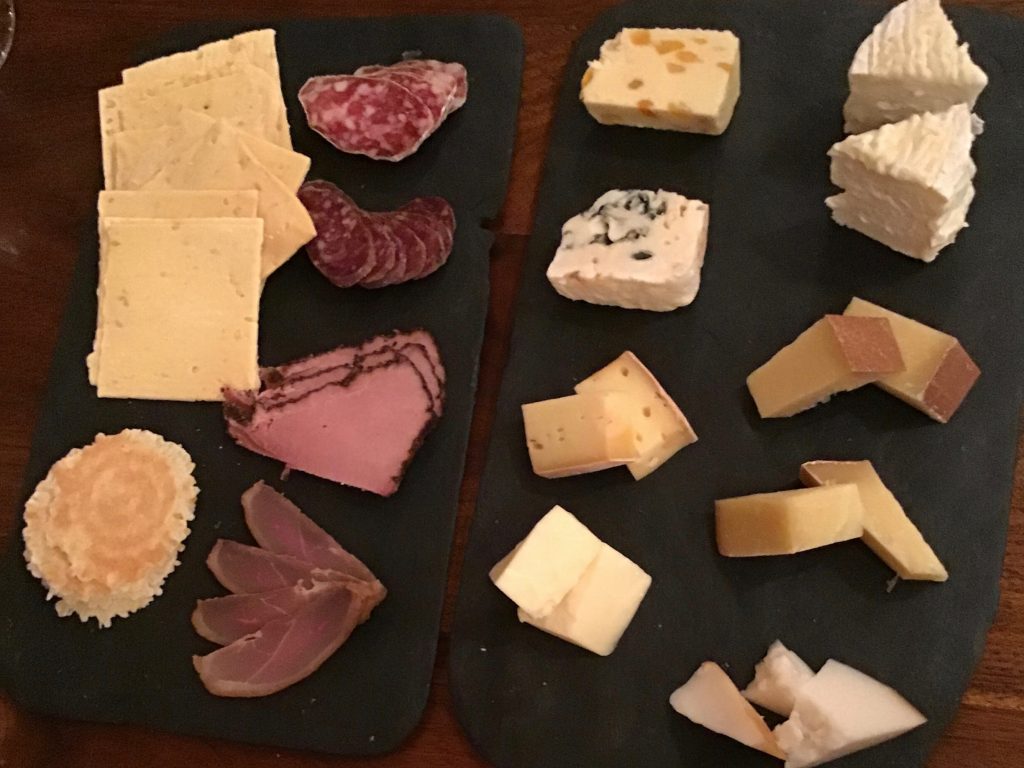 We began our cheese festivities with the La Tur cheese. Neil and I first had this with Chris Fiore, and knew we should include it in the tasting. It didn’t disappoint, with its funky and buttery aromas and milky flavors. Somebody in one of my classes recently mentioned how much they like Beaufort D’été so we were all curious to taste it, since none of us had ever tried it. Neil said it was so good and Mark declared it his favorite of the evening. It reminded me of gruyere or comte so I found it enjoyable. How fun to have access to a “top shelf cheese!” The final one in that “column” was the Smokin’ Goat, one of Suzanne and Mark’s choices. It had a softer texture and I was happy to find out the smoke flavor was on the lighter side not so overbearing as some other smoked cheeses I’ve tried.

The cheese board continues up from the bottom of the left side to stay in order of flavor profile. Since I’m such a fan of aged cheeses, I chose the 7 year Proprietor cheddar. This one stirred up quite a discussion too, we couldn’t understand how it was “aged”, there weren’t any of those crunchies that we all hoped for. Mark described it as tangy and sharp, while Neil found it to be surprisingly sour. I agree that it was sharp and tangy but I did learn recently that cheddar just gets more sharp as it ages. I guess it tasted the way it should, we were just hoping for something different. I think Wavereumont was another new cheese for all of us but I forget who chose it. There were funky and sour aromas with a medium texture and smooth flavor. Suzanne picked out the papillon roquefort blue cheese. Neil and I always love blue cheese so we were game for trying it. It smelled a little smoky and had that distinct blue cheese aroma and flavor. It was yummy.

There were still two cheeses remaining. Many of you regular #WineAndCheeseFriday readers know how much we enjoy the wensleydale cheeses with fruit. Suzanne let me know that she enjoys many cheeses but doesn’t usually gravitate towards fruit in her cheese. No hard feelings, Suzanne! I thought it had a nice texture that was creamy and reminded me of dessert. We intended to add in the Tomme St Georges cheese too but made the mark a little different on our original checklist so it got overlooked. Once we realized, we had them bring it over separately and I forgot to photograph it. Too bad we don’t have a photo because it was really good with salty, rich aromas and a medium texture and milky flavors. Another good one.

Some of you might be wondering how we could eat anything else after all these cheeses but I still had plenty of room to try out the charcuterie platter too. Whenever Neil and I want meats with our cheese, we typically get dry salami or maybe some prosciutto, if we’re feeling fancy, but these all seemed new to us. We’ll be discussing them from the top to the bottom of the board. The Sour Ale Salami from Colorado had a soft texture with a mild flavor. The second salami from Wisconsin was made from goat’s meat, which I seldom eat. There was spice, a lot of flavor and it was my favorite. We decided to try some Bison too, from Colorado, and prepared similar to pastrami. It looked like roast beef to me and didn’t seem all that exciting. The final one was the House Smoked Duck from Indiana. Neil is allergic to all poultry so he refrained and although I don’t really eat birds anymore, I did try some duck recently. There was a chewy texture and it really wasn’t for me. I’ll have to let my Jamaican friend know how much I liked the goat salami. She’s the only person I’ve ever had goat’s meat with before. 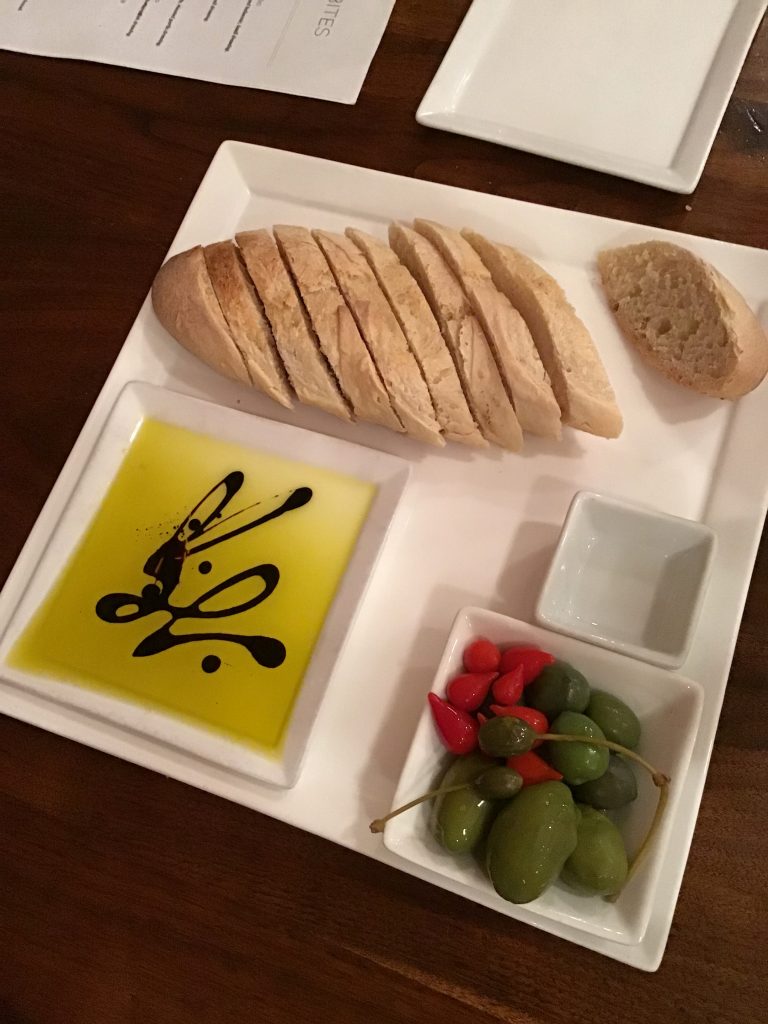 We enjoyed cleansing our palate with other tasty bites that came with the platter. The olives were very fresh with a nice flavor. And of course we can’t forget that oil and vinegar that made such a statement being in the shape of a rabbit! The nuts and crackers were very good too. We probably didn’t need anymore food but there were two small plates that caught our eye. The first one was a fermented bok choy salad but it was prepared as eggs. Not a bad flavor just a little confusing. The other was the beet polenta and it was so flavorful. Neil and I both enjoyed it and were delighted to see that it had some bok choy too. So many delicious things to taste that night. 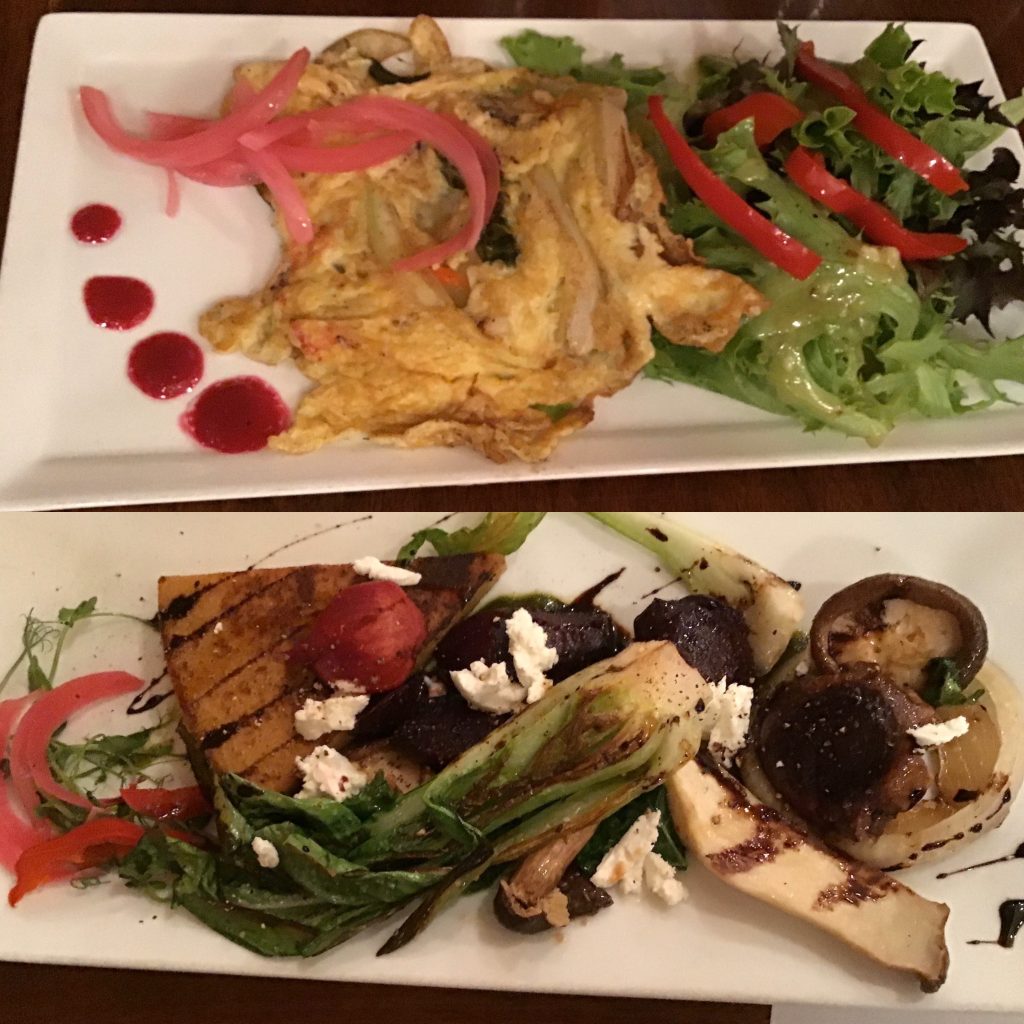 I’m so happy Suzanne and Mark chose to take us there. I was telling our cheese teacher that we went and how excited I was that there were around 30 cheeses to choose from. She asked if we tried them all? If I were in Fort Collins more than one night, I think I might have attempted! Guess we’ll just have to come back again.

Before we wrap up the entry, I wanted to let you all know that the next day I was still thinking about that red blend. We headed back to see if it were possible to purchase a bottle to take home. Due to their license, we would have had to open it there so it didn’t work out. We even went to a couple of the local liquor stores to find it but sadly we couldn’t. I guess I’ll be hitting the internet to see where I can get it. Maybe you’ll see it resurface in a future WineAndCheeseFriday entry? 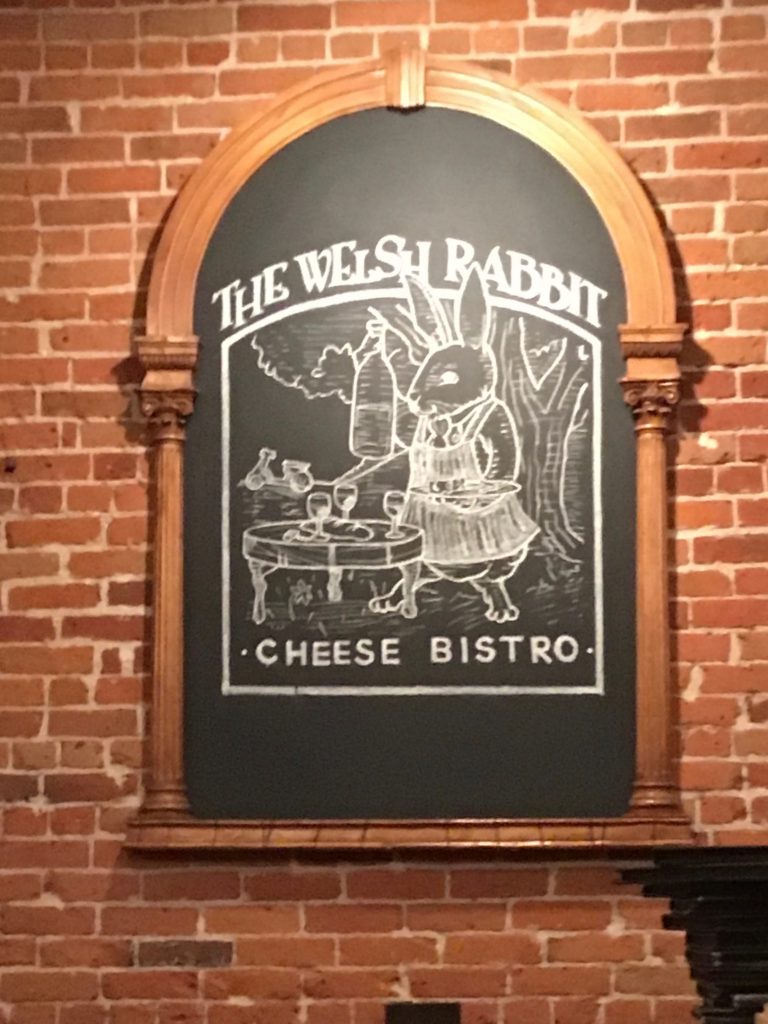