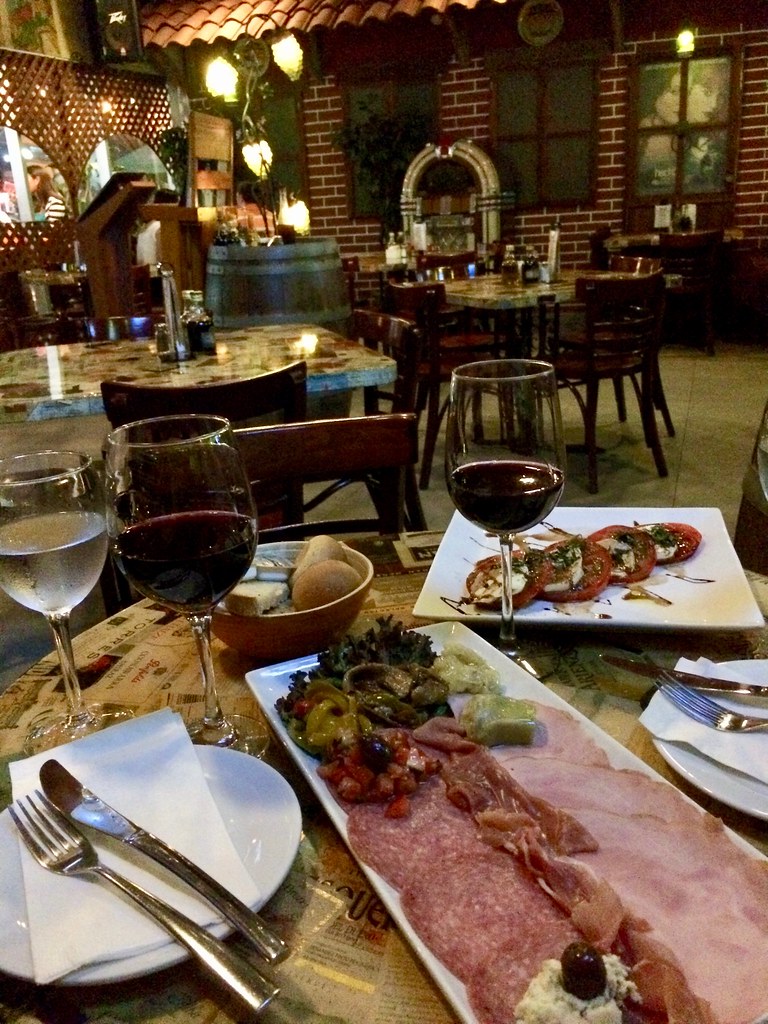 On our final night in Panama, we decided to head across the street from our hotel for a wine and cheese treat. We couldn’t have predicted the feast of wine, cheeses, veggies and italian meats, that would follow. We were overdue for this type of indulgence after all our time in Central America. It just so happened that they offered fondue too so how appropriate for us to feature this dinner just days after #CheeseFondueDay.

We were so excited to read through the wine list, but of course it took some decision making skills to figure out what we’d be ordering. The food menu had lots of options too but we decided to order a meat and cheese plate, a caprese salad, and some fondue. Our table was snuggled in a corner but a bit too small for all those plates. Don’t worry, we just played musical plates while we enjoyed it all.

Neil had an easier time choosing his wine than Maria did. He found a Beni di Batasiolo Barbera d’Alba. Maria was between two different wines but tried the Casal Garcia Douro Vino Tinto from Portugal. Although we each had our own wines, we shared a taste with each other so we could see who picked the better wine :). 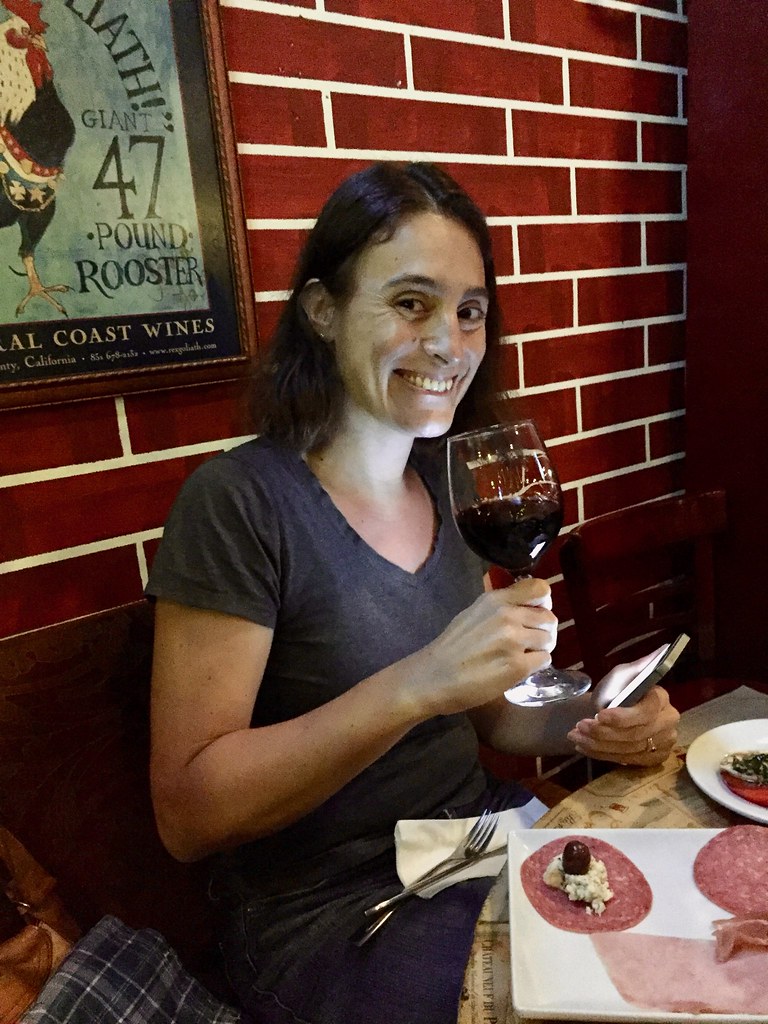 Neil picked up plums in the Beni di Batasiolo Barbera d’Alba and said it was good. After all, we were trying to enjoy ourselves not spend forever on notes. I thought the Barbera had flavors of prune and black licorice. It wasn’t really what I was looking for so I happily handed it back to Neil. The first aroma I noticed in the Casal Garcia was rubber tires. Luckily that was fleeting. There were soft red fruit aromas, dry, tart, cranberry flavors with some spice. The flavor became aromatic in my mouth during the wine finish. Neil found smoke in my wine and said it was big and really good.

The caprese salad was really fresh and tasty. Both of also enjoyed pairing the gorgonzola cheese with the grilled onion. We’re not sure why it was so good but maybe the onion was marinated? We weren’t really being strict about pairings that night but the Casal Garcia Douro Vino Tinto wine softened when it was paired with the foods. 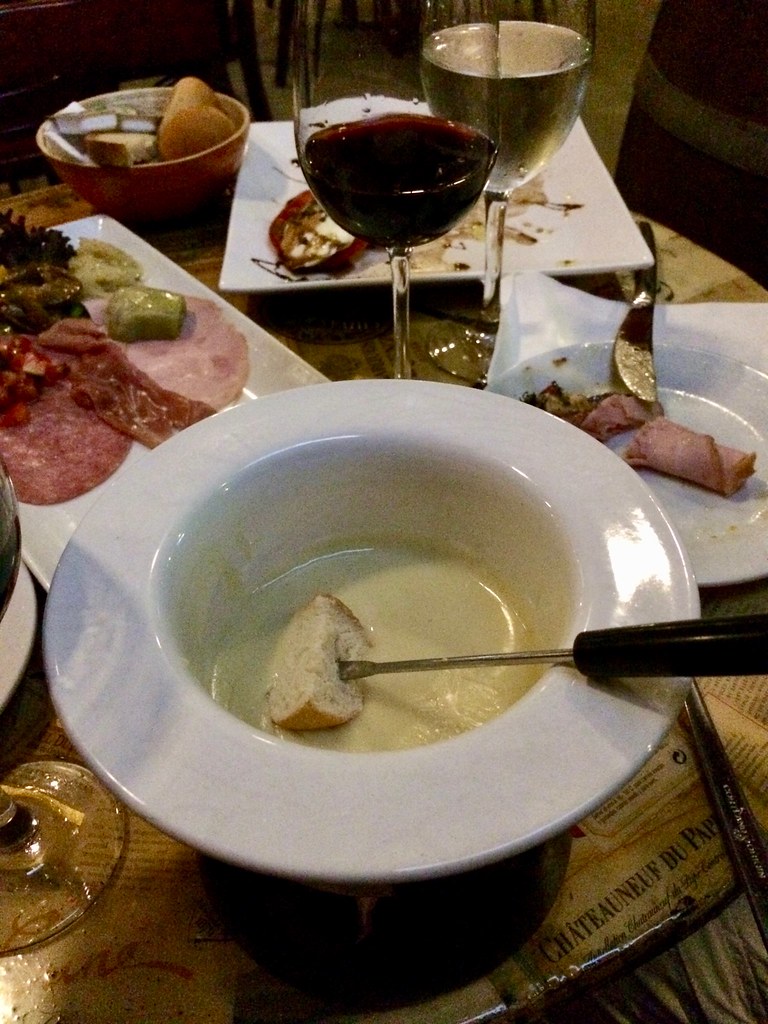 This was probably only the second time we’ve ever had fondue in a restaurant. Since Neil is gluten intolerant, we can guess why. We figured out he could dip the ham slices in the pot instead of the bread. It reminded him of a Croque Monsieur and he described it as really rich! We did get a little more in-depth on our tasting notes for the fondue than our other pairings. Neil picked up the funky aromas of the fondue and I made note of the smooth, creamy texture. The flavor was a bit tangy too. I felt like I must have eaten an entire loaf of bread, by myself, with the fondue but it was delicious. Neil also had his share of ham and we even had to order an extra plate of it. 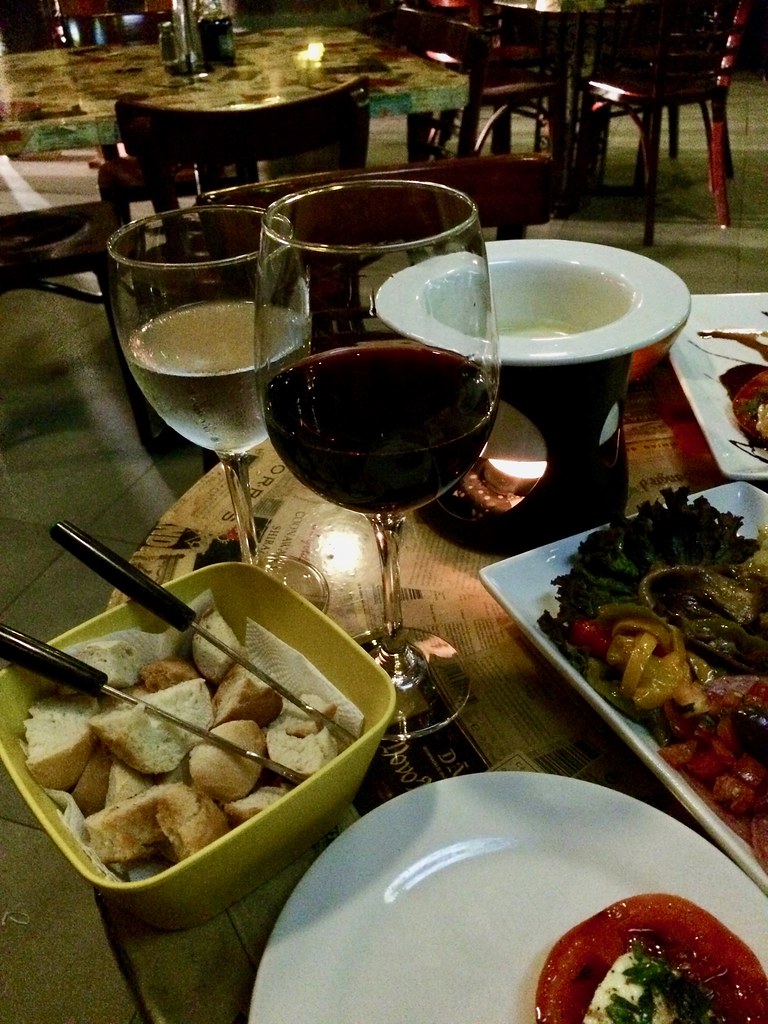 Once our wine glasses were empty, it was back to surveying the wine list to see what we’d pick for our second glasses. Neil opted for the same Beni di Batasiolo Barbera d’Alba but Maria narrowed it down to two different wines again. Luckily there was a sommelier available for us to speak to for wine advice. He was very helpful, carefully describing the wines to us. I chose the Castello Banfi Col di Sasso Cabernet/Sangiovese. Neil enjoyed sipping his Barbera while Maria pondered the tasting notes for her second wine. She noticed red licorice and red berry aromas and the thicker body of the wine. The flavors were berry and sweetness with some spice. Another wise choice! Neil picked up cherry cola flavors but went back to his Barbera.

By the end of the night, I don’t think either of us wanted to eat another bite but what a nice way to wrap up our trip to Panama. Before leaving, Maria gave the sommelier her WineAndCheeseFriday business card and that opened up a whole wine discussion, in Spanish. We happily conversed, in our second language, about the wines we’d been finding during our time in Panama and how it was our last night there. The sommelier got really excited to have someone to talk to about wine and recommended trying a Chilean wine called Caballo Loco that was created in a European style of blending vintages.

Definitely a fun night and who can argue with the number of steps to get back to our hotel. 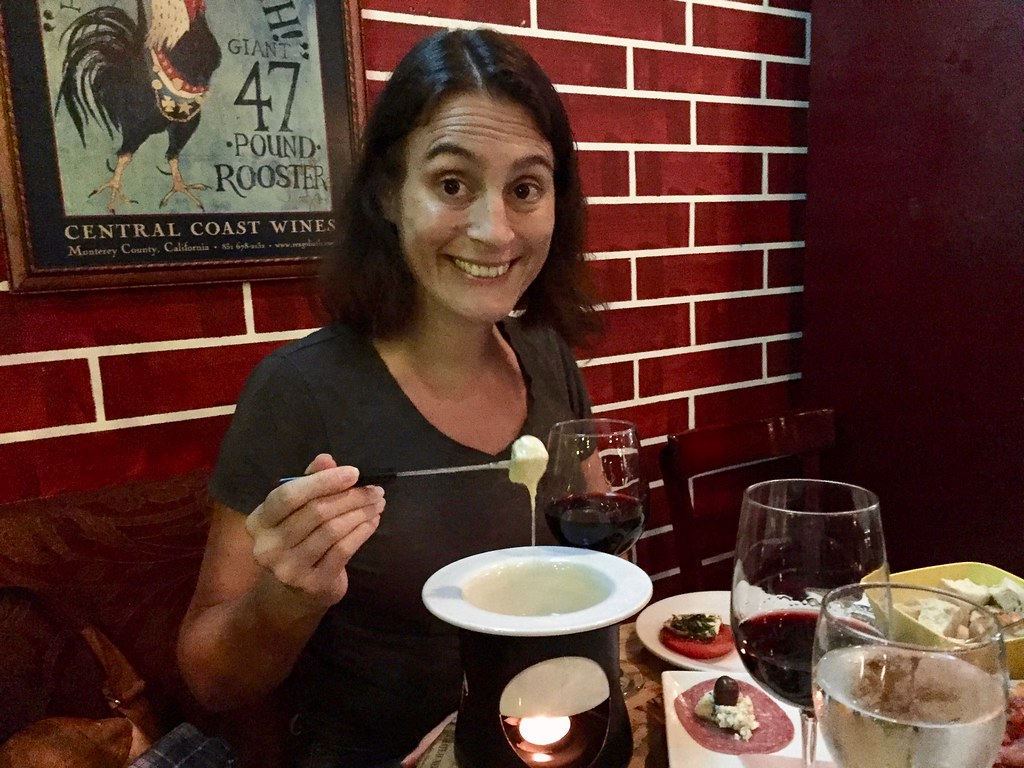