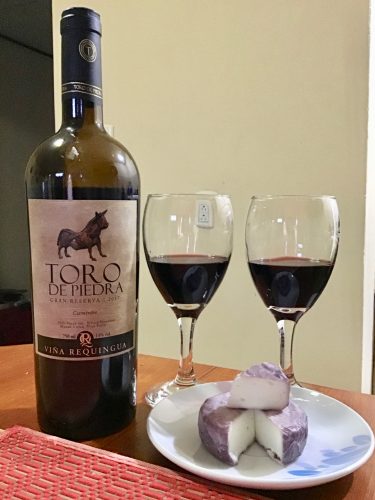 Today’s entry is being written poolside in Puerto Jimenez, Costa Rica. We did this pairing in Quebradas, Costa Rica, just outside of San Isidro de General, our “home” for the past 8 months. For a change of scenery we decided to come out to Puerto Jimenez for at least a month. I’ll take the opportunity to sit outside, listen to the waves and birds and get some work done!

The wine brand, Viña Requinga (Toro de Piedra) is a Chilean brand. This should come as no surprise to you, since we review so many wines from Chile during our trips to Costa Rica. The grape, is Carmenere, one of our favorites from Chile. The cheese brand, Quesos Biamonte, is another familiar face for you regular readers. It’s a Costa Rican brand of cheese that we’ve taken a liking to this trip. I’d guess this is our 3rd cheese from them on the blog.

As you know, we started by swirling the wine to identify the aromas. Neil and I both exclaimed “smell those berries!” In addition to the berries, there were black pepper and earthy aromas. The texture of the wine was a little on the softer side and a wide range of flavors presented themselves. Neil described this Carmenere as having notes of berry, pepper, and slate. It was a very big flavor that moved all over his mouth. Then after a few minutes it shifted to have a graphite flavor. I picked up earth and dark fruit with a black pepper finish. After that the acid came out as well as the dryness.

We told you that we like this grape but we’d both say this is a slightly more upscale version of it. The wine was classified as “Gran Reserva” and I think it was a little more than what we usually pay. It was most likely only around $20 though. Most definitely worth finding something a little better this time since we really enjoyed it!

You’ll notice one very obvious thing when you look at this cheese, the outside is purple. Since there isn’t much online about this brand**, I don’t know this for sure but I’m guessing it might be soaked in wine? We’ve had a few different types of cheese with this affinage technique and they’re usually named something like “drunken goat”. I mean how can you go wrong soaking a cheese in wine?? I don’t think you can. This version was called “Morabia” which I found out is a town near where it’s made, so I’m not really sure. 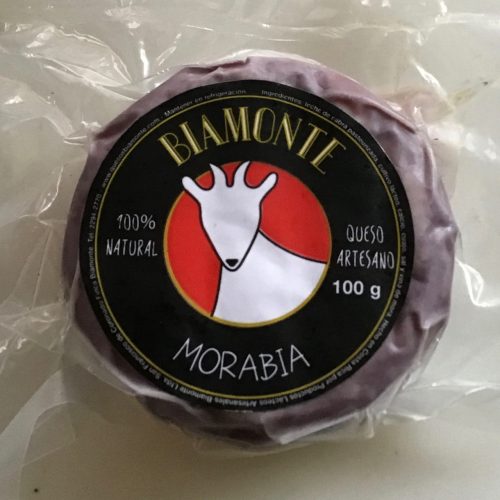 Whether it has been aged in wine or not, I already knew this was going to be a good cheese when I opened the package. It smelled so good, just like sweet berries. In addition to the berry aroma, I also identified salt, milk, even more berries and vanilla too. Neil agreed that it smelled great with amazing sweet aromas and the cream from the cheese. He could tell this was something familiar to him with fruits and cream. Then he figured it out, it was like the grape version of a strawberry shortcake ice cream bar! Yes!! And it was somewhat aged, which always scores points with me. The berries, tart goats milk and salt were so yummy.

So we’ve got a berry wine and a berry cheese, what’s your guess, will it be a good pairing? Let’s find out. I thought the wine gained blueberry aromas but lost a bit of the pepper. It was definitely spicy, so much that it tingled my tongue but then the flavor really mellowed and the dryness cleansed my palate. The cheese had the same aroma and dried my mouth but there was more of a berry finish. That’s one vote for a good pairing since the berries shifted around a bit.

Unfortunately that’s the only vote for a good pairing. Neil and I typically have pretty different palates and he could see that I was enjoying the pairing. He said, “Let me guess, you love it?”. I just continued smiling. He found the wine to be too tart with notes of alcohol. Then the cheese got even saltier from the goats milk, and lost its flavor.

That’s how it goes sometimes on WineAndCheeseFriday. We both really liked them separately so we’d happily have them again. Also we liked the wine so if we’re lucky, we’ll find that in the stores again.

**I was able to get in touch with the cheesemaker just before posting this entry and they confirmed my guess. Not only is this cheese soaked in wine but it’s a blackberry wine, no wonder it had such delicious berry aromas! 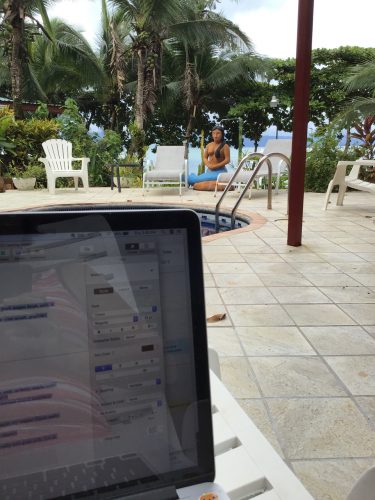