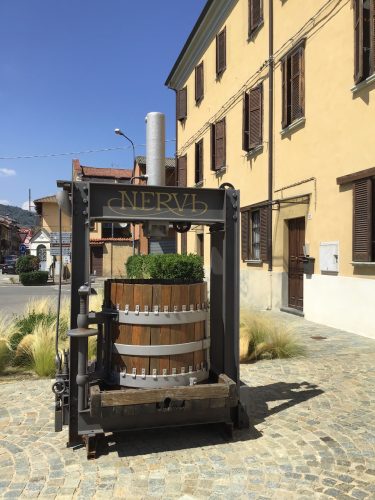 Our second wine tasting in Italy brought us to Nervi, the oldest continuously operating winery in the Gattinara region. If that isn’t enough reason to visit, it’s also run by Roberto Conterno of Giacomo Conterno fame! We taught you a little about the Barolo region during our last entry and that’s where Conterno’s main winery is. This is a recent project for him just having purchased Nervi in 2018. 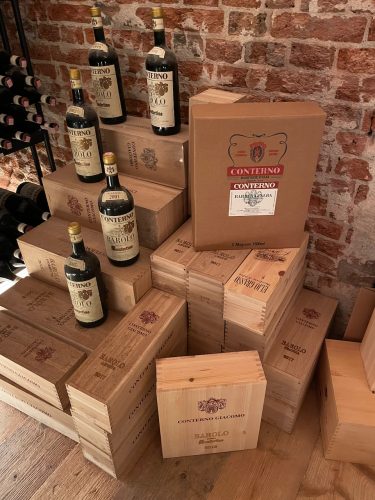 Gattinara is a DOCG wine region located in the North West part of Piedmont which meant we were in for another car ride. Luckily this one wasn’t quite as far as our first, only one and half hours East this time from Aosta Valley. Our friend Matteo had the connections to get us into this winery too and we’d be bringing a few other friends Karol and Matteo from Rosset Winery. 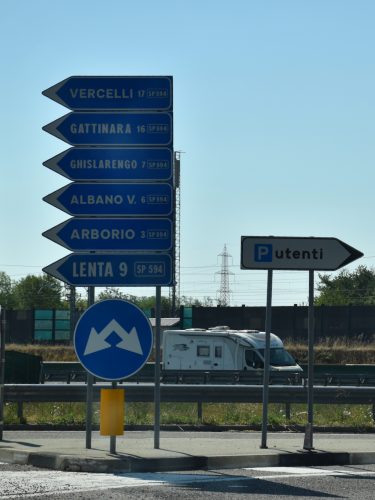 This ride didn’t take us through all the vineyards like before but we were still in the Italian countryside for part of the trip. We passed through the Arborio region, where the rice used in making risotto comes from, just before arriving.

When we pulled up to the winery we could see how modern it was. Once Conterno took over, he began the transformation of the winery with a giant excavation project for the new facilities. He created many glass walls, a floating tasting room and a state of the art cellar and bottling area.

There were many changes made but the old winery area is still found underneath the restaurant on property for their wine cellar. We’d see this part of the building later on in the tour. 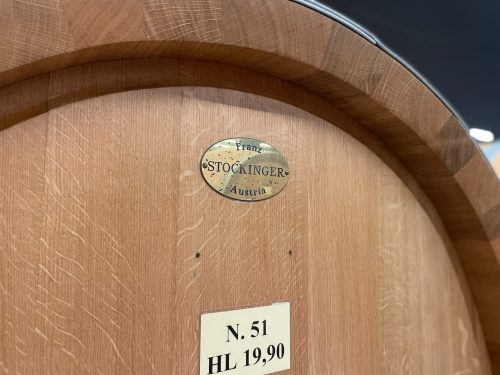 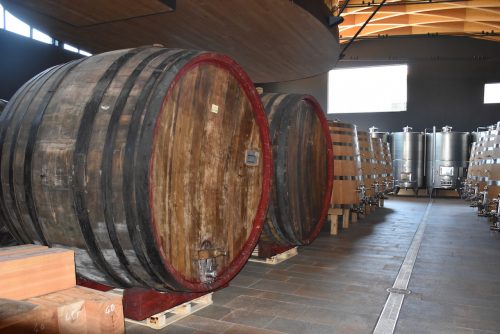 We began in the barrel room, where we saw some giant barrels that would be sent off to another winery in the next few days. The wine barrels are just the beginning of Conterno’s meticulous wine making style. He only uses Stockinger barrels from Austria that are exclusively made for him. 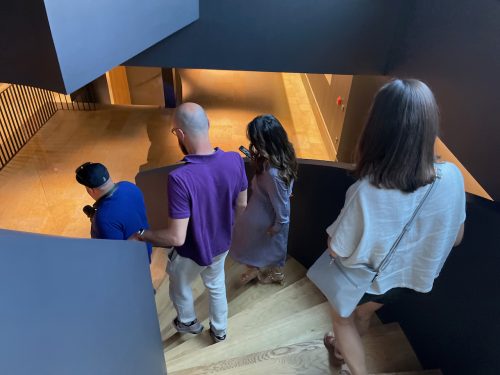 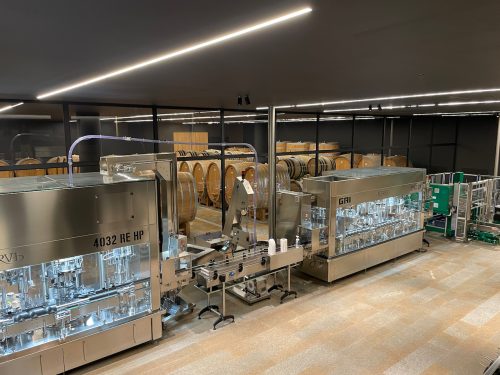 Then we came into the bottling room where Maria’s scientist mind got fired up. The bottling line was totally enclosed in order to make it impossible for any oxygen to enter the bottles during the process. These lines are usually used in milk bottling but I knew them from my pharmaceutical days. Wow, this guy is serious about his wine. Quality is a huge deal for him with the regulated temperature and humidity in the cellar too. It really is like my days back in big pharma! 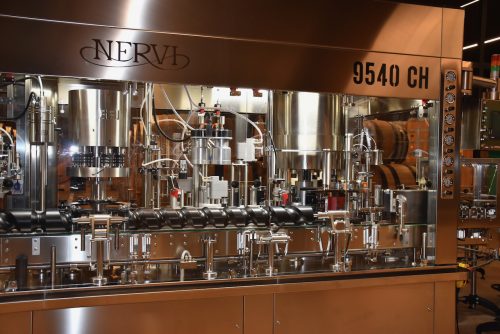 I love seeing production areas because it always takes me back. I think what draws me to it is the organization and structure around it all. Conterno seems to be on this same level. Even his packaging machines have a camera in order to line up the bottles perfectly in the box.

Another thing that wouldn’t surprise you coming from an analytical standpoint is the level of inspection on each cork. Each one is personally inspected, then a laser checks it and to take it to the highest level, an 8 second smell test is performed. Whoa, there’s no messing around here!

To wrap up the bottling room tour, we learned that they actually just did their bottling of the 2019 wines days before. There were about 27,000 bottles of the classic wines and around 12,000 single vineyard wines bottled. This is about half the expected amount of wine as the 2019 vintage didn’t produce as many grapes.

Our tour guide, Elisa, also told us that last year (2021) was largely affected by big hail storms and they lost around 75% of their crops. These first years are proving to be a challenge for the team! 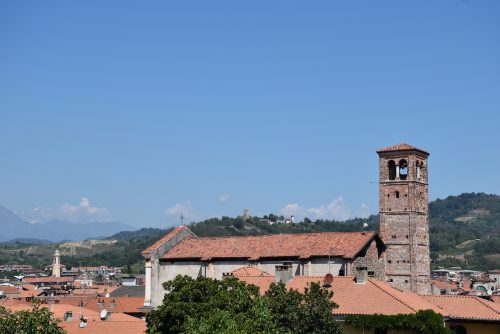 An unexpected part of the tour was that we were going to head out to the roof. We climbed up a short ladder to arrive at the viewing area. Here, you are able to see the nearby vineyards. The Molsino hill was off in the distance and she pointed out that the glaciers cold air passes over it contributing to it’s wine’s flavors. We could also see the Gattinara tower, a local landmark. And on really clear days, you can actually see over to the Aosta Valley (where we had driven from). 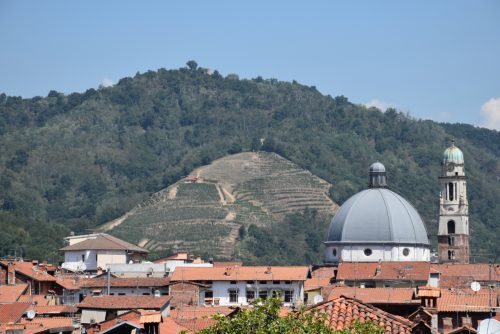 Piemonte is a very well known wine region but it’s gone through quite a few changes over the years. Due to the industrialization of the area and people changing professions, the vineyards have gone from 6000 hectares down to only 800. Gattinara didn’t have many vineyards to begin with but it’s decreased from 800 hectares to only 140.

We wrapped up our vineyard viewing and made our way back to the tasting room. This room is floating above the barrel room and when you walk into it, you almost feel like you’re on a boat. This could have been partially due to the fact I was just on a rooftop though. I’m sure I’ll feel better once I taste these wines!

There were four wines for us to try that day and all of them had just been bottled. Another similarity of all these wines is that they were all made from Nebbiolo grapes. 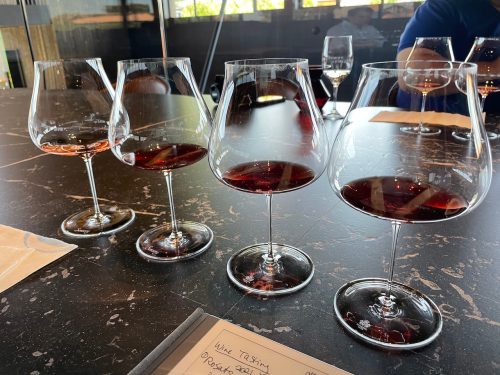 We’d begin with the Rosato, the Italian name for rosé. These grapes are grown in the area but Nervi doesn’t own these vineyards. They’ve perfected just how much residual sugar to leave in the wine so that it’s pleasing for everyone, 3 grams per Liter. I could smell berry and stone fruits with flavors that were clean, acidic and a soft finish. 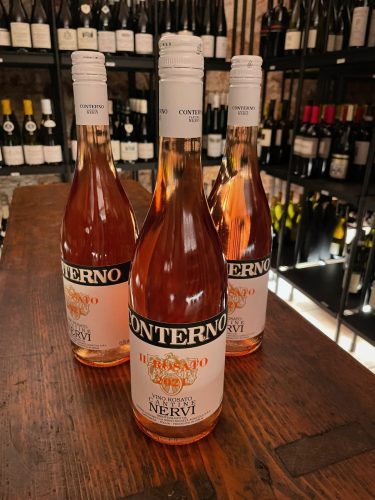 The first red is a blend of multiple vineyards through the 27 acres that they own in the area. It was just bottled but is ready to sell. As I swirled the wine, I picked up big fruit aromas and Neil said it was very good, nice and complex! I was able to identify strawberry, cherry and black pepper as those intense aromas. The flavor initially had fruit, a soft finish and acid. Neil described it as chocolate and dark berries. 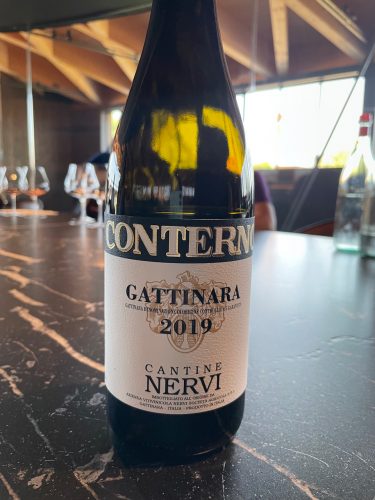 Although the third and fourth samples were ready to bottle, they are not ready to sell yet. They will be labeled after they age for another year but we were able to taste them that day. They are both single vineyard versions produced in the Gattinara region which is also known as the Iron Valley for it’s soil. In order to compare them it was suggested that we taste them side by side. 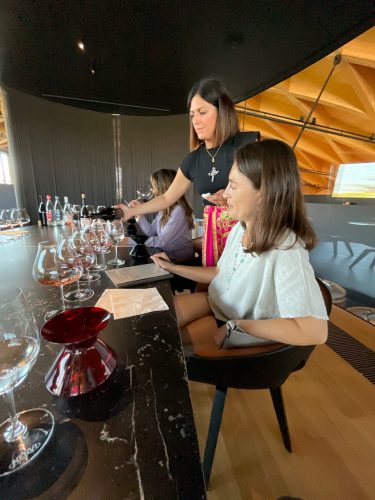 The Valferana vineyard, about 8 hectares in size, contains volcanic soil and is found at around 360 meters in altitude. The aromas that I picked up were red fruit, cloves, and black olive while the flavors were spicy, earthy and cranberry.

The Molsino vineyard has quite different growing conditions with more sunshine, a higher altitude (of 530 meters), but the same type of soil. These sunny conditions cause the grapes to ripen quicker and be harvested sooner. Typically this terroir creates a more intense wine similar to Barolo. I’d agree that this wine did seem a little more bold with the aromas of earth, spice, leather and violets. There were more tannins and then a cherry flavor. Neil found it to be more acidic too.

Since these wines were all newly bottled, it was suggested that we slowly sip the wines and then periodically come back to them. Once I began revisiting the wines, they all started to change a bit. The rosato was more floral and then more fruity with peaches, strawberries and pears. The second wine surprised me with it’s changes to a licorice aroma and distinct cinnamon flavors. The Valferana was changing to cherry but there was still spice. I didn’t notice a change to the Molsino wine.

While we were all sitting there discussing our notes and the tour, we talked about how the red wines will need to wait 7-8 years to be ready to drink once they are released. This is a different spin on wine tasting than I’m used to. In this scenario, it’s about tasting the wine and being able to predict how it will be in the future after the wine has started to evolve. I have found its possible to determine some aromas but pretty difficult to gauge the flavors of the wine today.

During the tour, we were discussing the wineries clientele and how this wine is all purchased in advance. This meant, we weren’t able to take anything home that day. It’s also incredible to realize that on these vintages that produced less wine that there was less wine to go around. Well, that’s all part of the wine adventure. It’s necessary to just take what’s available and savor every drop. And for those people receiving Conterno’s wine from Nervi, I’m sure they’ll do just that. Pretty cool to get to experience this piece of wine culture since we “know a guy!” Thanks again to Matteo for taking us here. Now it’s time for lunch in their restaurant.

On our way to lunch we were able to stop in the wine cellar, built in 1850. The 15 degree cellar was refreshing and beautifully filled with wine. There were wines from Piemonte, Rieslings, Champagnes, and plenty of magnums! What a great way to finish out our wine tour at Nervi Conterno! 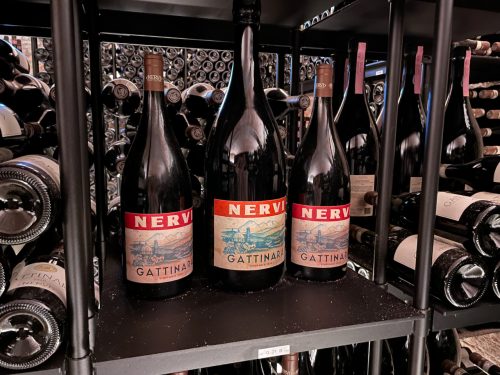 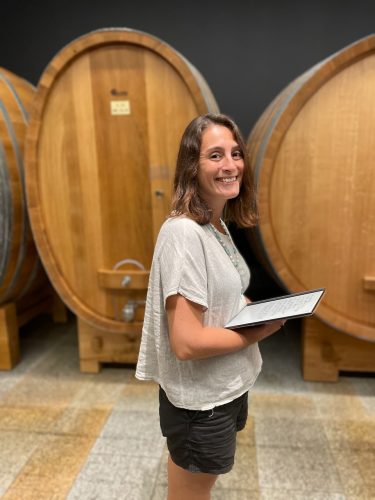