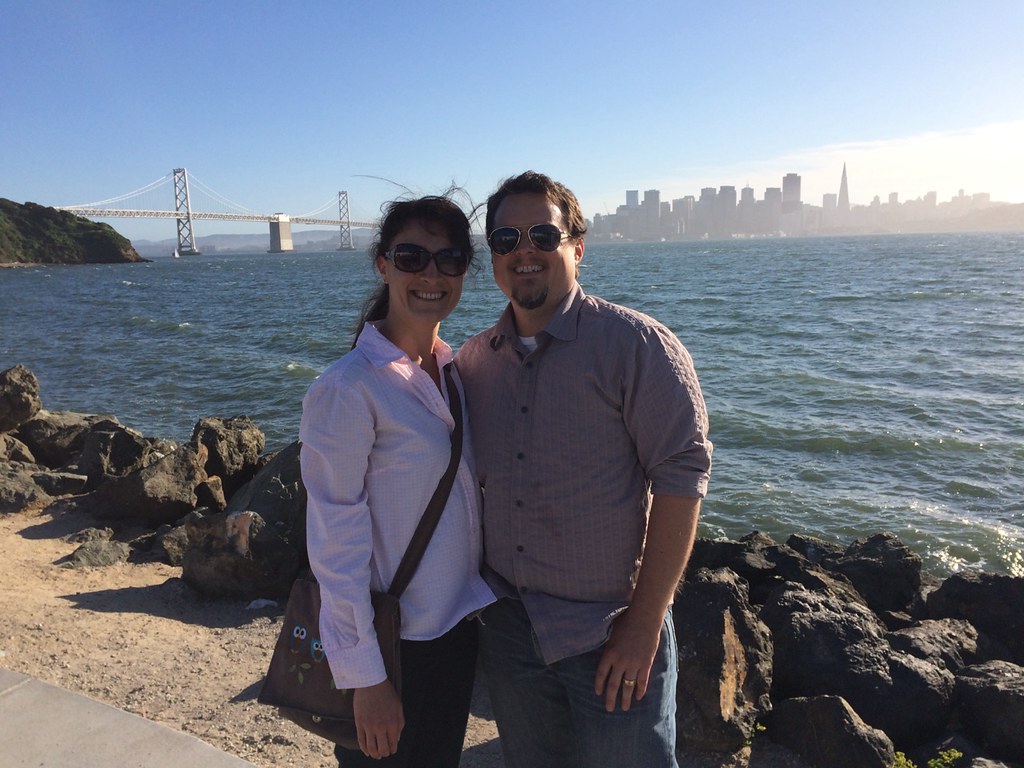 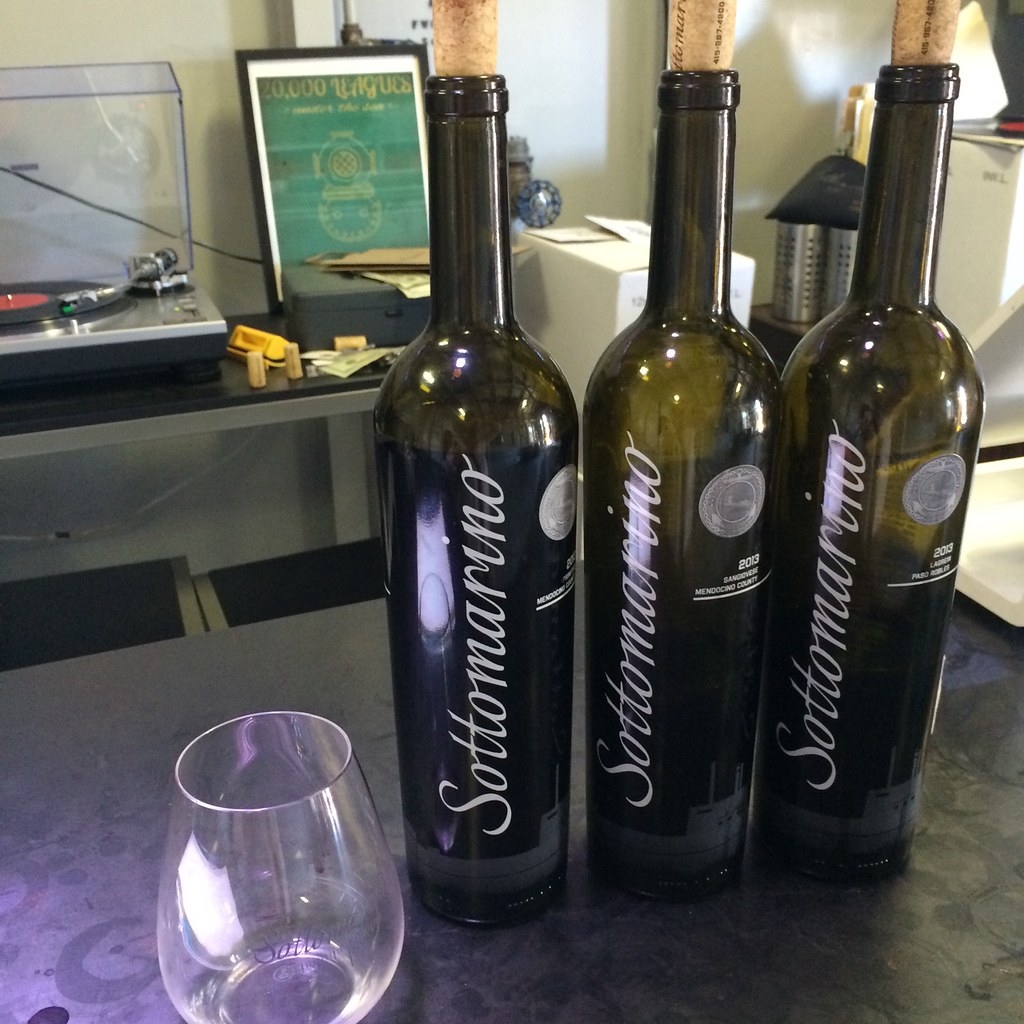 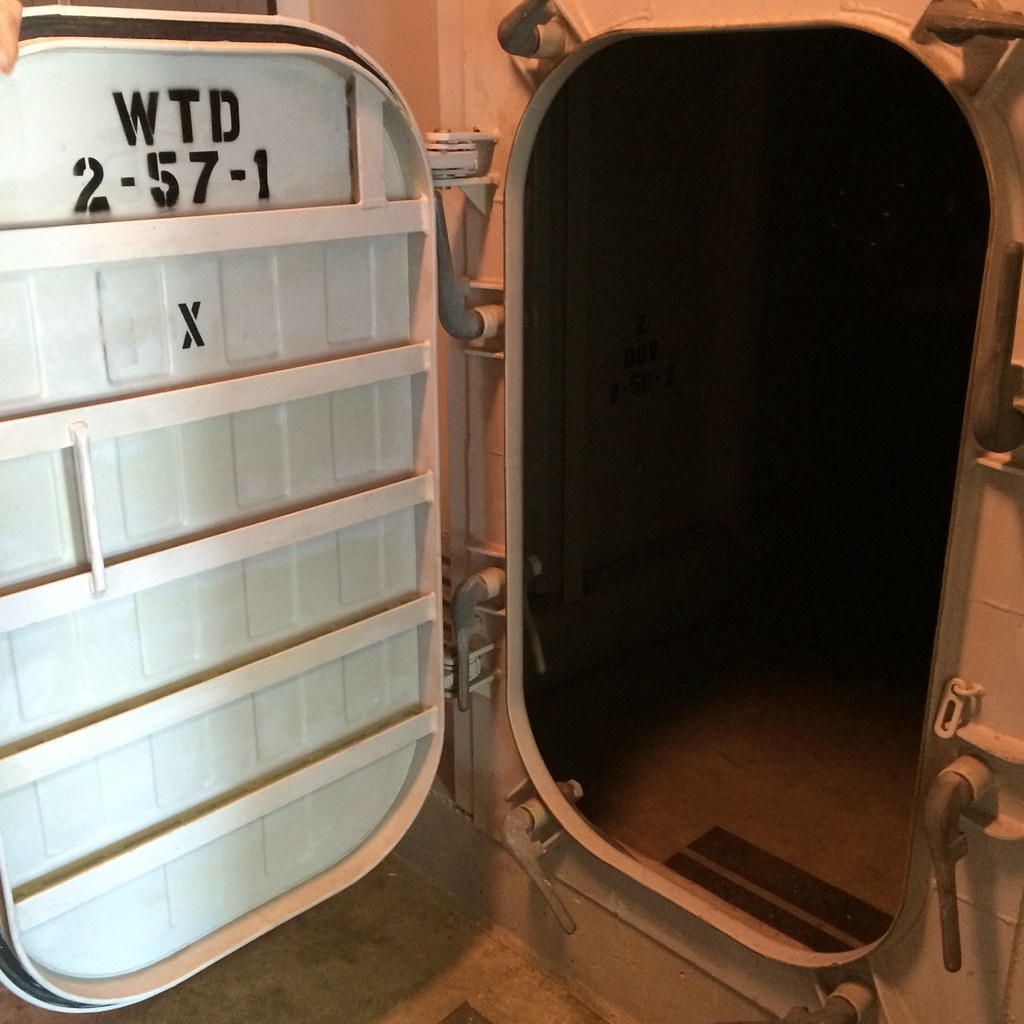 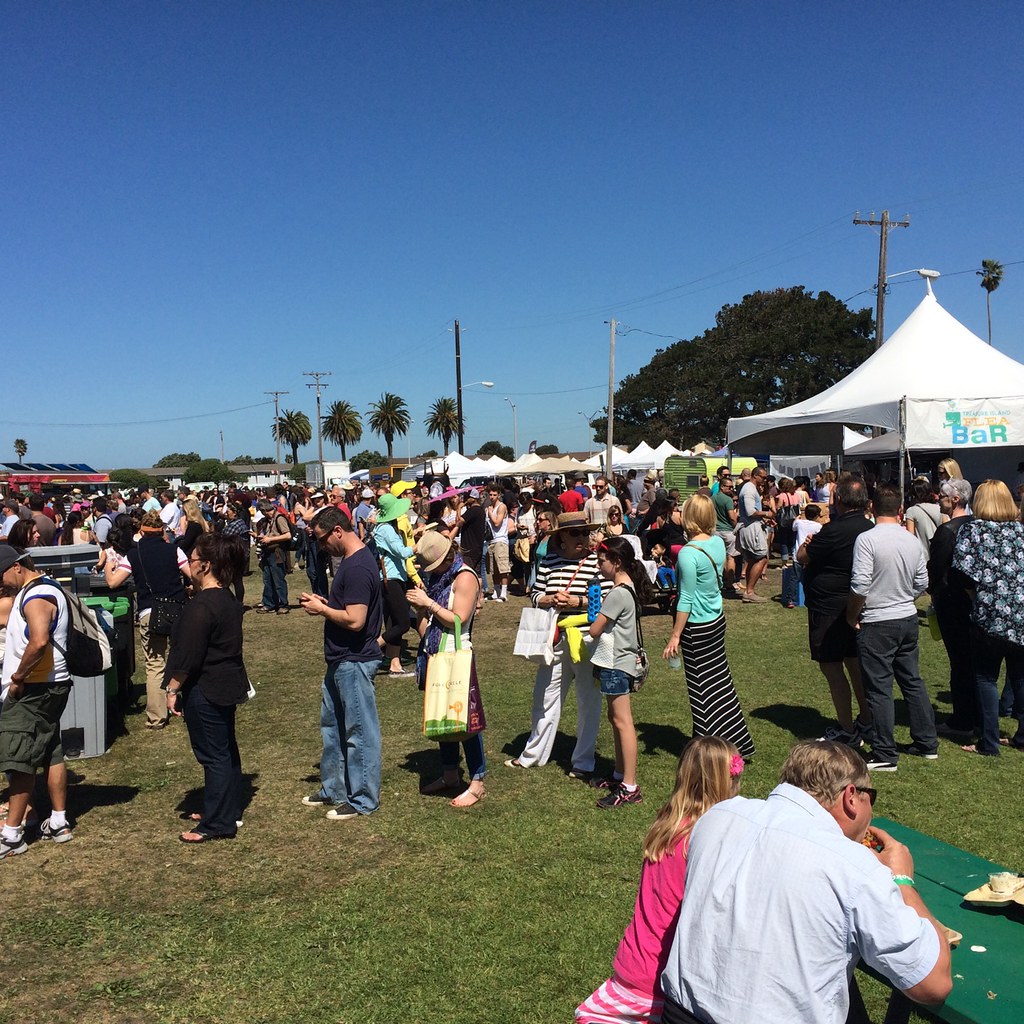 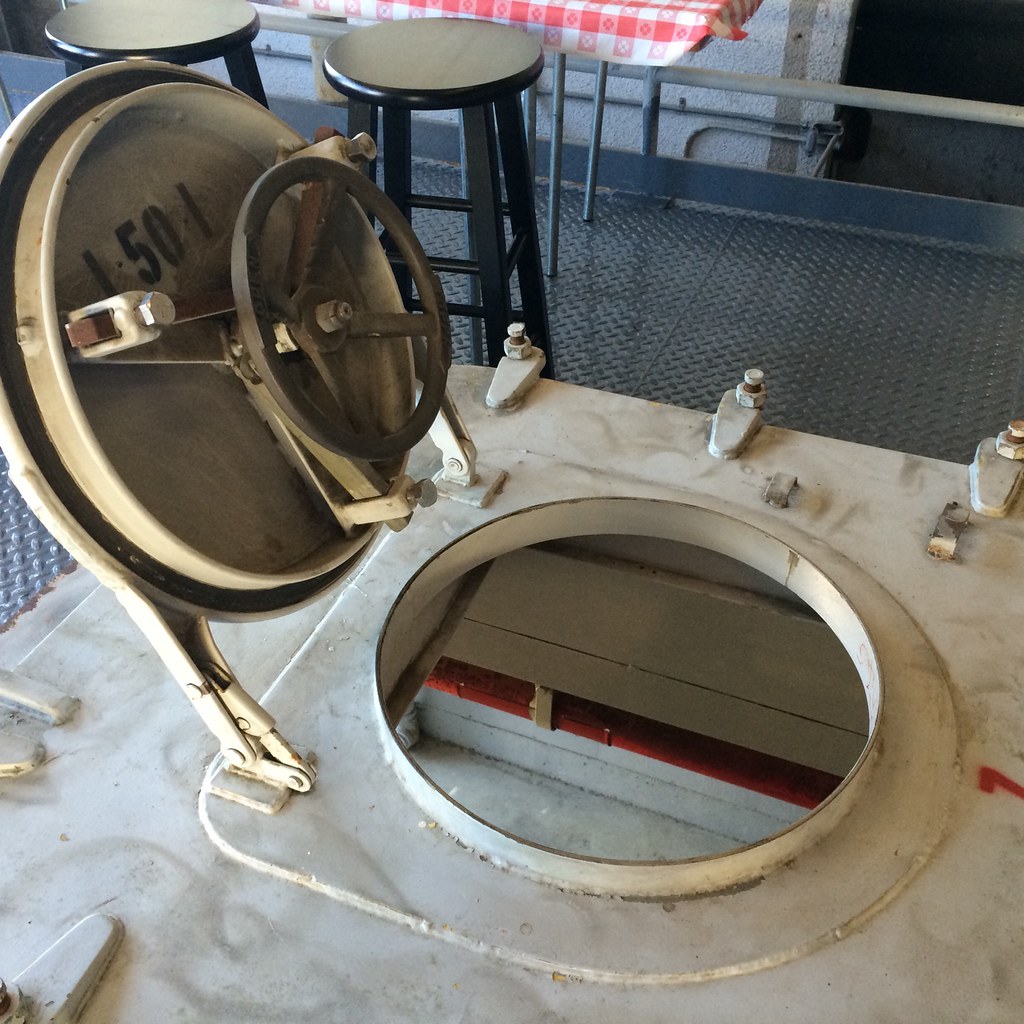 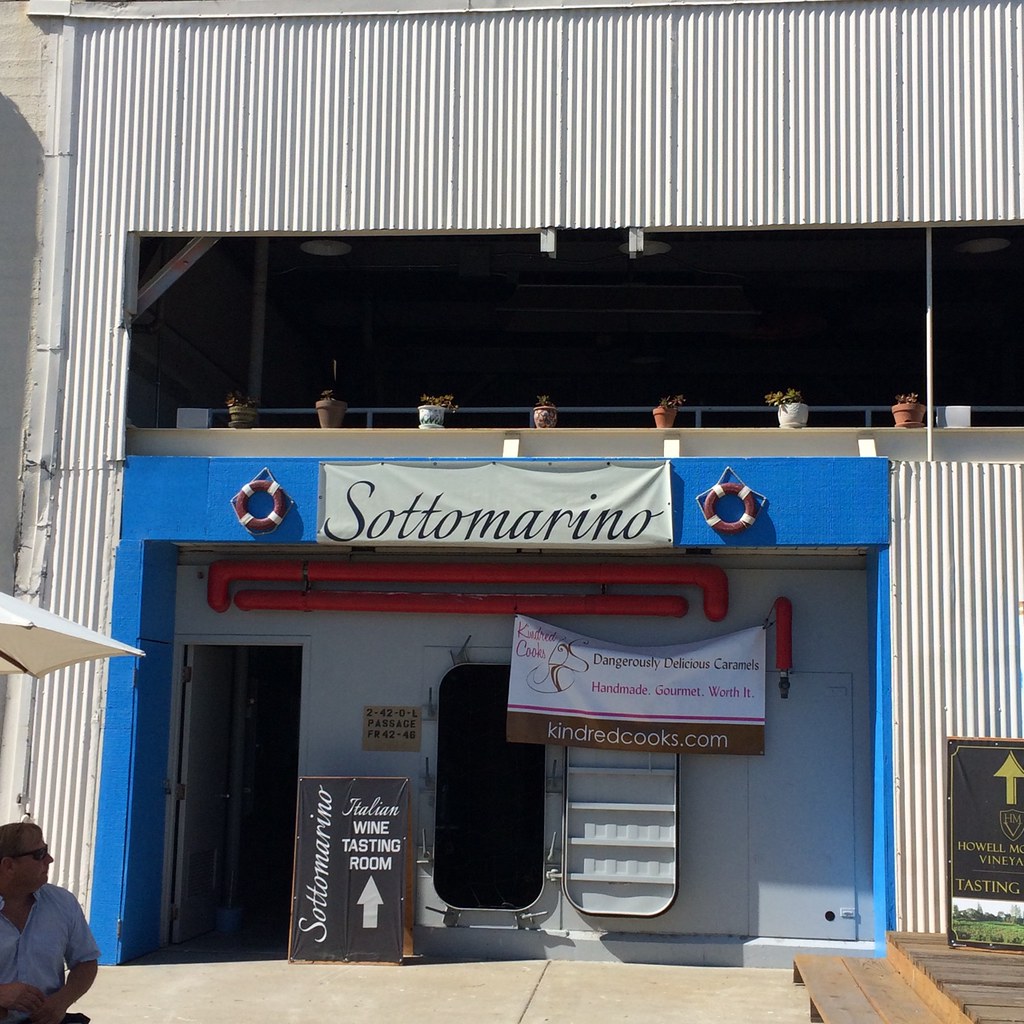 It had been quite a while since we visited Treasure Island, so we decided to head there last weekend. On the last weekend of every month, they hold the Treasure Island Flea Market, which includes vintage goods, tons of food trucks, hand-made gifts and more. (http://www.treasureislandflea.com) It has evolved quite a bit since I used to pour wine there for one of the Treasure Island wineries! Speaking of those wineries, they have expanded their tasting rooms, now called Winemaker’s Studios, http://www.sfeventvenues.com/index.php/san-francisco-event-venues/winemaker-studios, to represent four brands, just behind the giant Winery SF, http://www.winery-sf.com, at the main gate of Treasure Island.

I had not visited Winemaker’s Studios since they expanded so we figured we’d hit the Flea Market for lunch and some sunshine and then make our way to the wine tasting area. The four brands included at Winemaker’s Studios are Sol Rouge, VIE, Sottomarino and Howell Mountain Vineyards but today’s entry will focus on Sottomarino.

Sottomarino, http://www.sottomarinowinery.com, is a brand that had their first vintage released in 2014. They focus on Italian varietals grown in a few regions across California. Their name means submarine in Italian and is a tribute to where their tasting room is located. The building was used to simulate a submarine for the Navy when they were operating on Treasure Island. Now the space has all of the charm of a submarine as well as being a cool place to taste wine. Although we had not made it out the tasting room before, I had previously tasted the 2013 Pinot Grigio and the 2013 Muscat Caneli.

We began the tasting with the 2013 Pinot Grigio, which we both identified the same aromas and flavors. We smelled lemon and maybe some melon and noticed a tart flavor and light texture. These notes are on track with what I remember the wine tasting like when I tried it before.

The 2013 Primitivo, had a distinct strawberry aroma and a hint of slate. The wine was dry, slightly sweet, and light with strawberry flavors. Neil noted that it wasn’t heavy like Zinfandel, a close relative to this grape. We enjoyed this wine so we purchased a bottle to use for a future WineAndCheeseFriday.

I didn’t find the 2013 Sangiovese to be as fruity as the 2013 Primitivo. We agreed that it was dry but also Neil noticed jammy aromas, a thick texture and a hint of flowers.

Up next was the 2013 Lagrein, a grape we are not familiar with. I did a little research and apparently it’s not a very well known grape due to it only growing in a few select regions. It seems we did a pretty good job identifying some key flavors and aromas though. I picked up a licorice aroma and a chocolate finish. Neil said it was tannic and in an effort to compare it to something more familiar, it kind of reminded him of a Cabernet Sauvignon. Although I found it to be dry it was also light. It seems like a varietal we’d enjoy trying again to get a better handle on it.

We were fortunate to try the 2013 Dolcetto before it was officially released. Neil and I had differing opinions on whether it was a dry wine. He called it jammy, flavorful and not dry. I found it to be dry with a light fruit and a strangely, a latex aroma.

We didn’t taste the 2013 Muscat Caneli this day but it is a wine I used to sell at the Winery Collective. This wine was included in our “sweet flight” and although it was sweet, it was flavorful, smooth and kind of light. My description was “summertime in a glass” and that it would be a great wine to sit by the pool and relax!

The wine tasting was lead by Tony, the brand ambassador there. Thanks for introducing us to this up and coming brand! And who could resist a trip to a submarine.