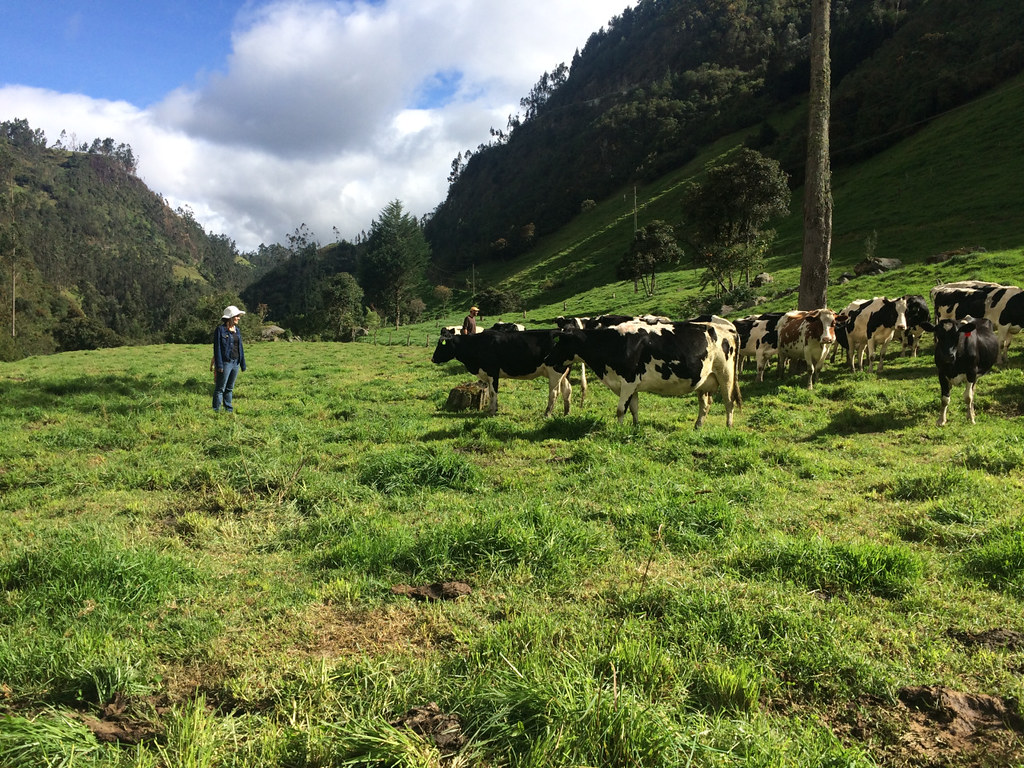 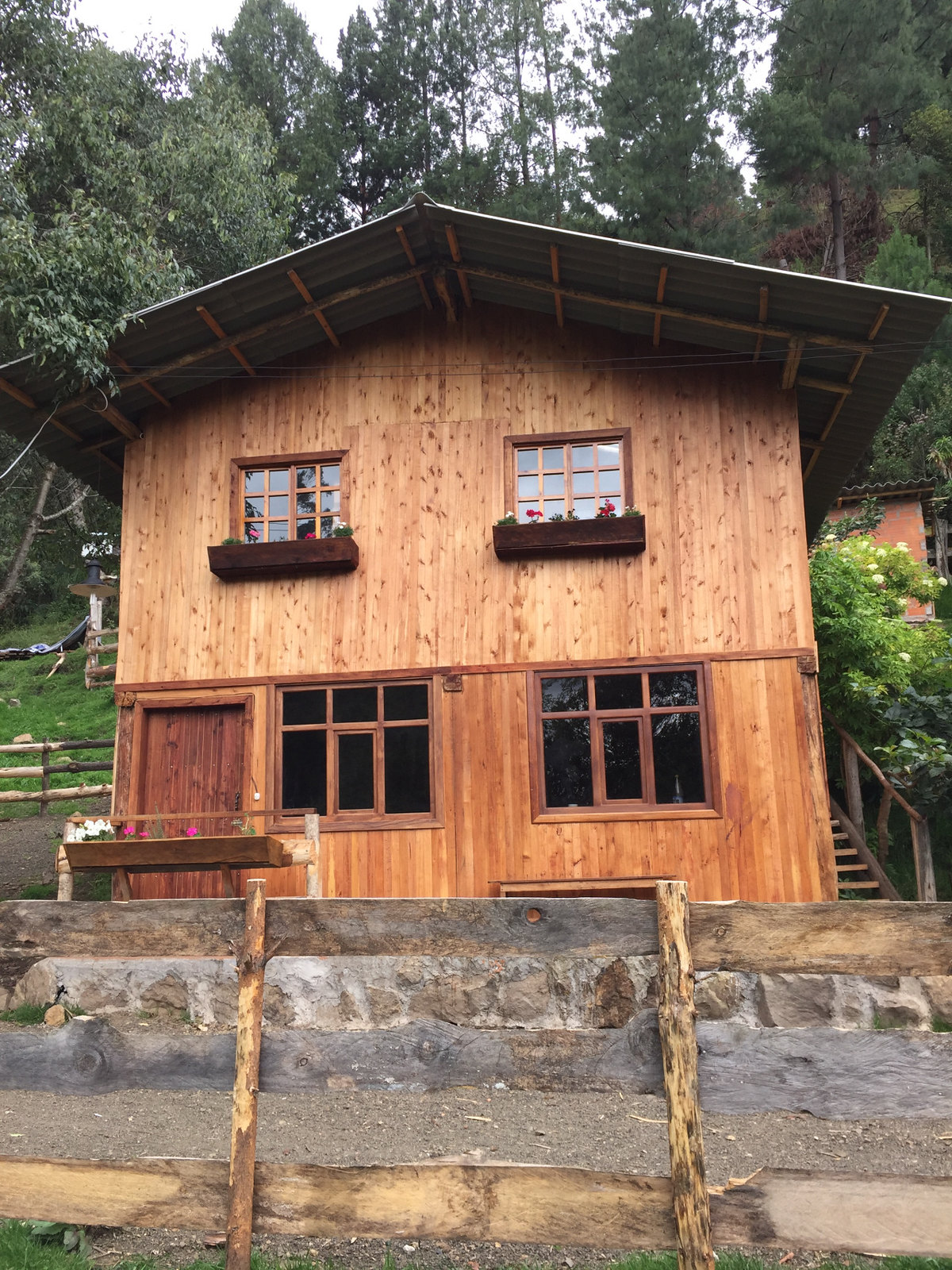 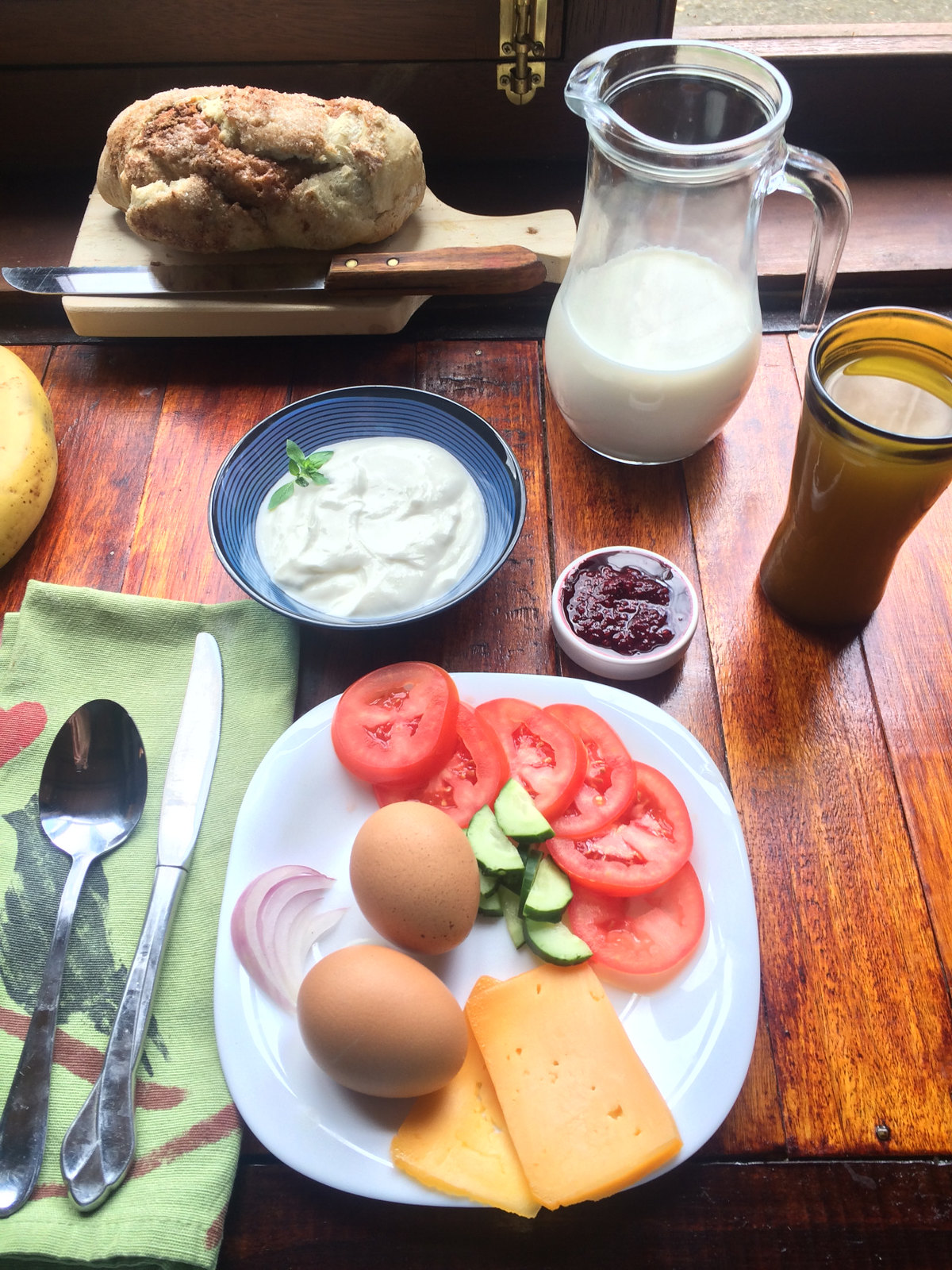 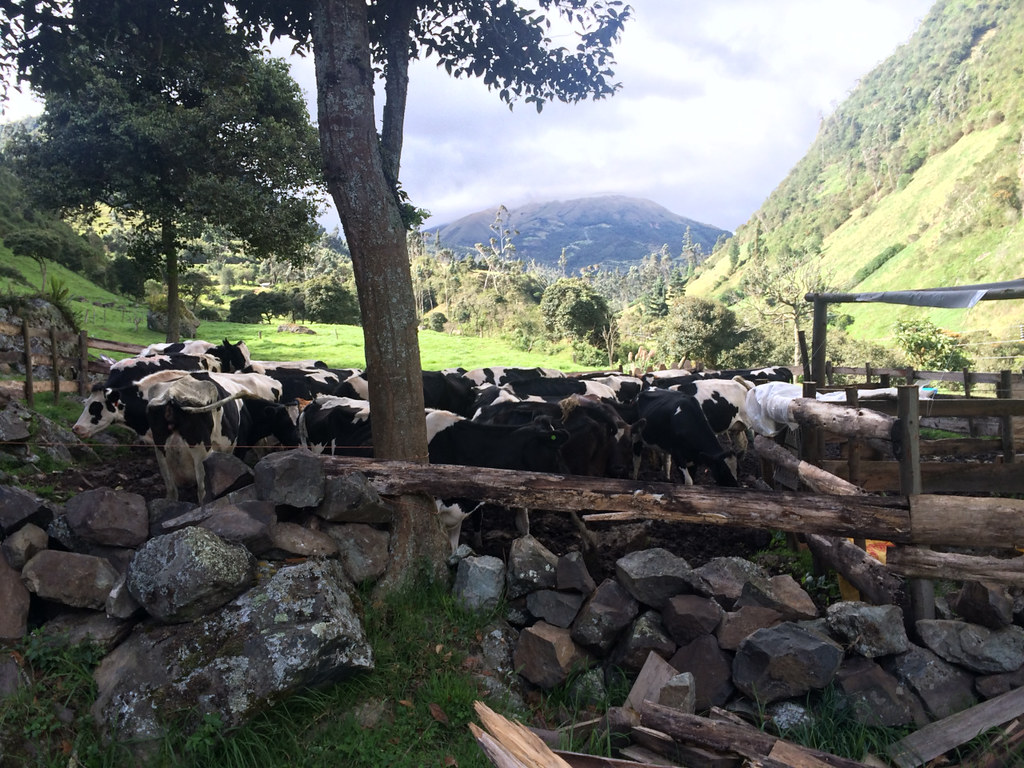 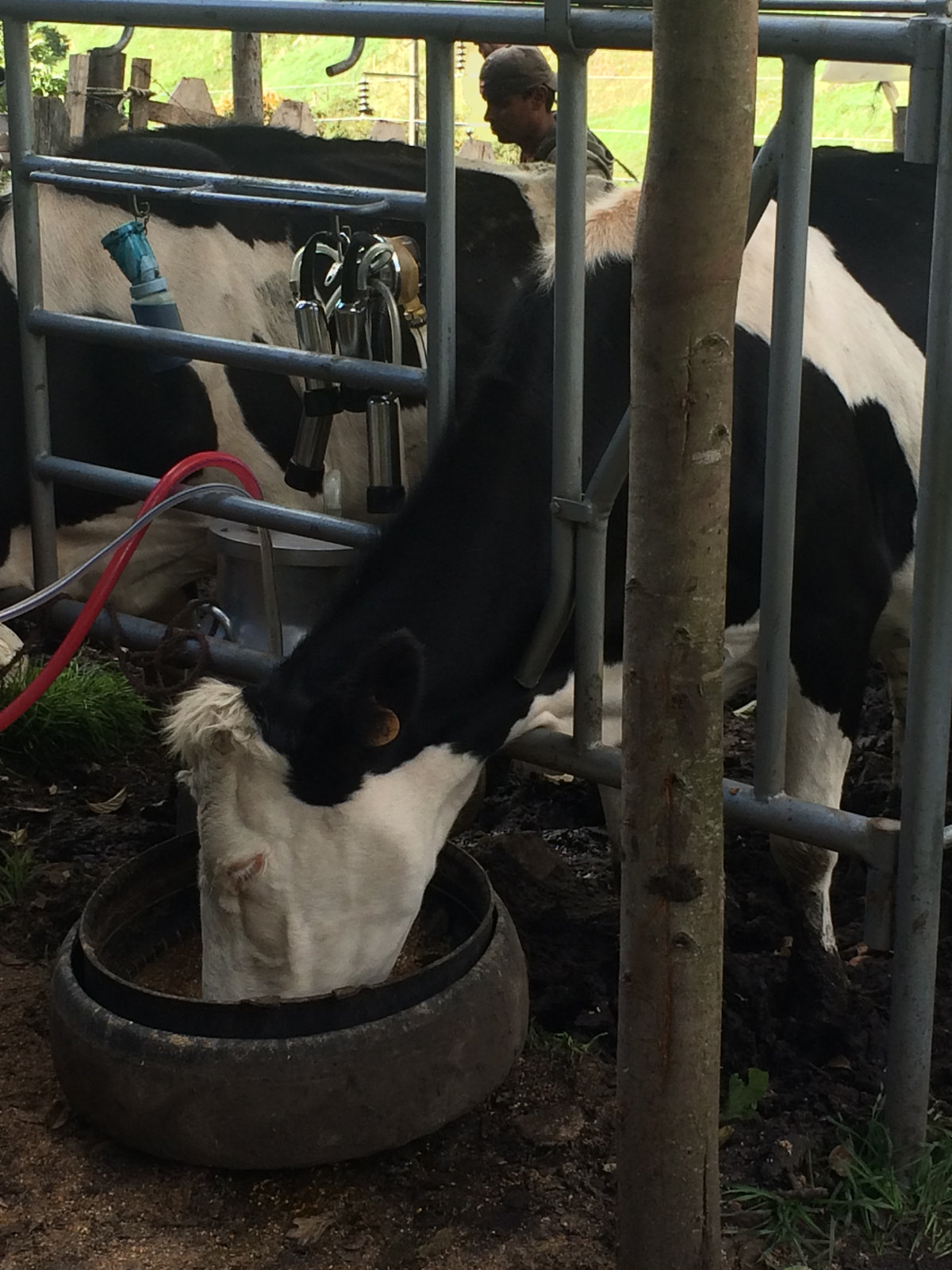 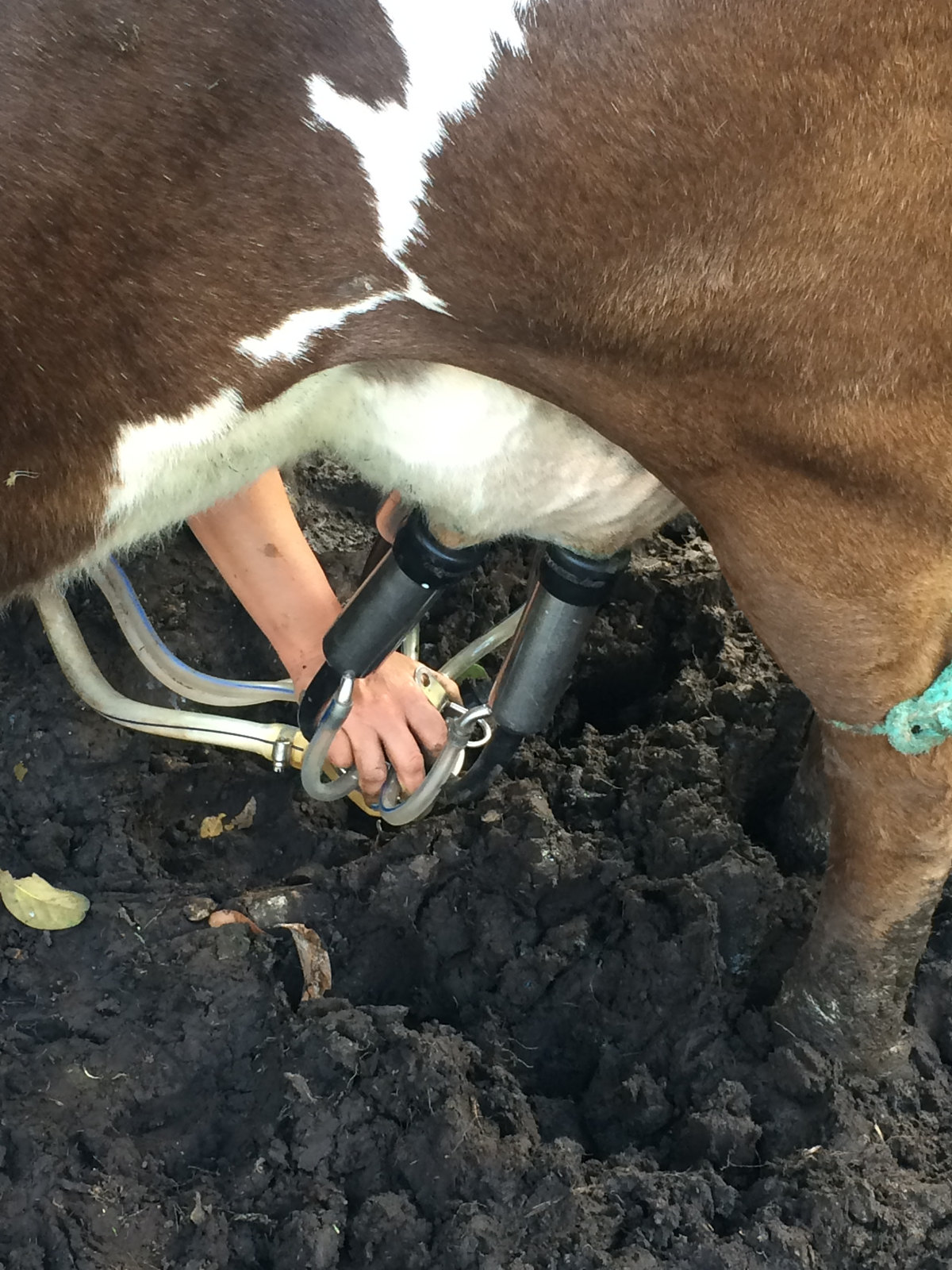 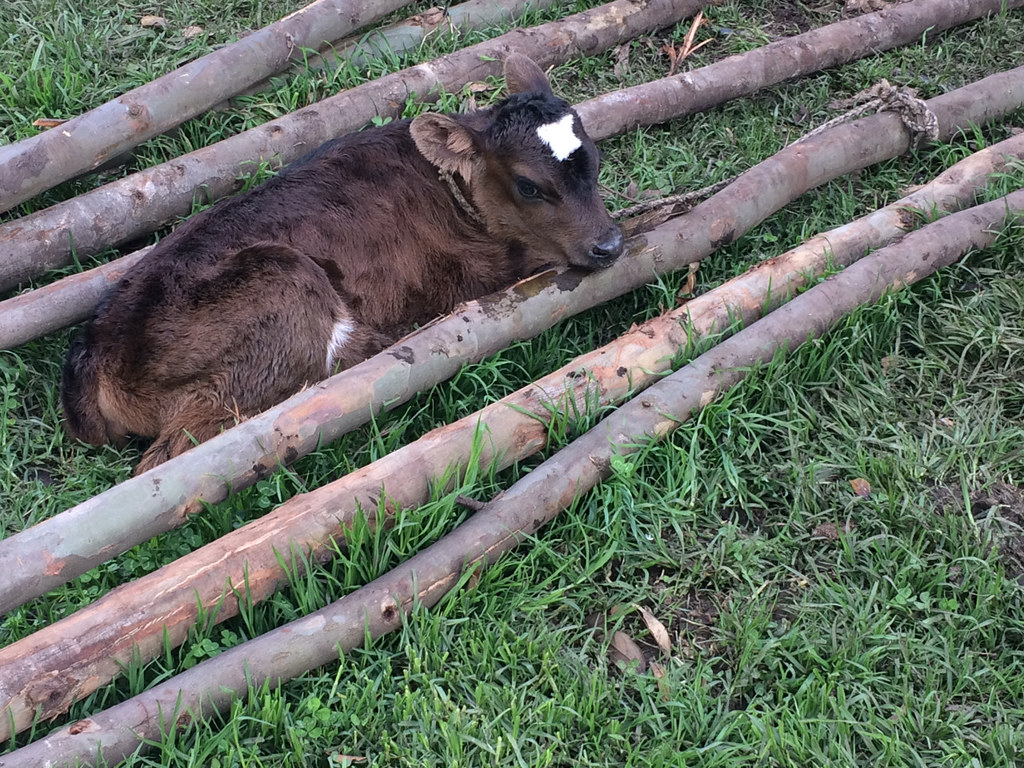 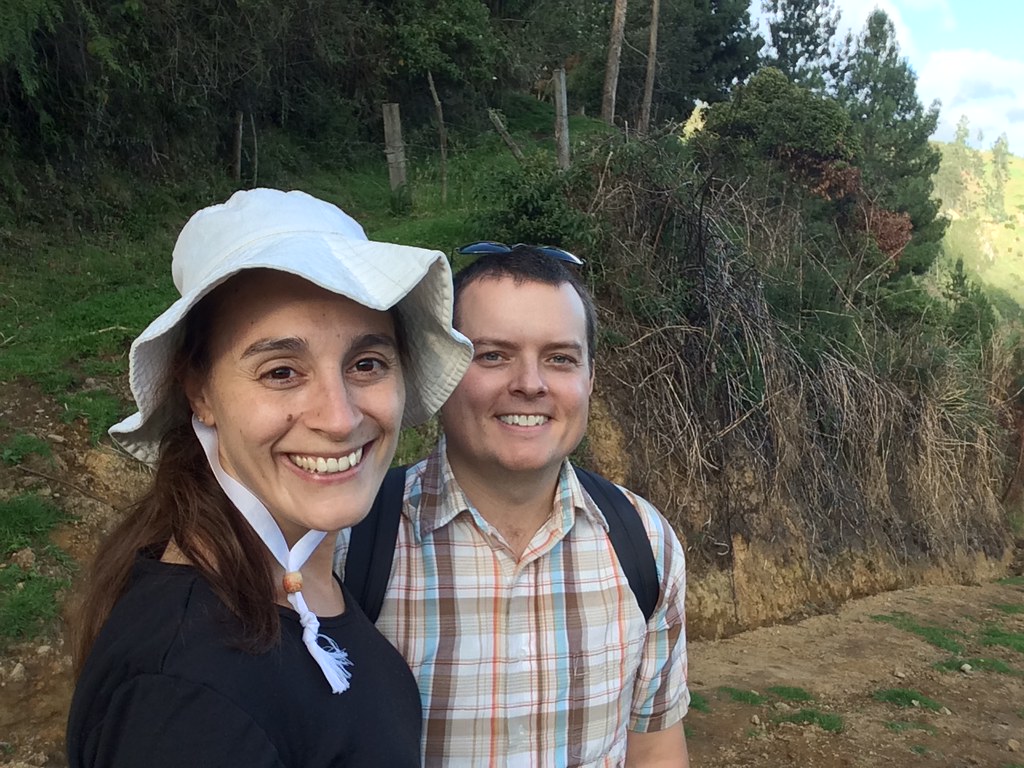 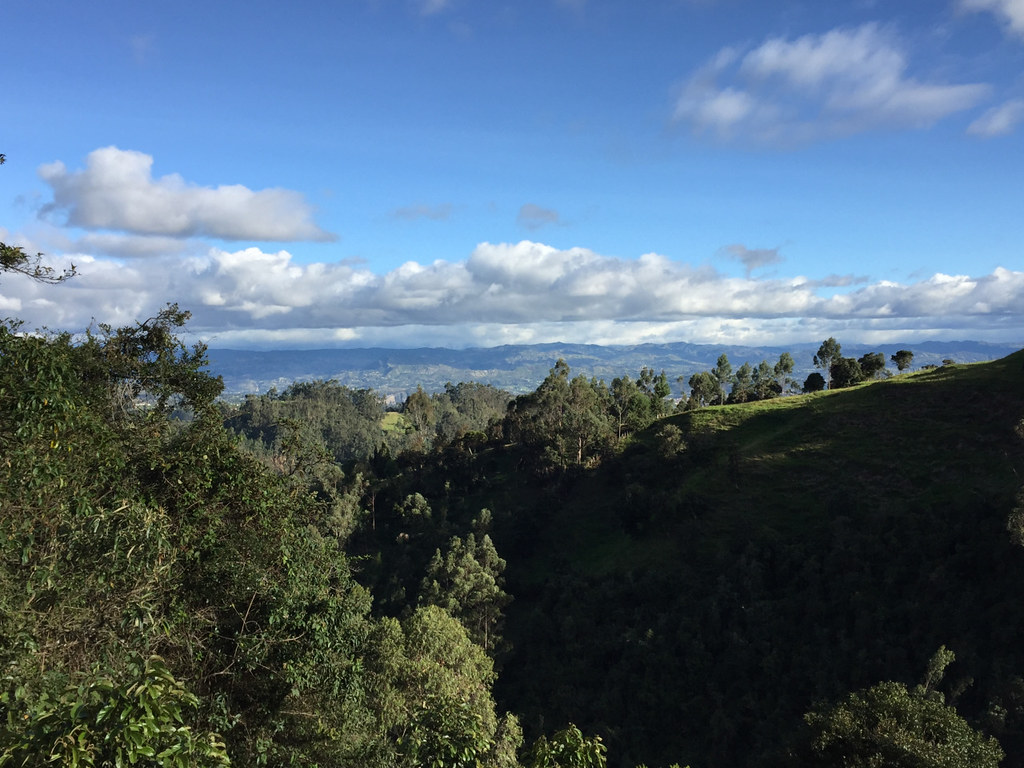 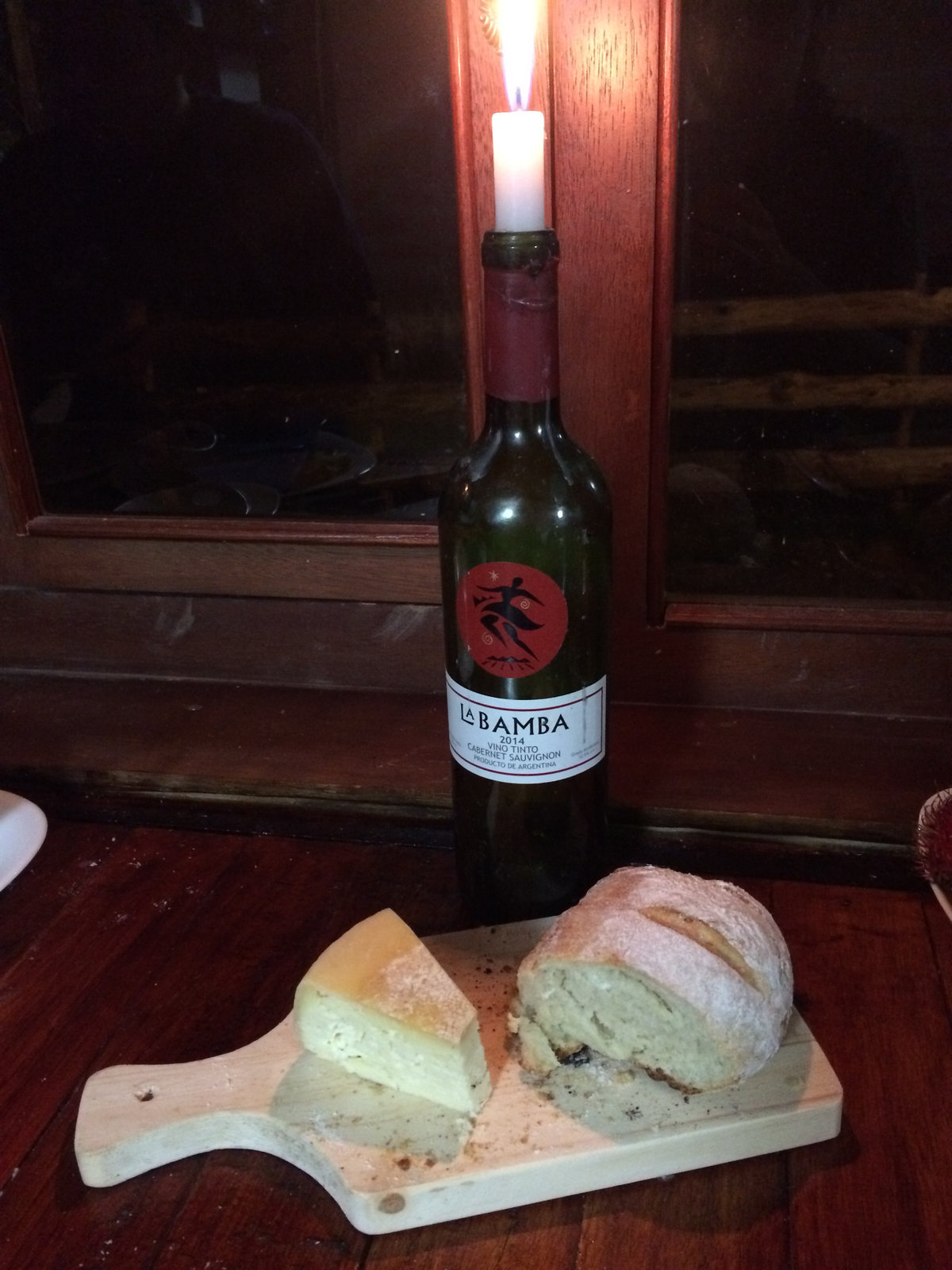 At the beginning of the week, we took a trip out to Hacienda Chan Chan, http://haciendachanchan.com. They are a dairy farm that recently started offering lodging for people who want a day, or maybe week, out in the country. It is located only about 45 minutes from where we are staying in Cuenca, Ecuador and can be accessed by one of the local busses and then a short taxi ride up a dirt road.

We arrived at Hacienda Chan Chan around 3pm and after about 15 minutes there, we were already feeling utterly relaxed! Luke, one of the owners, told us a little about the farm and showed us where we’d be staying. It was a really cute 2 story house with a kitchen, living room and wood burning stove on the bottom floor and 2 bedrooms on the top floor. The bathroom was located in a separate building  only a few steps away from the bedroom and was everything we needed. Definitely not an outhouse by any means.

Neil and I had brought a salad for lunch and they gave us some fresh baked bread with cheese melted in the middle. Can you say Heaven? We wrapped up lunch and it was time for them to go down to the pasture and milk the cows. We were so excited to go see this!

For as many cheeses as we’ve tried, we really haven’t learned much about the animals that produce the milk. Today was our chance! Neil suggested that I go help them round up the cows, but I had no idea what to do. I saw them making noises like “ooohhh” and “shesheshe” and walking around the cows to get them to line up. I did not make any of those sounds but at one point a cow walked up to me and kind of stared me down.

Luke told us that the cows they are working with know the routine and a few of them are always first to volunteer to be milked. They milk their herd twice daily and produce about 400L of milk. They sell their milk to an intermediary who produces milk under the label NutriLeche, https://www.youtube.com/watch?v=AYqFX3Ik9-0. I was curious how Luke and his family knew so much about cows and the dairy industry. He said they were formerly dairy farmers in North Dakota and after the economy switched to oil, they moved out of the US in search of a new place to be dairy farmers.

We watched while the farm hands put a solution on the cow’s udders to disinfect them and also stimulate milk flow. Then we found out something that should have been obvious but it wasn’t. All of these cows were females and recently had babies. We learned that cows produce milk for about 10 months after having a baby. In order to keep their milk production steady, their cows are artificially inseminated about  60 days after a calf is born. This lead us to wonder how old these cows were and how many babies do they have? Luke explained that each cow has about a 10 year useful lifetime. Also that many of these cows are about to have their second baby.

These cows were milked by machine and after about 3-5 minutes they were done. The same solution was rubbed on the udders again to stop the milk flow and prevent bacteria out in the field. His herd has a variety of types of cows but most of them are Holstein, the black and white cow that we all know. A baby had been born that morning whose father was a Jersey. Jersey cows have a higher butterfat in their milk than Holstein. There has been some crossbreeding of the herd so that Luke can experiment with better tasting milk or milks better for making cheese. We spent about an hour with the cows before heading back up to our place. We felt way more educated about cow’s and milk by the time we were done!

Our reward for all that learning was to go on a hike. Although it was far from a leisurely stroll, the path lead us straight up a hill covering a steep increase in altitude. At our highest point, we were at about 11,000 feet. Man that elevation sure can make you winded!

I suppose our real reward came when we arrived back at the cabin and hung out downstairs. Neil and I both found a book to read and we curled up in a chair to enjoy it. I found The Art of Natural Cheesemaking (http://www.theblacksheepschool.com/book-the-art-of-natural-cheesemaking/) so I was right at home. After about an hour of relaxation, dinner was served! Neil had black beans with rice, eggs, tomato, cheese and lime. I had a combination pizza with a homemade crust and fresh veggies. We each had a salad with fresh yogurt dressing and more homemade bread. Are you hungry yet? It was so good! And even nicer, was that we had the roaring fire going too to make it nice and toasty in the room.

But let’s not forget the homemade cheese. A wedge of white cheese was also served with our dinner. We didn’t know what specific type of cheese it was but of course we prepared some tasting notes for you. I found it to smell like salty funk and hay with a hint of tartness. The texture of the cheese was medium hard. The flavor was pretty dry with a dry, salty finish. Neil thought it smelled like the air at the farm, so fresh! He described the flavor as grassy milk. Not only were we completely relaxed but we we were eating homemade cheese and fresh baked bread. Delicious!

When we woke up in the morning, we kept hearing roosters, not unlike our place back in Cuenca! We got up just before our alarm and headed back downstairs where another wood stove fire and breakfast were waiting for us. It seemed like we ate for an hour before deciding we couldn’t eat anymore. Such a great way to spend the morning! After some relaxing, it was time to wrap up our time at Hacienda ChanChan.

We had an amazing time and would definitely go back when we have the chance! Our hosts even drove us back to Cuenca. Thanks so much to Luke and Julie for a great “Escape from the City”!