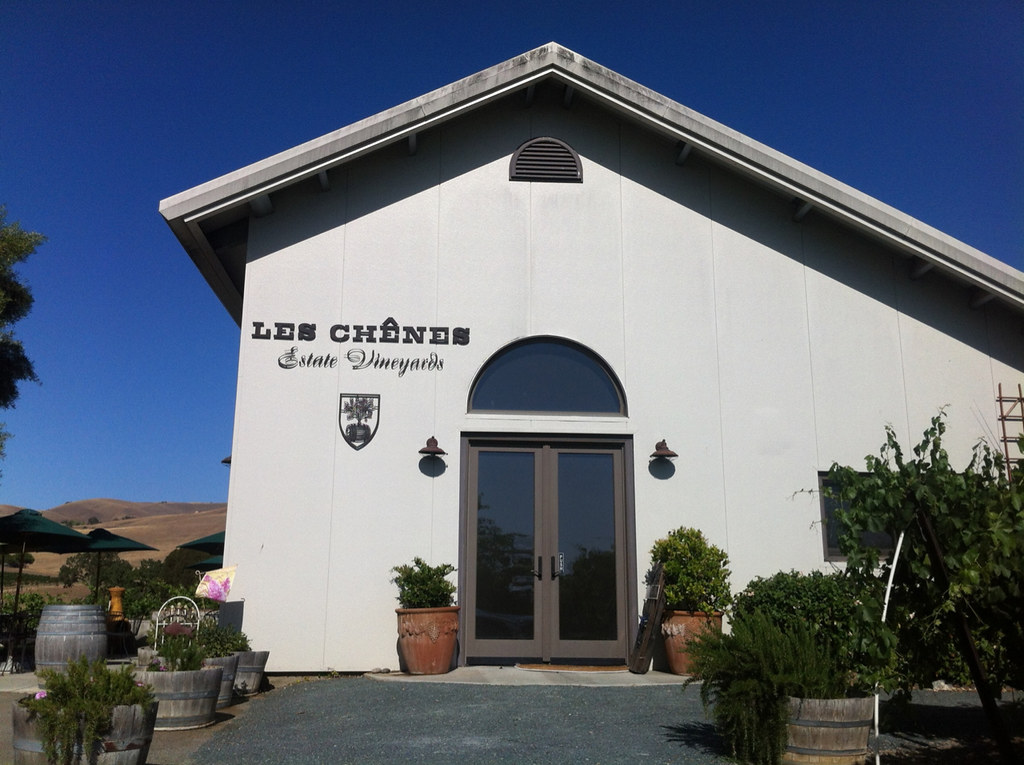 Our next stop was about 15 minutes down the road at Les Chenes Estate Vineyards. We had a really nice time here, the last time we visited Livermore and remembered the food and wine pairings. (http://mferraro73.tumblr.com/post/48889975506/on-location-in-livermore-ca-sunday-4-21-we)
We also thought their focus on Rhone varietals would be nice for KerryAnn to experience since the wines are so aromatic.

The tastings are so personal at this winery, because the winemaker, Richard, leads you through the wines and his wife, Candice, creates the food and wine pairings which definitely add to the experience! Not to mention the fact that your tastings are in their converted garage, right next door to their home. As you all know, Neil and I love our Wine And Cheese, so let the tasting begin!

The 2012 Deux Blancs was a cuvee of Chardonnay and Viognier and I could definitely smell both grapes individually. Both Neil and I picked up more peach flavors in the wine after we paired the wine with the cheese. KerryAnn described the flavor of the cheese as strawberry cheesecake, delicious!

The next wine, 2011 Estate Mourvedre Reserve, was my favorite. Richard and Candice told us they released this wine during the holidays in order to pair with all those seasonal flavors. I’m still learning the typical flavors of this varietal but most of the wines I’ve tried that include Mourvedre have a pretty smoky or tobacco flavor to them. This one is described that way in the tasting notes but I noticed spice and cherry aromas, a distinct cinnamon flavor, similar to a Fireball hard candy, anise and a light texture. Neil said it “smelled amazing”, found some similar flavors and aromas but added the flavors of “dust” and currant. We agreed that the spice was magnified by a thousand, during the cheese pairing.

I think we were all floating on a spice high from the Mourvedre, so when we tasted the Deux Rouges, it was a bit hard to focus. The wine is a blend of Cabernet and Syrah, which was on the lighter side, and had a noticeable spice also. We did notice that the cheese took the spice out of the wine.

The 2012 Primitivo was filled with aromas of spice, prune, and raisins. The texture was pretty complex as well; soft, rich, coated your mouth, and some tannins. Neil found cassis and black pepper flavors. When we paired the wine with the cheese the prune flavor increased. I usually like Zinfandel and Primitivo wines but this one had too much prune for me and I think it might have been too complex for me.

The final wine was an Old Vine Dessert Wine, prepared to be similar to a tawny port, using a blend of Tinta Madiera, Touriga, Souzao, and Tinta Cao grapes. We noticed flavors of raisins, prunes, and alcohol, with a thicker texture, and a nutty finish which really threw us for a loop. Neil identified Pecan or Hazelnuts and I found almonds. When the wine was paired with the cracker, the wine sweetened and there was more fruit.

After our tasting, we spoke with Richard for a few minutes about his prospective on native yeasts vs. commercial yeasts. He was saying that his production level causes him to lean towards commercial yeasts for fermentation. When you only have a small amount of grapes, it is hard to predict what the native yeasts will do and you might not get your maximum amount of wine. He also mentioned that the commercial yeasts help bring out different flavors and aromas. I had learned a lot of this from working at the vineyard in Florida but it was nice to confirm what I’d heard before.

We really enjoyed the food and wine pairing and relaxed experience here. We took a few photos in the vineyard and drove back into the city watching the rapid decline of temperature with each mile closer. Another fun day of wine tasting!