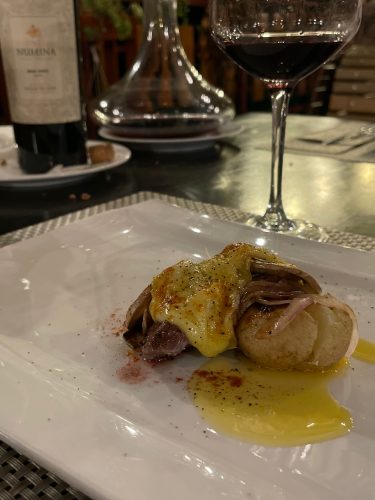 Ever tried Raclette before? We knew it was a cheese dish that originated in Switzerland but had never come across it on a menu until arriving in Costa Rica this year. It always surprises us the things that we find there!

The restaurant, Chirripoberg, had amazing views and was pretty close to where we were staying so we had been there a couple times already. Each time we visited, we looked at the raclette on the back page of the menu and thought “We’ll have time to try this one of these days!” 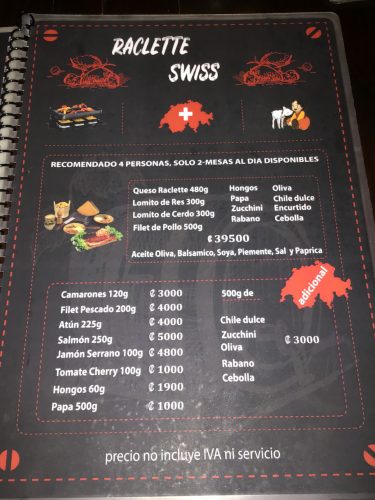 It was time, we were celebrating 10 years married and were ready to eat all those saved up calories. Since this is a special meal with a lot of preparation, reservations are required. 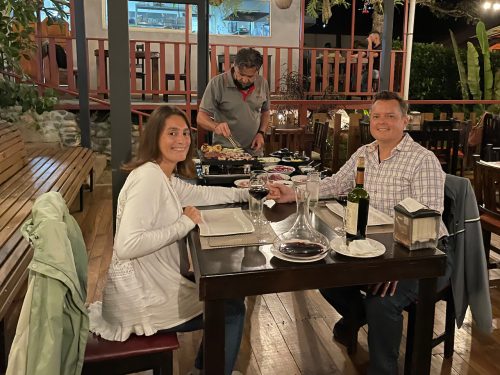 When we were seated, we noticed a grill that reminded us of a hibachi on our table. All that we really knew about the dish, was that it came with a bunch of ingredients and the cheese would be hot. I had recently googled Raclette and found a few different Raclette cheese melters that looked like irons as well as one that was a big tray filled with cheese. I didn’t remember seeing anything like this grill though. 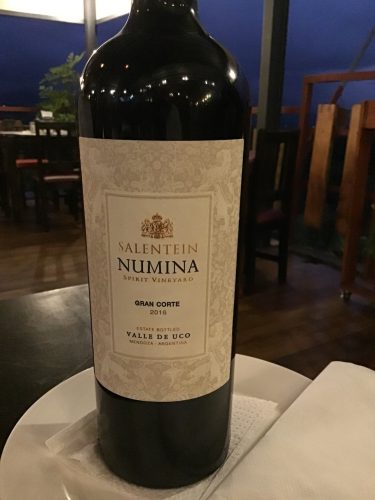 We ordered a nice bottle of red from Argentina to go with the beef, pork and salmon, we’d be having. Then another person arrived at our table and he said he was here to cook for us. His name is Ari and he’s the owner of the restaurant. Since he’s from Switzerland himself, he was pretty familiar with Raclette. 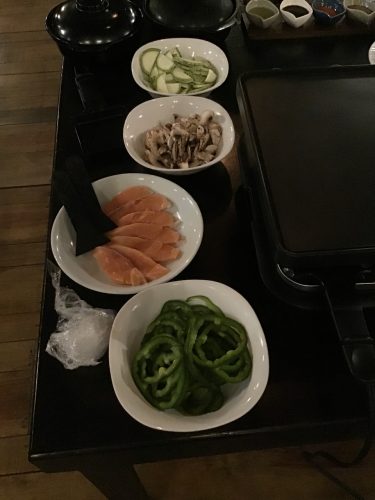 He brought over the 11 plates of food that he’d be cooking and started to tell us about Raclette. It is both the name of the cheese used, as well as the event of cooking on a grill with friends around. People in Switzerland have Raclette parties and although the ingredients can vary, there’s typically meats and veggies to grill, boiled potatoes, and a lot of melty cheese. If you look closely at the grill, you can see the special trays on the bottom meant for melting the cheese! 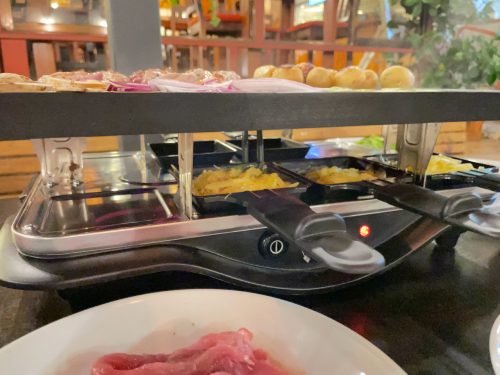 Now that we had our introduction, our mouths were watering to try it all out! Ari put a portion of each ingredient on the grill and filled two of the trays on the bottom with the cheese! 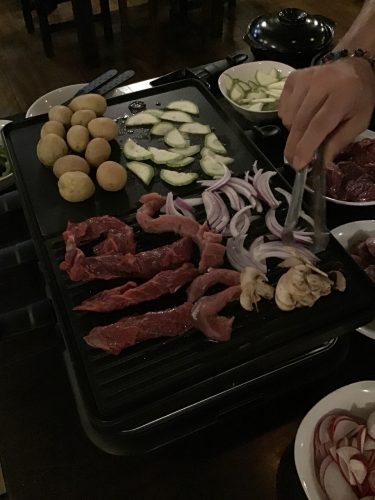 Our first plate had potatoes as the base, beef strips, mushrooms, zucchini, that delicious cheese and some olives and radishes as a garnish. Even if we could have captured the cheese on video, I don’t think it would have done it justice. It oozed off the tray in perfect slow motion to form a blanket over all the grilled foods. Once I tasted it, I couldn’t stop smiling, I was in heaven! 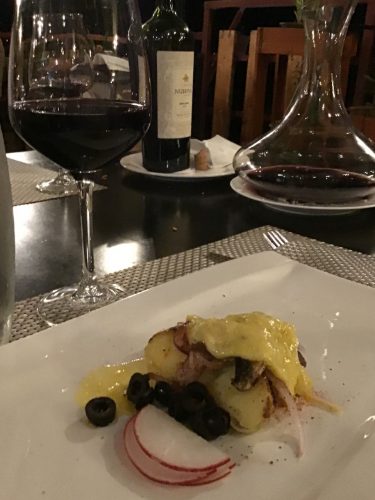 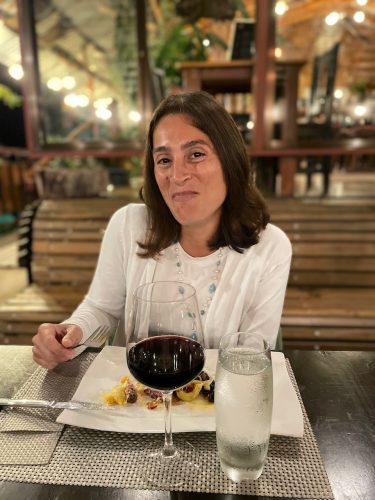 The cheese he used was a genuine Raclette mix purchased a few hours away from the restaurant. He did tell us that the first blend of cheese they sourced wasn’t up to par but they were much happier with this one. And boy was it good! It was aged three months, and you could taste and smell the delicious funk! Neil even picked up the flavor of truffles. 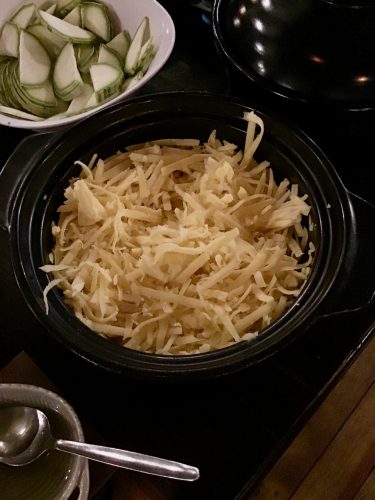 Now it was time for the next plate, this time with salmon, potatoes, mushrooms, zucchini, and a wonderful blanket of cheese! You can imagine that this was going to be a big night of eating! Then we tried the pork with all of the fixings. And repeat, beef, a second type of beef, more salmon and more pork! 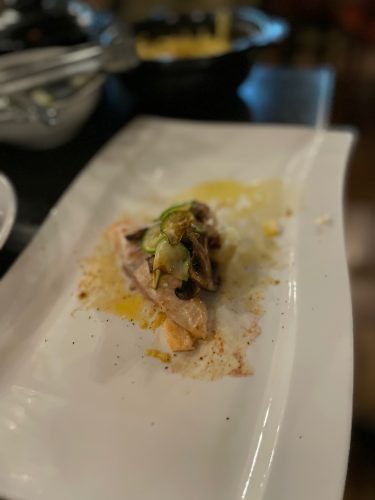 We chatted with Ari about life as an expat in Costa Rica, beer, wine, cheese and all things good. He said usually Raclette is a group event where everyone takes a turn cooking but he didn’t seem to mind, so he kept cooking for us. After all we were celebrating! Neil did take a turn after carefully watching the process and made me a plate. He even mastered that slow motion ooze of the cheese to make the blanket. Way to go Neil! 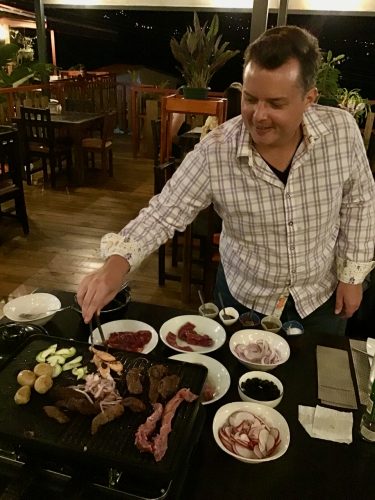 We went through all the cheese that had been originally provided so they brought more! I think we ate like 6 or 7 plates each before deciding we should slow down. There was still a ton of raw meat waiting to be cooked. I decided to start grilling it up. I figured I’d warm up some of the potatoes with the spices too for a nice little leftover packet for breakfast. 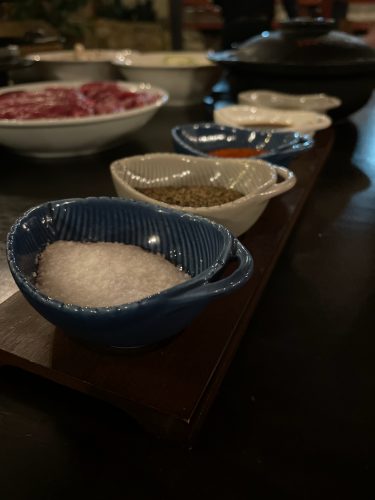 If I had to choose, I’d say my favorite pairing was the beef with the cheese. The salmon didn’t really seem to hold up to the funk but I still happily enjoyed it all together!

And wait, there was wine too! I have to admit that the wine kind of took a back seat for me during this meal because I just couldn’t get over all the wonderful food flavors we were tasting! Don’t worry though, we still wrote a few notes. The wine, mainly Malbec grapes, was dry but not too dry. I’d guess it helped that we decanted it. There was a nice blend of flavors including boysenberry and raspberry and of course, we finished the whole bottle without any trouble.

Ari could see that we were filling up so he ducked off to the side and then came back with some samples of his beer for us to try. Chirripoberg is a brewery too and they’re getting ready to compete in the upcoming Costa Rica beer event. Although neither Neil or I are beer people, we did try a few sips. Neil said it reminded him of a sour beer he had once tried and enjoyed his sample. I tasted it too but wouldn’t say I found any defining flavors.

What a delicious night! Thanks so much to Ari and his team for such a great experience. And now we can say that we know what raclette is and we’ll be having it again. We might wait until our next anniversary though because we are still so full from all that indulging! 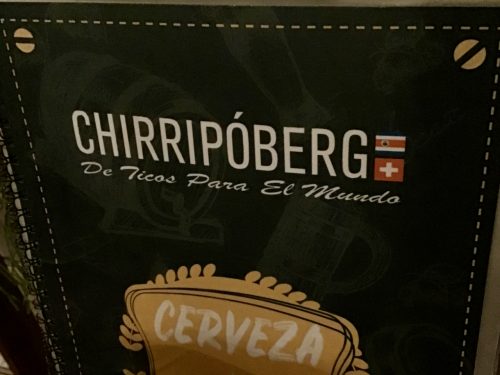