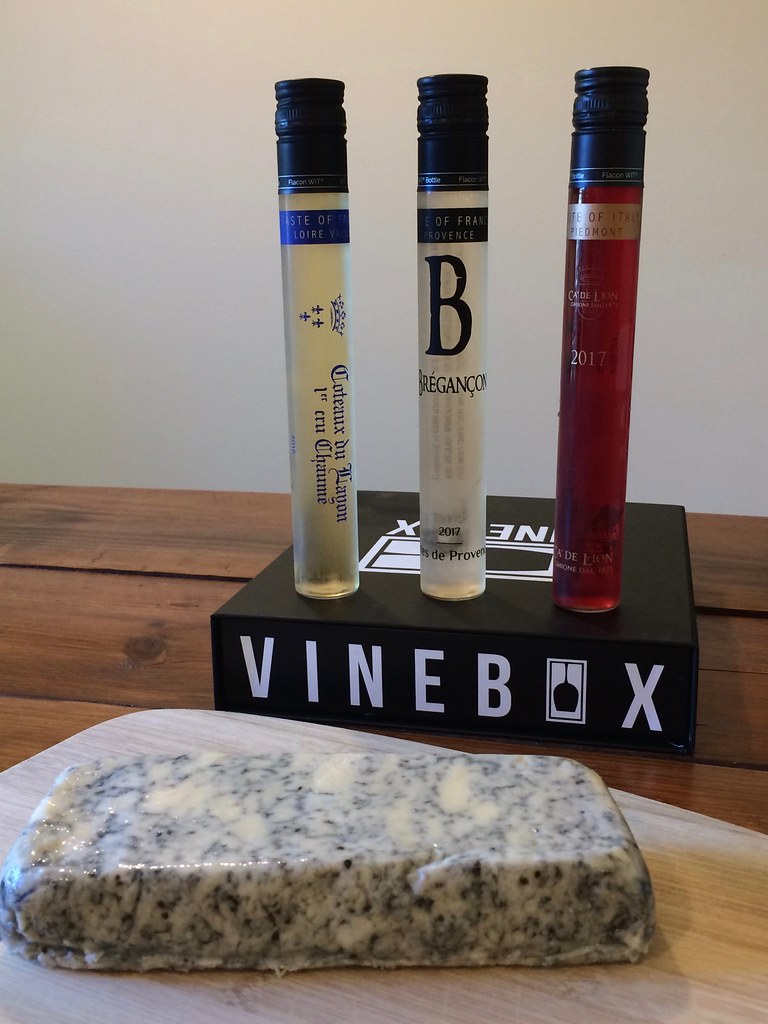 Our second Vinebox shipment included a White, Rosé and a Red; what a great mix! Oh, you’ve never heard of Vinebox? Why not read our introduction explaining Vinebox in the entry from our first shipment. (https://wineandcheesefriday.com/vinebox-shipment-one/) Now to figure out which cheese to pick? We had our eye on a North Carolina blue cheese that looked like marble, lets try that. It will be interesting to see how this blue pairs with all the colors of wine! 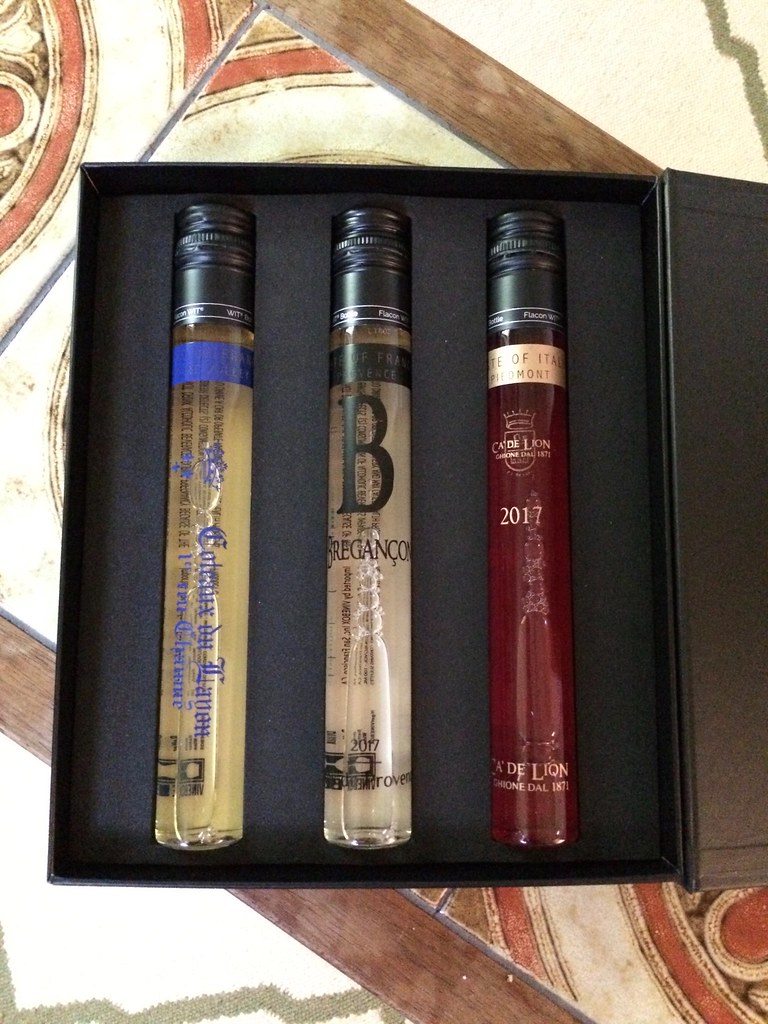 The first wine by Domaine de la Roche Moreau was a white wine from Loire Valley. This wine had a bunch of details included with it, not only is it from Loire but the specific part of the region is Coteaux du Layon and it is classified as 1er cru Chaume. Since we aren’t all that familiar with wines from the Loire Valley, we began swirling to see what aromas we could identify. Neil started by noting its caramel color and wine legs. There are cards with each wine describing the tasting notes but we love to figure out our own notes before consulting them. This one was a bit of an issue because it had sweet caramel aromas leaping from the glass. And then a taste confirmed, “This is a sweet one.” Oops, guess we messed up our palates a little.

Oh well, we can still continue taking our notes since we know it’s sweet now. Maria picked up apple, pear, floral, pineapple and honey aromas. Neil agreed with the apple and pear but he thought it was caramel too. When we tasted it, we knew it was a thick, sweet wine. Neil called it candy sweet like a jolly rancher or lollipop and maybe some apple. I thought it tasted like caramel and it wasn’t at all what I expected. Knowing that it was a white wine and it was in the first position of the Vinebox, we had guessed it would have been a dry white. The “cards” called it a “wildflower honey-scented snow cone” so it was no secret once we took a peek at those.

This cheese was made by Ashe County cheese and is called Carolina Bleu Marble, ashecountycheese.com. What a cool idea, a blue cheese that was marbled. Never saw anything like that before! As I looked more at the cheese I noticed there were tiny specks of spices in it and it was kind of slippery. I think it needed to breath a bit once we took it out of the shrink-wrap. Neil could smell it throughout the house so we knew it had a strong blue aroma! There was definitely a pungent funk emanating from it as well as milky, herbal and blueberry aromas. Neil found it to have a strange subtle sweetness in addition to the milky, blue flavor. I thought it was tart, tangy, dry and creamy with an acidic finish. This cheese coated my tongue too which is usually a set up for how it will pair with the wine.

And speaking of that, let’s see how it works with the Domaine de la Roche Moreau Chenin Blanc? We guessed they would go well together since they were sweet and funky. Neil noticed the wine to tone down the strong funk of the cheese but somehow the wine became even sweeter. He didn’t think it was a good pairing. I smelled sweet pineapple aromas in the wine but it was drier going down my throat and it heated up my tongue. I don’t think there was much of a change with the cheese. I’m not sure about this pairing and we ran out of wine so I guess my time was up to make a decision. At least there are two more wines to try.

The second wine was a Chateau de Brégançon, Rosé de Provence but you really needed to look hard to see the pinkish tint. This is one of the characteristics of rosés of this region but aside from that, I need to taste more wines to know more about this huge rosé producing area. And that we will! I liked how aromatic this wine was, some sweetness, berry, and bubble gum. Neil thought the scent was a little strange when he noticed it smelled crisp and like cotton candy, but then he picked up the lavendar floral aromas. Way to go Neil, those flowers are a symbol for the Provence area! Once I took a sip of wine, it was light and tart with a flavorful finish and acidic too. The second sip was different than the first but then it was full of flavor again. I’d be curious to try this iconic type of rosé again! Neil picked up flavors of strawberry and bubble gum but called it tart and light. He found it to be an interesting wine and made note that it was his favorite wine of the tasting.

After we learned about this Provence rosé, there was still the task of pairing it with the Carolina Bleu Marble cheese. Neil found the wine to become a delicate, light, strawberry flavor, while the cheese gained flavors of orange spice with funk and milk. As I swirled the wine to see how it may have changed, I noticed the aroma of a balloon, and a flavor that bounced between tart and flavorful. The cheese seemed to be more tart and tangy. Neil’s notes sound better than mine, how is it that we can pick up such different things?

The first thing we both noticed about the Ca’ De Lion from Piedmont, Italy was the color! How many wines have you come across that were blood red? Neil and I picked up all kinds of aromas with this one including berries, a slight hint of tar/graphite, red licorice, cherries, and hot cinnamon. The flavors were similar to the aromas and it certainly had a lot going on! We found the wine to be tart and crisp with flavors of graphite and cherries. I took another sip a few minutes later and the wine tasted dry. The wine cards called this a red wine-rosé hybrid. I need to find out what that means! After searching a few articles, I guess they were referring strictly to the color of the wine, the skin of the Grignolino grape doesn’t contain a ton of pigment, so the wine is light in both color and body.

Let’s see how it pairs with the cheese! The wine had a similar flavor but the cherries went away and it seemed drier. Neil had the opposite thing happen, he found the cherry flavor to get bigger. I noticed the cheese to get creamier but Neil thought the milk flavor in the cheese went away and it became more like a funky blue cheese! 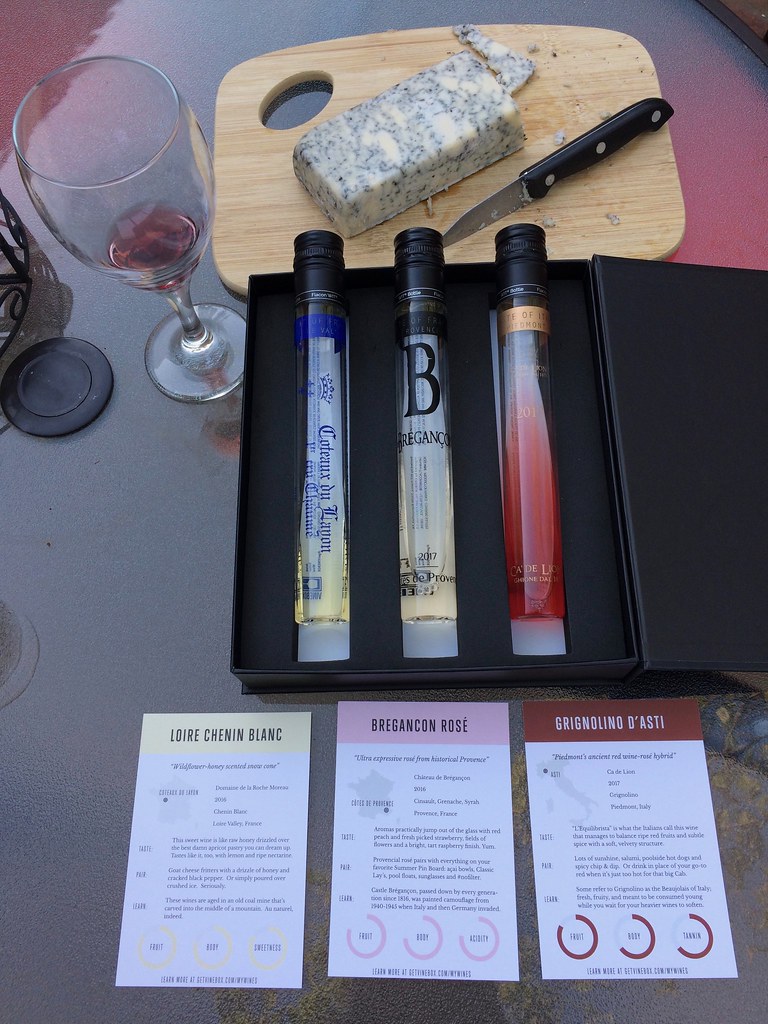 After trying all these wines, I’d like a little more time/exposure to the rosé and the red. There was so much happening with both of them and I need more wine to study than just the sample in the Vinebox. These are definitely wines that I’ll keep my eye out for when we’re wine shopping in the next couple months.

Regarding the cheese, THIS IS A BIG CHEESE! I think it’s even too big to pair with wine. Neil and I certainly found such different things during the pairings too. I did think it would be nice in a salad with strawberries and walnuts, so we made one a few days after our pairing. We were right, what a delicious salad. We had so much cheese leftover that we actually made it two days in a row!

Do you think you’d like to try a Vinebox subscription? Click this link to see how the wine club works. We have it for 3 months so there’s still one left for us to review, and pair with cheese. Stay Tuned! 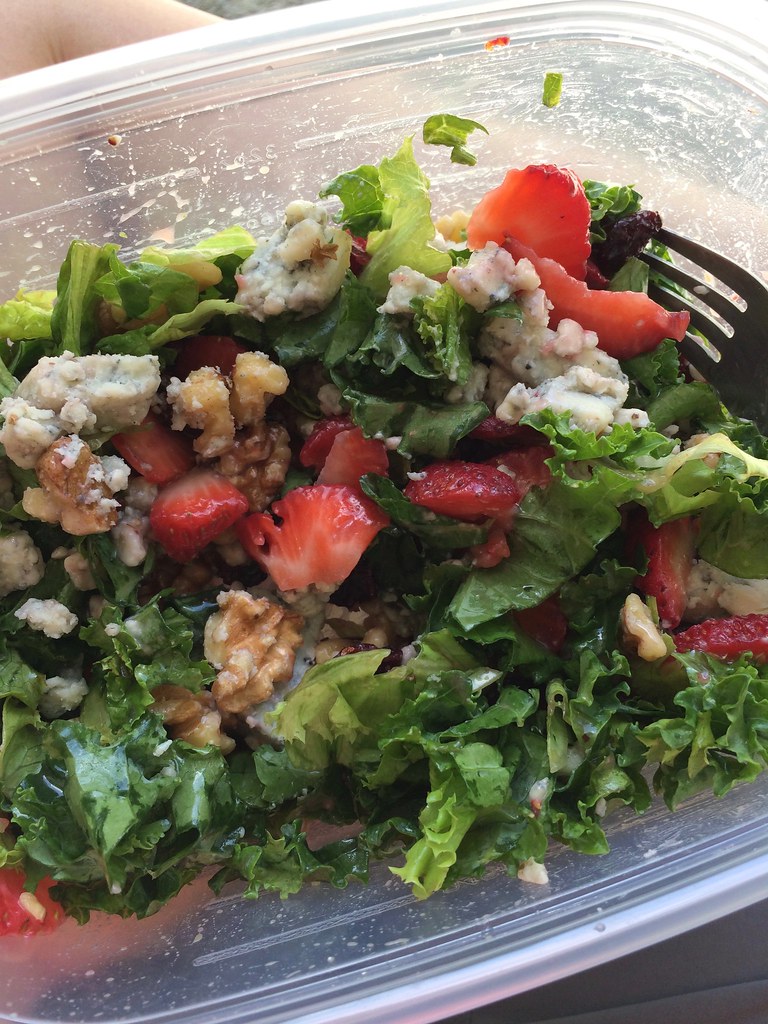