We found a fellow WineAndCheese lover here in Quebradas, Costa Rica! Her name is Carol and she lives right down the road from us. Since she’s an expat, we can speak English, which makes it a little easier! We had already gotten together for wine and cheese before so I wanted to do it again as part of WineAndCheeseFriday. Also having some in-person time provided a nice break from all our Christmas video chatting.

When choosing our wines, I wanted a white blend, since we rarely have those here. The one that we found was from Spain and had a cute owl on the front. In addition to the white, we rediscovered a sparkling rosé that we had tried in the past but never paired with cheese. Always nice to see how two different wines pair with the same cheese, especially when they are so different from each other!

The cheeses were from our “sleigh full of Monte Azul cheeses!” (https://www.quesosmonteazul.com) When we placed our order with them, my gears were already turning for this pairing. Both of these cheeses are goats milk “logs” that were slightly aged but I could tell they’d each have their own flavors and textures.

As we began, I told Carol this was more of an official pairing, so we’d be writing down notes for me to share with all of you! Since she hadn’t really done much wine tasting in the past, I let her know that she could swirl her wine in order to release the aromas. Also whatever flavors came to mind, be sure to write them down, because you never know what you’ll identify when wine tasting.

The first wine in our tasting is the Pinord blend of Xarel.lo, Macabeo, Parellada, and Muscat from Spain. I have heard of these grapes but I can’t say I have much experience with them. Carol said that she doesn’t drink many white wines but admittedly it is hard to enjoy them here in a tropical setting. They warm up in the glass a little too quickly. In order to enhance our experience, I poured us all a small sample and then put the bottle back in the fridge.

Carol really enjoyed it and she made note that it seemed gentler at the front of her mouth and stronger at the back. See Carol, you totally know what to do! We’ll make a wine taster out of you yet! She also felt it was smooth and had a sweeter flavor. Neil was able to identify apple and slight caramel aromas with crisp, round flavors. I picked up mineral aromas that were crisp as well as a light lemon. The flavor was both light and smooth with a feeling of high acid on my teeth. Seems we all agreed on the texture being smooth and the flavors being enjoyable.

My notes sparked a discussion with Carol, “What is mineral?” I told her it’s like the smell/taste near the river here, which is very characteristic of Spanish wines. It actually prevented me from enjoying them in the beginning but now I can appreciate them more. And as another point of wine education, we told Carol to make note of the label and how it also says Nox. This is the name of the wine but Pinord is the producer. (In Spanish, Nox, means night). In order to find out which grapes are used, you need to look at the back label. These label characteristics are representative of European wines.

Then we went off on a little tangent about how there was an owl living in the Times Square Christmas tree that they named Rockefeller. This owl on the label reminded us of him. Oh the silly things that come up with wine tasting! 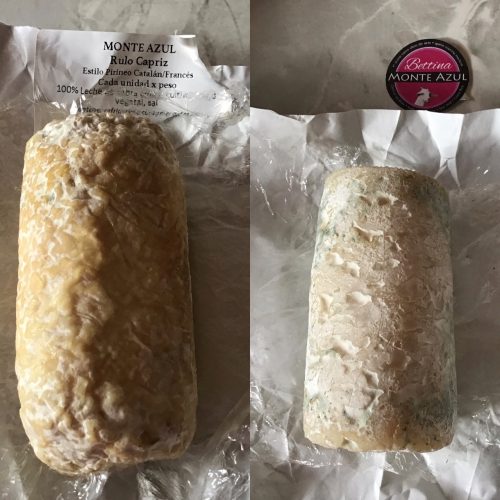 We moved onto the cheeses next. Once they were opened up, we could see that the Bettina was definitely more aged than the other because it was a harder cheese. The Rulo Capriz had a wrinkly rind and a softer paste (the inside part without the rind). Carol gravitated toward the Bettina while Neil and I both chose the Rulo Capriz to taste first. 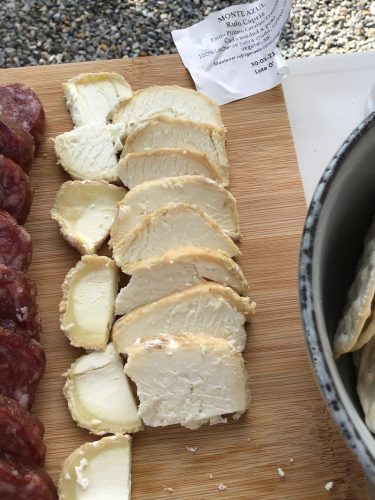 We’ll start by describing the Rulo Capriz. Carol found it to be tangy and goaty with a chewy, fudgy texture. Neil smelled the funk of the farm and the cheese aging cave. He felt the texture was soft, crumbly and creamy. The rind was slightly sweet and overall the cheese was yummy. I agree that I really liked it! The funky aromas tingled my nose but that is always a good sign to me! It even smelled a little buttery. When looking at the slices, you could see the different levels of ripeness by the way the color changed from the edge to the center. The texture was thick like fudge and there was a salty finish. The rind was wrinkly which happens when you add a specific type of bacteria in the cheese making process. It also had a distinct flavor that reminded me of mustard. 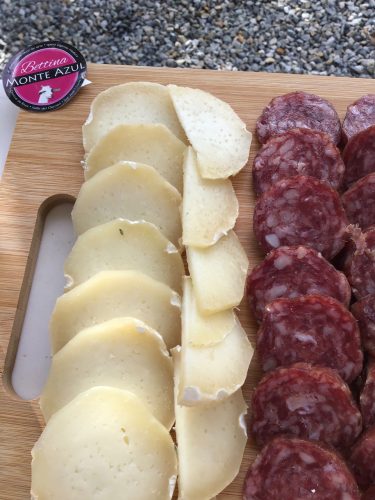 As we took notes on the Bettina, Carol called it Rico! (In Costa Rica when you like something you say “Que Rico!”) She described it as a mild cheese with a chewy texture that seemed like a Swiss cheese. Neil thought the texture was waxy and squeaky but that didn’t stop him from enjoying this flavorful cheese that was tangy with a slight salt flavor. I noticed milk and butter aromas with some salt. This aged cheese was the same color throughout with a hard texture. The flavors were salty, milky and a little funky. The rind on this cheese is harder than the paste and tastes earthy. I also made note that the cheese coated my tongue, which is usually a good sign for pairing it with wines.

Let’s talk about that Trapiche Sparkling Rosé before we start all the pairings! Neil and Carol both made note of the beautiful sunset color. She thought it was smokey, with grapefruit flavors and described it as “yummy!” Looks like we chose wines that worked well for her palate. She was also happy that we tried the rosé last because all of the flavors built up nicely. Neil agreed with the flavor of grapefruit being slightly tart and thought it was similar to a Tequila Sunrise cocktail. He said it was both good and elegant! Unfortunately after their glowing reviews, I noticed smoky, bacon aromas, which seemed familiar from before but they were much more pronounced this time. The flavor was citrus but very light and I decided it wasn’t the wine for me.*

Now we’ll pair the wines and cheeses! Once I read through everyone’s notes, I found out that I’m the only one that paired both wines with both cheeses but we know I’m always the overachiever of the bunch!

The Rulo Capriz was the cheese that had the wrinkly rind, we’ll begin there. Neil started by pairing the white blend with this cheese and noticed changes in both the wine and the cheese. The cheese was more buttery with a slight smoke afterwards. The wine is less fruity with a hint of pepper and minerals. When I paired the white wine with Rulo Capriz, I thought the wine changed to be more mild and the rind on the cheese lost it’s flavor. Seems like they both decreased in flavor. Then I paired the Rulo Capriz with the rosé and the opposite happened, the cheese got more funky.

It seems the white wine changed the same way for both cheeses. It also caused both cheeses to become more mild. The rosé enhanced both of the cheeses though, so I’d say they were a more interesting pairings for me.

Before we wrapped up for the afternoon, I asked “If you had to choose, which was your favorite wine? And your favorite cheese?” We had a vote for the white, the sparkling and both, so it’s good that we brought both to the party. Carol was happy we had chosen to have a sparkling rosé because it was something out of the ordinary for her.

Regarding the cheeses, the Bettina was more palate pleasing to Carol. Neil and I both really liked the Rulo Capriz because it was so different than what we usually have access to here. Also it had some similarities to Delice de Bourgogne, one of our favorite cheeses!

What a terrific afternoon of wine and cheese! Both the wines and cheeses were crowd pleasers and we’ll definitely be doing this again with Carol. And thanks to her for trying something new and putting up with our “rules”! 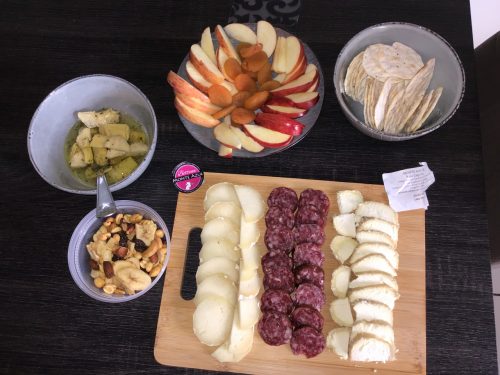 *Strangely though, the wine was much different when I tried it again a couple days later. There were strawberry aromas with grapefruit flavors. That’s definitely a flavor profile I can get on board with! It seems the wine was influenced by the sausage we were tasting alongside the wine that day.