Wine and Cheese at Geoff’s 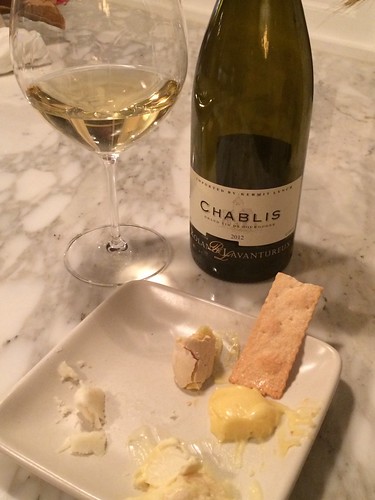 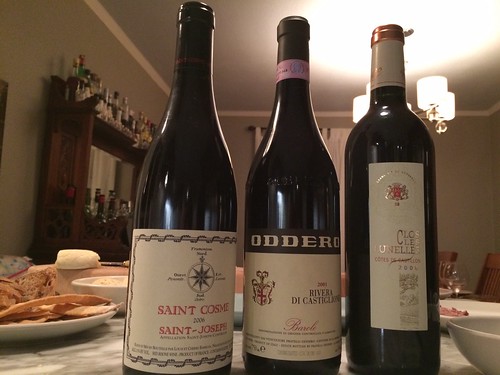 We went to visit our friend Geoff for dinner over the weekend. He knows how much we enjoy our Wine And Cheese so he created quite a spread of cheeses as an appetizer. He is also in the wine industry and has a pretty nice collection. With all the Wine and Cheese we were going to try that evening, we figured it is only fair to share a few notes.

There were four cheeses offered with 2012 Domaine Roland Lavantureux Chablis, imported by Kermit lynch. The cheeses were purchased at Rainbow Grocery, http://www.rainbow.coop, one of our favorite places for cheese! The double cream Cremont was soft, creamy and salty with a mild funk. It did make our mouths water but had a pleasant flavor. Our second cheese, Spanish Grazalema Payoyo was the hardest and driest of the group but still a bit spongy and tart in flavor. Moving back to the soft cheeses, we tasted Dancing Fern. It had more funk, was not quite as soft but still creamy and it had a mild chlorine flavor. I feel I’ve identified this flavor in soft cheeses before but it seems like a description you wouldn’t expect. The final cheese Ameribella, reminded me of one we’ve used for Wine And Cheese a while back with a smoky funky flavor. We didn’t do specific wine and cheese pairings but the cheeses brought out the fruit and minerality in the wine.

When it came time to choose the wine for dinner, I was shown the indexed wine list and allowed to choose a few. Geoff had his collection very organized with box numbers, by region, and the range when the wine should be at it’s peak flavor. Wow, what a task to choose! I really just wanted to study the list and take it all in. We were going to be eating grilled pork so I had some ideas. I was looking for something that would be on the lighter side but a good amount of flavor. We decided to try a 2001 Oddero Barolo Rivera di Castiglione from Piedmont, Italy, a 2006 Chateau de Saint Cosme Saint-Joseph from the Rhone region of France and a 2000 Chateau Clos Les Lunelles, Cotes de Castillon from the right bank of Bordeaux, France.

The rhone wine had a rustic flavor and went very nicely with the pork. The Bordeaux had black licorice flavors and was also a nice complement to the food. Unfortunately, the Barolo seemed like it might have an issue when we had some difficulty uncorking it. The flavor wasn’t “corked” but definitely not right. We did have fun coming up with some ideas of the flavors though, Halloween mask with a hint of cherry, cherry poncho, and new Sears garden hose. Nevertheless we had a great time feasting and drinking wines all night. Always a good time at Geoffs!