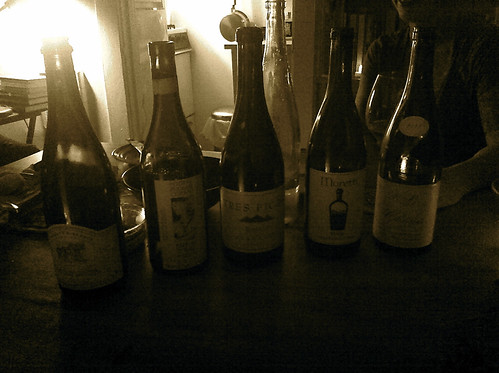 During the week, we joined some friends for dinner and wine pairing. Our task was for each person to choose a bottle of wine that would pair with their food. Since all of us are in the wine business we knew there would be some nice wines at the table, as well as some good pairings!

Our host, prepared a Lebanese dish called Mujadara and paired it with a Syrah. We brought Ewephoria cheese, a sheep’s milk gouda, and a bottle of Barbera d’alba. We had this cheese during “PinotVember” and had to try it again! (http://mferraro73.tumblr.com/post/67528311342/pinot-vember-11-17-pinot-noir-and-aged-sheep). Another guest brought Tres Picos Garnacha and some mediterranean salads, very tasty! The final guest brought HL Chenas Cru du Beaujolais, some sheep’s milk brie and some feta stuffed olives. What a fun night! We’ve had these informal wine dinner parties a few times now and it’s a great way to do some wine and food pairings while hanging out with friends.

As you can imagine, this would be a lot to discuss for wine pairings so we will limit it to the tasting notes for the wines as well as the two wine and cheese pairings. It was a pretty casual night of food and friends so the wine descriptions aren’t as meticulous as usual.

The first wine we tried was the one we brought with us, 2010 Podere Ruggeri Corsini, Barbera d’Alba (http://www.enotecavinonostro.com/2010-Podere-Ruggeri-Corsini-Barbera-D-Alba-p/pod-bar10.htm). I found it to have light aromas with a smooth vanilla flavor and a lingering finish. Pretty nice! Neil agreed that it was smooth but found it to be extra light.

We knew we would definitely bring the Ewephoria cheese. Overall this was one of our favorite cheeses during WineAndCheeseFriday. Although we first paired it with Pinot Noir, we wanted to see how it would hold up to a heavier wine, which, ironically, Neil thought was actually lighter. The cheese didn’t let us down, smooth, crunchy, so good and definitely still delicious! During the pairing of Barbera and Ewephoria, we agreed that the cheese brought out the fruit in the wine and was very smooth.

The next wine, Tres Picos Garnacha had lots of licorice! Neil said it was tasty and full-bodied. I decided to try this wine with the Sheep’s milk brie. The cheese was funky and reminded me of the pont leveque cheese that we had a while back during WineAndCheeseFriday (http://mferraro73.tumblr.com/post/50311926739/pinot-noir-and-pont-leveque-cheese-5-10-we-are). The Garnacha brought out even more funk in the cheese, not really the combination or cheese for me.

We tried the Moretti Syrah with dinner and I picked up a smokiness while Neil noted that it was medium-bodied. I didn’t really like it and there was lots of wine that night so I believe I just had a taste of it.

The final wine was HL Chenas, Cru du Beaujolais. It smelled sweet and fruity and tasted dry, light and fruity. Just to see what happened, I paired it with the Gouda cheese. I noticed the cheese to calm down the sweetness of the wine.

It was quite a night of indulgence! We drank lots of good wine, ate almost a whole wedge of the Ewephoria cheese, and tried a new Lebanese dish. Thanks guys for a great night!