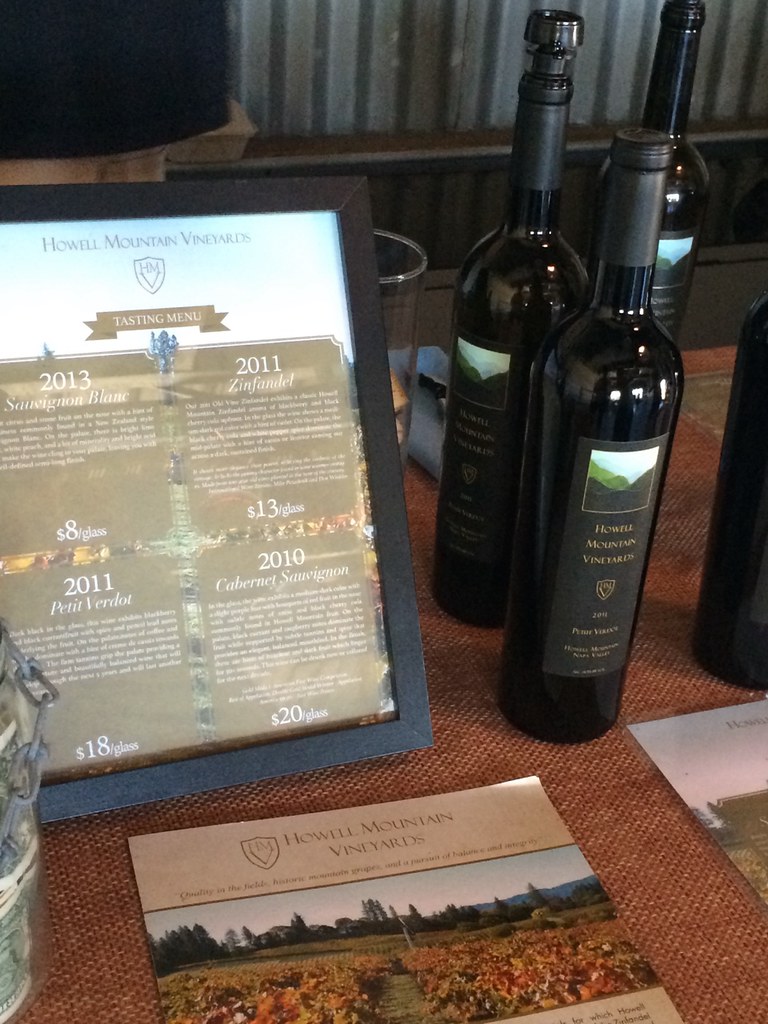 When we visited Sottomarino back in March, http://mferraro73.tumblr.com/post/115417517063/treasure-island-and-wine-tasting-at-sottomarino, we had the chance to try the wines at the Howell Mountain tasting room as well. Howell Mountain is a famed grape growing region in Napa Valley but this brand makes their wine on Treasure Island, as part of Winemaker’s Studio. (http://www.howellmountainvineyards.com/wine-shop.html)

Similar to Sottomarino, I represented this brand at the Winery Collective but had never tasted through their portfolio before. The wines available to sample that day were as follows:

The tasting started out with a bang! Neither Neil or I are typically drawn to Sauvignon Blancs but we found this wine to be different from the Sauvignon Blancs we tried in the past. Although I was not fond of the aroma, we could both identify an oak influence and quite a bit of fruit. It wasn’t the citrus we’ve come to expect in a Sauvignon Blanc though. We decided it was too good to pass up, so we purchased a bottle for a future WineAndCheeseFriday.

The Zinfandel was up next. I noticed a soft fruit aroma with some spice and a light texture. Neil described it as having a good round flavor and being very tasty!

I had never tried the Petit Verdot before so I was anxious to determine the flavors. I found vanilla and licorice aromas, a light texture, and a subtle earthiness. Neil and I have previously determined how different our palates are but it still surprised me that he called this wine “big, dry and thick.”

The final wine is one that I poured at work, for the duration of my time there. It took us all quite a few tries to determine what that distinct aroma was, until one day, we figured it out, yellow banana peppers. This is definitely not a wine aroma that gets identified all that often but may also be described as tangy. What usually drew people to this wine was the soft, smooth flavor, and on some days the strawberry fruit, which I did notice when tasting the wine that day. Neil found it to be smoky, and even went as far as calling it a tasteful cab.

I guess it’s fair to say we both found a few winners that day. That must be why the Howell Mountain area is so popular!