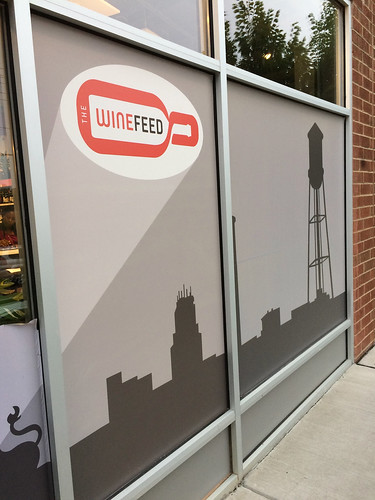 Being the Wine Fan that I am, people sometimes send me listings for wine events. The Wine Feed, a new wine shop in Durham, puts on a weekly #WineWednesday Free tasting, so how could I resist checking it out. When we arrived we found out the theme for the week was “Italian Wines” and it was being sponsored by a local distributor of wines from Italy. We happily joined in to taste the three wines available that evening. 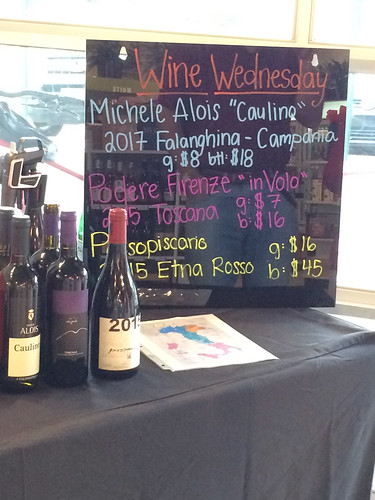 The first wine, Caulino, is grown in Campania by a family who was previously in the textile industry. As we swirled our white wine, Neil and I agreed that it had sweet aromas of honey and some fruit. Neil’s first sip seemed oaky to him but then the distributor let us know it’s a stainless steel wine with malolactic fermentation. The difference between the flavors produced in both processes is something we’re still figuring out. The wine seemed light-bodied to me, with mineral and acidic citrus flavors, that included a tart finish. Neil described the flavor as mineral, sweet crisp and honeydew melon. He decided we should purchase a bottle of this easy-drinking white wine. 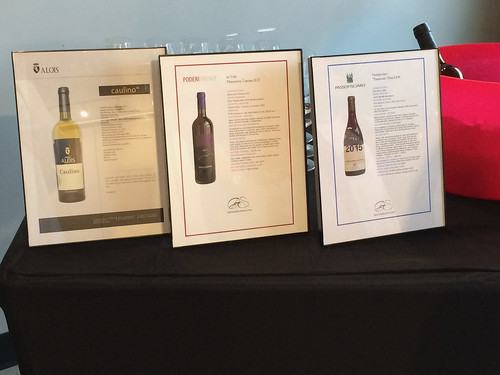 The “in Volo” is a red wine that comes from a part of Tuscany that used to be an abandoned area but now they are growing grapes. The wine is made from 50% Sangiovese and 50% Montelpucliano grapes. As Neil swirled the wine, he picked up aromas of rocks, which I described as earth but I could also find berry aromas. This wine also seemed light to me but it had a nice smooth finish. Neil thought this wine had tart cherry flavors, a hint of spice but also a dry and fruity finish. When I first tasted the wine, I noticed dark fruit and slate but then as I had a little more wine, it became very earthy to me. With these tasting notes, I wondered what would be a good pairing for it and the tech sheet suggested red meats, stews and vegetables. Hmm? I’d be curious to see how that works. I know Italian wines are really meant to be eaten with dinner. 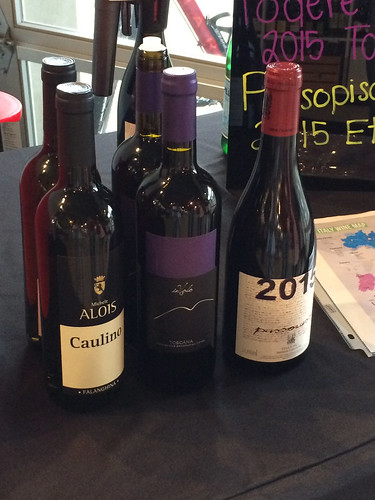 Our final wine, Passopisciaro passorosso, was a red wine that was created from old vineyards just starting to be revitalized. In this part of Sicily, you will find Nerello Mascalese grapes. It seemed this wine was being savored because the samples were poured through a Coravin. I guess he wanted to be careful with this $45 bottle of wine. Neil described the aroma as tobacco and thought this may have been the first wine that he identified that aroma. I felt the aroma was raspberry with earth. We both thought it was a dry wine but Neil was curious to see what I thought of the flavor, because he felt it was pretty distinct. I called it berry and volcanic but it reminded him of a basil tomato sauce. He also picked up flavors of bright cherry. When I was writing up the entry, I looked into the winemaker notes and herbal notes were mentioned. Great job Neil!

We decided that although the tasting was over, we should continue celebrating #WineWednesday so we headed over to the tasting bar for a couple glasses. I kept on theme with another Italian wine, Cantina del Pino, Dolcetto d’Alba. I remember liking this type of red italian wine when I tasted it before. They let me taste a sip to be sure it’s what I wanted but my mouth was still pretty earthy from those previous wines. I could tell that once that wore off, I’d be happy to drink the Dolcetto so I decided to give it a go. Neil opted for a California Pinot Noir by Champs de Rêves. He didn’t have to be sold on it, he’s been craving some Pinot for a while. 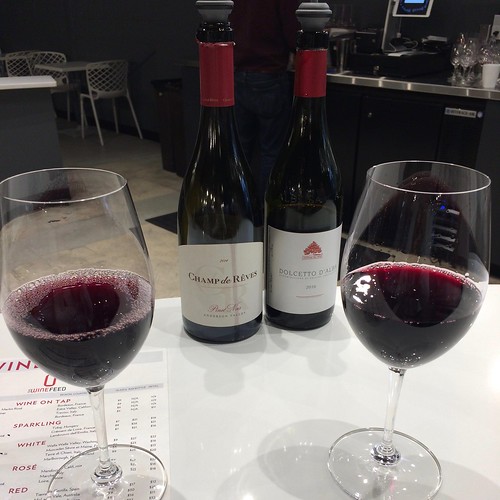 Since Neil knows how much he likes Pinot Noir, he gave it a quick taste and he knew it was for him. He did think it was a little drier than he’d expect. I was lucky enough to try a tiny sip of it, and thought it smelled and tasted smoky. I happily passed the glass back to Neil.

My Dolcetto had a really nice velvety texture. I identified red licorice aromas and flavors and after a few sips, the flavor of baked bread. That was a bit surprising! Nothing would have stopped me from that luscious texture though. I was very happy with my choice.

As the night to drew to an end, we figured we should head home to eat. We had a really nice time and in addition to the white wine from the tasting, I picked up a couple other bottles for a future Wine and Cheese Friday entry. It was a productive and enjoyable night at The Wine Feed! I’m glad the tasting and the shop were suggested to us. 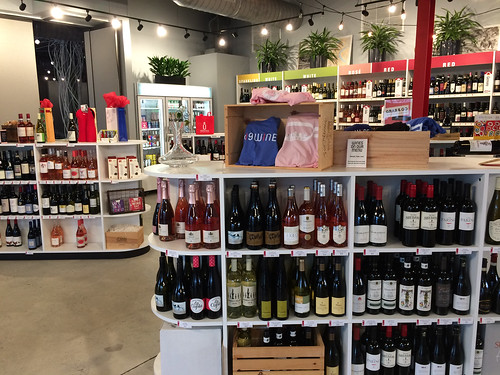