Shortly after arriving in Billings, Montana, we found out there was a local winery, Yellowstone Cellars & Winery. Then as luck would have it, we mentioned to our AirBnB host about #wineandcheesefriday and he presented us with a bottle from there. Right around that same time, we found a Farmer’s Market, which is one of our favorite places to find cheese. Grindy’s Cheeseballs, had a booth there and they offered about a half dozen spreadable cheese options, so we picked up two different ones. Now if only we could get over those head colds so we could enjoy them!

We were finally feeling better so we could have our Montana WineAndCheeseFriday! We knew the wine was a red blend so let’s see what we notice for aromas and flavors. I picked up aromas of dry grapes and dark fruit but then I was really trying to figure out the others. Could it be earth, clove, licorice or black olive? I couldn’t place it. Neil looked over at me and asked if Merlot was one of the grapes in the blend? Yesiree! He could definitely tell that the main aroma was Merlot cassis! He also noticed black pepper and dark fruits. The flavors were a little easier for me to identify. The wine was dry with dark fruit, a hint of spice and some acid. Neil found very similar notes of big dark fruits and berry spice. He was surprised by how dry the finish of the wine was. We could attribute that to the Cabernet Sauvignon in the blend. And if you’re wondering the other grape was Syrah which follows through with some of the other notes we mentioned. 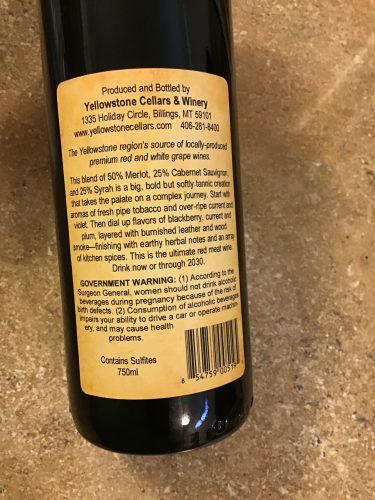 We chose to have the “party ball” by Grindy’s that evening. It was the original one that they created and still their most popular. How can you resist something called Party Ball? As I opened up the wrapping, I could smell all kinds of flavors: garlic, cheese, nuts and herbs! Neil noticed something a little different-a slightly sweet aroma and candied or roasted nuts. There was a lot of complexity when we tasted it too. You not only pick up the cheese and onion flavors but the texture of the nuts too. Then the onion flavor lingers while chewing up the nuts until you get the finish of the walnut flavor. Yum! Neil was still having those sweet notes when he tasted it. He described it as earthy nuts, sweet and smoky with an onion flavor. It was so tasty that I wished I could get another one to have on Christmas! Maybe I can figure out how to make my own? 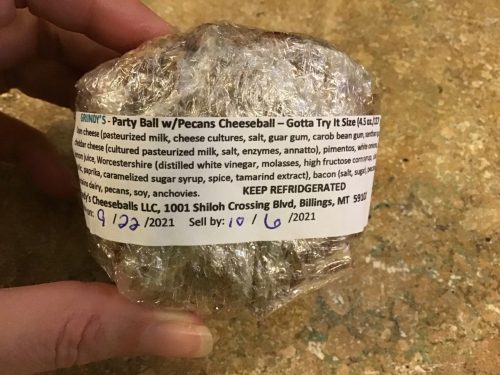 Next up, we paired the red blend and party ball. The ball was holding it’s shape pretty well so we were able to pair it without needing a cracker. That’s usually our goal so we can just have the uninterrupted flavors of the wine and cheese. I found the wine to have red berry aromas with a dry, slightly grape flavor. Then I took a second sip and there was a lot of spice. When searching for cheese aromas, I realized that it was onion and not garlic I was picking up. Since I was eating the cheese with my hands, I briefly noticed an herb flavor when I licked my finger but then after that it was more onion and cream cheese. Neil found the cheese to change to be much more onion and garlic with barely any sweetness. The wine was very dry and reminded him of the aroma and slight flavor of pickle juice. He also thought the majority of the berry flavor was lost. Its no wonder that he’d prefer to keep this wine and cheese separate!

I think the cheese helped the wine improve but this was when I kept finding all my red wines to be too dry. Neil liked the way the wine worked with our pork tamales, homemade salsa and black beans. He said the spicy meal brought out the berry in the wine.

Is this a wine I’d drink again? Maybe not but it’s always wonderful to try something local to where we’re visiting. I’m sure you’ve guessed that I enjoyed the Grindy’s Party Ball and we still had one more to try another night! 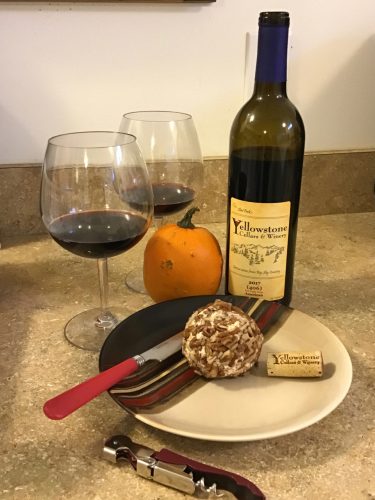