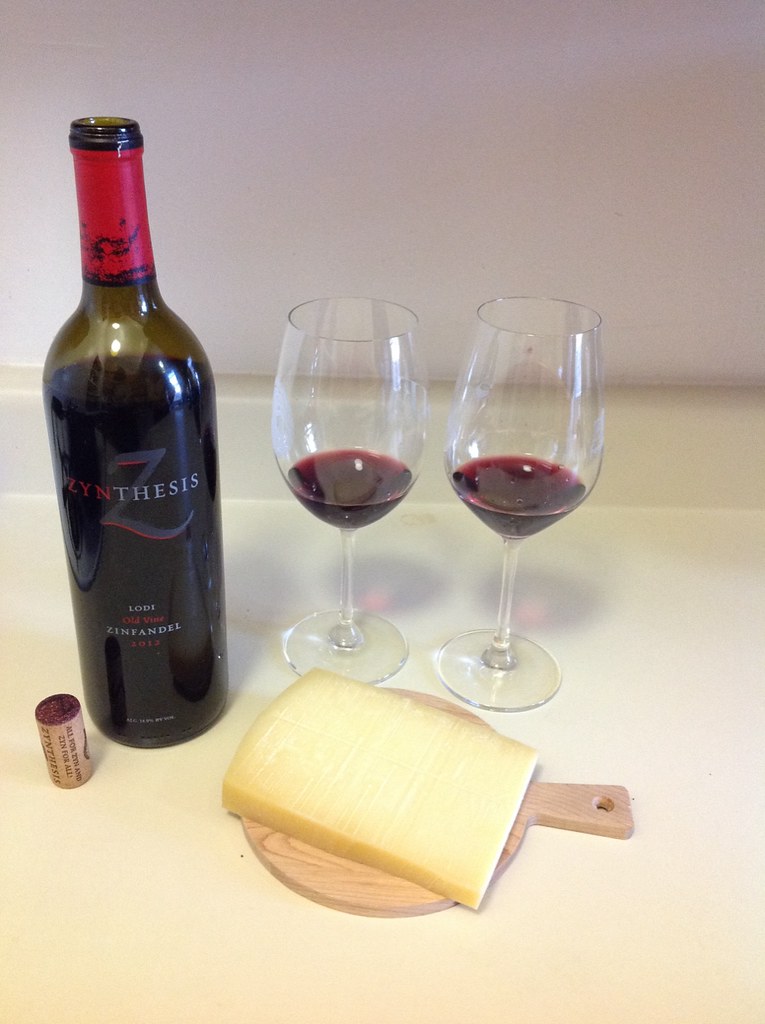 We purchased this Lodi Zinfandel during the BevMo 5cent sale. (http://www.bevmo.com) I have heard that Lodi is the Zin capital of CA so I had to check it out! According to the Lodi website, http://www.lodiwine.com/vineyards/old-vine-zinfandel, the wines are known for their “intense red and black fruit flavors of cherries, raspberries, and blackberries.” The BevMo description of this wine recommends pairing a strong cheese so I figured the Gruyere would fit the bill. We’ve used this cheese once before at the very beginning of WineAndCheeseFriday and I remember it being a little too intense for me. (http://mferraro73.tumblr.com/post/46997403195/pinot-noir-and-gruyere-sunday-march-24-things) Let’s see if my palate has changed?

It seems the Lodi description was spot on for Neil, he said the aromas were undisputedly cherry and strawberry jam. I didn’t get that at all, the aromas I identified were mineral and slate with a light fruit. I have heard before that the direction you swirl your wine will influence what you pick up. For the sake of argument we each looked at which direction we swirl the wine? I swirl the wine counterclockwise, while Neil swirls his wine clockwise. Ok let’s switch it up and see if the aromas change? Nope, stayed the same. Guess we both just have very different palates.

As far as wine flavors, I did pick up grape jelly but also a definite spice in the flavor and finish. Neil agreed with the jam and said his wine flavors were cherry and strawberry jam with a light spice. *

This cheese is slightly different than the one we tried in the past because it is aged. One of the flavor descriptions at the store was that it contained “crystals”. Sounds like one we will like! When I tasted the cheese, I noticed the texture was crunchy and dry, while Neil found the initial texture to be crunchy, but then creamy. The flavors were tangy and salty. Since I remembered this cheese being funky, I smelled it, to see if it was? After eating the cheese, I found that funky flavor, it was in the aftertaste. Despite the aftertaste, Neil and I really enjoyed the cheese and called it tasty and yummy! I’m glad we tried it again.

Neil really enjoyed the pairing of Zinfandel and Gruyere, because the reaction that occurred reminded him of “toast with butter and jam”. Pretty awesome! My combination was not nearly as amazing but the wine did become more earthy and I noticed more berries. Neil also felt the saltiness in the cheese was enhanced and pepper appeared in the wine.

*One of the unexpected aromas that Neil identified in the wine was spinach. He didn’t believe it so he checked again and was very surprised that he noticed spinach amongst all those berries. I have recently noticed green beans and broccoli aromas in the Pinot Noirs at work. Very weird but fun at the same time.