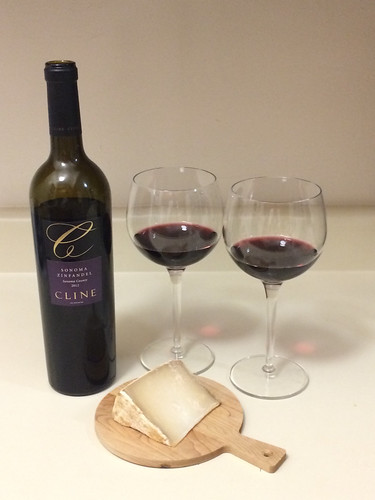 When we purchased this Zinfandel back in the summer at Cline Cellars (http://mferraro73.tumblr.com/post/95170593813/cline-cellars-red-blend-and-toscano-cheese-with) we were told to hold onto it for about 6 months before opening it. Having patiently put our time in, we decided to use it this week for WineAndCheeseFriday. Zinfandel is a wine Neil and I both enjoy but not knowing if it will have pepper spice flavors or jammy fruit flavors, it is always one that’s hard to pair with cheese. We have never tried a Basque cheese so we figured we’d see how it worked with our mystery wine.

I think the wine may have been anxious to get out of it’s bottle because as soon as we opened it, the rich aroma was pouring out. When I swirled the wine, I noticed aromas of spice, grapes, some pepper and a hint of smoke while Neil picked up berries, spice, smoke and some alcohol. As he was reading the back of the bottle, Neil asked me what fruit flavors I could identify and I hesitantly said blackberry and blueberry. He tasted black cherry and blueberry but said the bottle made note of strawberries. The dominant flavor I picked up was spice, including pepper and maybe cloves. Neil agreed with the spice, making note of the spice in the back of his throat and the fruit on the sides of his tongue.

We both really enjoyed the cheese! There were salty aromas and the texture was spongy and a little crunchy. I couldn’t tell it was a goat cheese by the flavor but thought it tasted salty, nutty and a little chalky. Neil picked up a light hay flavor and identified a milky taste. I found it to have pockets of different flavors. Since we were unfamiliar with this type of cheese we researched it online, finding out that Basque is the area in France where the cheese is made and tommes are cheeses produced from skimmed milk after the cream has been removed to make butter. Always fun to learn a little more about cheese!*

During the pairing of Zinfandel and Basque Tomme Chèvre, Neil was a little nervous about the cheese overpowering the wine but luckily that didn’t happen. He found the wine to have more of a fruit flavor and a round texture with less spice and some vanilla. The cheese had slightly less salt but it was still enjoyable. I thought the wine was a bit more mild right after the cheese but then the fruit came out more for me than before. The spice was still present in the finish of the wine. There was even a hint of saltiness in the wine, which I don’t think has happened before. It seems the salt flavor moved because there was less salt and more of a nutty flavor in the cheese. The combination of wine and cheese seemed to calm each other down so I would prefer the pairing compared to the wine by itself.

So, what type of Zinfandel wine was this? I’d say this one was a spicy Zinfandel but Neil would probably call it a fruity Zinfandel. Such is the life of the Zinfandel grape!

*We would recommend cutting off the rind of this cheese.