Would you imagine that people are drinking Rosé during this time of the year? Well Neil and I are still in Costa Rica and if we can find rosé in the store, we’re happy to drink it! We’ve never tried this one and it was a Syrah, which we enjoy. We also don’t drink Argentinian wine all that often so we were curious to find out it’s flavor profile. Those of you that are regular readers know the Costa Rican cheese brand, Le Chaudron, as it was just used in last week’s entry too! We actually picked it up during the same trip to L’Épicerie. Now onto the pairing of Argentinian Rosé and Nutty cheese.

As I swirled the wine, there were aromas of mineral, chalk and a crispness. It also seemed like there was fruit trying to come out but it was barely noticeable. Neil agreed with the minerals but in addition he found a floral aroma that seemed like roses, some petrol and smoke. I’d say we were both out of our element with this wine. The flavors were tart, spicy, dry, acidic with notes of grapefruit and some smoke in the finish. Neil picked up a minerality that surprised him, the same grapefruit and a tartness. He felt it was definitely more mineral than fruit. I’d say that was the most surprising part about this wine for us, and I’m going to link that to the wine region. What do you think? Do you typically drink Argentinian wines?

We were curious to see if the flavors might develop more as the wine warmed up. I was able to pick up the perfume a little more, after a few more minutes of tasting. We also wanted to make note that the color of this rosé was more of an orange than pink. 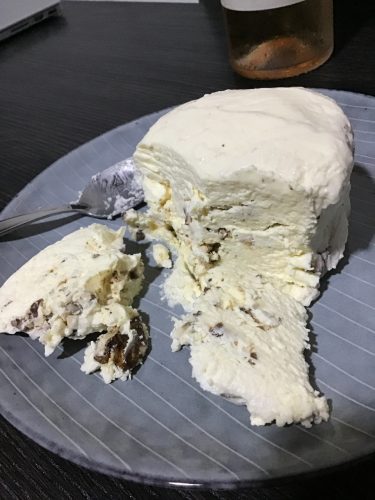 This cheese is called Petit Blanc Nuez, which translates to small white cheese with nuts, pretty self explanatory. We also want to point out that it’s a fresh cheese which means it has a lot of moisture and was created recently. A while back we created a Pinterest board about cheese with stuff in it. This would totally fit in with that collection!

Since this was a new cheese for us, we just jumped into the tasting to see what it was all about. Neil was already noticing aromas as soon as we put it on the table. He was reminded of pralines and cream ice cream and tangy milk. It definitely had a sweetness to it, that I called sweet milk, caramel and creme brûlée. Neither one of us had expected that. The texture was similar to our last cheese from Le Chaudron, something like ricotta. Neil found the texture to be very perplexing, he wasn’t sure if it was goat cheese, cheese whiz or a fluffy cool whip. He liked that it was so complicated.

The flavors were somewhat similar to the aromas for Neil. He described them as heavy cream, tangy milk and unsweetened ice cream. He also enjoyed the fact that the walnuts were part of the cheese. To me, the cheese was both tart and tangy but almost towards a sour milk. It left me wondering if I liked it or not.

Once we paired the rosé with the nutty cheese, the wine still smelled like mineral but it seemed like some of the fruit was coming out more. The flavor was softer and more mild, not nearly as tart. The cheese didn’t seem to have as many sweet aromas and it was still tart. It felt like the textures played nice together and I desired them together but I didn’t know why. When Neil paired them the tanginess of the cheese decreased but the ricotta texture was more pronounced and the wine had more minerals and a flutter of strawberry.

In addition to pairing the wine and cheese, we had some smoked trout, marinated veggies, and some fancy crackers. And once we had paired and matched all those flavors, I loved the trout with the vegetables. They worked so well together!

I’d say that the thing I take away from this pairing was that both the cheese and the wine made me think more than some others. And the wine continued to surprise me when I tasted it again about a week later. It was still pretty good and those minerals continued to come through. 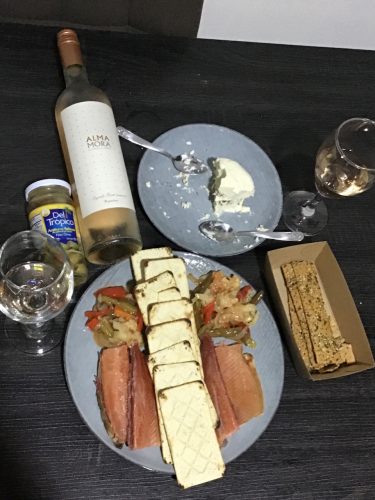