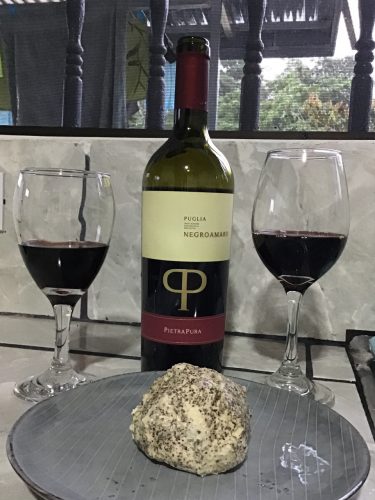 This was our second time visiting the specialty grocery store, L’épicerie, in Ojochal. We had such good luck with wine and cheese we purchased from there a few months back that we had to plan another trip! (https://wineandcheesefriday.com/best-of-wines-and-cheeses-in-costa-rica/) As we entered we had wine and cheese on the mind. What would we find this time around? Would there be more wines from other countries that our local distributors don’t carry? And what kind of cheese would we find?

The Italian wine that we chose was from a familiar region, but we didn’t know the producer. Perfect, we remember liking that region and grape! And the cheese was from a brand that we’ve really been enjoying this year, but it was a new type for us. Yes! Hooray for a #wineandcheese pairing! I had a good feeling about this one because typically Italian wines work so well with food and this was a cheese that was coated in black pepper and garlic.

We’d be tasting the wine, Pietra Pura Negroamaro, from Puglia. Neil has a knack for finding aromas of cherry cordial in many wines and wouldn’t you know it, this wine was one of those. He also identified a hint of pepper and some aromas of alcohol. For me the wine smelled like berries, earth, slate and cinnamon. I was pretty excited about that final aroma, I don’t find many wines with cinnamon. The wine was dry but then I found raspberry, another note that I look forward to. There was also some spice in the finish. Neil picked up cherry and earth flavors and still had a little alcohol showing through. 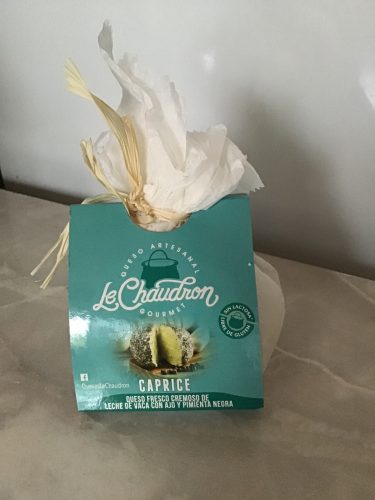 Le Chaudron, https://www.quesoschaudron.com, is such a tasty brand of Costa Rican cheese! The Caprice is probably the softest type of cheese we’d tried from them yet. It was presented so nicely too with the raffia twine around it. Neil called it “so fancy!”

There was no question that this cheese was coated with black pepper and garlic, the aromas were leaping from it! In addition, there was olive oil, some salt and what can only be described as “italian food aromas”. Neil described the aromas as big pepper as well as milk funk. It tasted spicy peppery, and like mushrooms with a funky milk finish. When describing the texture, Neil was reminded of ricotta cheese. Once he said it, I definitely agreed. This was a very peppery cheese, and I could even feel the peppercorns rolling around in my mouth. We could taste garlic and I liked how smooth the cheese was.

As a test, I took a taste of cheese with less coating on it. I could still smell the olive oil but it was kind of buttery too. I wanted to try it in a lasagna recipe, as it seemed it would go perfectly!

When we paired the Negroamaro with the Caprice, the wine smelled like pie! It was a little sweet with aromas of dried fruits. It made me think of dessert. The texture was a little softer but then still spicy too. The cheese still had the garlic but wasn’t as peppery in the aromas. The flavor got a little drier to me but it was very Italian. I really liked the way the wine changed with the cheese!

During Neil’s pairing, he said the wine had a lot more berry and a new type of pepper came out. The wine was round and there was fruity flavor dancing on his tongue. The cheese was tart and more creamy.

We both thought it was such a good pairing. It was so nice to finally find some wine and cheese to pair. Feels like it’s been forever!