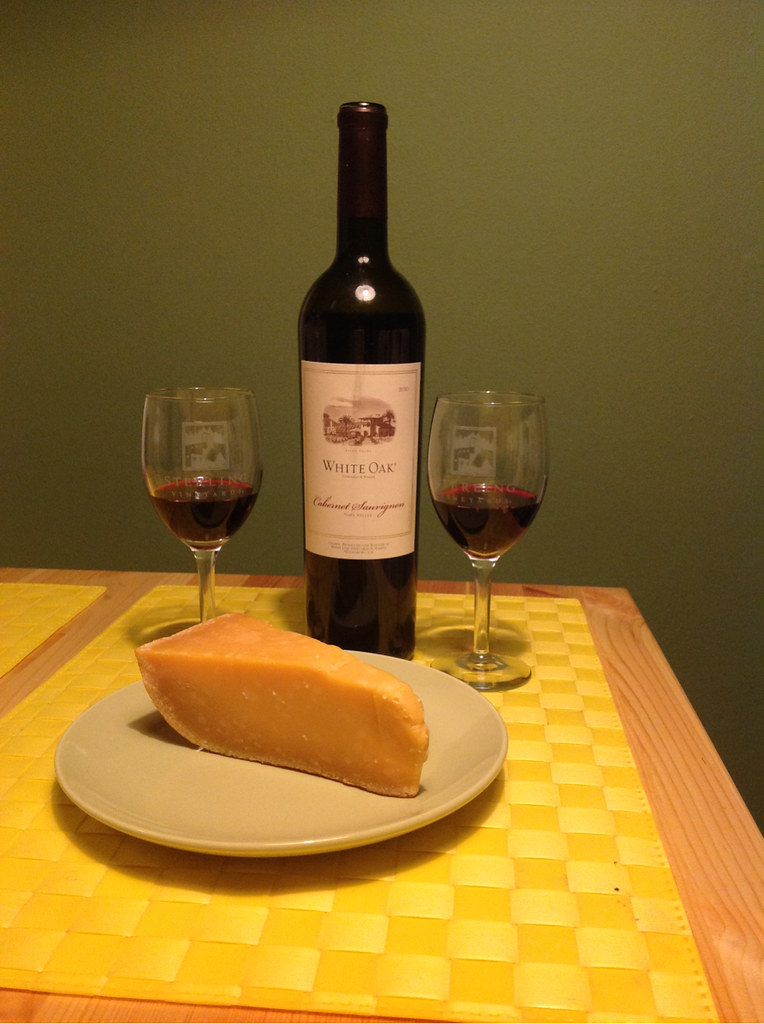 We purchased this wine from White Oak Winery (http://www.whiteoakwinery.com/) when we visited Alexander Valley a little while back. (https://wineandcheesefriday.com/sonoma-trip-with-geoff-and-sabrina/). During the wine tasting, we both enjoyed the wine and found it to be easier to drink than other Cabernets we’ve tried in the past.

During our initial swirling, I picked up fruit and alcohol aromas while Neil found berry fruits and pepper. This wine is fruit-forward, tangy, and light-bodied, with oak in the finish. We both agreed that it lingered well. Neil noticed the black cherry flavor but said it was a bit dry and flat on the throat. We did check the label and it was made from multiple types of grapes with Cabernet Sauvignon being the main grape. That’s probably why we could notice the difference from other Cabernets.

We tried an aged Gouda when we were at Eno (http://www.enowinerooms.com/) for WineAndCheeseFriday in September and really enjoyed it, lets see how this one compares? I thought it had a creamy and crunchy texture that Neil described as nutty. I found it to be kind of mild and a little salty while Neil picked up a slightly smoky flavor. Another tasty cheese!

We have already done a Cabernet and Gouda pairing back in June (https://wineandcheesefriday.com/cabernet-sauvignon-and-smoked-gouda/), let’s compare notes. During this pairing I noticed the cheese to make the wine lighter and not really fruity but there was still noticeable oak in the finish. The Gouda also became a little more tart. Neil said WOW, the wine gets fruitier, and the cheese gets creamier. So I guess we had different experiences.

During the pairing in June, Neil felt the cheese made the wine sweeter and it brought out a berry flavor in the wine. Maria tasted tons of oak but it was definitely influenced by the smoked cheese. Neil found it was a good combo, but Maria disagreed, the smoked cheese is too much for this wine.

So interestingly enough we had similar results during each pairing. The wine this time was much higher quality and the cheese was a different style of Gouda. Pretty cool! This might inspire us to redo some of the other pairings to see if they are also the same.