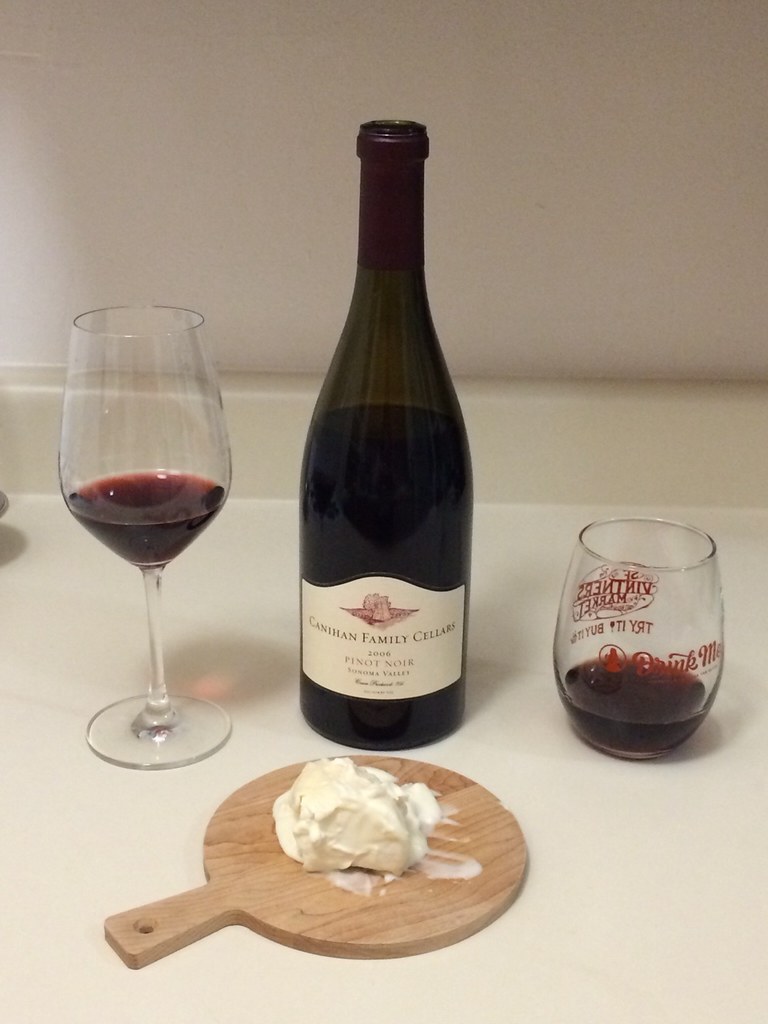 After tasting the cheeses at the Cheese Plus event (https://wineandcheesefriday.com/cheese-plus-tasting-second-day-saturday/) we knew we had to try another one of the Luigi Guffanti cheeses with some wine. We became so familiar with this cheese brand last year when we visited their cheese cave (https://wineandcheesefriday.com/a-trip-to-a-cheese-cave-arona-piedmont-italy/). What better wine to try with the Robiola a 3 latti (3 milks) than a Pinot Noir, especially one that I used to sell at work and already knew the characteristics. Since this wine is from 2006, we opened it at 630 and waited to taste it for about 45 minutes.

Neil and I both noticed the fruit aromas when swirling the Canihan Pinot Noir, but Neil called it a definite blackberry jam. I picked up a hearty aroma as well but thought the fruit was hiding in the taste and smell. There was an earthiness and a soft, dry feeling to the wine with a spice that I noticed in my throat. Neil described it a “Big pinot” with a pepper aroma, good flavor and a long, warm finish. Just to see what would happen, Neil took a small sip and a cherry flavor appeared.

Since the wine was 9 years old, we tasted it again, two and a half hours after opening it. I noticed a spice aroma and then spice, Earth, and fruit, kind of in stages, like that. Neil thought the wine was a lot fruitier and not as big as when we first opened it.

The Robiola a 3 latti had a light funk, reminding Neil of barnyard aromas, similar to grass and hay, as well as a salty aroma. So good! The flavors we identified were salty, more funk than the smell, tart funk, and slight funk, I guess we’d sum that up as “funk!” The texture was really interesting due to the 3 different milks used to make it, it was runny, creamy and thick, kind of similar to a triple cream and a top quality ricotta. We would say it was a complex cheese with many layers, and it had a lingering taste. Yum!

So what happened with we paired the Pinot Noir with the Robiola a 3 latti? I was able to pick up the fruit finish in the wine and the wine seemed to become much richer and a little funky. Strangely though, the cheese became less funky and more creamy. Neil noticed a big hit of fruit, and the pinot seemed to coat his mouth more with a hot spice and tingling sensation. He found the cheese to have the cow milk appear with the other milk flavors still there. And because the cheese and wine both linger, there was a constant interaction between the wine and cheese. WOW! We both really enjoyed the interaction between the WineAndCheese!