Wine and Cheese Day happens once a year, according to the calendar, on July 25, but for all you readers out there, you know it happens a lot more than that in our house! It’s been a little while since we’ve had time to sit around enjoying wine and cheese but for the official holiday, it was a must!

We knew we’d be driving past a Trader Joe’s so we’d certainly be able to find some supplies there. Currently, we’re in Massachusetts and the liquor laws here still aren’t quite up to date compared to the rest of the US. Why do you ask? Well it’s not possible to buy wine in many grocery stores. So this means you have to go to a wine shop or liquor store as well. Not a huge deal, but I must admit that I sometimes forget to pick up the “nectar of the gods” while I’m out.

Luckily, there was a wine shop next door to Trader Joe’s! Anytime we go to Trader Joe’s we have to pick up a wedge of Delice de Bourgogne cheese. If you’ve never heard of this cheese, shame on you! It’s one of our favorites because it’s so decadent. We knew we’d be including that cheese today. Neil grabbed it right away because there were only a few remaining. What else to pick? I told Neil, “I could buy every single wedge of cheese here, no problem” But in the effort of saving tasting time and money, we just grabbed a Syrah soaked Toscano cheese. This is another one we know we like.

When it came to wine, I had an idea to get a red Rhone blend. It’s been a little while since I’ve had Grenache and we like that too! While we were talking to the wine salesmen, he asked if we’ve ever had a white Rhone blend and we told him a story about a pairing we did with our friend Val. I just assumed that I knew the grapes included in white Rhone blends and then turned out to be way off with what we had 🙂 But that is the best (or worst) part about wine, when you think you’ve finally figured it out, there’s so much more to learn! Of course, we were sold on buying a second bottle of wine.

So today’s pairing will include both red and white Rhone blends with Delice de Bourgogne and Syrah soaked Toscano cheese. When we sat down to the pairing, Neil said “we’re going to pair everything with everything, not just one cheese with the white and one cheese with the red?” How could he expect anything less from me?

Let’s begin with the white blend, Chateau de Nages JT from 2016. The grapes included are 60% Roussanne, 20% Viognier, and 20% Grenache Blanc. I’m a big fan of Roussanne after my time working for a French Winemaker in California so that’s why we chose this specific bottle. As I swirled the wine wine, it seemed nutty with toast, vanilla and a hint of lemon. Then as I sipped it was crisp and tart. Once the wine warmed up a bit, I noticed the caramel flavors. Neil declared that the wine was excellent with its notes of vanilla, butterscotch, flowers and oak! We both agreed that it smelled different than it tasted, but I would expect that in a blend. And although it’s been quite a while since we’ve done a wine tasting, I think we nailed the notes pretty accurately for this grapes.

The red, Domaine de la Piégonne Ventoux from 2018 was a blend of 42% Grenache, 35% Syrah and 23% Counoise. This wine smelled so good to me, a mix of many berries, some vanilla and cocoa. Neil picked up a few different aromas though: earth, spice and plum. Then he found dark fruit flavors that were both tangy and tart. I described the wine as medium bodied with a tartness that seemed like cranberry and spice as well as a dry finish with acid that became soft. Love the fact that it changed like that and that this one also smelled and tasted differently! Oh how we’ve missed enjoying some wine! 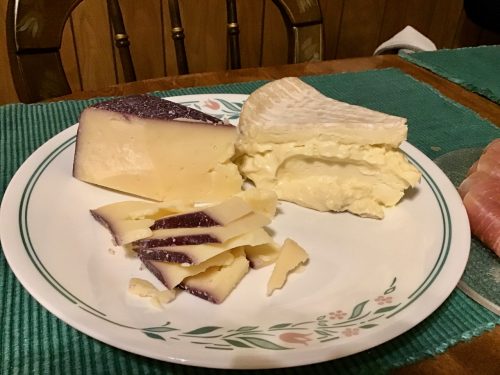 Now onto the cheese! Although we’ve tasted the Delice de Bourgogne so many times, we’ll still include some notes for you. * This cheese has aromas of salt, milk, butter and delicious cream so you know it’s going to be good! Neil even found a hint of creme brûlée this time around. The texture is so creamy but you can pick out little bits of the soft-ripened rind too. The different textures contribute to the magic of this cheese. The rind adds some brine but the overall flavor is milk, and a little salt. We always look forward to this cheese because it’s just so damn good!

Our other cheese, the Syrah soaked Toscano, is one we’ve had a handful of times too. Since we were celebrating both a wine holiday and a cheese holiday, we brought in some of our faves! The aromas of this cheese indicate that it’s an aged cheese which you can taste with those little crunchy crystals too! I was a little surprised that we didn’t really taste or smell the Syrah wine on the cheese though. Neil said “oh yeah!” when he sniffed the cheese for aromas. We both love the smell of salt and a little funk in aged cheeses! The texture of the cheese was dry and stuck to my mouth but there was some moisture too, I’d guess that makes it more of a medium aged cheese. Regardless of how old it was, we both said it was very good! And Neil thought it reminded him of a creamy version of pecorino.

We already discussed that we’ll be pairing both wines with both cheeses but can you tell what the expected pairings would be? If you guessed the White wine with the Delice de Bourgogne and the Red Wine with the Syrah soaked Toscano cheese then you’d be right! But do you know why? Well the soft creamy cheeses usually go well with the white wines and the harder cheeses work well with the reds. I think we’ve taught you all well for knowing what to pair! Just for the heck of it, we’ll do both cheeses with both wines because I’m always curious to see what will happen.

Our first pairing will be the white blend by Chateau de Nages with the Delice de Bourgogne. I found the wine to still smell nutty but it tasted more fruity, and then changed to caramel flavors. The cheese changed to be a little more tart but still creamy. Neil thought the colder wine was more like a tart apple. He agreed that the cheese was still creamy too but said that the first taste had the slightest hint of sour milk and then shifted to creme brûlée! Looks like we had similar results!

Next up was the white blend with the Syrah soaked cheese. I thought the wine was fruity with a slight caramel but then alcohol came out of the wine. The cheese smelled like milk and got drier and less flavorful. Neil also noticed the wine shifting to have more alcohol but he picked up mineral flavors too. His cheese notes differed though because it got a lot creamier for him. We’ve been warned before about pairing salty cheeses with wine because the alcohol tends to come out more easily. Oh well, always fun to try out a pairing just to see!

The red blend by Domaine de la Piégonne with the Delice de Bourgogne is the next unexpected pairing. I picked up tart berry and earth in both the aromas and flavors of the wine. The cheese didn’t have much aroma but was still so creamy and buttery. Neil wondered if the wine was getting too warm, because it seemed musty to him now. The wine also had an element of spice and berry but the cheese got a little tart. Not his favorite of the pairings but I think the cheese was able to hold up to this red.

When we tried the red wine with the Syrah soaked Toscano cheese, Neil said there was lots of cassis in the wine with big berries! The cheese had a creamy milkiness to it but there was less salt. The wine had aromas of graphite and undertones of tart fruit while there were spicy, tart and dry flavors. I agree that the cheese was milky but then I also found those grapes with the wine! So yes, the more traditional pairing with the red wine had better results.

Neil ended up liking the two “more traditional” pairings but I’d say I preferred both the wines and cheeses on their own. We do know how much we like them all individually and I think I’ll keep them that way!

We hope you all had time to enjoy some wine and cheese over the weekend to celebrate #WineAndCheeseDay but if not, there’s always time now to have them!