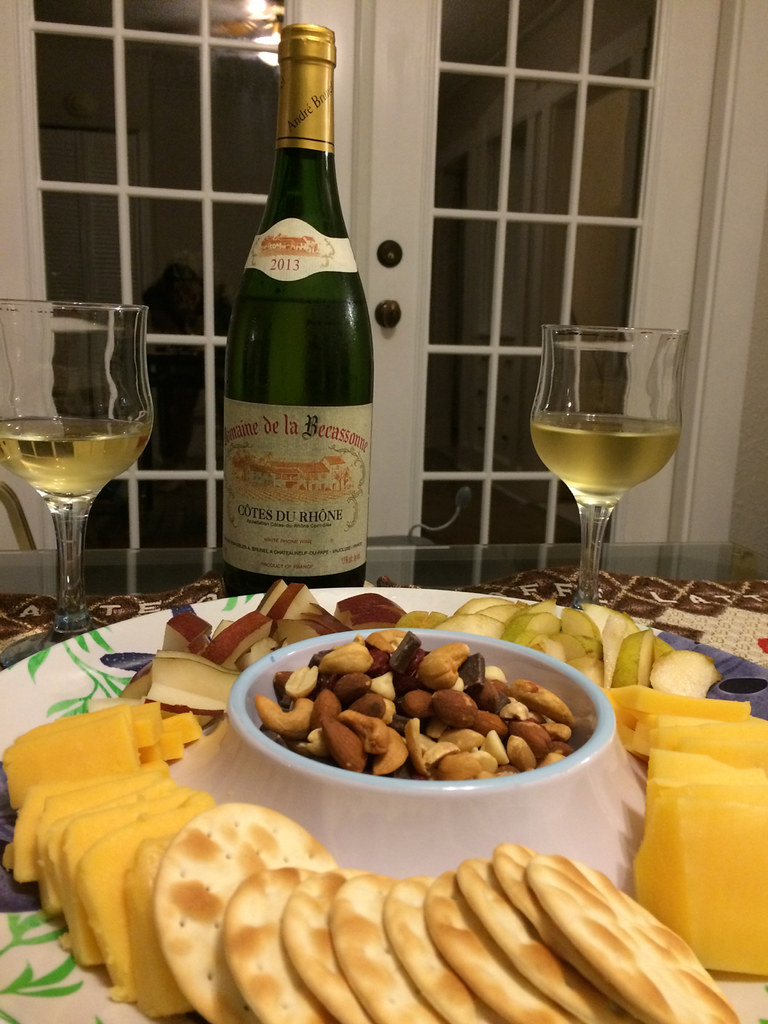 Neil went out of town for work at the end of January so I figured that’d be a great time to have my neighbor Valerie over for some wine! We’ve done a few wine tastings together* and it’s always a fun time! She usually likes white wines so I thought this Rhône Blend would be something new for her to try. (Sadly, this wine is our final one from our Christmas present at West Palm Wines.) Without looking at the label, I gave her some varietals that would be in the wine and she set out to find some foods to pair with it. She was really into it and found the appropriate cheeses, fruits and even snack mix to complement the wine. Her research pointed her to Gouda, Double Gloucester and green and red pears. So without further ado, our night of wine, cheese, fruit and analysis!

During our swirling we both identified pear aromas, so we figured Val’s fruit choice was right on par. I thought the aroma was closer to canned pears and she said there was also the aroma of white grapes. She pointed out that after she swirled the wine a bit the pear aroma seemed to dissipate. So she stopped and waited for it to come back. Talk about analytical wine tasting! After this happened a few times, she linked the aroma dissipation to the wine warming up. So she made me taste a glass that had warmed up too and see if I agreed? She was right, the wine almost seemed stale with flavors of mineral or alcohol. How strange! Once we made this connection, we promptly created an ice bath for the rest of our tasting.

So now we taste the wine, right? I found the wine to taste crisp but also soft on the tongue, there was a warm spice maybe white pepper, a hint of sweetness and a dry finish. Val noticed a combination of white table grapes and pear flavors and the finish reminded her of a lighter version of Sriracha!

Let’s start with the tasting notes for Gouda (the cheese next to the green pears in the photo). It smelled like milk and salt to me. The texture was kind of rubbery and I picked up milk, a rich flavor and some funk in the finish. Then I realized it tasted like baked macaroni and cheese, yum! She said it was smooth and silky and it reminded her of the texture of baby bell cheese. She preferred this cheese over the double gloucester.

When we tasted the double Gloucester (the cheese next to the red pears), I smelled salt but it seemed really similar to the gouda? The same flavors of milk and salt were there but it had more of a creamy texture. It was also a little sharp. (When Val came over with this cheese, I was so shocked that it was the yellow half of what we just had as part of the Huntsman and Bordeaux pairing). Val thought this cheese reminded her of Cheddar or something she might grate onto tacos.

We continued to taste the wine, cheese, and other goodies throughout the night. When I tasted the red pear it seemed clean and mild. The green pear was sweet. Then as an experiment, I tasted the green pear, red pear and some wine. A spice appeared then that was pretty tasty. I really enjoyed finding spice in a white wine, I think it was the first time that happened! Val tried the dried cranberries from the trail mix with her wine and also had a spice appear. I didn’t have much of a reaction from that so I just kept eating the pears.

Ok back to work, the pairing of Domaine de la Becassonne Côtes du Rhône White Wine with Gouda. When I paired the wine with the gouda, the wine smelled sweeter and still had spice. The cheese became more buttery but there was still funk in the finish. Val was excited that tasting the cheese, made the pear aroma come back to her wine! She also found the wine to get more grapey.

Then we paired this French Rhône wine with the double gloucester. I didn’t get as much of a reaction with this pairing. The wine was a little sweet and then some spice. I tried it again and the wine was mild with minerals or alcohol. Val found the cheese to dull the alcohol flavor but not change the wine. She made note the the cheese flavor was still lingering in her mouth. I think we preferred the pairing with the gouda.

Once we did this tasting, I realized I had tried the California version of rhône-style whites before but never actually had a French one. The “rhône style” wines I’d tried in CA were a blend of Viognier, Roussanne, and Marsanne so I assumed this would be mainly Viognier, and that’s what I told Val when she was getting all the food prepared. During our pairing, I looked at the actual breakdown of this wine and it was made from Roussane, Grenache Blanc and Clairette Blanc. Oops, guess I should have checked ahead of time, we all know what happens when you assume!

Since these were some new varietals for me, I hit the web to see some flavor profiles. I learned that Clairette blanche was often used to make vermouth, Grenache blanc tastes like pears, and Roussanne can taste like pears with hints of pepper. I guess Val and I were on the correct wavelength because our pears and spicy notes still worked out great for this wine! We always have such a good time wine tasting together. And apparently wine drinking, because we finished the bottle by the end of the night. Thanks again Valerie for bringing over all the tasty treats!