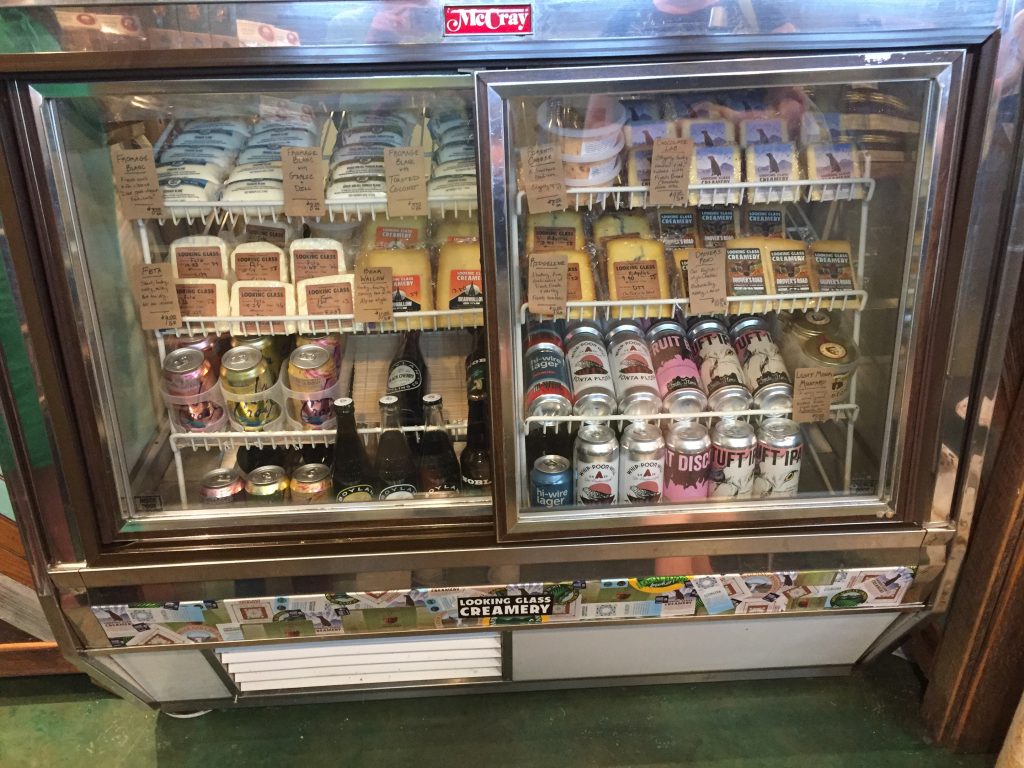 We visited Asheville, NC, a few weeks back with our friend Doris. While we were coming up with ideas for the trip, I searched for local cheese shops. We were staying in Fletcher which is about a 20 minute drive outside of Asheville. Imagine our surprise when we found Looking Glass Creamery on that list and it was only a few minutes away from our AirBnB. We chose to go there Saturday in the early afternoon. The timing couldn’t have better as the sky opened up into thunderstorms just as we walked into the shop. 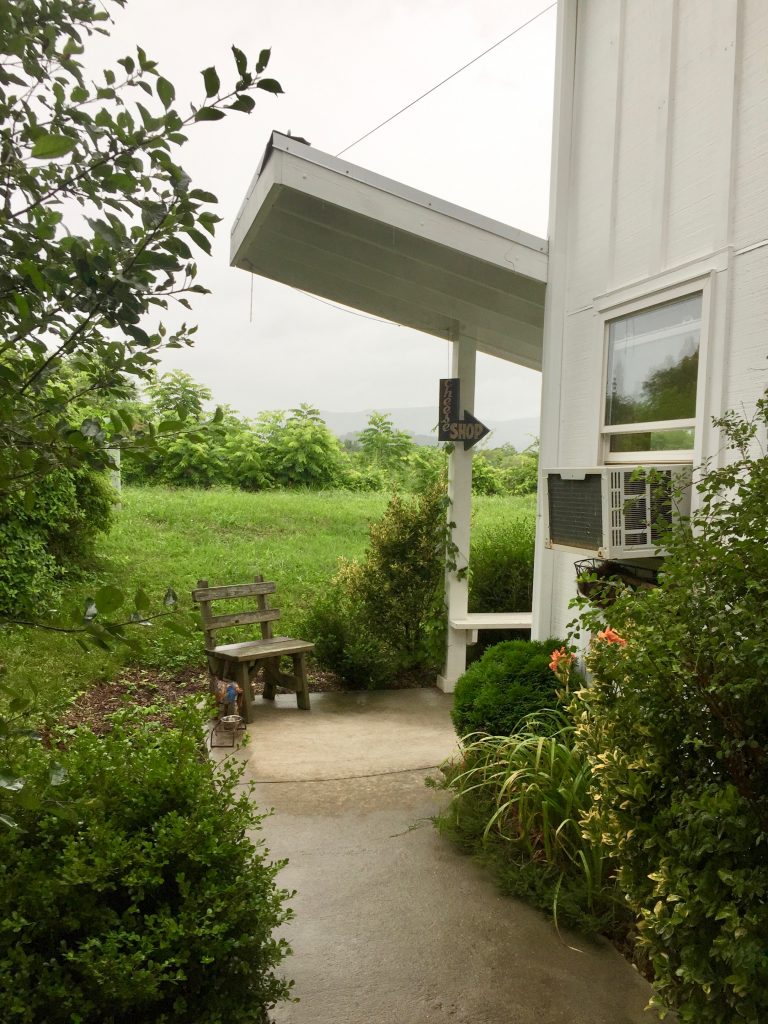 It was a very cute set up with a small cheese shop as you entered, and a cheesemaking facility off to the back. Sean greeted us that rainy afternoon and we began talking cheese. He told us the dairy farm is one hour South of their tasting room. Although they did start their cheesemaking in that back room, there was now a dedicated manufacturing area at the farm. He pointed out some samples of fromage blanc off to the side and asked if we were looking to buy cheese or enjoy a cheese plate upstairs. We didn’t realize there was another part of the building. Of course we’d like to have a cheese plate! 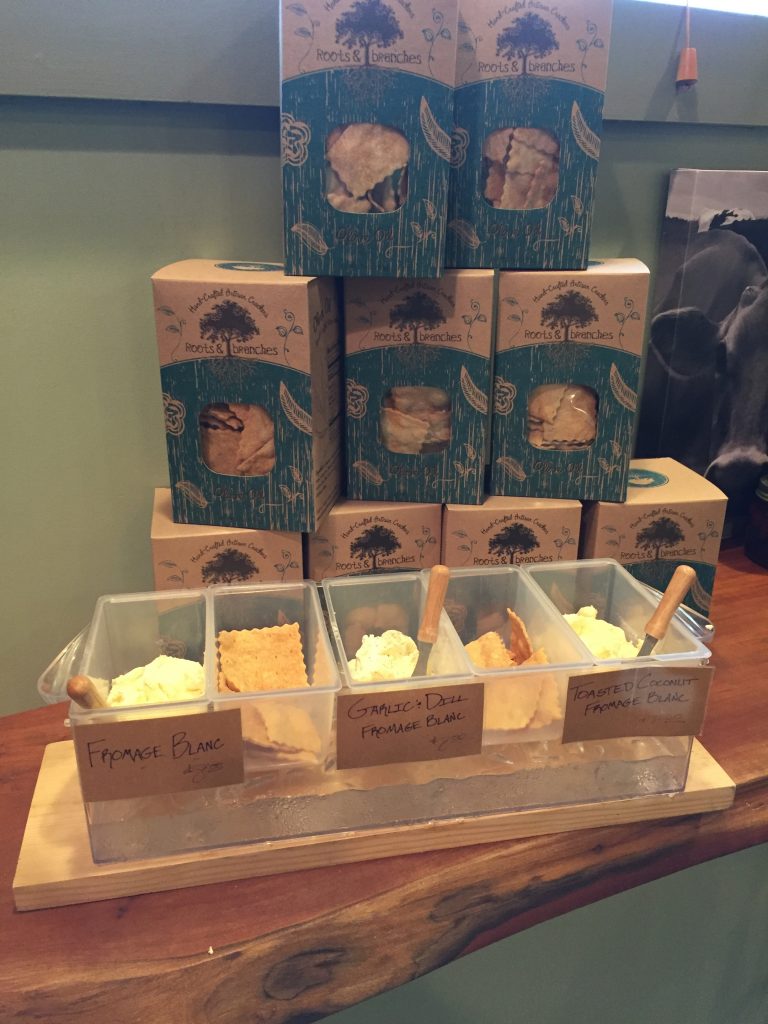 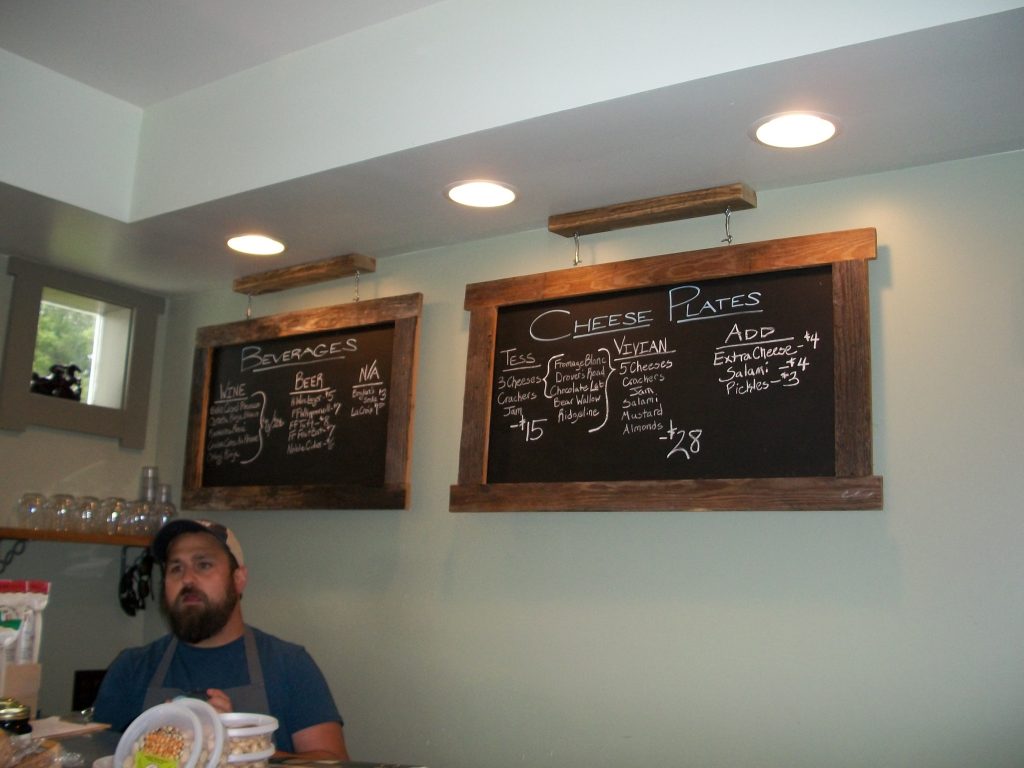 They sold a few wines to pair with their cheese as well as some Boylan’s Cane Sugar sodas. I chose a glass of Bele Casel Prosecco while Neil and Doris grabbed some soda. We made our way upstairs and found out there were so many comfy chairs and couches up there. What a perfect way to relax while it down-poured outside! I took a quick sip of my prosecco and recorded some tasting notes. There were dry, mineral aromas and crisp, fruity flavors. 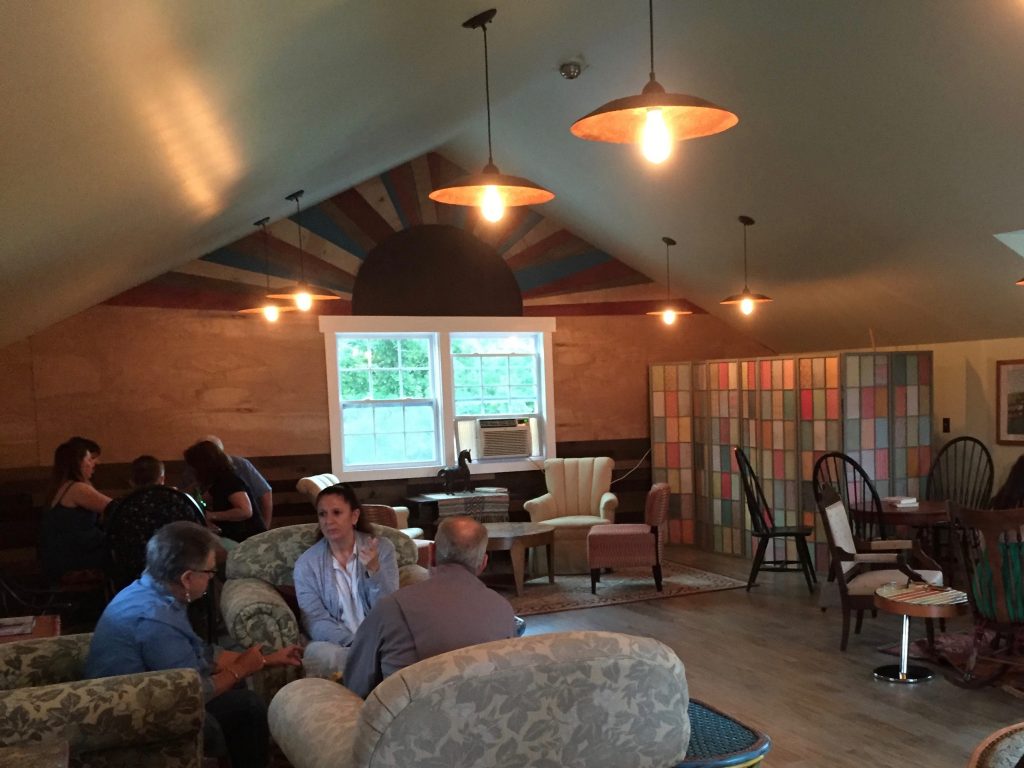 When our cheese plate arrived, I listened carefully to hear what Looking Glass cheeses we’d be sampling. No matter how hard I tried to pay attention, I still had to run back downstairs to double check that I had the names right. Doris has never been to an official cheese tasting before although she does enjoy eating cheese. Earlier that weekend, we also brought her to a wine tasting. All kinds of new experiences when you hang out with a wine and cheese couple. 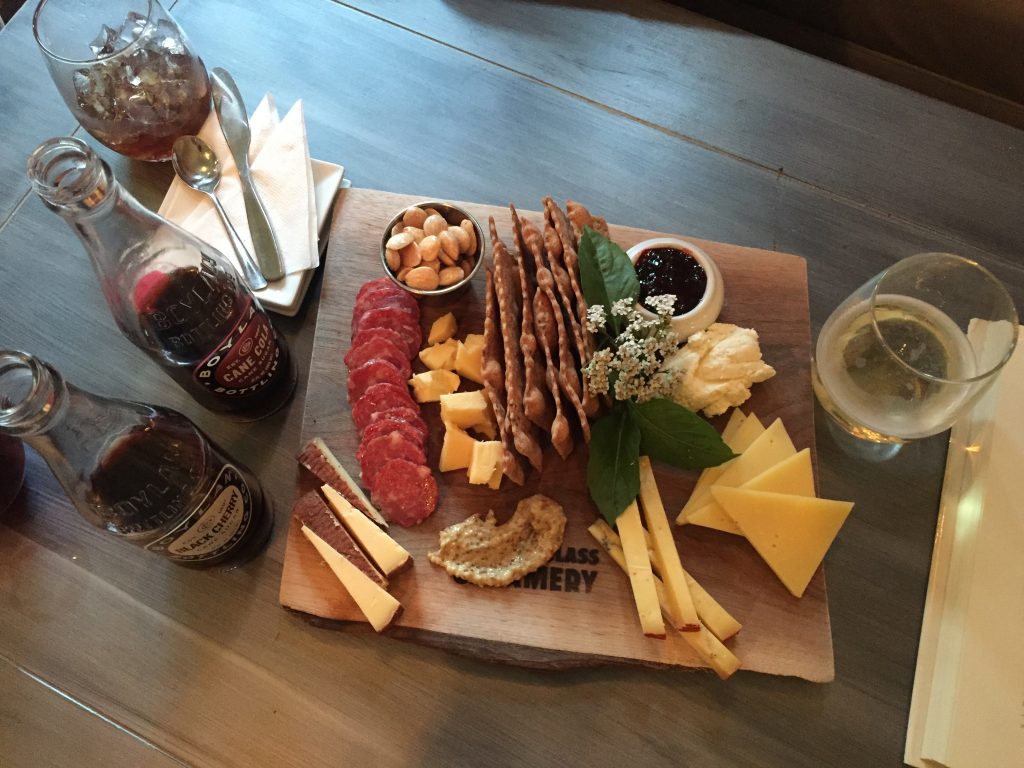 Here’s what was on our cheese plate, complete with descriptions so you can figure out which one is which as we describe them for you: 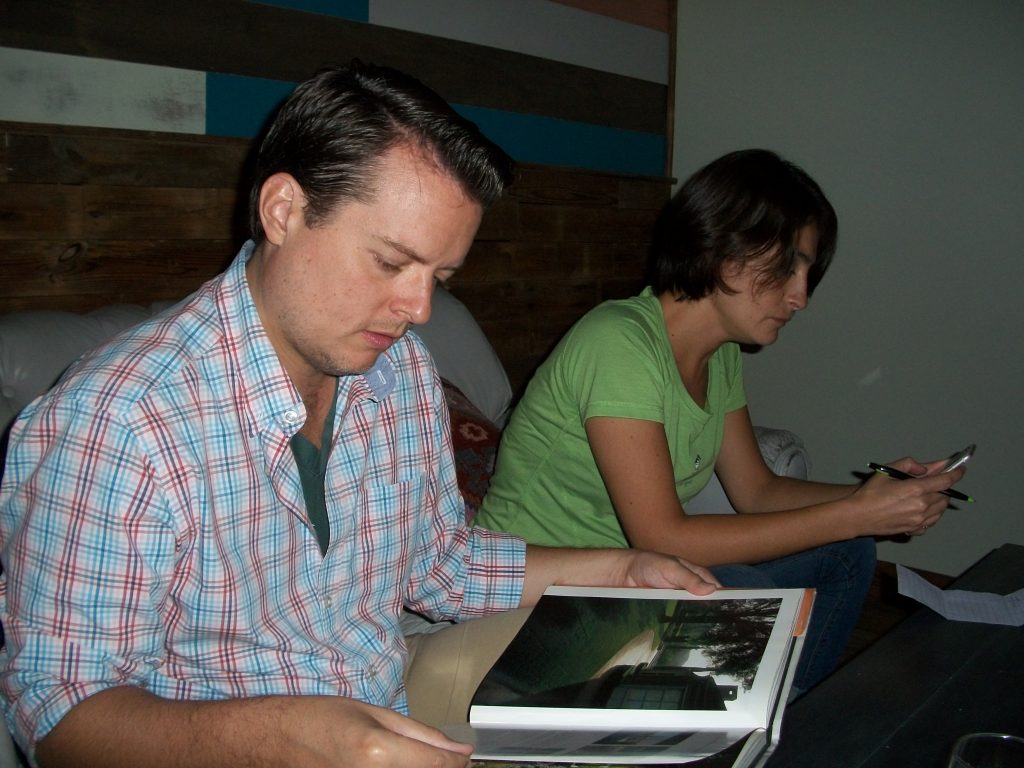 We began our tasting with the Fromage Blanc. I knew it looked like chèvre but didn’t realize this was made from cow’s milk until the end of the tasting, when I was asking Sean about the cheeses. Doris thought it was a mild cheese and she really enjoyed the flavor of the cheese and jam on the cracker. These crackers can be bought at Looking Glass too. I couldn’t really smell the cheese but the cracker sure did smell good. There was a mild flavor to the cheese and it was very nice with the jam! As I paired the fromage blanc with the prosecco, the wine became more mineral.

The Drover’s Road cheese reminded Doris of a mild version of sharp cheddar cheese. She described the texture as crumbly and moist and thought it was a very flavorful cheese. Neil found the cheese to be very milky and buttery. I picked up funky aromas and could taste cows milk. I wondered if it might be washed in beer, so I asked when Sean came up to check on us. He said it’s not beer, but malt is used in the process. Kind of fun to think through the cheesemaking process when tasting it! The prosecco became fruitier when paired with the Drover’s Road cheese.

We’d try the cheese cut into triangle slices, Bear Wallow, next. Doris called this a mild cheese but she tends to like mild cheeses so that was ok with her. I could smell the milk and identified butter flavors. I really liked the texture of this cheese and could tell that it would be considered an aged cheese. When I paired it with my wine, the wine cleansed the cheese off my tongue and then became fruity. We’re not hearing much from Neil but he was happily tasting all the cheeses to figure out which order we should follow. He’s so helpful!

Doris was a little puzzled by the next cheese. She thought it might have been a blue cheese since she could see some “veins” in it. As we just mentioned, she’s not into those “big” cheeses so she was pleasantly surprised when she tasted the Ridgeline. She said it wasn’t scary and I told her, it looked more like ash in the cheese and how it’s common to find in many cheeses. Neil really liked this one and said it was one of his favorites. As I smelled the cheese it seemed pretty mild to me but I didn’t really like the way it squeaked on my teeth. It tasted pretty sharp and had a distinct flavor. This bold flavor carried through into my prosecco too with the acid increasing in the wine.

The final cheese was called Chocolate Lab, how can you say no to a cheese named after a puppy dog? Well, it was a bold one!

The brown rind was actually rubbed with cocoa powder and this is a beer washed cheese. Doris said “Yup, That’s a funky one!” Then she surprised herself, although it did smell fun-kay, the cheese really didn’t taste all that strong. She ended up liking it! Neil agreed that it was super funky but he could also smell the cocoa. I really pondered what the funk was? I knew it tingled my nose and I could even feel it in my chest. It was a pungent one for sure! I thought it might be like sausage with sauerkraut or maybe kimchee? The cheese had a dense texture and tasted milky, creamy and earthy. All the flavor in the cheese made the wine seem lighter. There may have been changes in the cheese from the wine too. It seemed a bit more briney and maybe creamier. 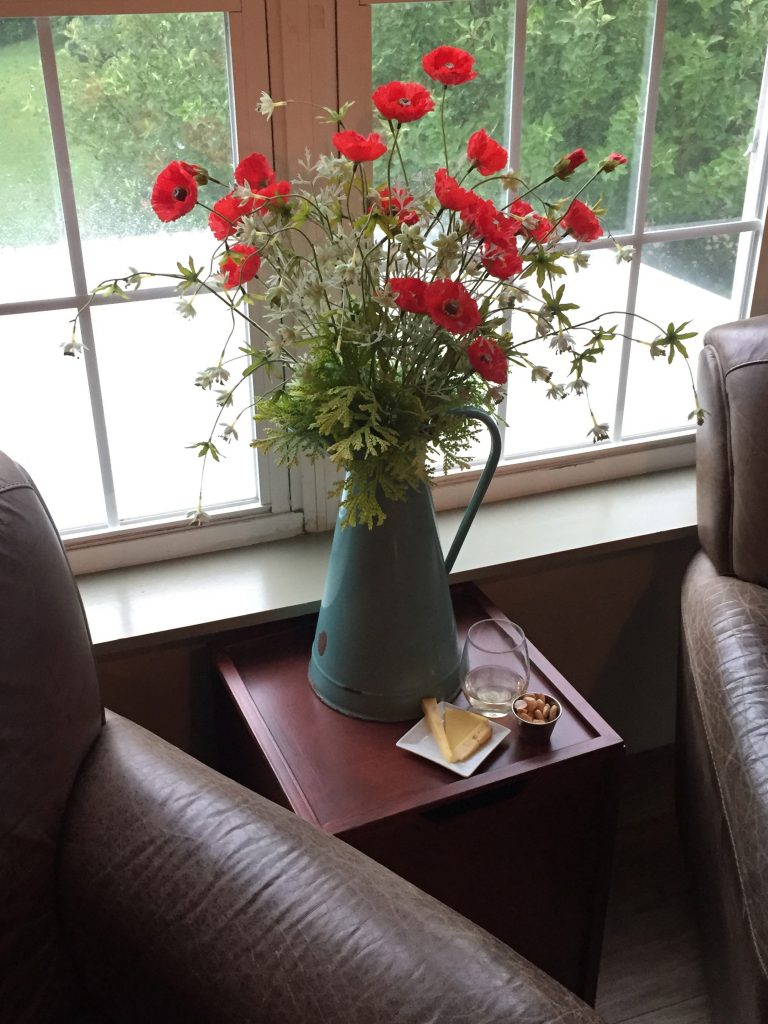 We had a few other notes from the tasting too. I thought the mustard smelled great and described it as “zippy from horseradish.” The almonds with oil on them were a delicious touch too! Speaking of delicious, I loved the combination of fromage blanc with the jam. I think I just sat and ate that pairing for like half the time we were there. Doris really liked the pairing of salami with the Chocolate Lab cheese! She also thought the Drover’s road cheese would be a nice cheese to melt and might even work for Fondue. Neil’s favorites were the Ridgeline and Chocolate Lab cheeses.

Then Doris surprised me as we talked about her favorites. She wanted to bring some cheese home to share with her sister and was looking for advice. I pulled out my notes and told her which ones I had down as her favorites. She described what kind of cheese Vicki likes and I suggested either the Drover’s Road or the Bear Wallow. I guess Doris was feeling adventurous because she said she’d like to bring back the Chocolate Lab and the Ridgeline. Wow, alright! We’ve converted her. She also picked up the salami and the crackers so she could have her own cheese plate at home. I wonder how she and Vicki enjoyed it when they tried it together? 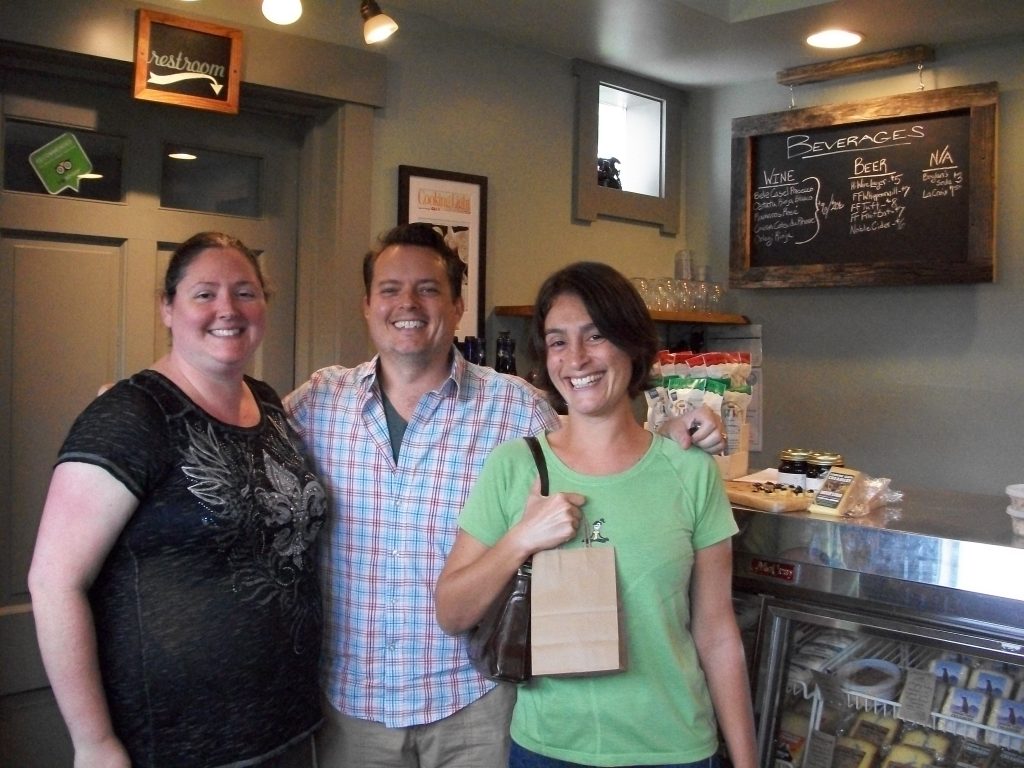 We agreed that all of the cheeses were fantastic and super high quality. What a great find for a rainy afternoon and a super place to choose as our one “cheese experience” of the trip! We even got to learn a little about cheese from all the cheese books scattered around upstairs.

Would you like to try to find this cheese outside of Asheville? Sean let us know that it’s for sale in the Durham Co-Op, too. That’s terrific because we can enjoy more next time we’re back in Durham. 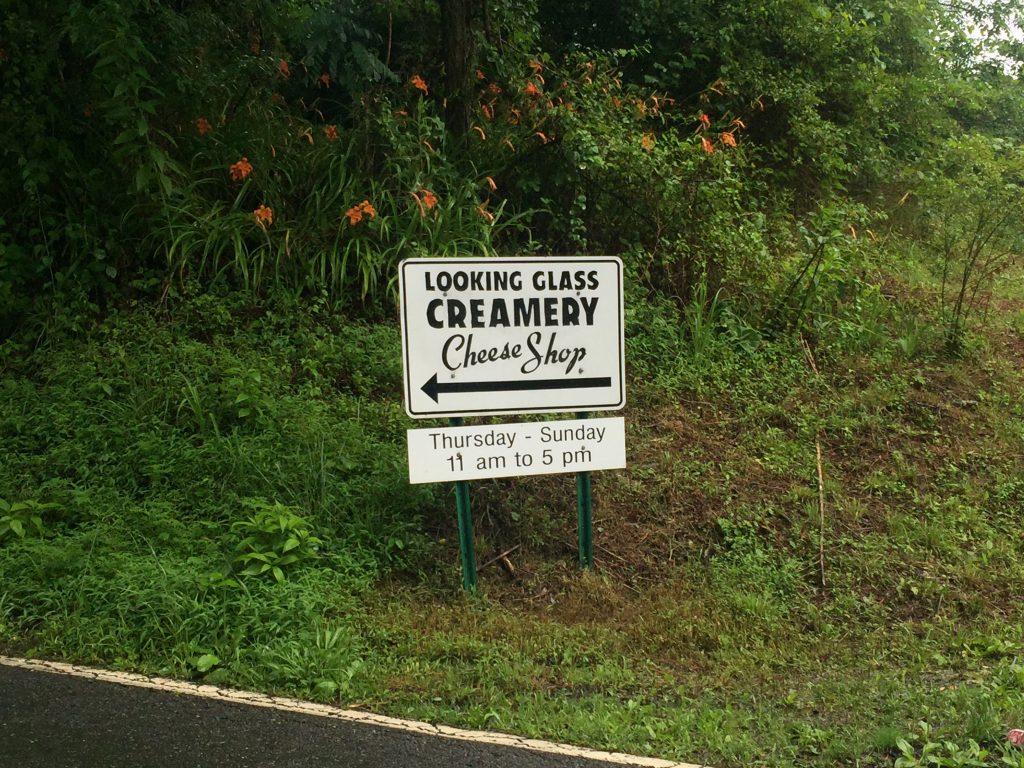 As a side discussion, the question of “American Cheese” came up. Have you ever wondered about this “processed cheese food?” Well, Doris shared with us that it is very easy to melt and it has been confirmed through some quick internet research that it has very low melting point. How is “american cheese” defined? American cheese” is a mild, meltable, and stable concoction of natural cheese bits mixed with emulsifying agents to make, in the language of the law, “a homogeneous plastic mass.” Please Looking Glass Creamery take no offense to us bringing this up in your entry. It was a just a point of curiosity!