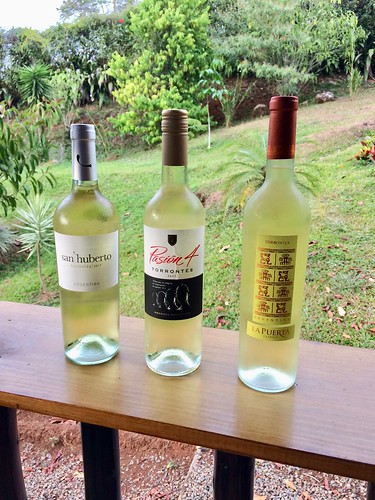 We told you about how much fun we had creating our first home wine tasting so we decided to do another. The wines actually all came from the same distributor in San Jose, CR. It was so much fun to purchase an entire case of new wines to taste! Today’s set of wines are all 2017 Torrontés wines from Argentina. We’ve only tried one or two bottles of this grape before this tasting so we figured it would be interesting to try a few different brands side by side. Do you ever try varietal specific tastings? Let’s see how ours turns out!

Since these wines were all new for us, we took a quick peek at the tasting notes provided to assemble the tasting order. I thought it was pretty funny that they ended up lined up by height. They were all pretty close in alcohol percentage too so it didn’t seem necessary to arrange them in that way. For the point of comparison, I’ll also list the prices of each wine in both USD and Costa Rican colones.

Once we began taking our tasting notes, we decided we should wait until we gathered the notes from all three wines to reveal our flavors and aromas. These wines all had so much to identify and report about. And for some reason that night, my tastes and aromas were coming out of left field, so hang in there for the notes from the following days too. 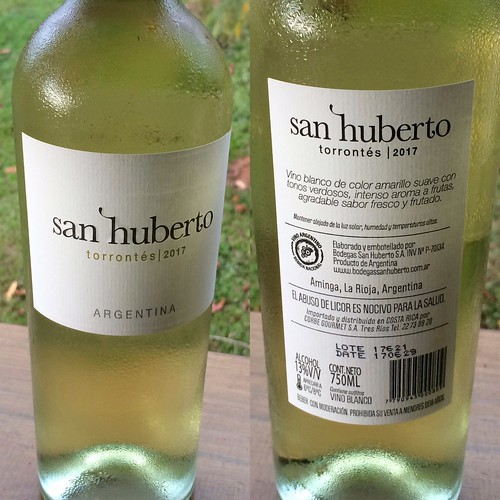 Bodegas San Huberto is located in the Valle de Aminga, which is approximately 1500m above sea level. Being at this high altitude allows for more sun exposure as well as helping to produce a more aromatic wine.

As I swirled the wine, I would agree that this was a wine with many aromas, including honey, lemon blossom and more flowers*, something that seemed like one of the Erie, PA grapes, and then a hint of sweet. Neil found mineral aromas with a hint of butter. For tasting notes, he picked up mineral, a little butter, and some lemon. Once he heard me talking about floral aromas though, he wondered if there was a bit of lily or jasmine as well. My flavors were a bit all over just like my aromas. The wine was crisp, with wood notes, and a juicy acid. It really felt like there was so much going on. I waited some time and revisited this wine and then noticed mineral and lime aromas with a crisp, tart, buttery flavor. 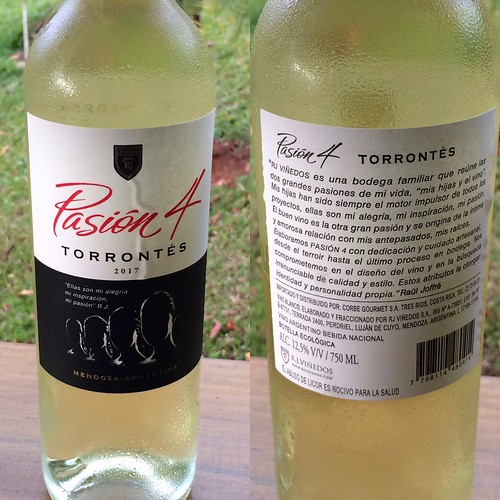 The wine from RJ Viñedos Winery was called Pasión 4 and it had won a Decanter Award so I wanted to include it in our tasting. One thing that made this wine stand out from the others was that it had a screw top instead of a cork. The winery is located in Perdriel, Luján de Cuyo, and has made the switch from being a small family run winery to being exported to 16 countries.

Initially I liked the aromas of this wine better than the first but then my nose went crazy. I found aromas that reminded me of a public restroom. It did seem to improve once I put my nose deep in the glass so maybe there was something going on around our cabin that night? Neil noticed aromas of minerals, earth and citrus. He found the wine to be both round as well as tingling on his tongue. The flavors he identified were a tart lime, minerals and a slight butter finish. He felt this wine was more mellow than the first. I thought the wine was light and both smooth and effervescent. I could feel the wine on the tip of my tongue, it was crisp with some oak softness, and it was similar to Sprite: lemon, lime and bubbly. 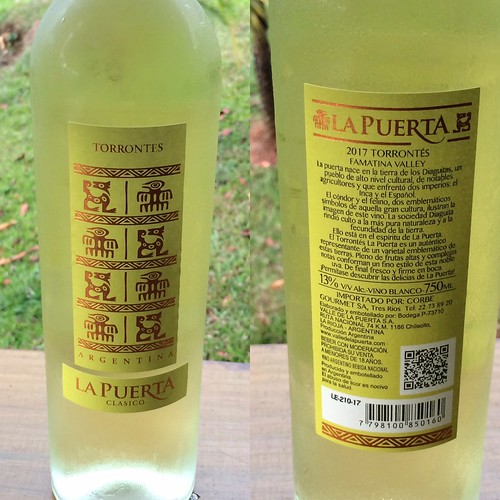 The final wine was produced by Valle de La Puerta, on the lands previously inhabited by the Diaguitas, the peoples of La Rioja. This vineyard is desert-like but allows their specific varietals to thrive and create an intense expression.

Neil noticed citrus and canteloupe aromas as well as a slight musk while I picked up flowers, maybe some peach hiding in there and tart apple. This wine was dry and didn’t seem like there was any oak influence. The perfume flavor moved all around my mouth and filled it with flavor, and then there was a dry finish. Later on, it tasted like oak and popcorn to me. Neil thought this one was rounder than the second wine and very buttery! He also described it as having a slight citrus flavor with melon and a smoky finish. I thought this was the best wine of the three.

Once we had gone through all three wines, Neil felt that I had put them in the correct tasting order and that if they were arranged differently, it wouldn’t have worked. He thought all of the wines were great and said it felt like a proper tasting at a restaurant. I loved hearing that but wondered why my notes were so unfavorable.

Since we had plenty of wine remaining after our tasting, we continued to try the wines throughout the week. I began by having the La Puerta with our Red Snapper, tomato and onion dinner. The wine smelled and tasted more like perfume. I wondered if that was due to the wine being more chilled or because of the ingredients in our dinner.

The next night I tried the San Huberto which smelled like pears and reminded me of Pinot Grigio. It was light, easy to drink and had a dry/mineral finish. The mineral increased in the wine when I paired it with our veggie pizza.

A few more days had passed and I revisited the Pasión 4. The wine aromas seemed to switch from floral to mineral and then back. The wine tingled a bit, had mineral flavors and a dry finish. After having a bite of our dinner, the wine smelled like oak but didn’t change in flavor.

We finished out the week with the San Huberto, which still smelled like lime, was crisp and mineral. It seems we were eating our same meal from earlier in the week of Red Snapper, tomato and onion. The wine really went well with this food but strangely it caused the meal to not taste as good. We had a friend over that night and she agreed that the food didn’t seem as good with the wine.

So overall, was it a good tasting? I’m really not sure. Neil loved it and said it seemed so official. He also really liked the wines. I didn’t like the wines at first but tried to make the best of them. I really do think there must have been something going on during the initial tasting because I can’t believe I would have been smelling or tasting those flavors. I will say that we have enjoyed Torrontés in the past so I should probably add this to my “try again” list. And yes, I’d love to create another tasting at home so we can compare wines with another theme.

*Unfortunately when I notice floral aromas, it makes me think of cleaning solutions. I need to make this change in my mind.