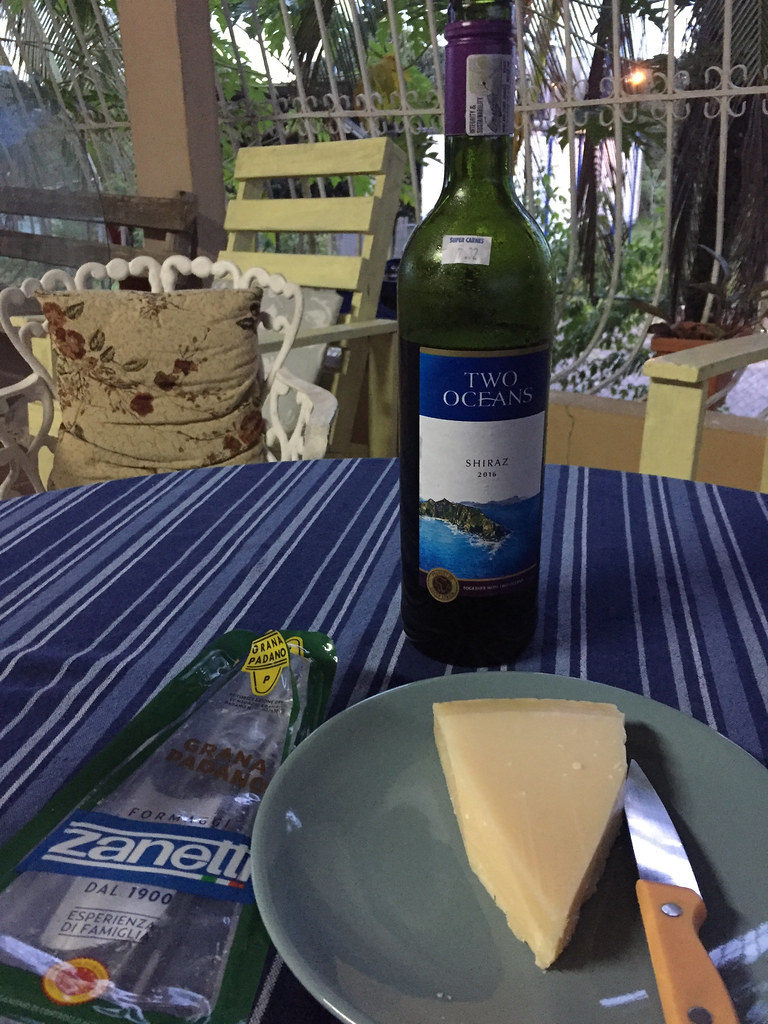 During our time in Costa Rica, I kept coming across a South African wine but never picked it up. Then after we arrived in Panama, I saw one here too and I thought, “Ok I need to get this.” In my continued quest to learn about new wines and regions I thought this would be our first South African wine but then realized there have been a few others. We are ready to learn about a new area, while we are in a new place. Speaking of that new place, Panama has been a place with the challenge of finding cheeses worthy of wine pairings. There’s a lot of cheese but it’s mainly processed grocery store stuff. We need to find a local cheese shop! That being said, this Grana Padano seemed the closest thing to something artisan around here. All we know is that it is an Italian cheese similar to Parmesan. Let’s see how they work together while we enjoy some Wine and Cheese with our new Landlady Pame (PAH may)! 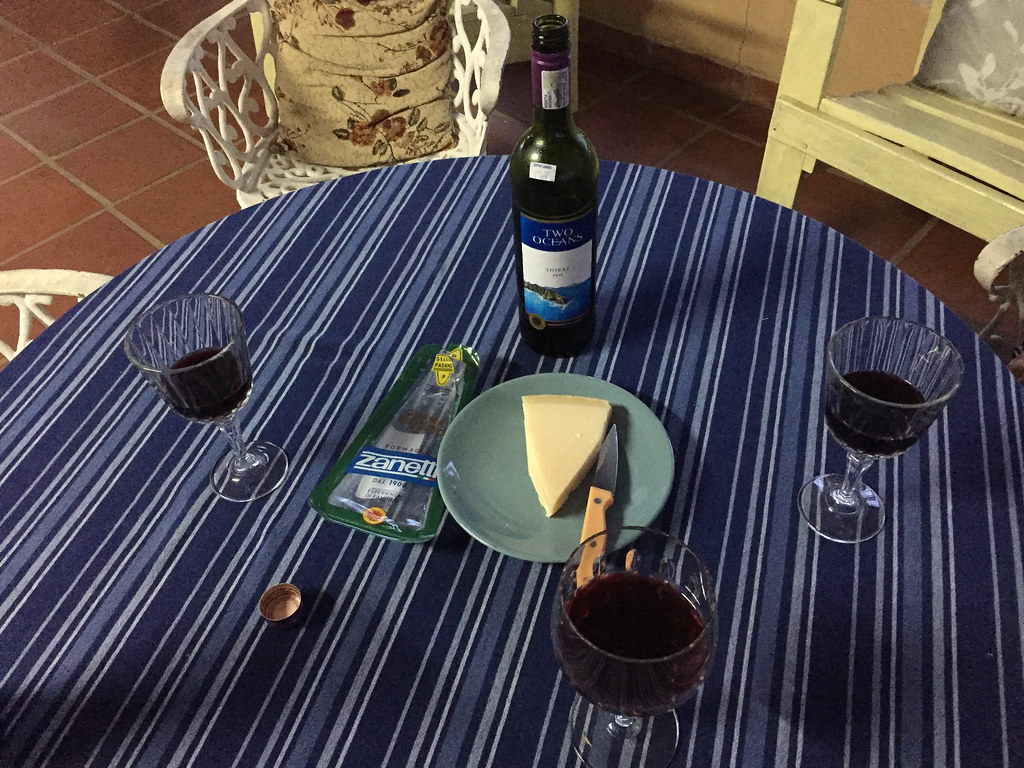 In Panama, we speak Spanish so we not only tried a new wine region but had the experience of Spanish wine vocabulary. When I swirled the wine glass, I noticed earth, smoke and dark fruit aromas. Pame compared the aroma to the smell of Earth during those dry summer months. Yup, I translated that. ? This wine was semi-dry which I think was a bit surprising to all of us since we generally choose dry wines. Neil and I picked up the fruit flavors and found it to be a well-balanced wine. Pame also enjoyed it.

We liked the look of our hard Italian cheese. After her first taste, Pame exclaimed “Fabuloso!” I was certainly happy to find milk and salt aromas and that dry, crunchy texture. Neil thought it was fresh and salty with a light funk, something similar to parmesan. This cheese won us all over although we still didn’t know much about it. Let’s hit the internet! As suspected it is similar to parmesan. They are made in similar parts of Italy but the grana padano is usually less expensive because it is aged for less time and the protected region where it is produced is larger.

As we paired the Shiraz and Grana Padano, I noticed a few changes to both the wine and cheese. The wine smelled like berry, tasted fruity and lighter with a soft texture and spice. The cheese became more dry and then a flavor of strawberry appeared. Neil found more spice in the wine and mellowed fruit flavors. He didn’t notice any new flavors in the cheese. Pame wasn’t too specific about new flavors that appeared but she did like the pairing. I really liked that strawberry flavor from the pairing so I kept tasting them together. You can imagine how disappointed I was when I dropped the remainder of the cheese on the ground! Oh NO, luckily there were only a couple pieces left at that point.

The only thing that could have saved my missing cheese was that Dinner was Served. We had another friend over that was graciously preparing dinner on the grill for us while the three of us enjoyed our wine and cheese. There was even a bit of wine left for us to enjoy with our barbecued treats! What a nice night! 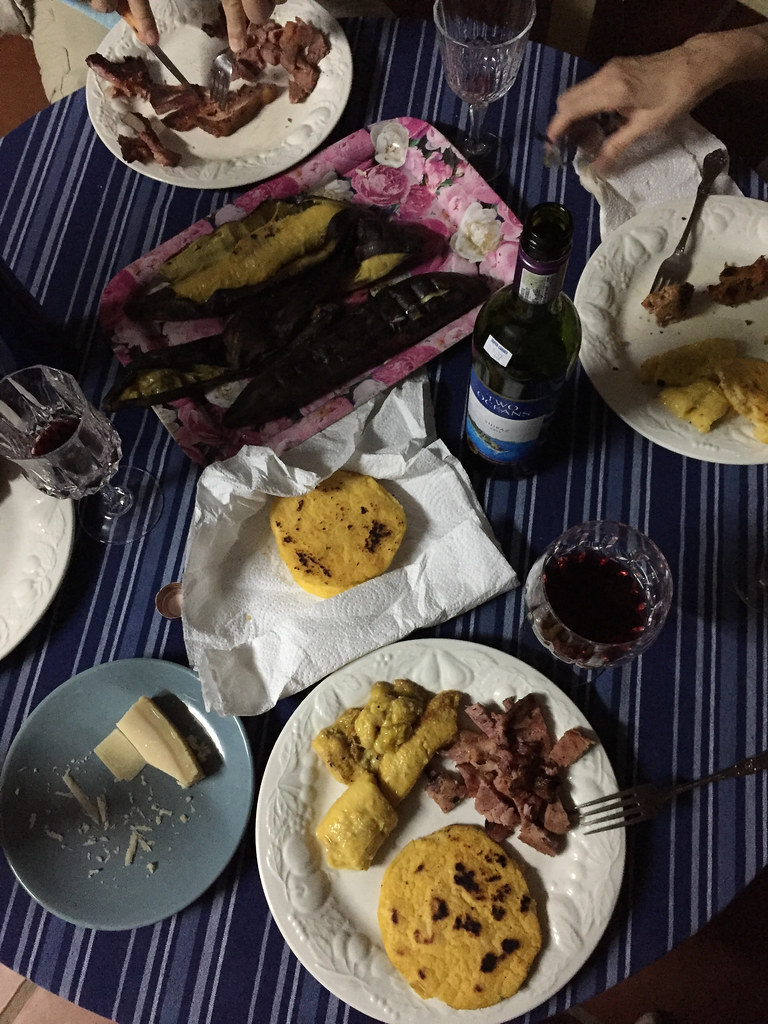