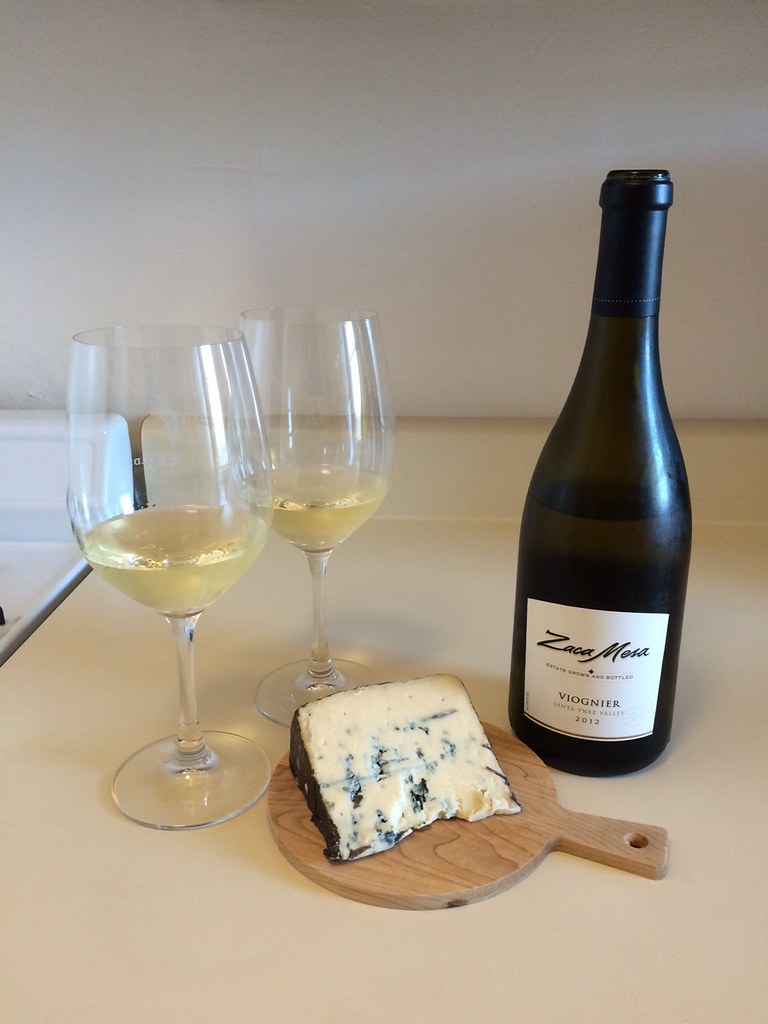 We received this wine as a gift around the holidays. Knowing the usual flavor profile of Viognier, flowers or peaches, I chose a cheese that would probably have some sweetness to it. This cheese, Rogue River Blue, is one that I’ve tried a handful of times and due to it’s seasonal nature, I figured we should seize the day for the pairing. (https://wineandcheesefriday.com/cheese-plus-intimate-and-exclusive-tasting-friday/)

As we looked for dominant aromas of the wine, Neil found the fruit and I noticed the other categories. We had never tried a wine from Santa Ynez so we were curious to see how it could be different.(https://www.google.com/maps/place/Santa+Ynez,+CA/@34.6085764,-120.0959201,10z/data=!4m2!3m1!1s0x80e9540f456b012b:0x9b2373c7ebd3ae2c) Neil identified pear and citrus fruits, as well as some alcohol, rubber, and that it was clean. He also added that it reminded him of an oaky Sauvignnon Blanc but he figured that was due to the citrus. I agreed that it was crisp and clean, with a hint of honey and mineral aromas. There was another aroma that seemed like gasoline, as well. I described the flavors of the wine as tangy with a soft oak, some sweetness, honey and a hint of spice in the finish. Neil continued to pick out the lemon, but agreed with the oak, and still had the lingering alcohol at the back of his throat. He liked the pleasing clean taste. Surprisingly neither of us noticed peach or flowers? Maybe that is how the Santa Ynez wines differ?

During the Rogue River Blue tasting, I was quick to point out the texture of the cheese was both crunchy and creamy! Neil described it as “more creamy than crumbly” with a superb taste. Neil’s “beautiful bouquet of blue cheese” translated for me as salty with a hint of funk. There was also some sweetness in the cheese with a hint of smoke. Neil enjoyed that the cheese was not overpowering. I think this is probably the first cheese that I’ve found the texture to be my favorite part.

When we paired the Viognier and Rogue River Blue, I noticed an initial sweetness in the wine but then more oak. The cheese became a little more tart and funky and the spice in the finish of the wine was magnified. Neil found the oak in the wine to increase also but then a smoky flavor appeared. He said it was the first time a new flavor appeared for him during WineAndCheeseFriday and he thinks it was achieved by letting the cheese melt in his mouth instead of chewing it. He called it a “solid pairing.”