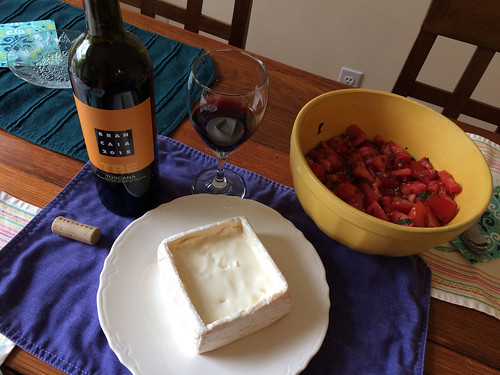 I was on Social Media recently when someone said “Maria, we’d guess that you have some cool chip and dip pairings with wine.” Surprisingly I didn’t so when I saw this cheese at the Durham Farmer’s Market, my gears started turning. What if we used this soft-ripened cheese, that is essentially a dip, with some multigrain chips and turned them into bruschetta? And since bruschetta is Italian, we could see what kind of Italian wine we could find to pair with it. Not quite chips and dip in the traditional sense but we are far from traditional people. We present to you, our version of chips and dip featuring a Super Tuscan Wine, Cottonbell Cheese (by Boxcarr Handmade Cheese) and Italian Tomatoes.

Once we found all our ingredients for the pairing, we got excited to share it with our Durham friends, Jo and Francis. We tasted a Wine and Cheese pairing with them when we visited last year, so we knew they’d have a blast analyzing the pairing. Our pairing was two parts, the first part had all the official notes for the many combinations of chips, cheese, wine, and tomatoes. The next part was finding what else we might gnosh on as a replacement to dinner and we did find a couple nice, unexpected pairings.

Although I haven’t tried many Super Tuscans, I had it in my mind that it should be part of the pairing. Are you familiar with Super Tuscans? They are made from grapes not indigenous to Tuscany which include Cabernet Sauvignon, Merlot, Syrah, Cabernet Franc in addition to the local grape, Sangiovese. Many of these grapes can be found in Bordeaux blends, which I’m partial to so I couldn’t wait to see what we could find here in Durham. Surprisingly it was pretty hard to find and the ones that I came across were mainly Sangiovese with a hint of something else. Knowing that I don’t really like a pure Sangiovese, I was pretty excited to find the other combinations. The one we found, Brancaia Tre, was made of 80% Sangiovese, 10% Merlot, and 10% Cabernet Sauvignon. 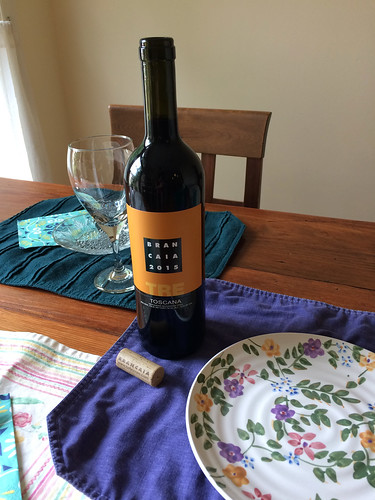 Now onto the wine tasting. Francis swirled and sipped his wine and identified berries. Great job! I also found berry aromas with some earth. My tasting notes were tannins, leather and more berry. Jo really liked it and she picked up flavors that coated her tongue. The flavors were bitter, zingy, chocolatey, smokey and a long finish. Then she tried just a tiny sip and it was very peppery. Neil’s first impression was “Wow, this is a big, dry, Italian wine!” He wondered if that was because of the Cabernet Sauvignon or the Sangiovese? Then he noticed flavors of dark chocolate and bright cherry. Seems like we have quite a range of flavors to see how they change in all our pairings.

The Cottonbell had been sitting out for over an hour, patiently waiting to be enjoyed. Not only does this cheese have to be room temperature, to be all oozy, it also has to be very “ripe!” If you are looking to replicate our pairing, be sure to ask the person at the counter if the one you pick up is ripe and oozy now or if you’d need to wait a week or so to enjoy it. This type of cheese is referred to as “soft-ripened” and it actually continues to ripen as time goes on. We did request a super oozy wedge of cheese when we purchased it so we knew it was what we were looking for. 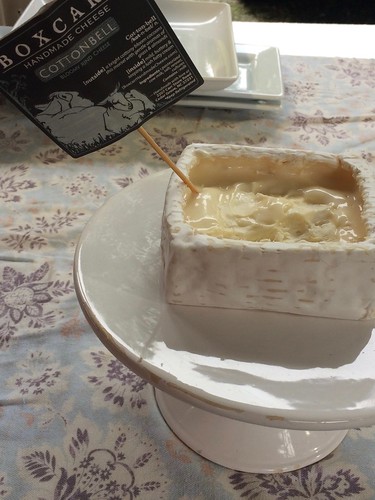 I was surprised that there wasn’t much aroma when I sniffed the cheese but it definitely had flavor! I was able to pick up salt, funk and butter. It was yum! Francis was surprised that this cheese was much saltier by itself than when we paired it with the tomatoes. He liked that the texture was similar to yogurt and did make note of a mild funk. Jo described the flavor as “salty lemon” and Neil concurred. She also mentioned the texture. She said there have been other soft cheeses in the past that were a bit gritty but this one was very creamy and very good. Jo and I both tasted the rind too in order to see how it was. She liked the texture of this too and said it was stronger and funkier than the cheese on it’s own. I could smell the brine wash on the rind and taste it too. It made my nose tingle. 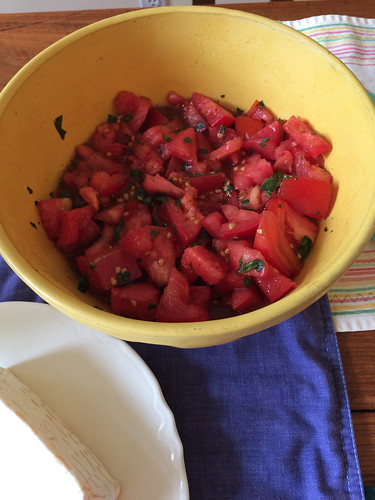 It was time to turn this cheese into a dip! We dipped the chips, topped them with tomatoes, and even had a couple pre-assembled “bruschetta” ready to taste. This tomato mixture was 3 different tomatoes from the farmer’s market, fresh basil, salt, pepper and olive oil, all marinating together for about an hour. Neil tried one of the preassembled ones and liked the combination of all the flavors. It was fantastic! The cheese did seem a little funkier than he expected though. Francis said it was Tasty! I really noticed the flavor of the basil and salt as well as the multigrain aspect of the chip but didn’t really make note of the cheese then. Jo could taste the salt in the cheese more now, it wasn’t as funky though but there was a hint of sour flavors. She really wasn’t thrilled with the mix of tomato and cheese though, she found the combination to make the tomatoes lose flavor.

As I tasted the combination again later that night I made a couple interesting observations. The cheese was funky but then I had a bite of tomatoes and the funk mellowed in the cheese. Then I tasted the tomatoes first and the cheese seemed more funky. I guess it really mattered what order you put them all into your mouth! 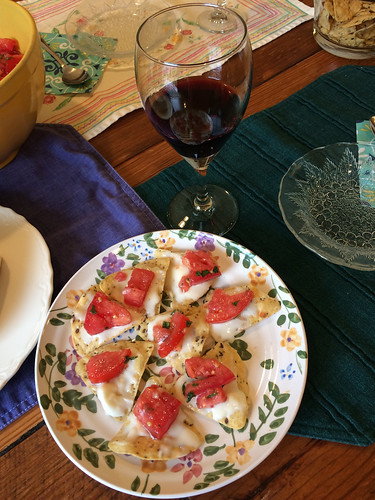 After all these combinations, we still hadn’t paired the wine with all of it, so now onto that. When Jo did the pairing, she was surprised that it made the chips seem very sugary and sure enough, there was sugar as an ingredient. She described the cheese as kind of stringy like melted mozzarella. Francis thought everything together was “lovely” but there weren’t any noticeable changes to any parts when they were all combined. Neil really liked the flavor of the tomatoes and he found the wine to become more berry and spicier. I agree that the wine had more berry after the pairing, as well as being drier, while the cheese seemed more buttery.

Since we were all so excited about all the pairing possibilities, Jo tried the wine and cheese together without any tomatoes. The cheese mellowed the wine and the wine became much less peppery. She also noticed that the wine either by itself, or the wine with the tomatoes but no cheese had a much longer finish. It seemed to be a pretty peppery wine to her!

Our surprise pairing was the Super Tuscan with a fresh raspberry. Francis found the wine to complement the berry flavor but he wasn’t sure if the berry influenced the wine. Jo thought the spice and bitey flavors in the wine went away when she paired it with the berry. I actually though the wine tasted a lot more like chocolate when I had it with the berry.

We had some Zinfandel from another night still open to share and had some strange results then. Francis picked up flavors of melon. Jo thought the Zin tasted like bubble gum and caramel (but it was aged in a bourbon barrel). When she paired this Zin with the rind of the Cottonbell, the wine tasted more like cinnamon. Neil also wondered if they found the wine to be jammy like he originally did and Jo agreed. It definitely should have been since it was a Lodi Zin!

As we wrapped up all our note taking, we sat and enjoyed dipping our chips in the oozy cheese. We ran out of chips so we brought out some salt and pepper crackers. Neil said the pairing with the cracker worked a lot better than the flavor combinations with the chip. The cheese was so delicious, I really didn’t try any of the other snacks on the table. I just sat quietly and enjoyed. We did discuss the pairings overall and maybe we should have skipped the tomatoes. It seems they introduced too many more flavors than just the chips, cheese and wine together. I guess we should have just stuck with the wine with chips and dip? But I know for me, I would still be hungry! 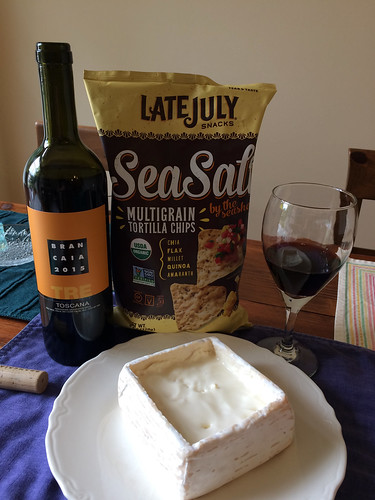