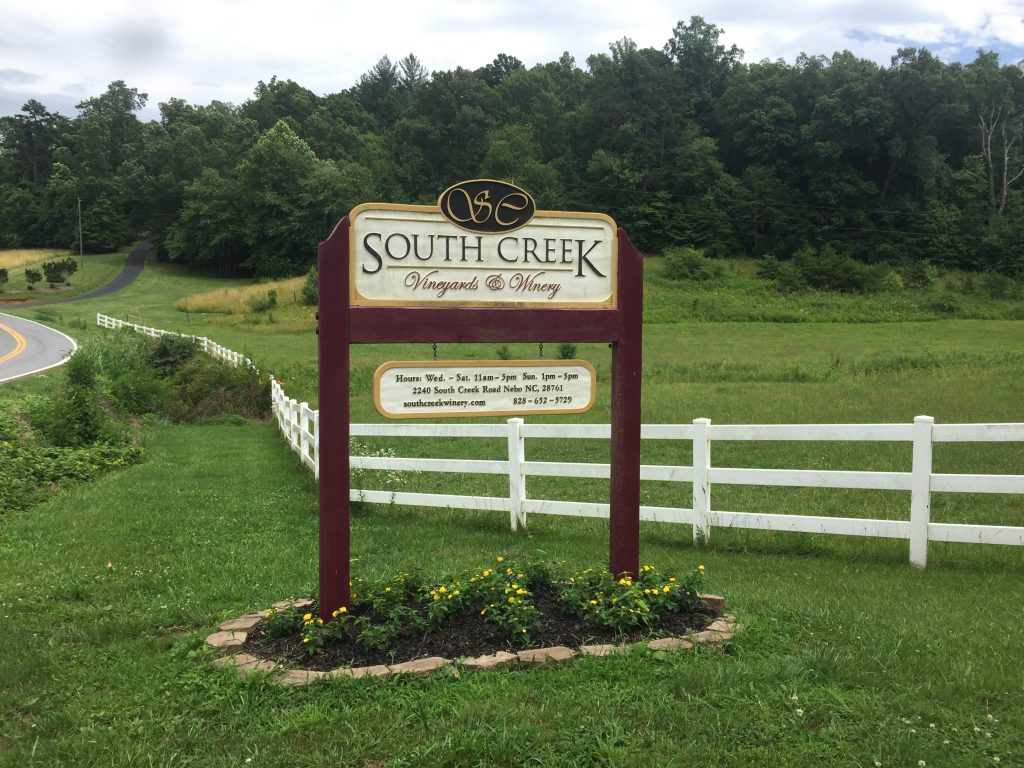 We told you about our visit to the North Carolina Cheese Shop so now we’ll talk about the NC winery. As you know, Neil and I love traveling for wine (and cheese). There’s just so much out there to learn about and taste! We found this winery on the way out to Asheville and it’s the first NC winery we’ve visited. Mary, one of the owners, greeted us in their tasting room. 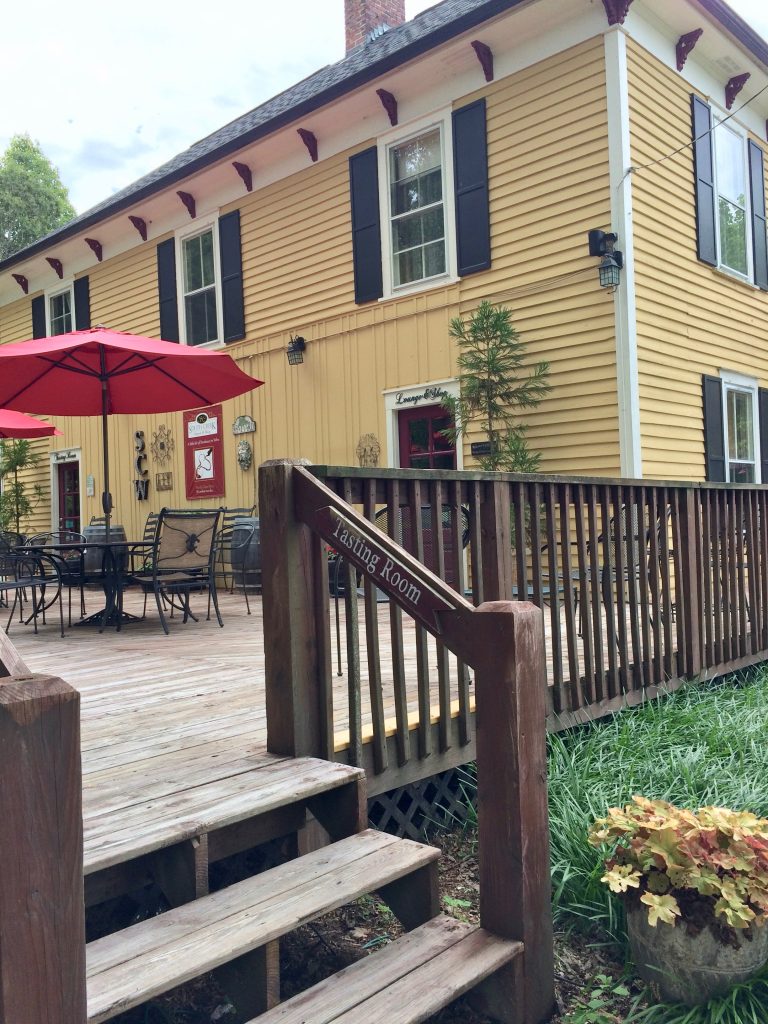 She explained the wine tasting process and how you can try, reds, whites, or everything. Of course, Neil and I split the “everything” option. As mentioned in the cheese entry Doris, was with us too. She’s not much of a wine drinker but decided to embrace the moment and try the white wines. Since we hadn’t been to a NC winery before, I was anxious to hear about their grapes! All of their red wine grapes are grown on the property and the whites are purchased from nearby growers.

So what types of grapes can be grown in NC? On the East Coast of the state, they have muscadine and as you move West, there are French American hybrids. I’m familiar with both of these from when I worked at the FL vineyard but it did get me thinking about what it means to be a “French-American hybrid”? Our grapes at the FL winery had names like Conquistador and Blanc du Bois but here at South Creek Winery, they had Chardonnay, Cabernet Sauvignon, Cabernet Franc, etc. 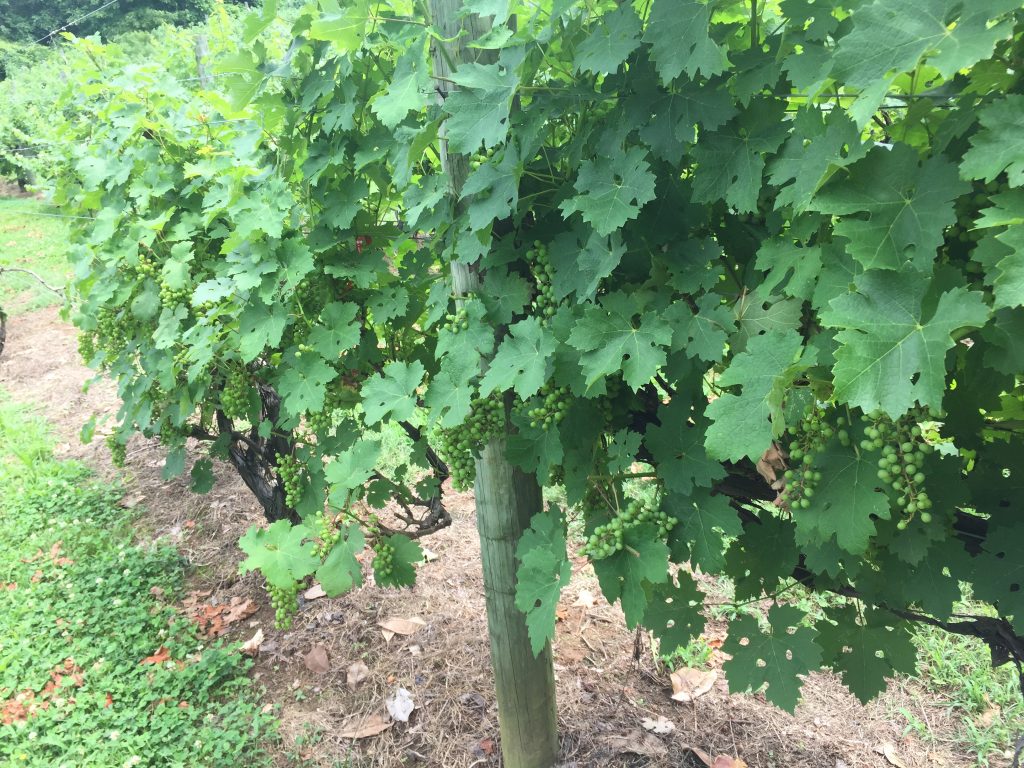 I hit the internet to further research my grape topic. What I found out was that French American hybrids do have those lesser known names like Chambourcin and Vidal Blanc, and have more of a tolerance for cold weather. This made me dive a little deeper to see how we could have been drinking Chardonnay and not one of those hybrid named wines. After about 30 minutes of education, I learned that the wine grapes we are more familiar with fall under the family vitis vinifera and come from France. North Carolina has such a varied climate that it can sustain these grapes too. Thanks to the North Carolina Winegrape Growers Guide for clearing that all up for me. So it seems we were drinking the same grapes that grow in CA, France and around the world.

Glad we learned a little more about that. Now onto our tasting:

Doris was pleasantly surprised as she sipped the Viognier. She thought it tasted smooth, wasn’t bitter and even had a sweetness. I thought it tasted clean and could tell it was influenced by the stainless steel aging. Neil thought the first Chardonnay was easy drinking but on the sweeter side. Doris liked the flavor and couldn’t believe how much less alcohol burn this wine had than any other wine she’s tried before. This was her favorite of the day! The Chardonnay Reserve would be our final white wine in the tasting. For Neil and I, there were caramel, creme brûlée, butterscotch and almond elements to the wine. Doris’s wine tasting glow must have worn off because it reminded her of microbial cheese. She does work as a microbiologist though so that is a common aroma for her. 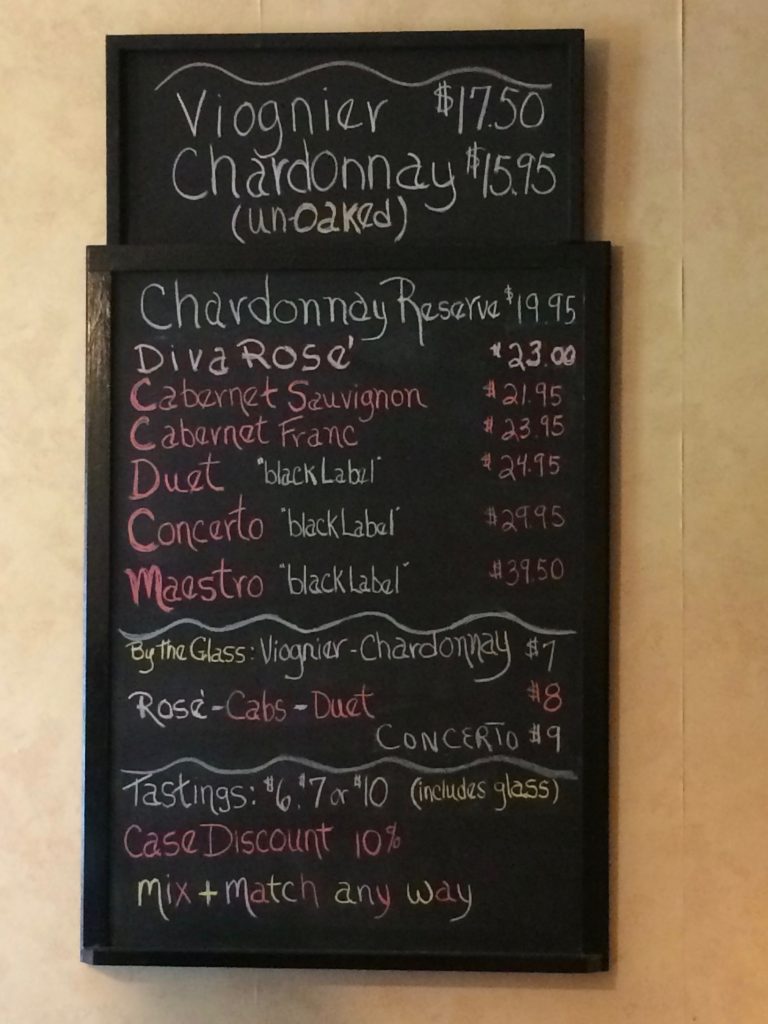 We described the DIVA rosé of Cabernet Sauvignon as cranberry with notes of tartness but also some sweetness too. The Cabernet Sauvignon was very fruity and easy drinking according to Neil. I found it to have a light texture with tar and earth, in addition to the berry flavor. The Cabernet Franc was the most complex of the red wines so we’ll tell you about it later. The final two reds were both blends and when I read the description of the winery, they described their style as “bordeaux wines.” The Duet wine follows that style by combining Cabernet Sauvignon and Cabernet Franc grapes. Neil thought the wine was smooth but we both noticed a distinct cherry sweetness too. The Concerto blend also had a fruitiness with earth and a hint of spice. 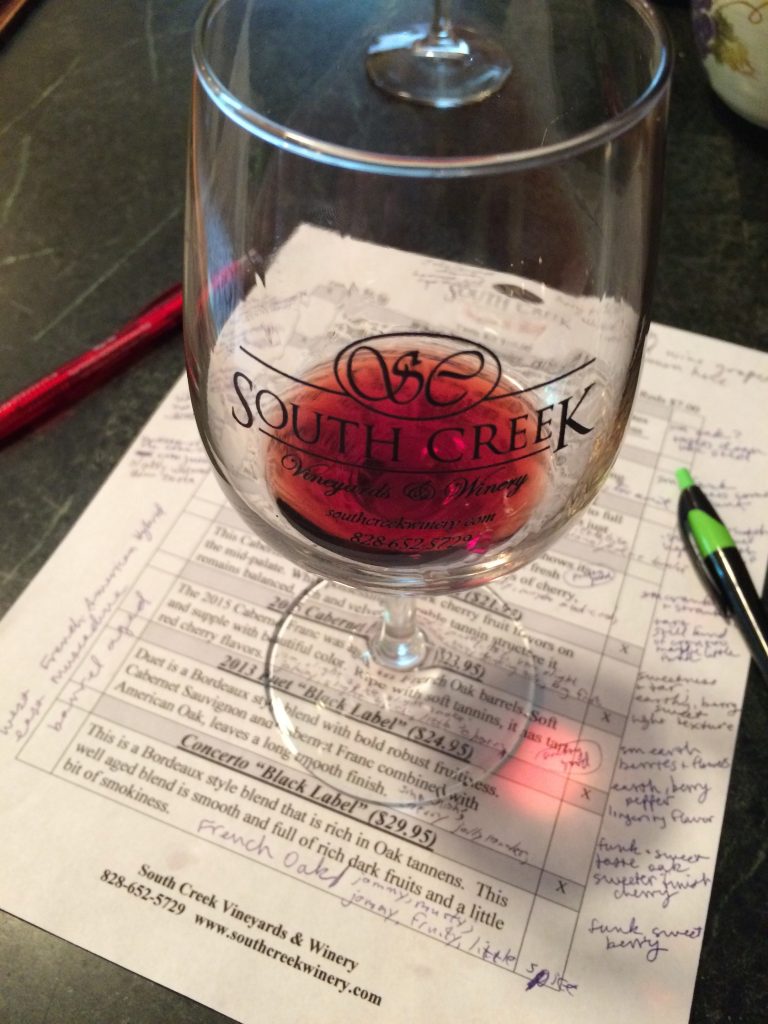 Our timing had gotten a little away from us that day so we only had about an hour to spend at the winery. It was too bad because the vines were so beautiful and they had a cute patio set up to enjoy your goodies. According to their website, they have concerts and a food truck on selected dates too. It was definitely the type of a winery that reminds you that wine comes from agriculture. They even had a big red barn! I wish we would have had more time.

We decided to take home a bottle of the Cabernet Franc and saw that they carried Ashe County Cheeses, a brand we tried last year in Durham, https://wineandcheesefriday.com/vinebox-2-and-carolina-bleu-marble/. We actually liked that specific cheese quite a bit, so we decided to get the Blue Marble again and pair it alongside our NC wine that we just purchased. I even remembered to take a photo of everything together before we left the winery. What a great photo right there in the vines!

I’m glad we were finally able to make it out to a North Carolina vineyard. Last year we found a booklet all about the “Vineyards of North Carolina” but they weren’t near our Durham apartment. Since we had a rental car to head out to Asheville, we knew we’d make it part of the trip. It was really cool seeing how much Doris enjoyed the tasting too. She said this is the first time she’s tried all of the wines in a tasting, and could appreciate them. This tasting also sparked us to learn more about grapes on the East Coast and being the wine nerd that I am, that’s always fun for me too. 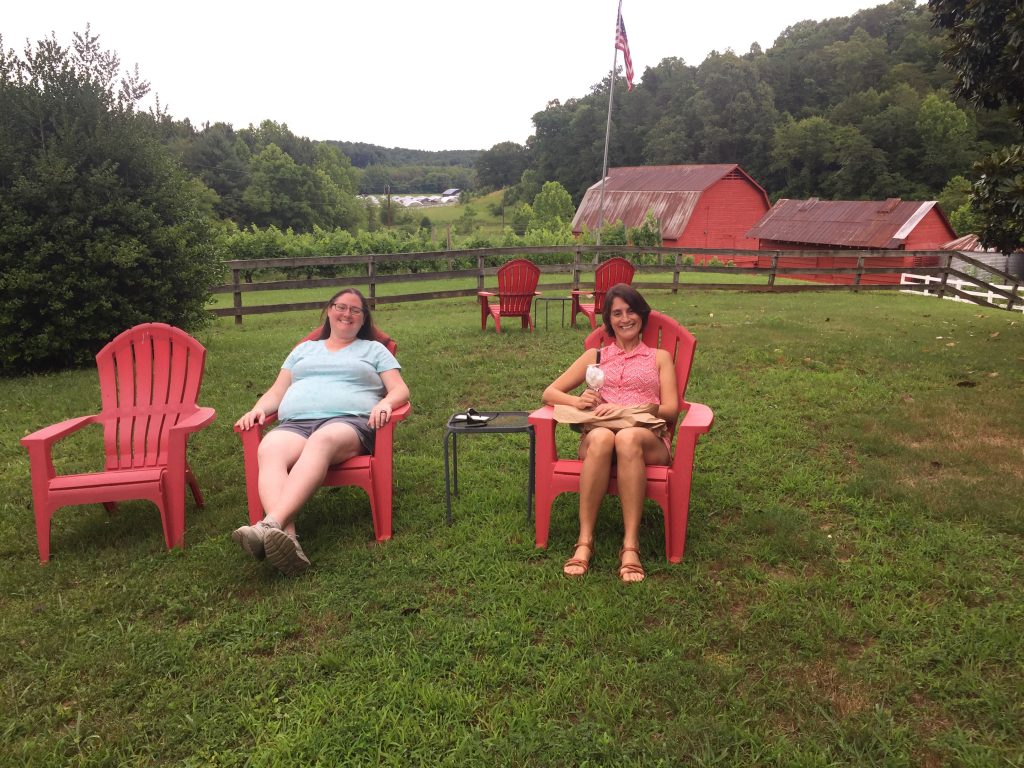