What Is Gouda Cheese? 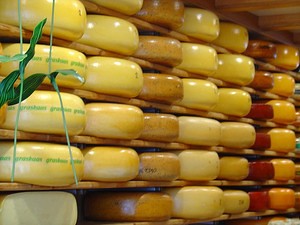 Neil and I love to eat cheese but we’d like to learn more about it. Gouda is one of our favorites and it seems we’ve had it made out of cow, sheep and goat’s milk so what makes it a “gouda cheese” if it isn’t the type of milk?

We also started thinking about the texture of the cheese and sometimes it’s hard and crunchy like in an aged gouda and other times it’s pretty smooth like in a smoked gouda. It could also be coated in wax or not, depending on the specific Gouda.

And the answer is, Gouda, is a city in the Netherlands where the cheese was originally traded! The resource I found specifically said it was not made there, huh. All the cheeses would be taken there to be sold, dating back to the late 1100’s. It was not a protected name, so many cheeses that are made using a specific process are now called Gouda.

The cheese making process involves the cheese being separated into curds and whey, removing the whey, washing the curds (which removes some of the milk sugars) and then being pressed into a mold. The cheese is then soaked in a brine, dried for a few days and coated.

In the Netherlands there were many different classifications of Gouda depending on the length of time it would be aged including Boerenkaas, Graskaas, Jong, Jong belegen, Belegen, Extra belegen, Oud, and Overjarig cheese. I’ve definitely never heard of any of these! Boerenkaas, farmer’s cheese, is a protected cheese made in a traditional manner using unpasteurized Dutch cow’s milk.

We mentioned the texture of the cheese earlier, my research told me that those tasty little crystals in gouda cheese are formed when the cheese ages and the lactic acid is crystallized. Wow, cool science reaction! The opposite of this would point to a younger cheese being smoother without crystals.

Are you still wondering about the wax on the gouda cheese? You may have noticed there are different colors of wax. The color depends on how long the cheese has aged, varying from yellow to red to black for the oldest cheese.

What about those smoked Goudas, how are they different? It has to do with the way they are made, as you may have guessed. These cheeses are placed in a brick oven over flaming hickory chip embers. You will notice that this version of gouda cheese has an edible brown rind. After reading this, I had to find out how the cheese doesn’t melt during the process and I learned about cold smoking, using temperatures under 90 degrees F.

Now that you know more about this famous Dutch cheese, would you like to read about some of our previous WineAndCheeseFriday pairings using Gouda? Make note of the different flavors we found when it was cow’s milk, goat’s milk and sheep’s milk. There’s even a bonus link of when we tasted Gouda Moon Cheese, you’ll just have to read it to see what that is.