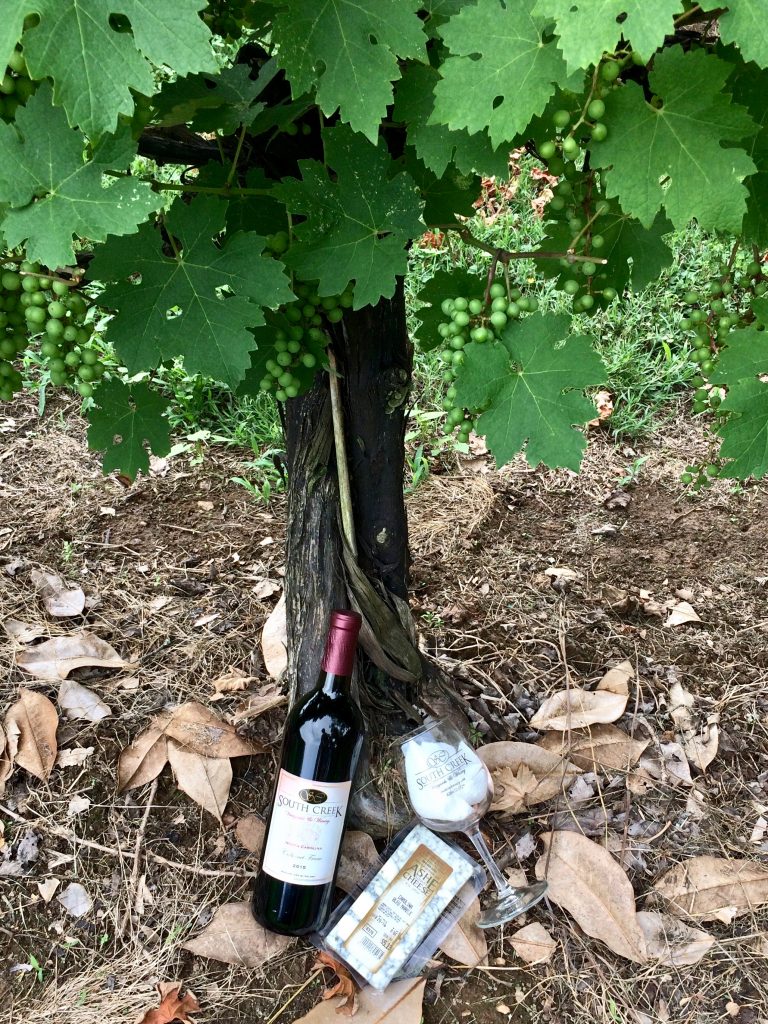 It’s North Carolina Wine Month so let’s celebrate with Cabernet Franc from South Creek Winery in Nebo, NC and Carolina Bleu Marble cheese from Ashe County Cheese, also made in North Carolina. We purchased both this wine and cheese when we made our way out towards Asheville, NC in the summer, https://wineandcheesefriday.com/south-creek-winery-visit-nebo-nc/. This would be our first winery visit in North Carolina so we were anxious to sip the wines.

After going through the whole tasting, we knew that we’d like to try the Cabernet Franc with some cheese at home. Cabernet Franc is one of those wines that I tend to pick up almost everywhere I find it. We’ve actually tried this grape from Pennsylvania, Virginia, Paso Robles CA, Lake County CA, Napa Valley CA, Loire France, blended into Super Tuscans and Bordeaux wines and now North Carolina. I’ll include some links at the end to some of these pairings in case you’re curious about the differences.

First things first though, lets talk about the NC version from South Creek Winery. As I swirled the wine I picked up berry, spice and earth aromas. Neil found the aroma to be cherry cola along with some spice. The texture of the wine seemed spicy to me but there was also a sweet earth flavor that seemed hard to miss. I wonder if it was the flavor from the barrel? Neil noticed red fruits such as cherry, a hint of spice in the finish and a jammyness that reminded him of a Zinfandel. 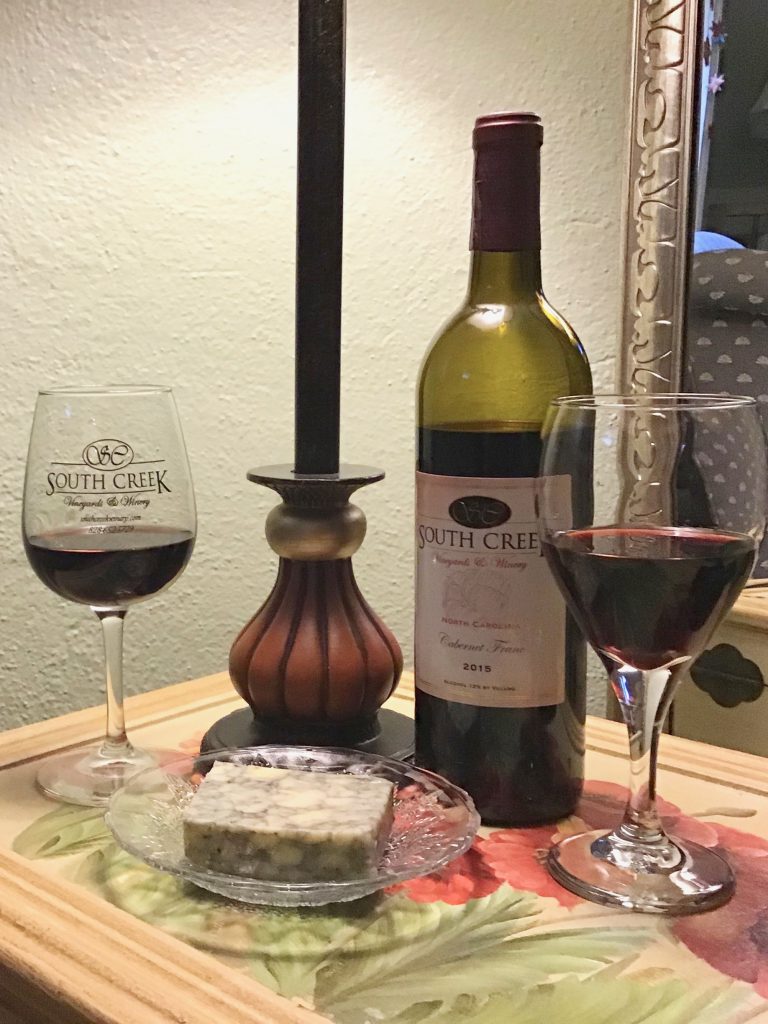 We’ve tried this cheese before, perhaps you recognize it from one of our Vinebox pairings? We remember liking it so we figured we’d try it alongside a NC wine this time around. There’s no doubt that this is a blue cheese but when I smelled the cheese, it seemed more like a smoky cheddar with a hint of funk. Neil took a sniff of the cheese and began chanting “oohhmm!” He said it smelled like a lighter blue cheese with a little bit of salt but definitely a good aroma! He thought the texture reminded him of Monterrey Jack but it was not crumbly like he expects from a blue cheese. It was smooth, no doubt. Although I questioned the aroma of the blue, it did taste blue, like penicillium, and it coated the tongue. Neil must have had Monterrey Jack on the mind because he said the cheese tasted more like Monterrey Jack with blue mixed in.

During the pairing of Cabernet Franc and Caroline Bleu Marble, I thought the wine smelled richer and had less earth. The earth was gone from the flavor too with a big spicy finish and some berry. I liked it better, but then the sweet earth flavor came back. The cheese felt lighter on my tongue but had the same flavor. There could have been a hint of ash too? Neil didn’t find the cheese to change much during the pairing but the wine became more tart and spicy. The spice lingered too, he liked it. I paired them a second time a few minutes later and the wine had a flavor of vanilla appear. Yum. So that’s two votes for the pairing. Wow, that doesn’t happen often that we agree on WineAndCheeseFriday pairings!

I told you we’ve tried a number of Cabernet Franc wines but it got me wondering why this would taste so different than those California versions that I’ve tried. Sure there’s different terroir, winemakers, rainfall, altitude, but I wonder if there’s even different clones of Cabernet Franc grapes. Let’s hit Wikipedia for a little research!

Cabernet Franc can thrive a little better in cooler climates than it’s offspring Cabernet Sauvignon. Oh wait, you didn’t know the two grapes are related? Read about that on Dracaena Wines blog. It seems the grape can adapt to a bunch of different soil types but it does prefer sandy, chalk soils. We mentioned that we’ve tried the grape from VA and PA and it seems it is grown in those areas because it’s a red grape that can ripen more reliably than other vitis vinifera or hybrid grapes in those regions. Also during my research, I found that it is the fourth most widely planted grape in Washington State. Hey wait, I tried that WA blend with Cabernet Franc during the WiningHourChat!

Since I didn’t find anything about the differences in flavors, I also hit Enobytes for a little more information. They have a terrific compilation of different areas where this grape is grown and lots of more science-y details of the grape. They did clarify though that the weather does have a huge impact on the aromas and flavors of the wine. They suggested that California, being on the warmer side, will create a more bold Cabernet Franc. If you want more specifics, they have a ton of flavor profiles for Cabernet Franc around the world.

Glad I was able to take the time to learn a little more about a grape I enjoy so much. And how can I resist trying the blue cheese from Ashe County Cheeses. One of my favorite parts about it is that I always make a summer salad with my left over cheese. Its so good! You should definitely try to find it, https://www.ashecountycheese.com/shop/8-oz-carolina-bleu-marble/. 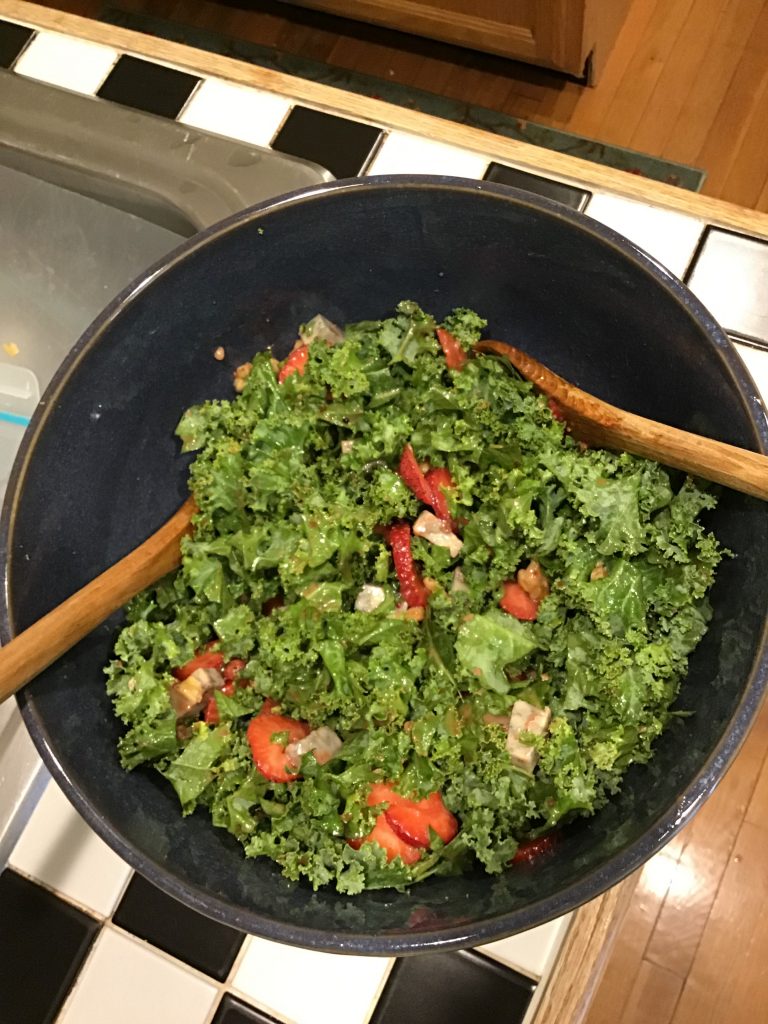